NGC 4911 is one of the few spirals in the Coma Cluster. Due to interaction with NGC 4911A to the southwest, the galaxy is surrounded by a huge faint plume of stars pulled from it. Other galaxies in the cluster have similar large plumes around them such as the red disk galaxy NGC 4919 about 5 minutes east-northeast of NGC 4911. The HST has taken the best image of this galaxy and has a more complete discussion about it. If you have decent internet service ignore the warnings and download the \"highest-quality\" image, about 15 megabytes in size.
http://hubblesite.org/newscenter/archive/releases/2010/24/image/

The largest and brightest spiral in the Coma Cluster is NGC 4921. It is rather red and the arms rather indistinct as star formation is very low in this galaxy. Likely collisions and encounters with smaller galaxies in the cluster has stripped it of most of the dust and gas needed to fuel star formation. Star clusters often kill galaxies as the constant close encounters and mergers disperse the dust and gas that would fuel star formation. Spread around the core of the cluster it is too hot to condense to form more stars or galaxies. Maybe in billions of years as the galaxies in the cluster cool and die this dust and gas will cool and condense sufficiently to create more galaxies. Or will the radiation of the first stars to form disperse this gas preventing and further star formation? A more complete discussion and false color image of this galaxy by the HST is at:
http://spacetelescope.org/news/heic0901/
The orientation is similar to mine being rotated a bit clockwise from north at the top.

Containing over 1000 galaxies the Coma Cluster -- Abell 1656 is the largest, richest \"nearby\" galaxy cluster being about 320 million light-years away. It is anchored by the two huge elliptical galaxies, NGC 4874 and 4889. NED puts the long diameter of NGC 4889 at 2.8 minutes of arc. That would make it about 260,000 light-years across. In December 2011 it was announced this galaxy is the home of the largest known black hole with a mass of 21,000,000,000 solar masses. Though the error bar for this is huge ranging from 6 to 37 billion solar masses! NGC 4874 is nearly as large but apparently doesn\'t harbor a record-smashing black hole. It has another number 1 claim. It has 30,000 globular star clusters. Though, many, like some around our galaxy are now thought to be the cores of dwarf galaxies it has been \"feeding\" on for the past few billion years. The stars were stripped from all but the cores of these dwarf galaxies leaving something that looks much like a typical globular cluster, only larger.
http://www.spacetelescope.org/images/potw1138a/
To confuse this globular issue a note at NED reads: \"The power spectrum for NGC 4874 is clean and the fit is very good. NGC 4874 has a normal globular cluster population.\" http://iopscience.iop.org/0004-637X/550/2/503/pdf/52870.web.pdf (page 520)
I\'m not sure how you reconcile these two statements.

Obviously, doing one of my typical annotated images would be a masochistic nightmare. Instead, I did note all NGC, IC and CGCG, KUG and GIN galaxies. Distance was not noted as all are at members of the cluster so are about the same distance from us. I left out several hundred of 2MASS and Sloan Survey cataloged galaxies. I also saw over one hundred very distant galaxies listed. I decided to mark those over z=0.5. Then I ran into a problem. Most were from a catalog listed as [ANM98]. After trying to locate 10 of them without success I gave up. NED lists their position as uncertain. But does indicate they should be in a 30\" error circle. With so many galaxies in such a small area, a 30\" error circle made identification impossible. There was no explanation for this huge error bar. One from the Sloan survey at 5.9 billion light years and fainter than nearly all of the unidentifiable galaxies was easily found under NGC 4874. I did mark that one.

Normally I\'d go into who discovered these many galaxies and when but there are just too many. I covered some of them in the ComaCluster post. You are on your own for the others. 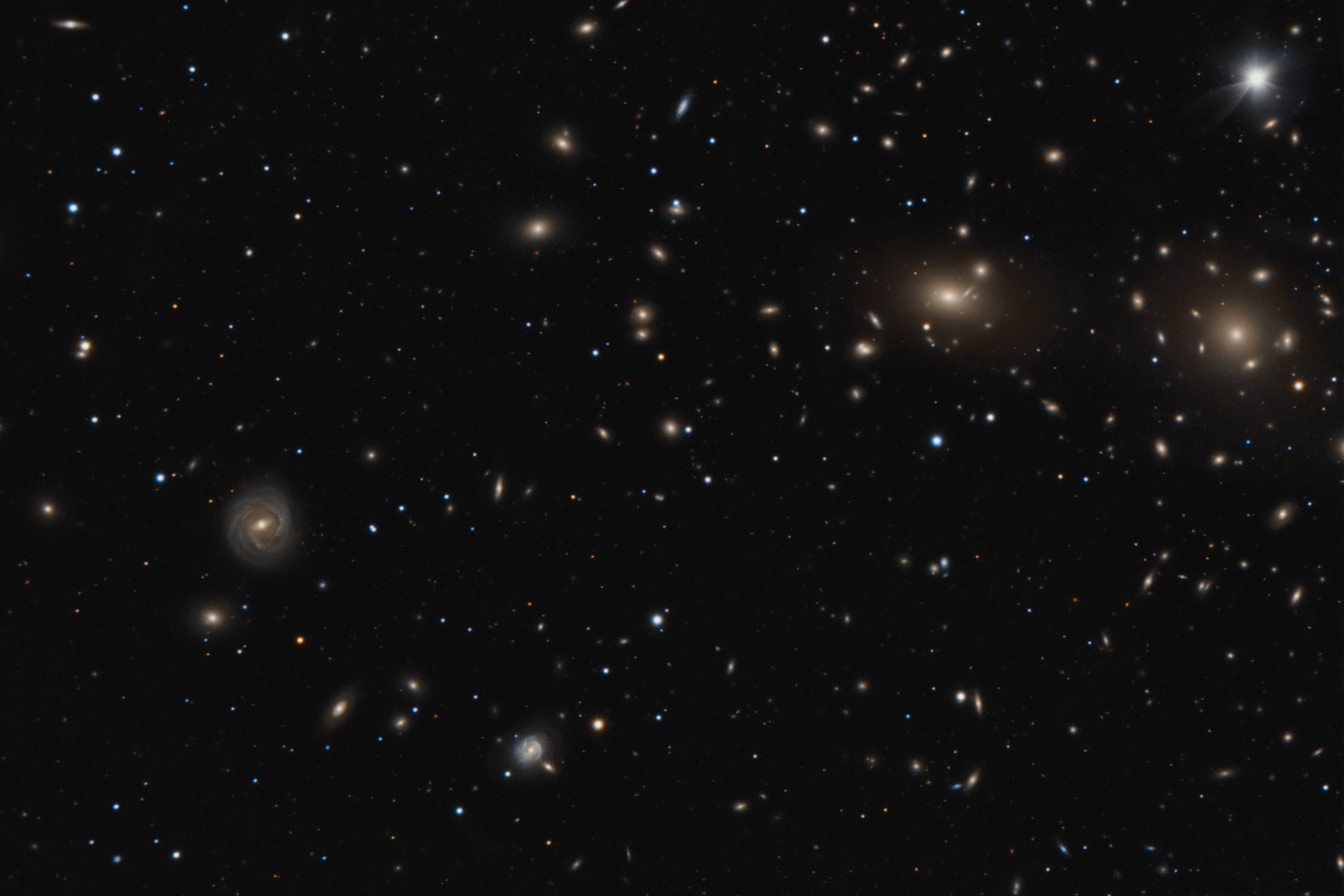 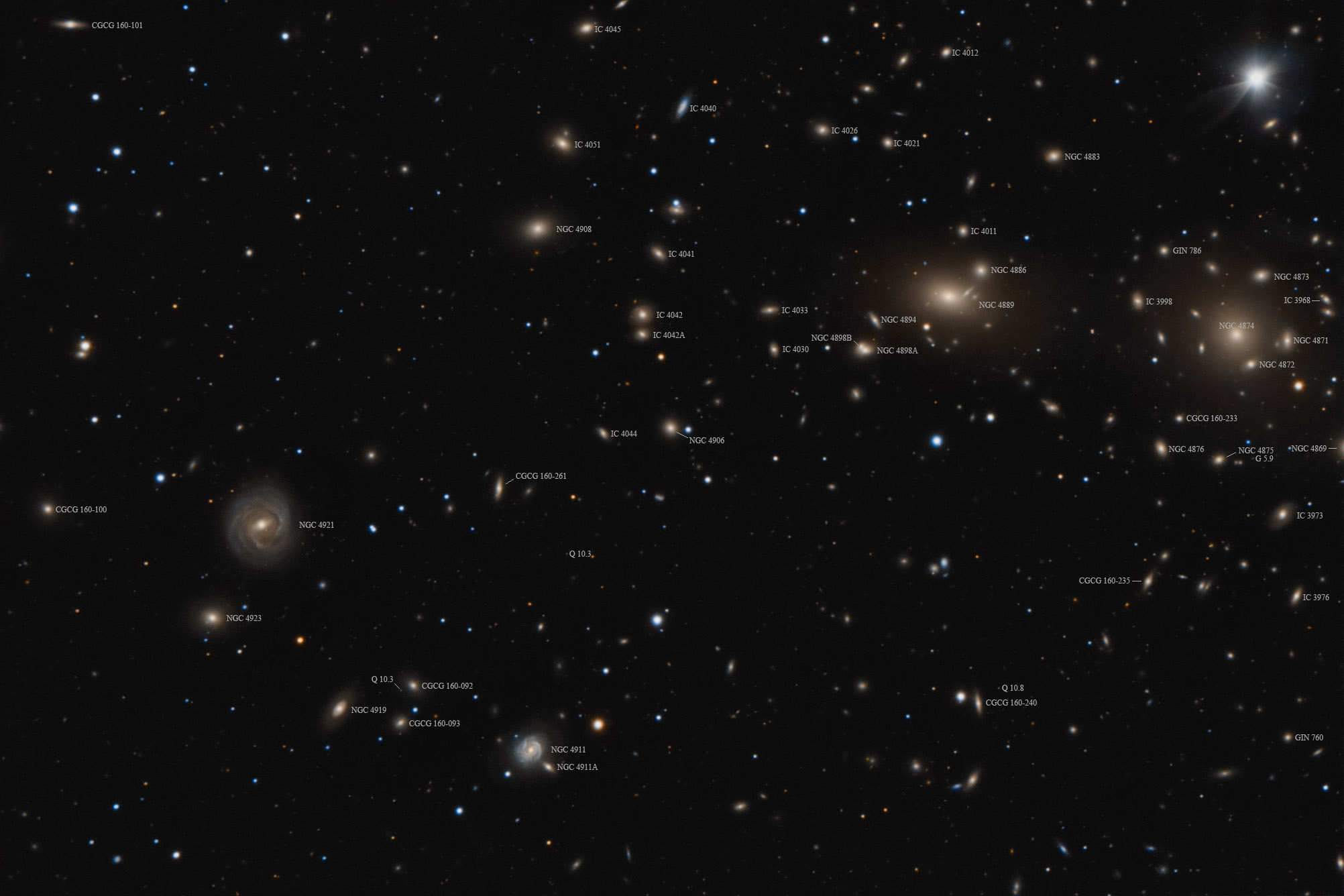