NGC 4922 is a pair of colliding galaxies on the northern edge of the Coma Galaxy Cluster that Arp didn\'t include in his atlas. Some papers see three galaxies here but most see only 2. NED shows no object at the position of the middle galaxy of the three. Nor can I see anything there in the Sloan image though that is overexposed. No matter how I stretch my image is anything seen at the middle galaxy\'s position: 13h 01m 24.67s +29d 18\' 33.0\". I\'m only going to address the two seen in my image.

The southern galaxy is listed by NED as Sb Sy2. How you get Sb out of that mess I don\'t know. Likely that\'s a good estimate of what it was before the collision. It does have a nice blue plume to the south but otherwise is surprisingly red in color. The northern galaxy is listed at NED as S;HII;Sy2 LINER. That\'s a lot for that little guy. The NGC project has a classification of E0 for NGC 4922. I can\'t tell if that is for one of them or both or what. In any case that\'s quite a difference of opinion. The Seyfert classification of both is likely due to the black holes being well-fed thanks to the collision in progress. The strong red color of both would seem to indicate there\'s been no star formation in these guys except the outskirts for a few billion years. Something seems to have stopped star formation long ago. The plume, however, is very blue so has new stars. The pair was discovered by Heinrich d\'Arrest on April 19, 1865.

Several other Coma Cluster members are in the image, many are small and many have very low surface brightness. For that reason, I labeled by name those that appear likely cluster members. The big ones have IC numbers or an MCG listing. The rest have rather obscure and usually quite long catalog names.

While the cluster with the common name of Coma Cluster is Abell 1656; a much smaller, in angular size at least, Abell 1661 is also in the image but instead of being about 330 million light-years distant like the famous Coma Cluster, it is 2 billion light-years away and can be found in the lower part of my image a bit left of center. Right below it is a pair of galaxies, one a member of the Coma Cluster (famous one) and the other a much more distant galaxy though they do look like they are very close together they are some half billion light-years apart.

Several other distant galaxy clusters are in the image if the distance to the anchoring bright cluster galaxy is different than that of the cluster by redshift measurement I list both with the cluster\'s distance first. If the distance has a \"p\" after it it is photographically determined which carries less accuracy than spectroscopic distances. If the BCG has a spectroscopic distance that is likely the more accurate of the two.

I was rather surprised to find only about 3 quasars in the image. 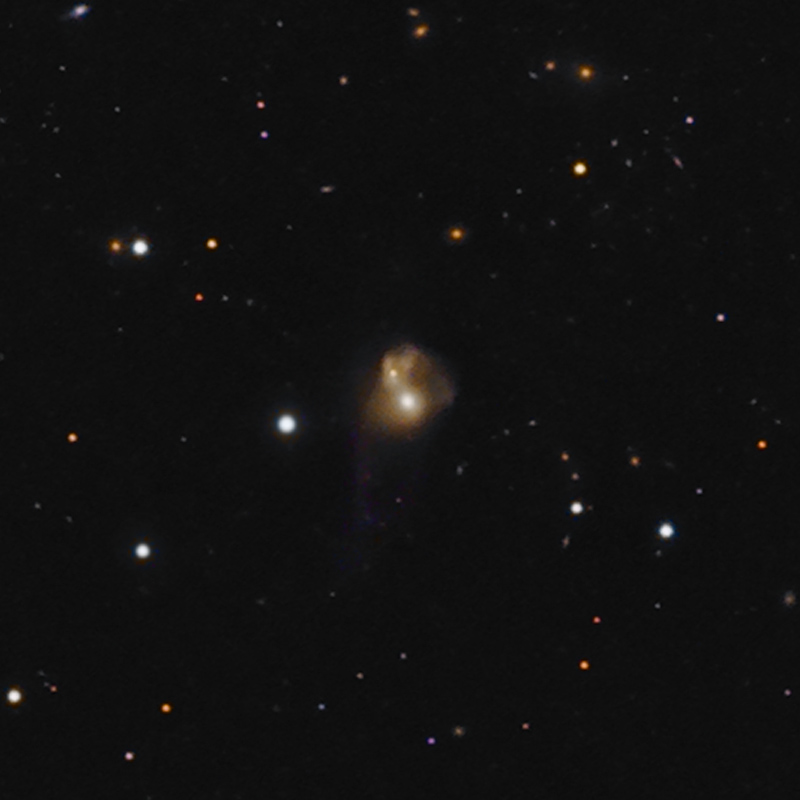 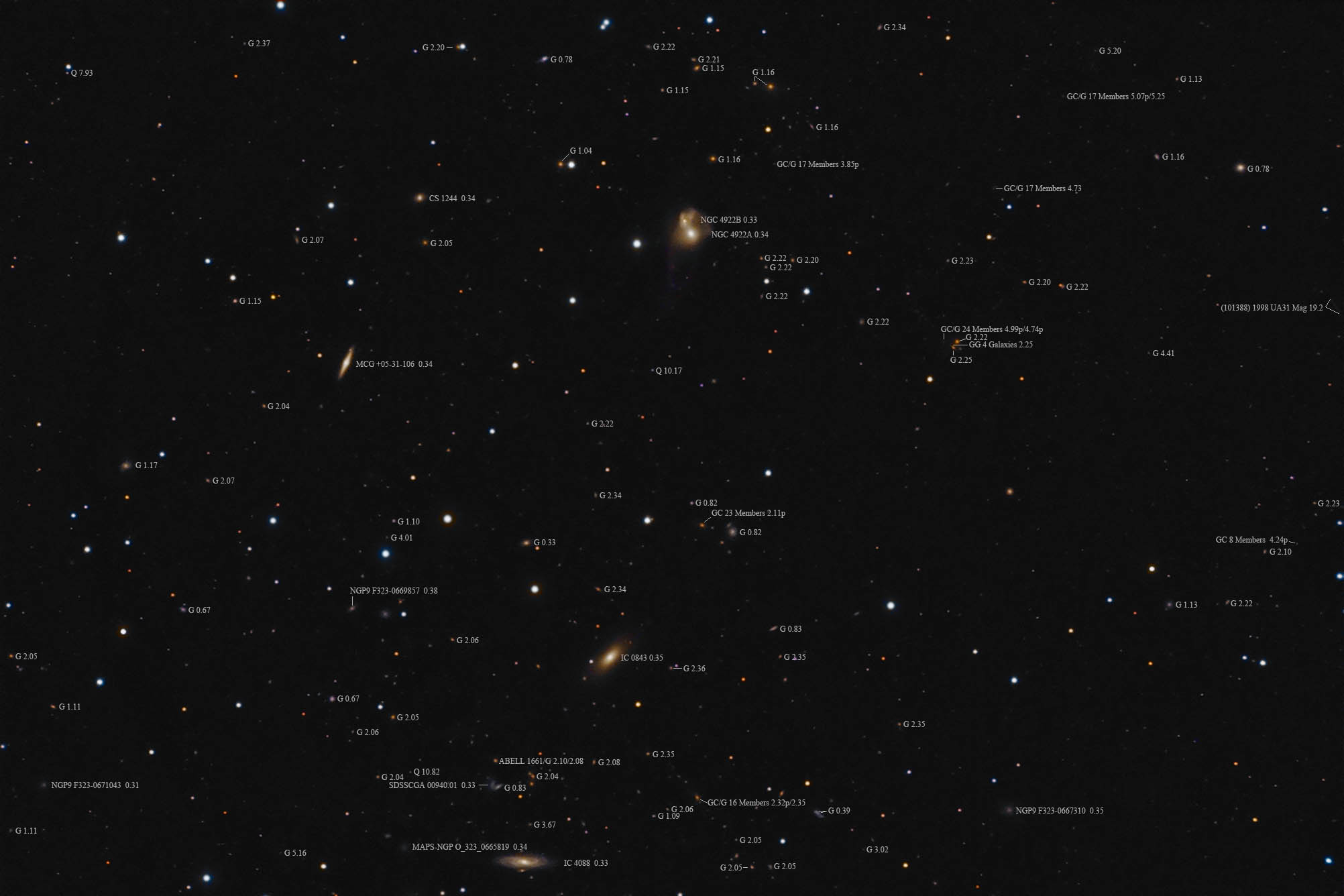 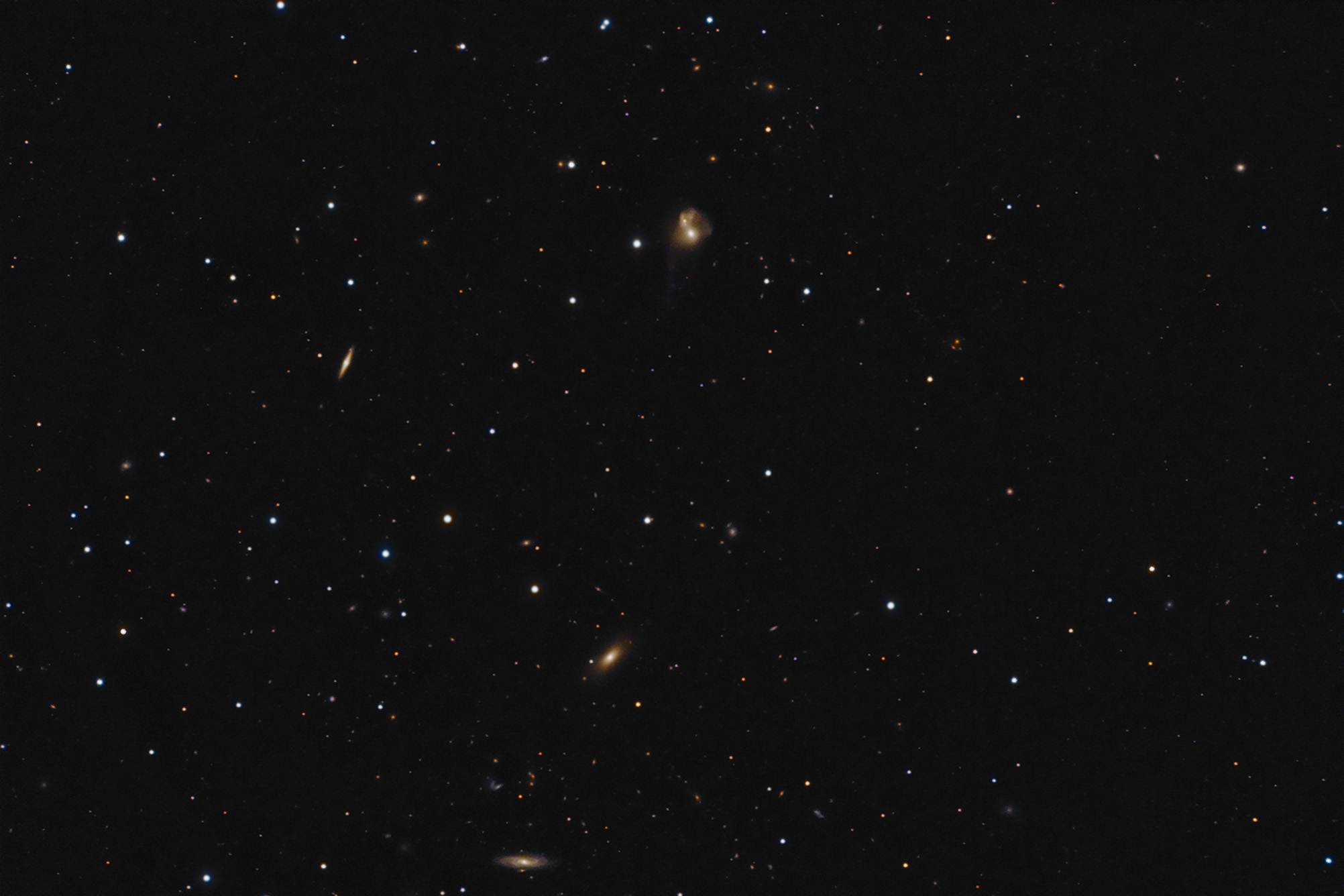