The NGC 4958 galaxy group is a small group of galaxies in Virgo, 4 of which are in my image. All share a somewhat similar range of distances in mostly the 60 to 80 million light-year range. Though if you stick with just redshift or just non-redshift distance measurements they are somewhat scattered values with some having higher non-redshift distance and others higher redshift values. They may be outlying Virgo cluster members. I\'m going to arbitrarily pick 70 million light-years as an approximate distance to all 4.

NGC 4958 is a rather red SB0 galaxy indicating little recent star formation. It was discovered by William Herschel on March 3, 1786 and is in the original Herschel 400 Observing Program. My entry for it from April 23, 1985 with my 10\" f/5 scope reads: \"Conditions poor with fog. Round nucleus with an oval halo. Center seems complex but seeing too poor to see much.\" I was going to revisit it but like my reimaging of objects I could have done better, that didn\'t happen either. Assuming the 70 million light-year distance it is about 115,000 light-years across.

The only other NGC galaxy in the frame is NGC 4948 which may or may not be IC 4156. It was discovered by Lewis Swift on May 25, 1897. Later DeLisle Stewart using an early Harvard image plate recorded 4 objects. There\'s nothing at the positions of any of them. These 4 were included in the IC catalog. With some assumptions about his error for objects he noted as extremely faint on this early plate the one for IC 4156 may be NGC 4948. The plate still exists but apparently, no one has gone back to examine it and determine what it shows. NGC 4948 is a rather red barred spiral classed as SBdm. There are some blue regions but mostly it is a rather dead galaxy like NGC 4958. It is about 43,000 light-years across.

At the bottom of the image is DDO 162. It is somewhat brighter than DDO 163 but smaller being only 26,000 light-years across. It is often listed as NGC 4958A though not in the NGC. It\'s the bluest of the bunch and appears to be a rather active galaxy.

Only one other galaxy in the image had redshift data at NED but it lies some 1.19 billion light-years away so is unrelated to the other 4. While there are a lot of other galaxies in the image I couldn\'t find much on them. I\'d not have prepared an annotated image but there were some very faintly seen asteroids in the frame so I did prepare one to help you find them. Since I did I included a few brighter galaxies without redshift data as well as one very low surface brightness galaxy listed in NED as simply a Uv Source with its GALEX coordinates for an ID. NED doesn\'t even list it as being a galaxy though it obviously is one. NED lists several dozen more as IR sources from the 2-micron survey that I didn\'t bother to annotate. A handful carry extended PGC designations NED doesn\'t carry. When I asked several years ago why they said it was too unreliable and all are covered by other catalogs they do carry. Since many catalogs they carry duplicate others I\'m not sure I understand that explanation. This was many years ago, maybe I should try again and see if that opinion has changed.

The night I took this image was very poor. Clouds were constantly blocking the view. Notice the asteroid trails are much fainter than normal for their magnitude and fade in and out, vanishing totally at times. Things got so bad one green frame was virtually lost to clouds. Only about 6 stars can be seen plus the core of NGC 4958. I had to throw that frame out. My color balance is a bit suspect thanks to these clouds but appears about right. There were several other asteroids in the frame that would normally have been seen but due to conditions were not visible even in the FITS files no matter how hard I stretched them. If I relied on guiding I\'d have lost the guide star many times resulting in not one usable frame. Another reason why, if the mount can do it taking the time to set it up for unguided imaging can pay big dividends, especially when running under automation. 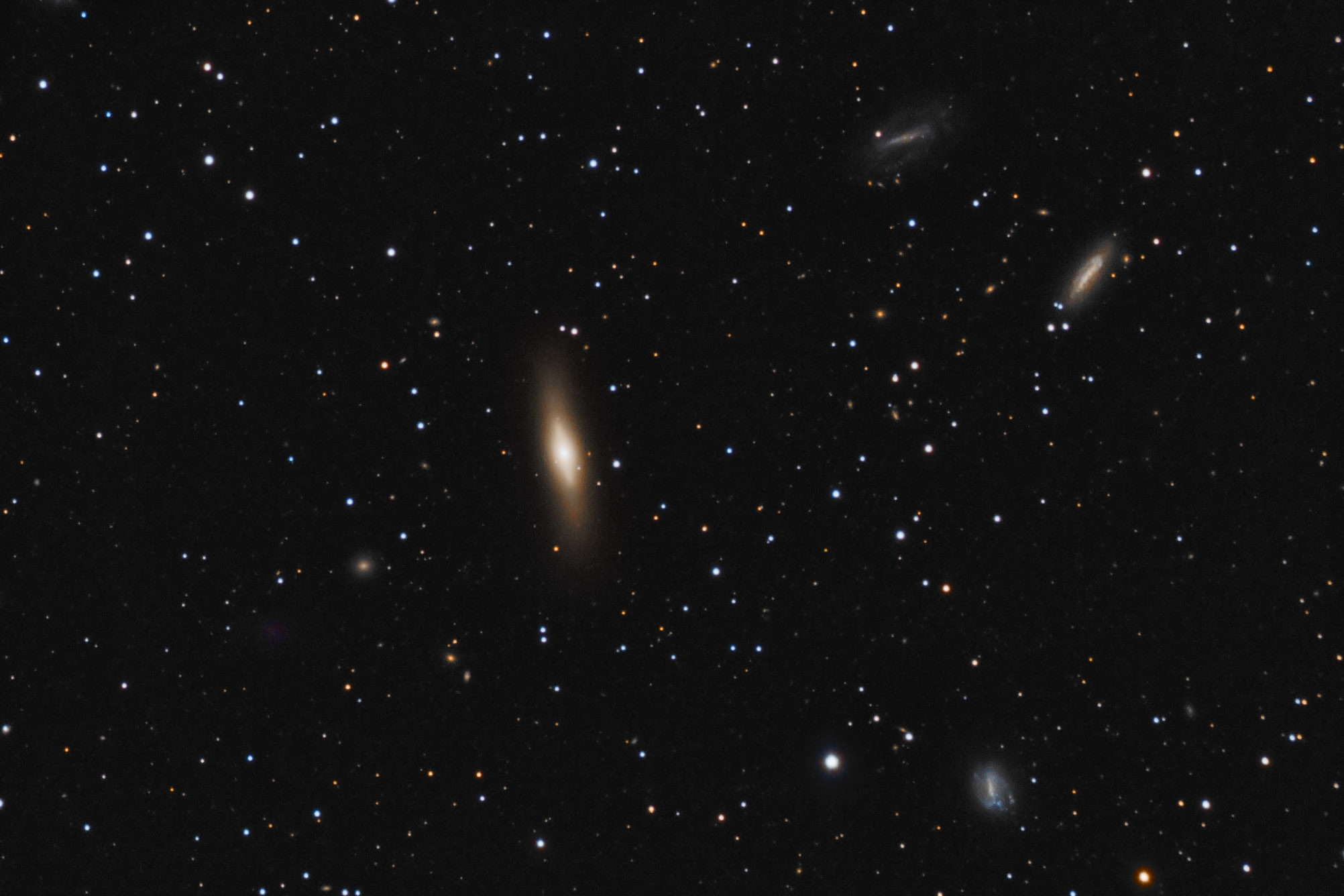 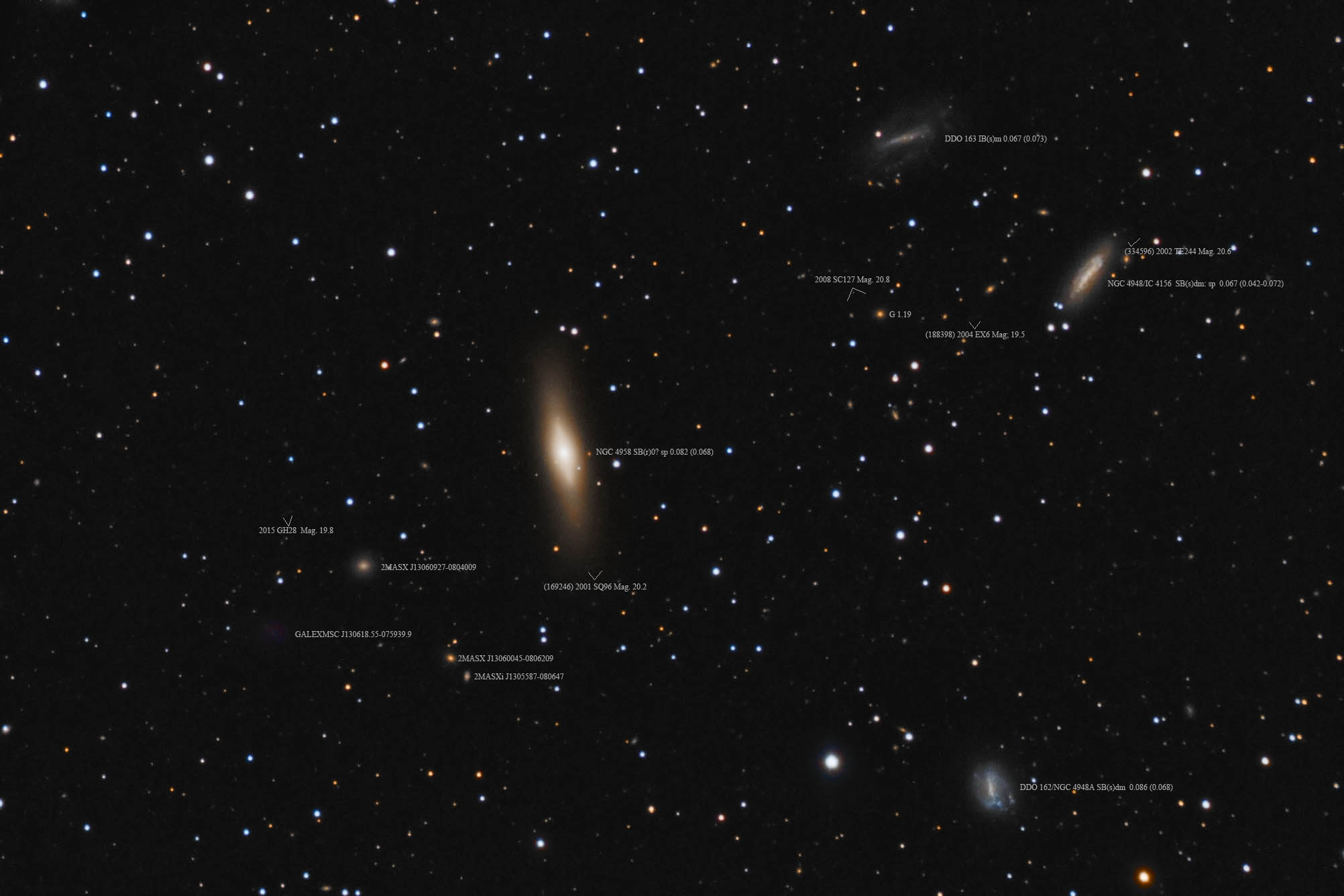