NGC 5002 is a barred Magellanic galaxy usually considered a member of the NGC 5033 group in Canes Venatici. NED\'s 5 year WMAP data shows it to be about 61 million light-years distant though a single Tully-Fisher measurement puts it about 40 million light-years distant. That\'s the distance APOD puts on NGC 5033 so I\'ll use it rather than the redshift-distance which is likely distorted by its motions in the group. That makes it about 20,000 light-years in diameter, rather typical for a galaxy of its type. I assume the bar is the linear structure. Odd in that it runs from the core to the edge on one side but not the other so is it a half barred galaxy? A loop of star knots runs through the galaxy. In lower resolution images it looks quite different than in my image. Then there\'s kkh 081 a very faint irregular galaxy at about the same redshift as NGC 5002. They may be traveling together and thus it is really about 40 million light-years distant same as NGC 5002. When I first brought up the luminance stack I thought it a faint reflection and nearly processed it out. But when I checked Jim Thommes recent image of the area I saw a very faint hint of it then found it very faintly on the POSS plates and Sloan image. There it appeared very \"grainy\" as it does in my image. Comparing the two the grain pretty much matches indicating the galaxy really is grainy, that is composed of faint star clouds. This is one that deserves a lot more time to see if this goes away or gets stronger. NGC 5002 was discovered by Heinrich d\'Arrest on April 27, 1865.

In preparing the annotated image I came across two galaxies from the TONS12 catalog. I\'d never heard of it. That stands for the Texas-Oxford NVSS Structure 12 hour region catalog. NVSS is a radio catalog by the National Very Large Array. That\'s the NV part, SS stands simply for Sky Survey. How Texas-Oxford fits in I don\'t know. Anyway, those two are radio galaxies, one, a lone distant but very bright and compact galaxy the other the bright cluster galaxy anchoring a 12 galaxy cluster in the upper right corner of my image. The distance to the cluster has been calculated photographically not spectroscopically, hence the \"p\" designation. The \"est\" for the galaxy means it is an estimate. Now how this is done I have no idea. In any case, it means both are likely less accurate than a spectroscopically determined distance.

One faint asteroid is listed in the annotated image. Details are in that image. You may need to enlarge the image to see it as it barely registered. The lack of a number indicates it has yet to complete one orbit since its discovery. 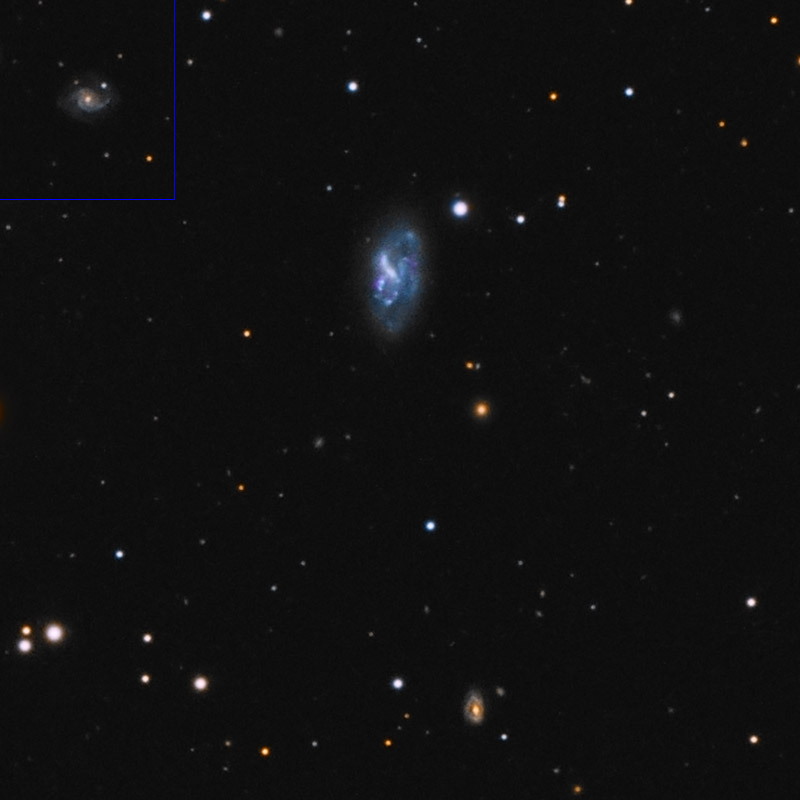