NGC 5014 caught my eye due to its odd dust lane. Near edge-on spiral galaxies have dust lanes that go down their length bisecting the galaxy. Though those lacking dust may not show a dust lane at all. But this one has a dust lane that goes vertically through the galaxy west of the core. By some fantastic coincidence, two field stars from our galaxy mark the endpoints of this dust lane. Both the stars and the dust lane are rather a rather similar shade of red as well. I did tone them down quite a bit as otherwise, they overpowered the dust lane. I did this equally so their relative brightness difference is maintained. There is a short dust lane below the core more where one should be. Seeing wasn\'t up to snuff, nor was transparency. The core has a blue blob on its east side according to the SLOAN image but it was below my resolution level.

There is a small plume above and a bit left of the core that is rather blue compared to the rest of the galaxy. Could this plume be due to something it digested recently? If so that may also explain the odd dust lane as due to the interaction or merger.

Redshift puts the galaxy some 63 million light-years distant while non-redshift measurements put it a bit closer, say 56 million light-years. Using the latter distance I measure its size at 32,000 light-years. Not a large galaxy. NED classifies it as Sa? as does Seligman. It was discovered by William Herschel on May 1, 1785, though he got its position a bit wrong as did his son years later. Still, with nothing similar in the area, its identity is quite certain. As it is rather faint it isn\'t in either of the Herschel 400 observing programs even though it is well positioned for northern observers in Canes Venatici.

The field contains the usual assortment of distant galaxies and quasars as well as a small galaxy group known as SHK 248. As I\'m starting to go through this catalog by Romelia Shakbazian for interesting groups such as this one I was pleasantly surprised to find one of her groups in the image. So I went to Google to find out more. That gave me an all too often result. The only citations it came up with of other than papers discussing the entire catalog were mine from two years ago. https://www.cloudynights.com/topic/405703-back-to-obscure-satellite-galaxies-holmberg-viii/

I won\'t repeat what I said there but can add a bit. The count is 9 galaxies according to NED. One has an identity problem discussed in the above link. Another SHK 248:[STC97b] 04 in my annotated image is actually two very close galaxies. Neither time was seeing sufficient to split them, unfortunately. But I can\'t get 9 galaxies. By definition of SHK groups, all should be easily within my grasp but I only get 6 or possibly 7 if ASK 519408 is included (see the link for more on this. There are three objects in a line at the top of the group but only the middle, slightly blue one, is a galaxy, the other two are stars. Also, the bright orange object at the end of a curving chain starting from the double galaxy is just a star. So where are the other two or three members? All I can come up with is that she mistook the aforementioned stars as galaxies. Easy to do working from the POSS plates rather low resolution.

In case you are wondering here are the requirements for inclusion in her galaxy group catalog:

*They must contain 5–15 member galaxies.

*Each galaxy\'s apparent magnitude in the POSS red band must be comprised between 14m/19m.

*They are compact, id est the relative distances of the member galaxies are typically only 3/5 times the characteristic diameter of a member galaxy.

*Almost all galaxies must be extremely red; there must not be more than one or two blue galaxies.

*Galaxies are compact (high surface brightness and border not diffuse).

*The group must be isolated.

I\'m not sure this one meets the red galaxy requirement. The northern member is blue as are the easternmost two in the bottom curve along with the one nearest the double galaxy. They too are somewhat blue or at least not all that red. That makes me think she included the three red stars as galaxies bringing the count up to 9 if the questionable one is included and the double is listed as single. The clusters were identified from the red POSS I plates which didn\'t have the resolution to split the double galaxy so I suspect it counts as only 1.

As an extra bonus, it turns out my 2012 image of the galaxy group could be easily combined with this image to make a much wider field. Its main target was Holmberg VIII from when I was taking the Holmberg galaxies. So I made a hasty combine of the two. This makes for a larger than normal image but is a nice one. Since conditions were quite different and my processing software has changed some I really should have processed the older image to be a better match. So don\'t look too hard for the seam as the change in signal to noise ratio is rather obvious thanks to the poorer transparency this spring. 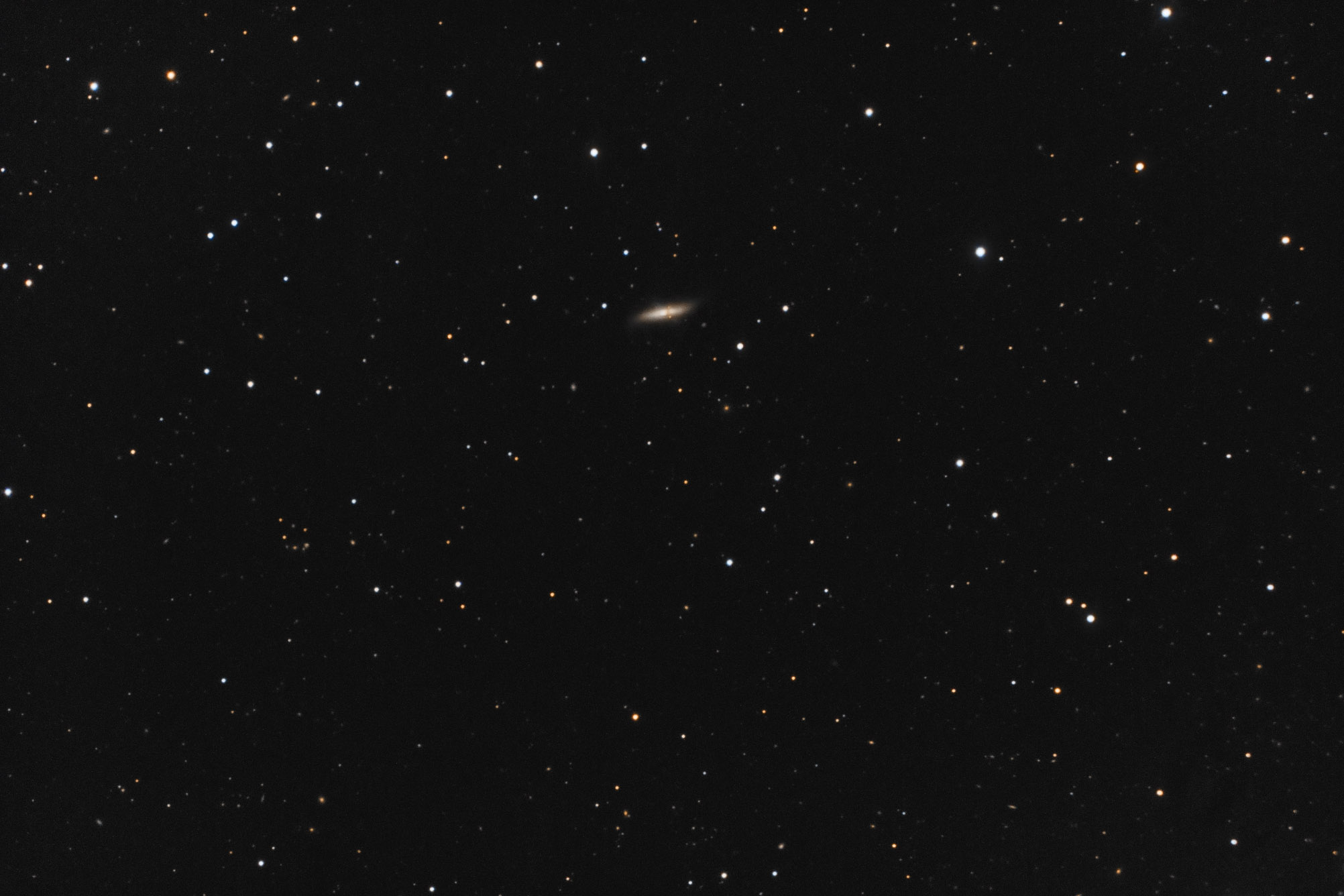 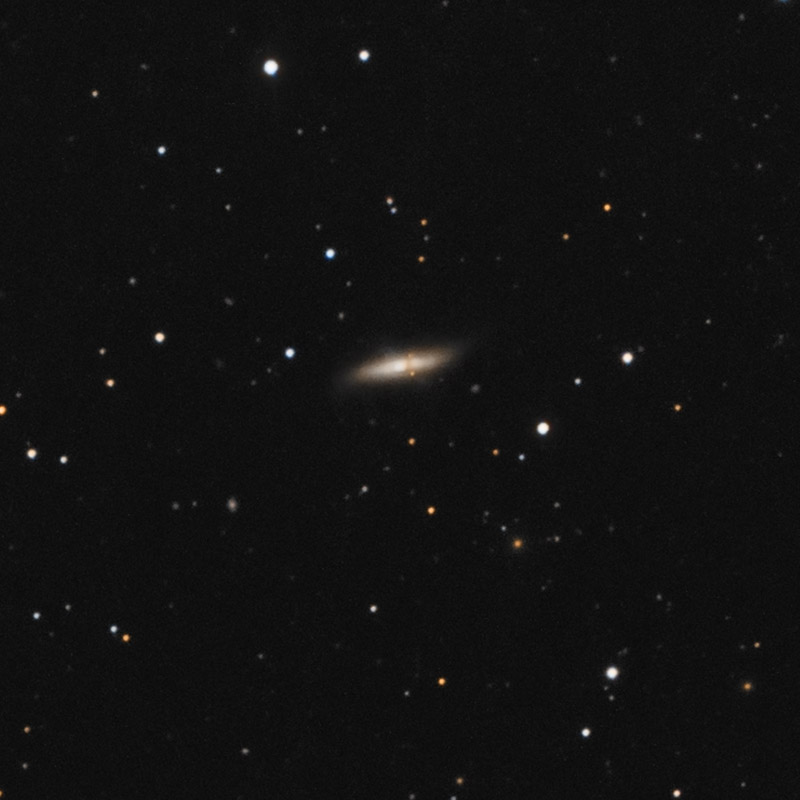 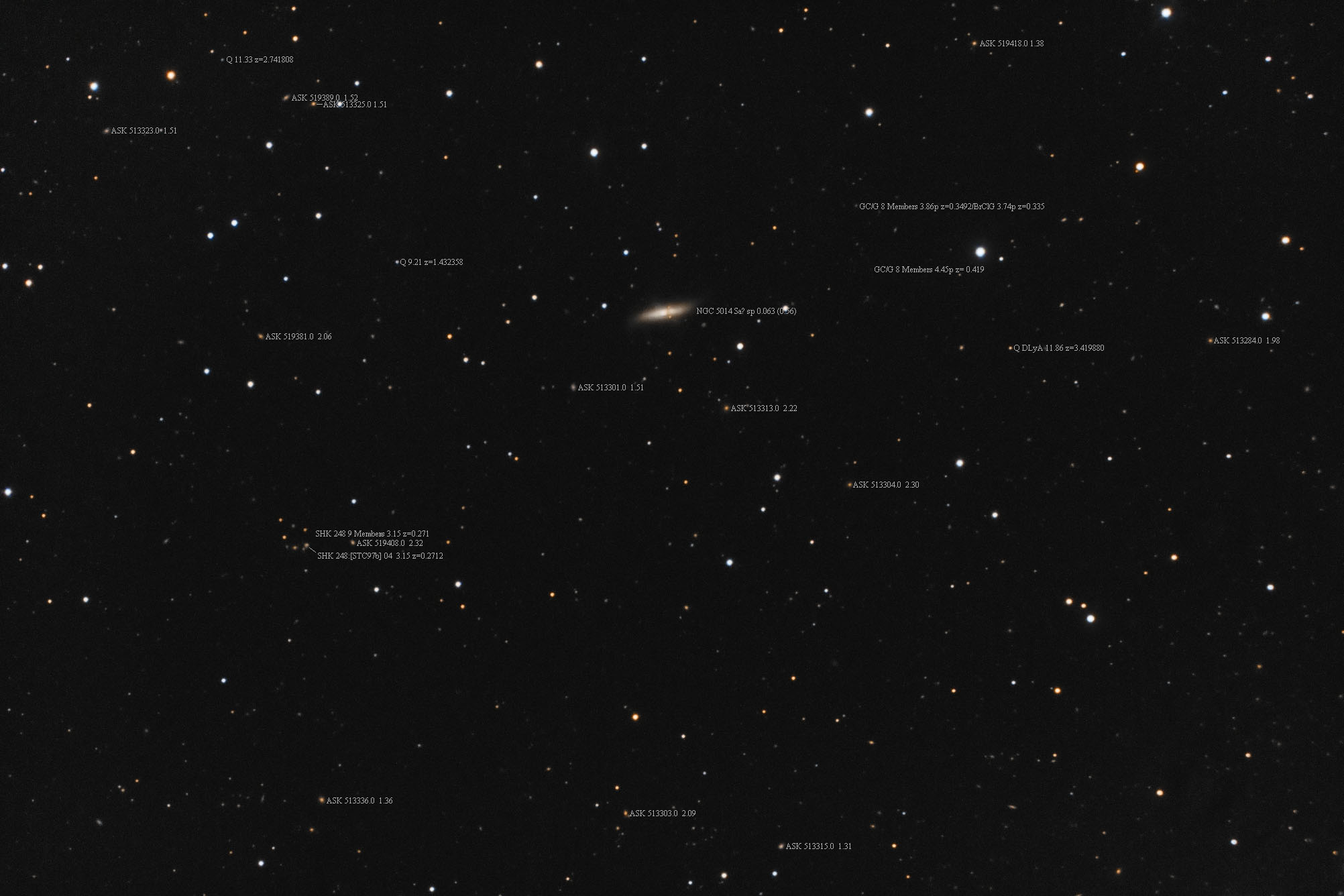