On January 23, 1784 William Herschel found a galaxy. He recorded the RA but not the declination except in general terms. He never went back to it. Tempel decided it didn\'t exist. Dreyer, after consulting Herschel\'s notes decided it was the same galaxy Marth had found on March 22, 1865. Still, he gave it two numbers, 5100 for Marth and 5106 for Herschel. There\'s some question however that 5100 really is what WH was trying to record that night. For more on this see notes for either galaxy at the NGC Project.

Today NED not only considers this galaxy NGC 5100 but also lists the interacting spiral to the northwest as part of NGC 5100 making it a double galaxy. But the entry for NGC 5106 only refers to the bright galaxy. It appears neither Marth nor either Herschel saw this companion. The companion carries its own designation on several catalogs including VII Zw 295 which is the catalog entry that attracted this pair to my attention in the first place. The pair are in north central Virgo, 450 million light-years distant. I measure the NGC galaxy at 130,000 light-years across. Likely that has been increased due to interaction with the companion. It will likely settle down to a somewhat smaller size. I measure the companion at 120,000 light-years across, nearly the same size but it appears even more drawn out by the interaction as it has one well-formed arm on the west to north while the eastern south going arm is an ill-formed squiggle, that likely was a nice arm before getting mangled in the collision. Assuming they actually are at the same distance their centers are only 90,000 light-years apart. Likely the separation is considerably greater. Still, I wish there was a way to create a time-lapse movie of what has happened to these two and what will happen in the future.

To the northeast is a ring galaxy ASK 450821.0 at 650,000 light-years. The core is off center but the gap between the ring and core is not nearly as empty as in many rings. I found nothing on it. I measure it at a bit over 60,000 light-years across at its redshift distance. This takes into account it was slightly closer when the light we see started on its way here and thus is seen slightly larger than it would if we saw it\'s light at its redshift distance. I usually start making this adjustment at 500,000 light-years look back time.

Three rather faint asteroids snuck into the image. See the annotated image for their details. 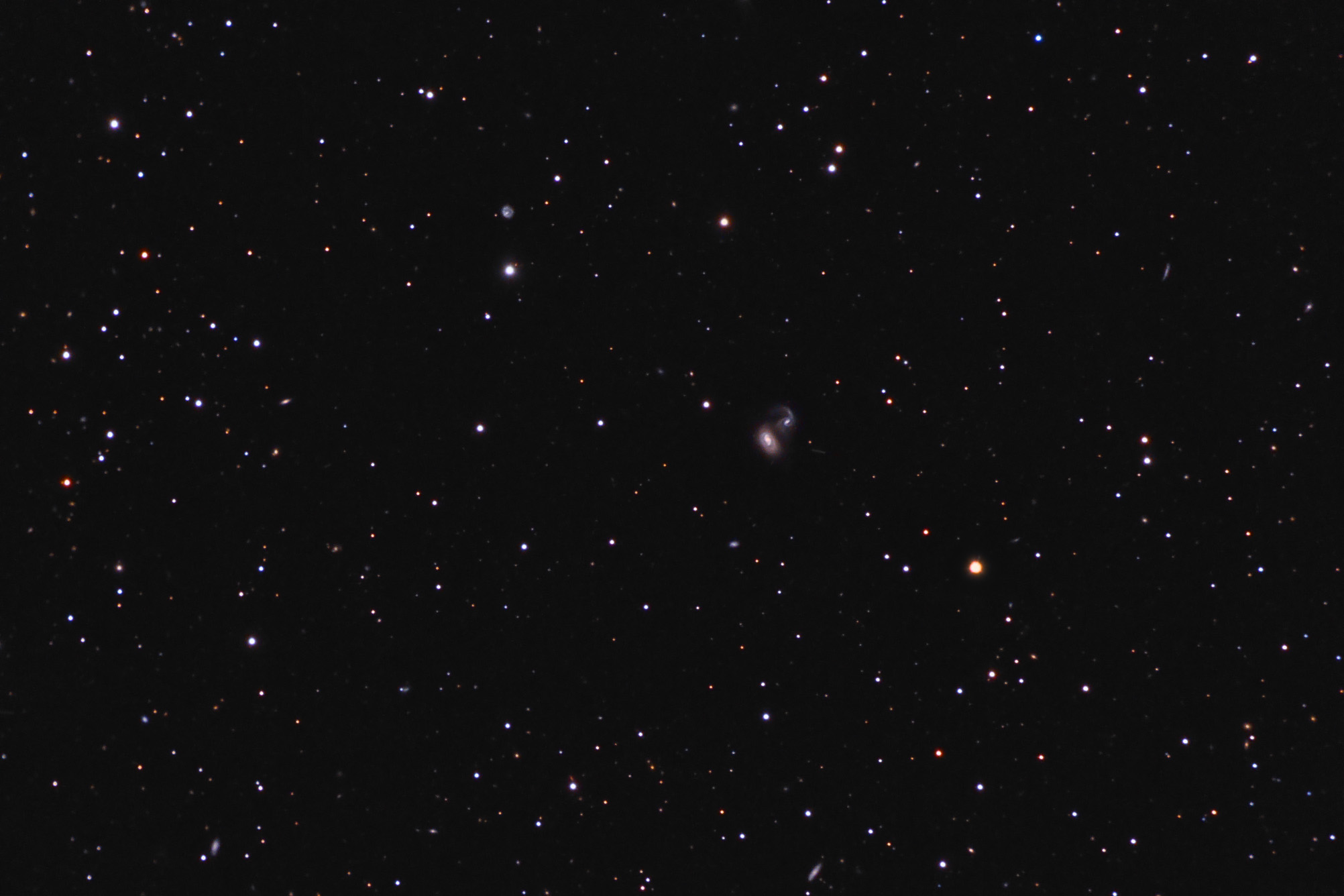 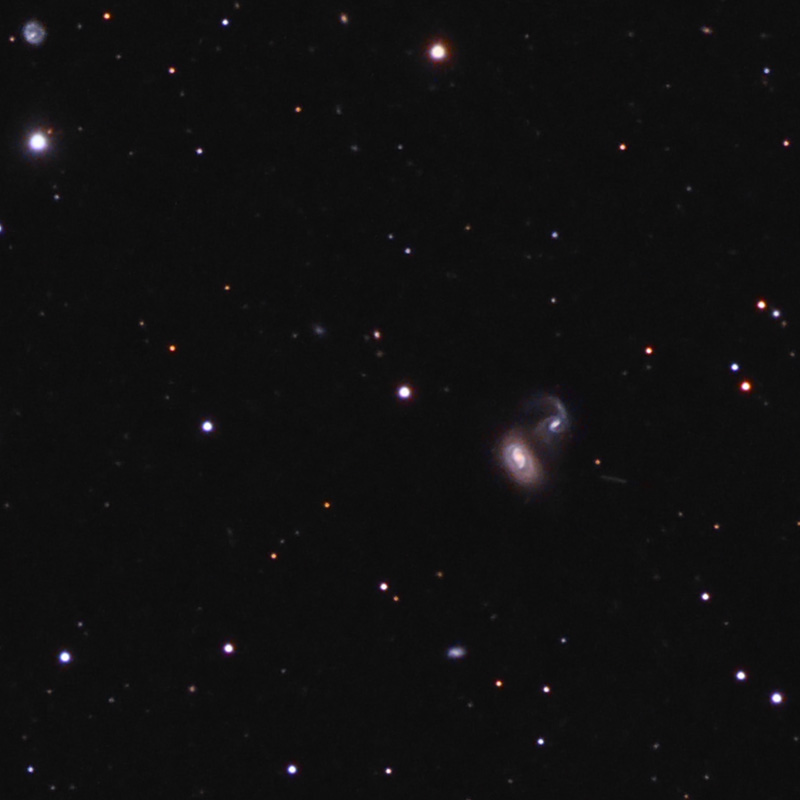 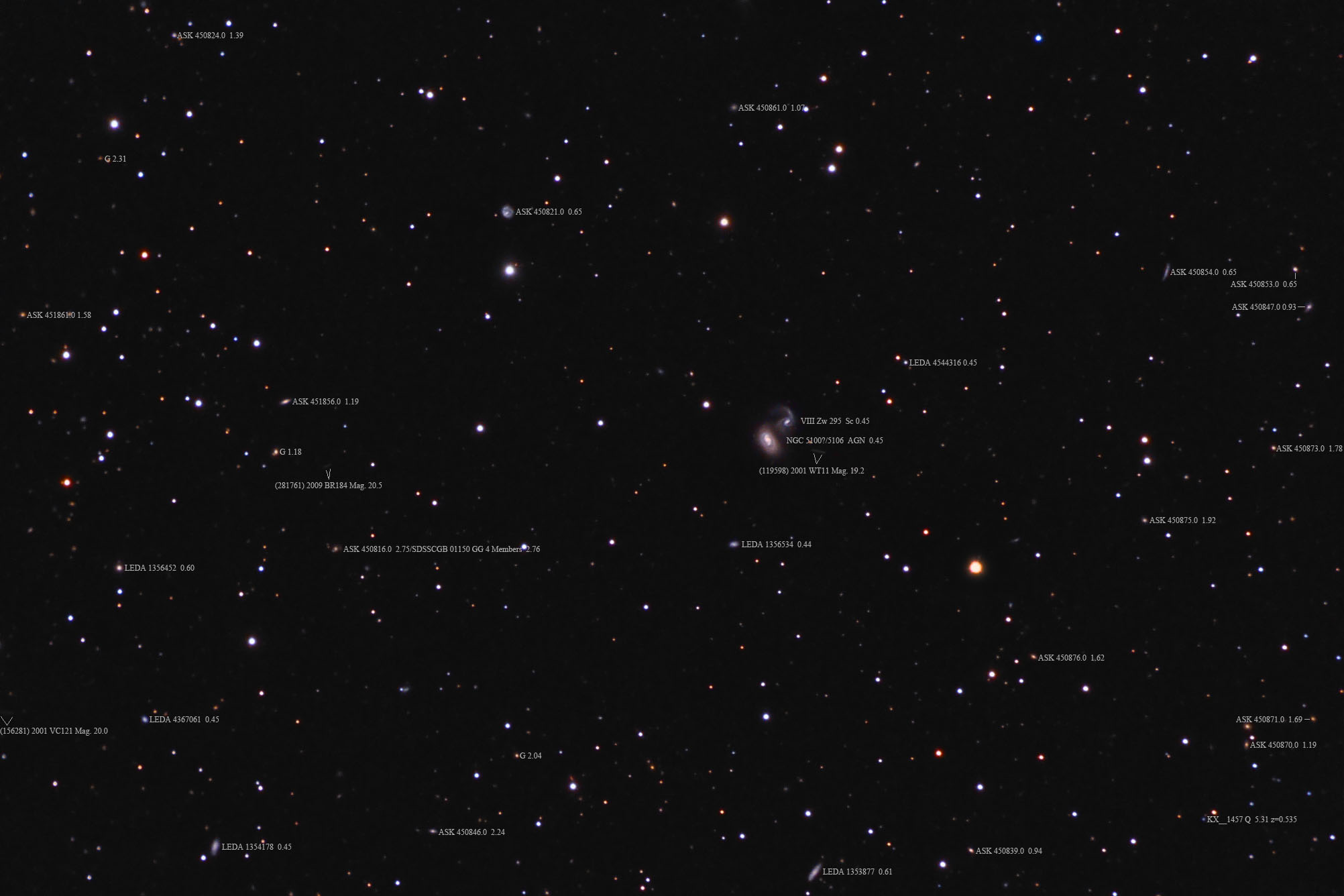