NGC 5183 was my original object as it is an Sb pec galaxy per NED and would fit into Arp\'s \"One Heavy Arm\" classification. Oddly the arm starts out rather narrow and somewhat red then after a short gap turns blue and gets very bright and broad dominating the galaxy\'s west side. The east side is very faint and somewhat extended making for the illusion a \"sloshed\" (off center) core at first glance though that\'s not the case. It is rather large as well as I measure its size at about 125,000 light-years. While NED considers it peculiar the NGC project classifies it simply as S... and Seligman doesn\'t even have a classification or much of anything on it.

To the northeast is NGC 5184 a more normal looking SAB(r)c galaxy according to NED. I can\'t say I see a much of a bar, maybe a hint of one going east-west. The NGC Project doesn\'t see one at all saying is Sb so doesn\'t agree as to the arm structure either. Again Seligman doesn\'t classify it. In what very few online amateur images of it I find it is very blue, even to a blue core. Instead, I am showing a galaxy that is showing signs of turning into a red and dead galaxy. There\'s not much blue to it. Just white and then redder parts with only a few hints of blue in the outer reaches of it. Has something, say its black hole, shut down star formation by warming the dust and gasses too much for it to condense into stars? I find nothing much to address this issue so that\'s just my speculation as it seems to have plenty of dust and gas to form stars. I measure its size as only slightly less than NGC 5183 at about 116,000 light-years

The field is located in central Virgo with the above two NGC galaxies being about 210 million light-years distant so not members of the Virgo Cluster. Both were discovered by William Herschel on April 11, 1877. Neither are in either of the Herschel 400 observing programs.

The field has two more NGC galaxies, these discovered by Albert Marth on April 12, 1864. They are the Sa? spiral 5192 and the S0- NGC 5196 toward the left side of the image. These are further away with the spiral at a half billion light-years and 115,000 light-years in diameter and the spherical galaxy somewhat closer at 310 million light-years. It is the smallest at only about 60,000 light-years in size. The NGC project classifies these two as Sa (no question mark) and S0 (no minus sign). The minus sign indicates it may be somewhat between E and S0 but closer to S0. Seligman has nothing on these two either.

There\'s a lot to see in this image thanks to it harboring the northern condensation of galaxies in the Abell 1750 cluster. I count 123 annotated objects making this one of my densest images to date. Near the center of Abell 1750N on the lower left of my image is the triple galaxy VII Zw 339 at about 1.11 billion light-years. The three elliptical-like galaxies all seem to inhabit the same elongated halo of stars. Many other galaxies at about the same distance are in the area since it is a true galaxy cluster. The southern part is below my field and centered somewhat west of the northern section.

To the northwest of the center of the image is another orange triplet of elliptical-like galaxies though they don\'t seem to inhabit one halo, it may just be too faint for the horrid conditions I had when taking this data. The southern member is the brightest and is considered the Bright Cluster Galaxy anchoring a Galaxy cluster of 23 galaxies. The distance to the galaxy is about 1.73 billion light-years and a bit further to the middle one if redshift is correct. I found no redshift for the northern one, however.

This field may have more annotated objects than any I\'ve done to date. I counted 124 including the asteroid. Normally a 19.5 magnitude asteroid would be easy to see on one of my images, even one moving as fast as this one was in retrograde. Its faintness is a good indication of how poor transparency was this May 5 night. 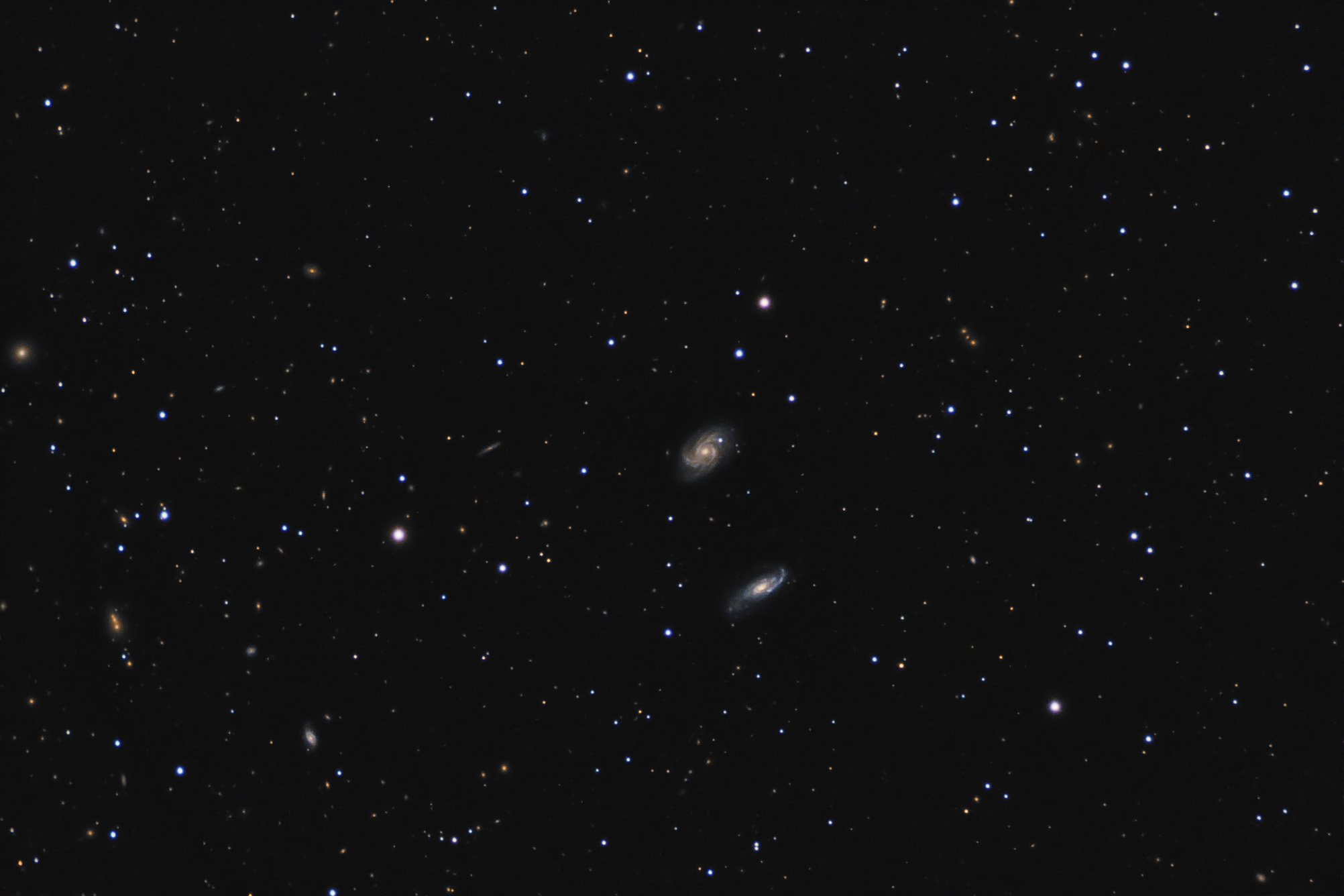 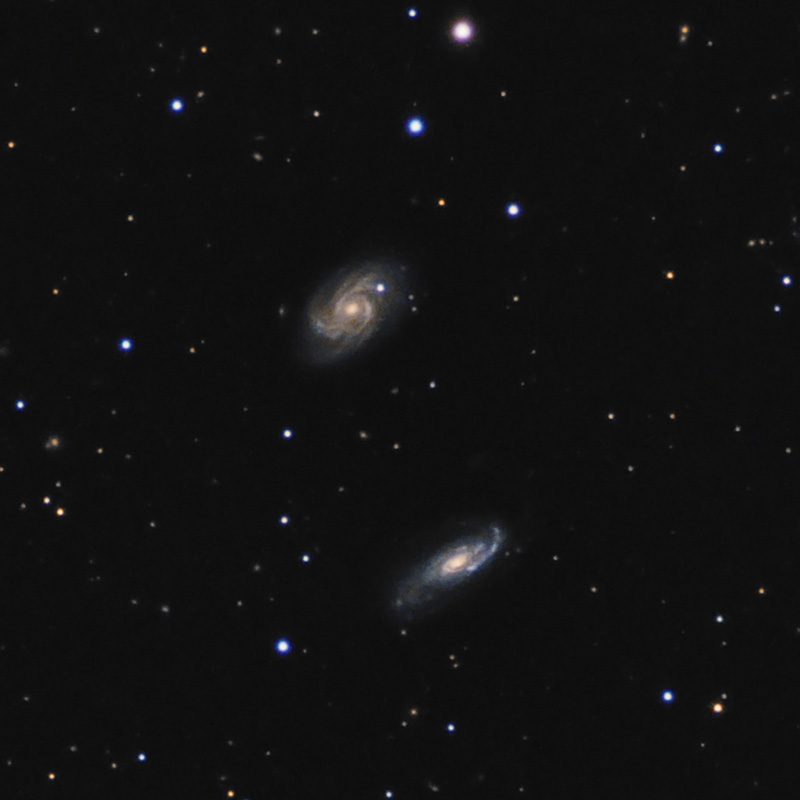 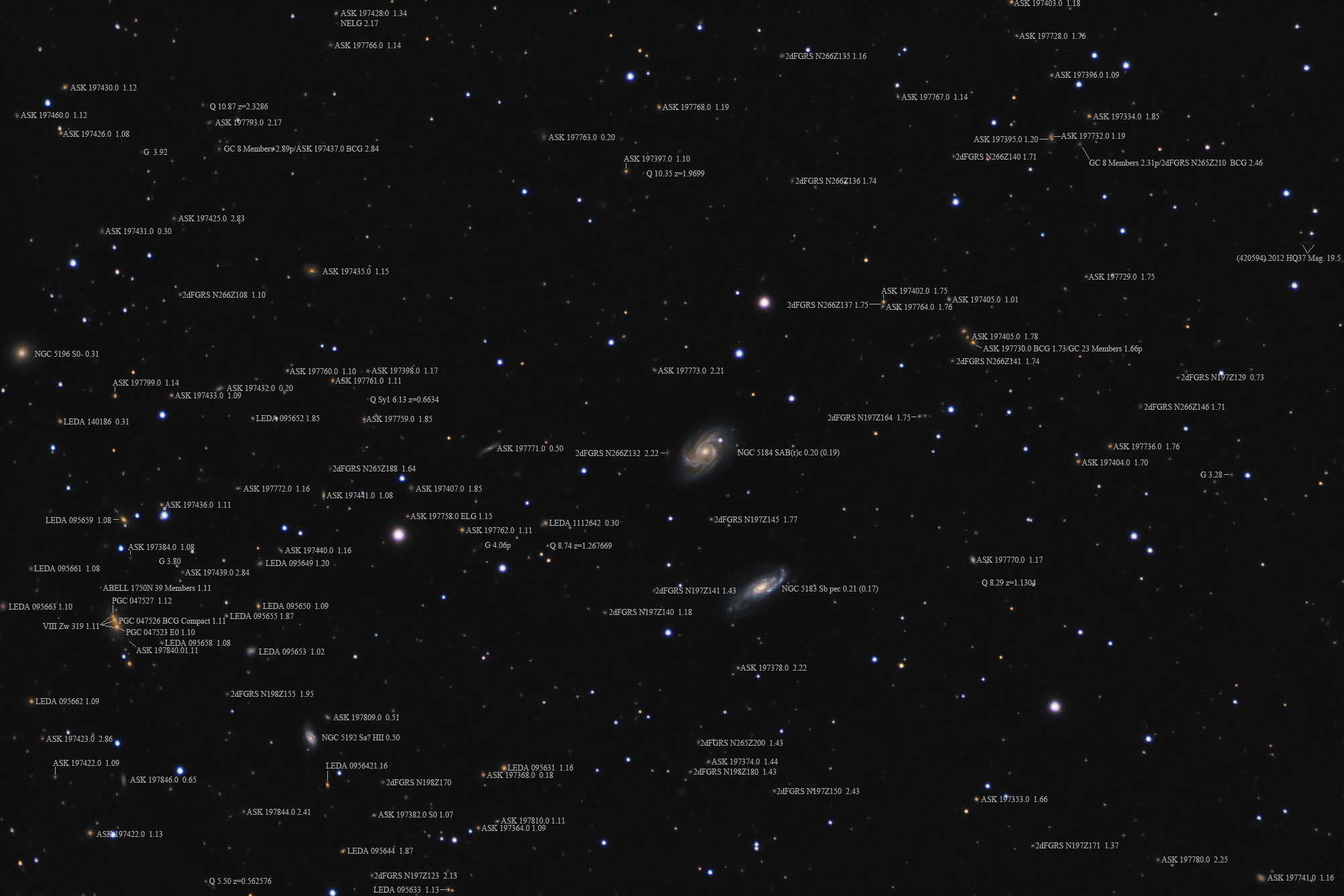