NGC 5204 is a dwarf, very blue, spiral galaxy of the Magellanic class, that is barely recognizable as a spiral, about 15 million light-years distant in Ursa Major. It is considered a companion to be one of 4 easily resolved, blue companions to M101 though M101 is over 6 degrees to its southeast, far out of my image frame. It is listed as having a lot of HII regions which show up as blue in my image due to the large number of very young, blue hot stars they contain. This is another one that could benefit from H alpha data. Fortunately, its redshift is low enough that my 6nm filter should work. It was discovered by William Herschel on April 24, 1789. It is in the second H400 program.

I was surprised to find a quasar candidate seen through the galaxy. It is marked in the annotated image. Several galaxies are also seen through its disk though none had redshift data so I didn\'t include them in the annotated image. The bright part of its disk is 16,000 light-years across but if you include the very faint outer reaches it is about 24,000 light-years across. Being so close it shows a lot of interesting detail right into its core region.

To its northeast is the odd galaxy LEDA 2579321. It has a very off-center core to its northeastern end and an odd plume coming away from the galaxy. At least I assume it is a plume. NED shows nothing for its position. Otherwise, I\'d have considered it a different galaxy, likely one even more distant. But considering how something has moved the core of this galaxy so far off center I suspect whatever that cause it may have created the plume as well. It also has an odd bright blue star cloud toward the southwest end. I wish we were closer to this one and could see better what\'s going on here.

The galaxy CGCG 294-040 to the southeast of NGC 5204 is classified as an elliptical galaxy but it looks more like a compact spiral to my eye. But both NED and the NGC project consider it an elliptical.

Two AGN galaxies lie about 900 million light-years distant on the right edge of my image. They are likely related. I have to wonder if they may have passed close to each other feeding their black holes sufficiently to create their AGN status.

There are several more galaxy clusters in the field than I have annotated. I only list those with an obvious bright cluster galaxy at its heart that is listed at NED. Some were so vague I couldn\'t really tell what to point to as they had a large error circle and no core galaxy, just a few possible faint galaxies in the area. Then there are groups I\'d have thought were clusters that aren\'t listed at NED. Maybe they are just a random gathering of unrelated background galaxies at varying distances. 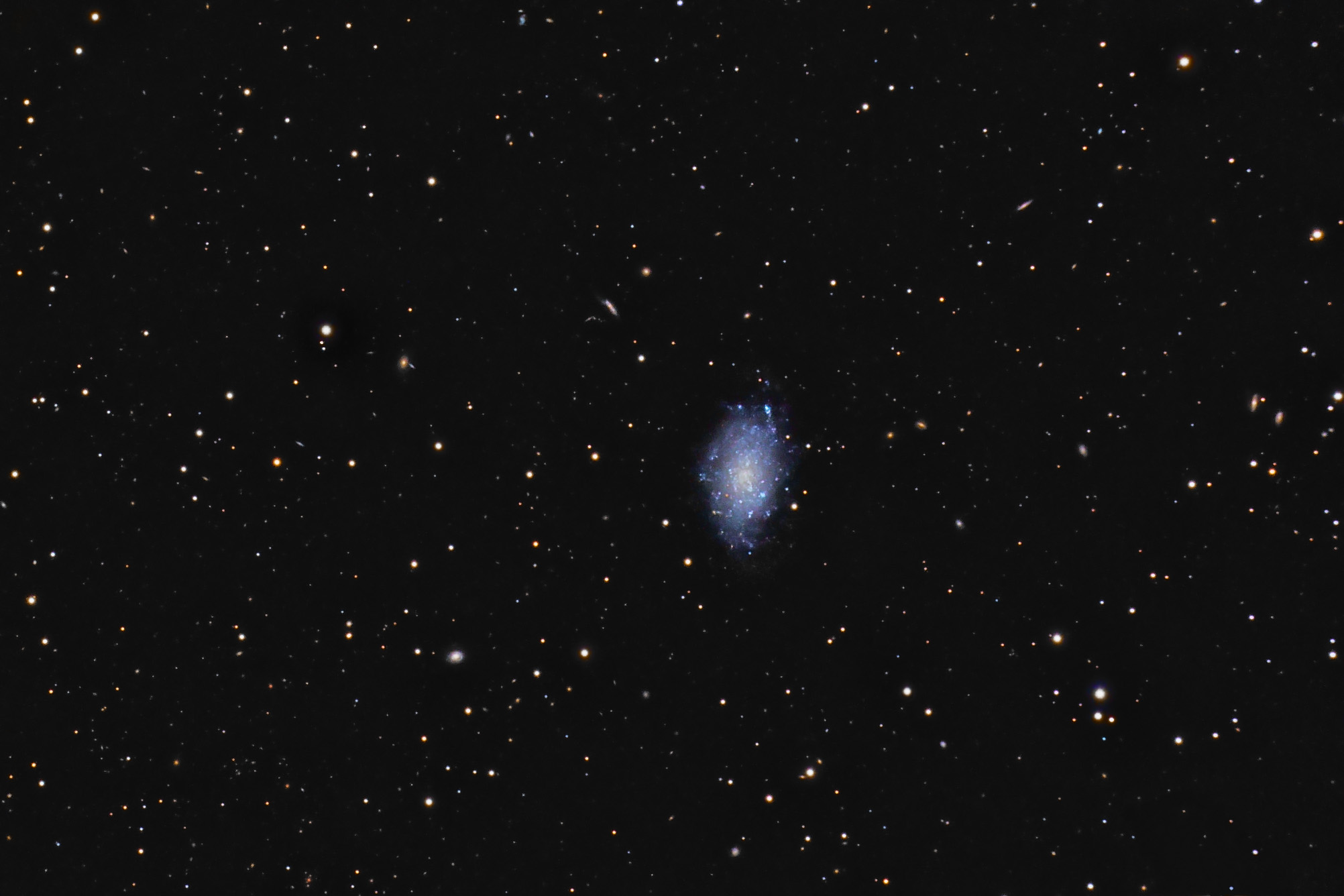 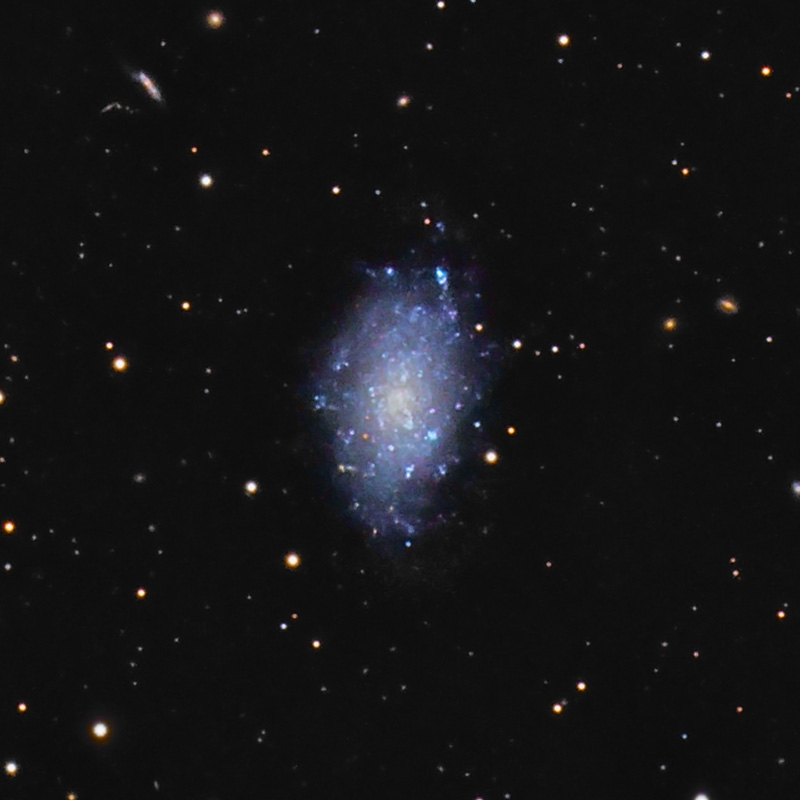 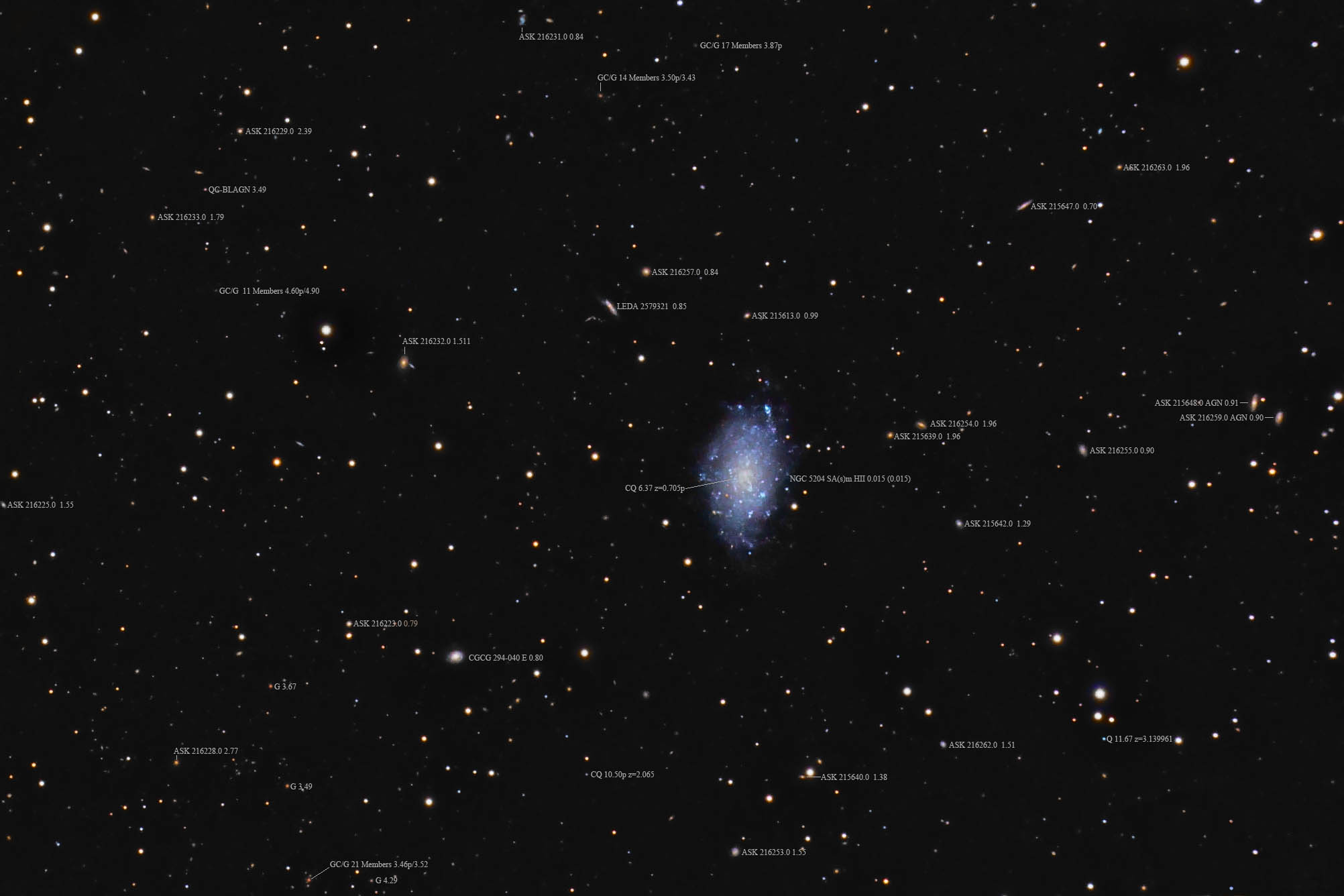