I made another attempt at a voorwerpjes galaxy. This time NGC 5252 but conditions this night were awful. My sky was 4 times brighter than a previous night when I captured NGC 5972 I posted right after I took it in May. I saw no hint of the structure in the raw images as they came in. But this was because the high background washed it out of the raw images. Once properly calibrated it began to show up. Still, the image is very noisy compared to 5972 and I can\'t trust some of the green I picked up. It doesn\'t seem to quite match the HST image location. Though some is out of the HST\'s limited field of view. ( https://www.spacetelescope.org/images/heic1507f/ Rotated about 90 degrees counterclockwise from my image.) This one needs to be redone but it was too far west by the time I realized this. In fact, it was already too far west when taken, that\'s why the background was so bright. It was in the light dome of a town of 4000 16 miles to the southwest of my location. Still, some of the structures definitely match. It amazes me what amateur gear can accomplish today. When I started in the mid 50\'s film couldn\'t begin to match film at major observatories but digital has helped level the playing field. We just need a lot more time with our smaller scopes.

William Herschel didn\'t know of voorwerpes when he discovered this one on February 2, 1786. It didn\'t make either program.

NGC 5252 is listed as an S0 Seyfert galaxy. The Seyfert status, as well as the voorwerpjes around it, are likely due to the galaxy it ate which then fired up the black hole in its center to quasar status. That lit up the voorwerpjes then faded down to only Seyfert status today but the light echo is still propagating our way. Redshift puts the galaxy about 330 million light-years distant. That makes this a huge galaxy of some 230,000 light-years long including the voorwerpjes and 200,000 light-years for the galaxy itself. Looking around the field there are a lot of other galaxies at this same distance. These include CGCG 045-060 an Sc galaxy that itself is about 75,000 light-years across. Most of the others are small dwarf size galaxies. But near the upper left is UGC 0865 a double galaxy. The edge on to the lower right is a distant 1.12 billion light-years distant and thus large at 150,000 light-years. It\'s apparently larger \"companion is an Sbc spiral at about the same redshift as NGC 5252 so likely part of its local group. It is half the size of its \"smaller\" companion at 75,000 light-years. Obviously while the share common catalog entries in several catalogs they are totally unrelated.

The field is in Virgo not far from the border with Bootes. NGC 5252 was yet another William Herschel discovery made on April 11, 1785. It is apparently too faint to have made either Herschel 400 observing program. 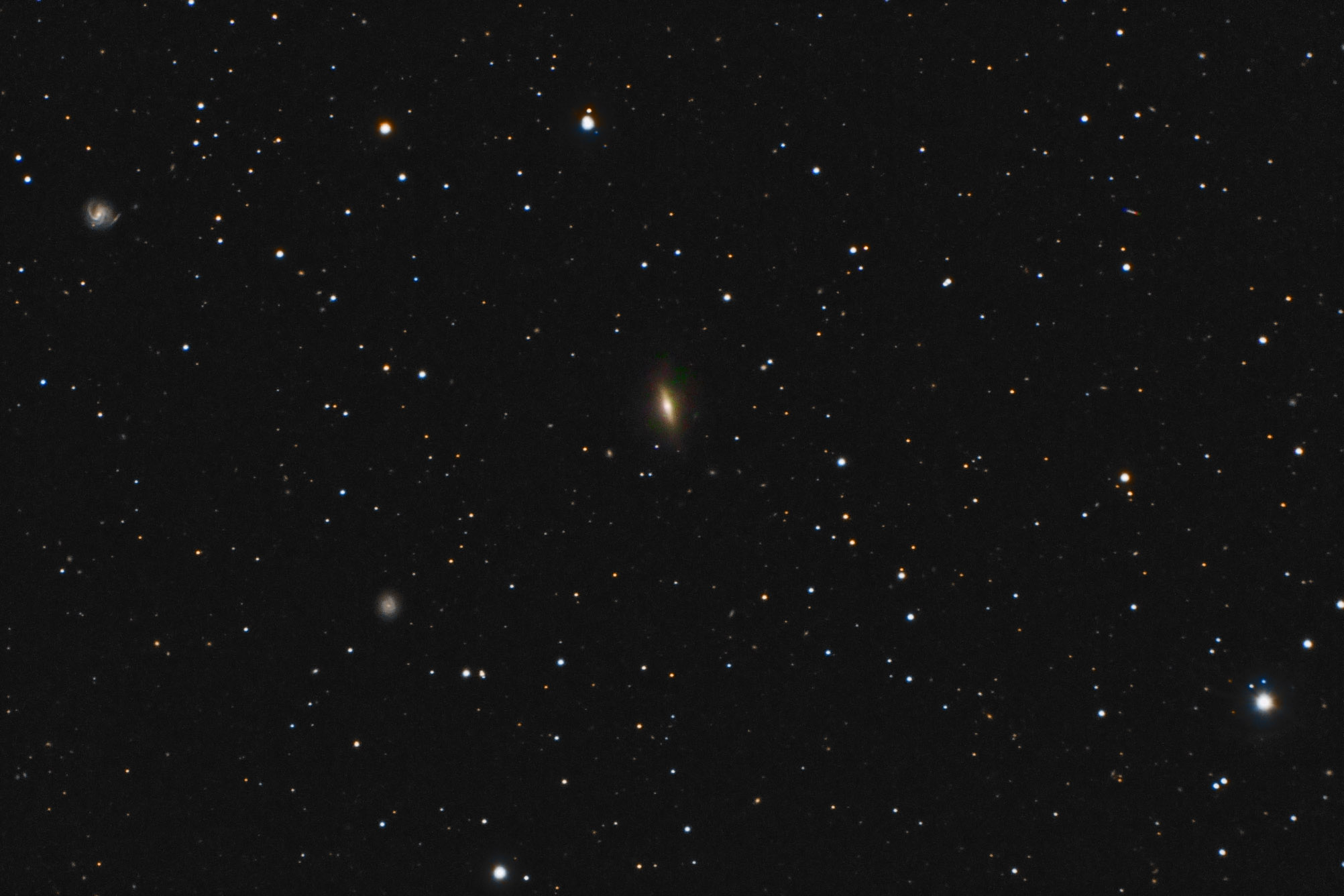 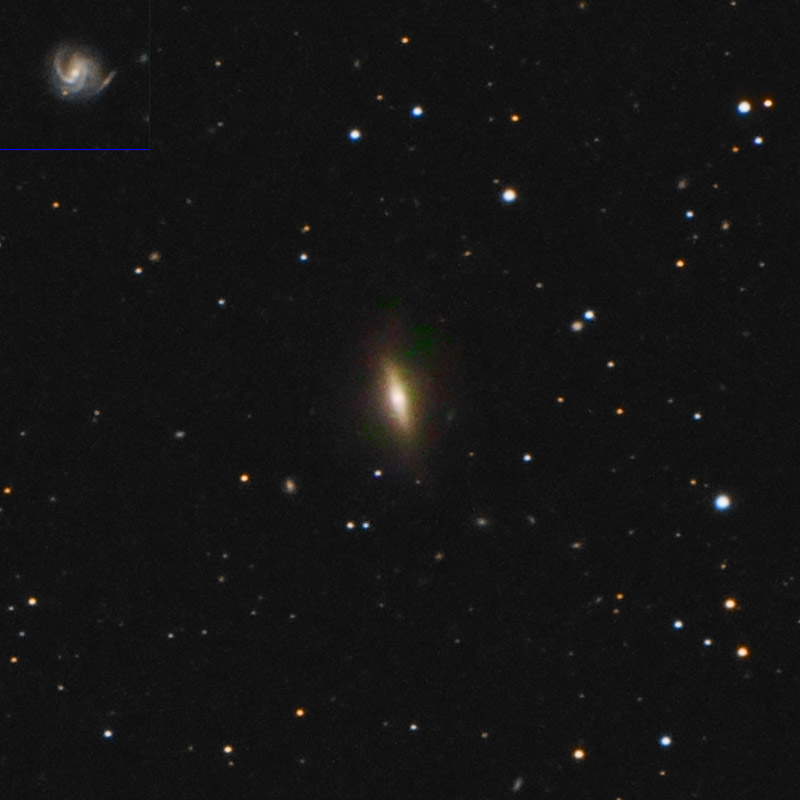 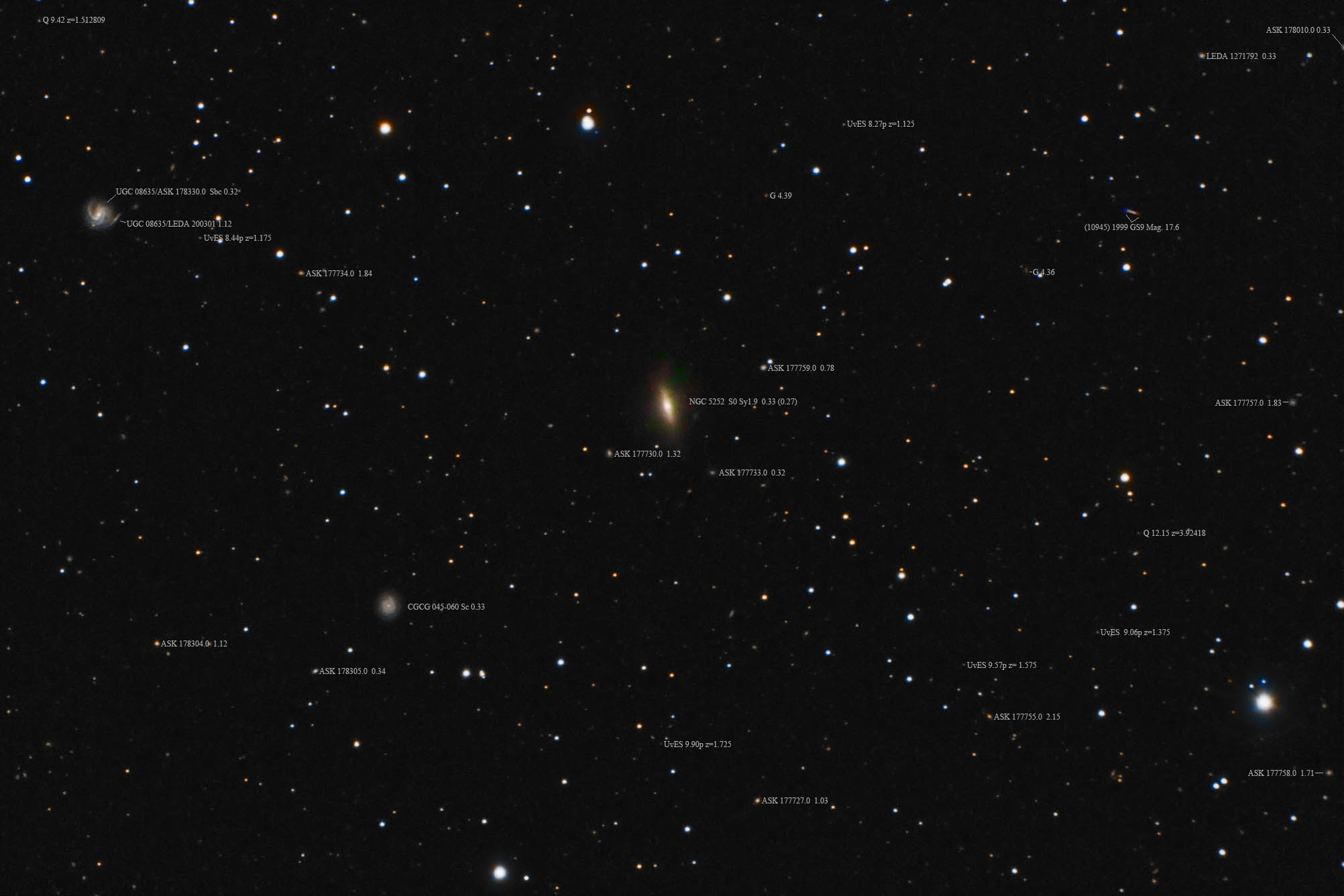