Yet another interesting, apparently connected, galaxy pair amateurs ignore. NGC 5296 and NGC 5297 are a pair of interacting galaxies that Arp was well aware of yet, for some reason, didn\'t include in his atlas. I\'ll get to the Arp connection in a bit. This interacting pair is located in northeastern Canes Venatici at a distance of about 110 to 120 million light-years. Though one non-redshift measurement of NGC 5297 puts it nearly a billion light-years away I think we can safely consider that an anomalous result. The pair is sometimes likened to M31 and NGC 205 (M110). NGC 5297 is a large SAB(s)c spiral about 170,000 light-years across thanks to its wide but sparse arms. NGC 5297 was discovered by William Herschel on April 9, 1787 but its companion had to wait until George Stoney working for the Earl of Rosse found it on May 3, 1850. NGC 5297 isn\'t in either Herschel 400 list but maybe it should be.

NGC 5296 is an S0+: starburst galaxy. It has a very odd blue \"secondary nucleus\" to use one paper\'s term to the southeast of the main core. To me, it appears to be a large blue star cluster. Seeing was very poor for this image. I\'d hoped to bring it out but seeing merged it with the core so it shows only as a blob on the side of the core. While listed as a dwarf its two tidal plumes give it a diameter of at least 45,000 light-years the main galaxy without the plumes is a large dwarf at 19,000 light-years.

Arp had a strange idea that he spent most of his life trying to prove but few subscribed to it. His idea was quasars were not the black hole centers of distant galaxies chowing down on stars, gas and dust to create their extreme brightness that is general consensus but instead are unknown objects ejected from active galaxies such as these. Their high redshifts weren\'t due to cosmological expansion but something else that required new physics. I won\'t claim to understand his claims. Some of this is covered in the Kanipe-Webb book \"Arp\'s Atlas of Peculiar Galaxies\" published by Willmann-Bell. Note the quasar to the southwest of NGC 5297, NGC 5296 BSO1. He reported a luminous extension from NGC 5236 pointed at the quasar. If you use the northern edge of the plume it sort of does run to the quasar but the center of it certainly doesn\'t. To Arp, this fits his theory. What he made of the other quasars in the field I don\'t know. In any case since space is at least 3 dimensional just because in two dimensions the quasar sort of lines up with the plume doesn\'t mean it does so in three dimensions. Indeed its redshift argues strongly against this. Until the other quasars in the field and just outside it can be tied in it doesn\'t mean much. Then there are the thousands of quasars found nowhere near (by angular separation) an active galaxy that his idea requires.

Conditions were poor for this image. A lot of detail was lost. It might actually get reshot in the future if better conditions prevail. But then don\'t hold your breath. I have a ton of others I want to get. 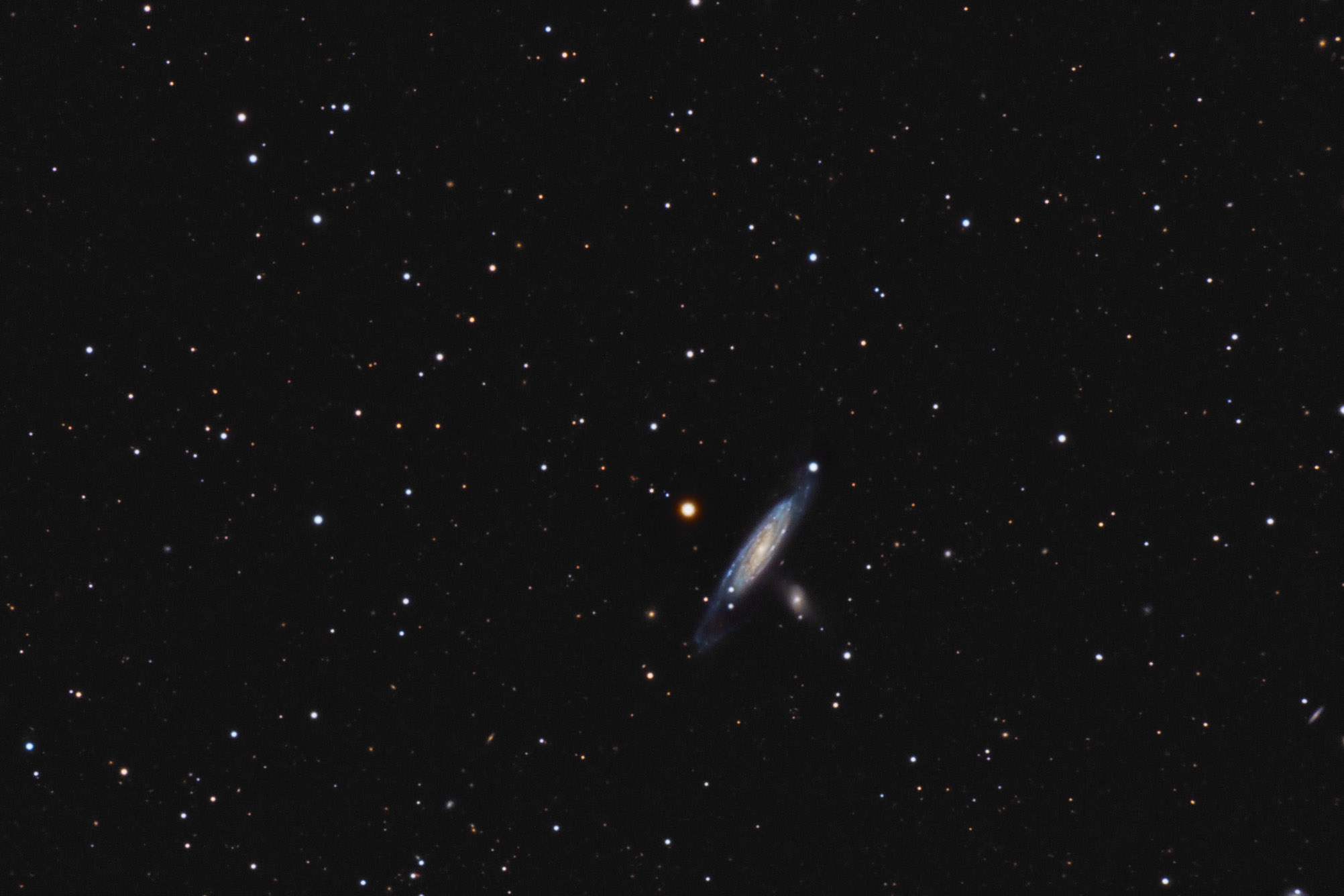 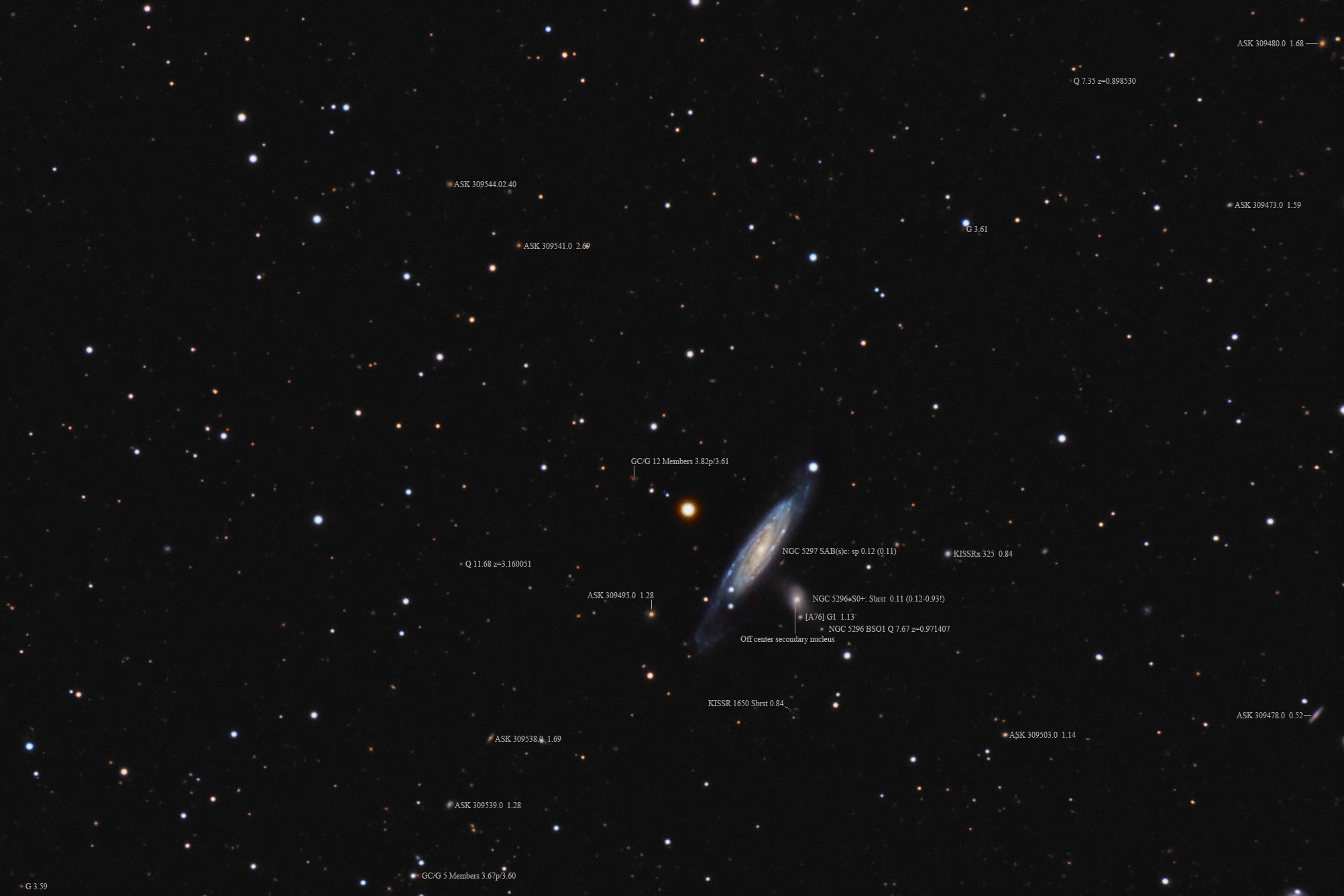