This field is located in eastern Canes Venatici. It consists of three NGC galaxies. NGC 5351, the brightest of the group was seen by William Herschel on May 16, 1787. It is not in either of the Herschel 400 programs. Apparently, the other two were too faint for his telescope. NGC 5341 and NGC 5349 weren\'t discovered until March 24, 1857, by R. J Mitchell. He likely was using the Earl of Rosse\'s 72\" scope to find them.

NGC 5351 and NGC 5341 have about the same redshift so are likely related. NGC 5349 is nearly twice as distant so unrelated. Interestingly all three have cores that are much brighter than their outer disk structure. The makes seeing all but the cores rather difficult. What few amateur images I found of this field sometimes missed their outer, quite blue, very low surface brightness disks. In fact, my exposure time for them, especially NGC 5349 was too short to do its outer disk justice. It is rather lost in the noise. The sky was unusually dark this night so I expected good transparency. It seems it was dark because of lousy transparency and not so great seeing. That misjudgment on my part means it should go on the reshoot list but that likely will never happen.

Could NGC 5341 and NGC 5351 have interacted in the past? While NGC 5341 looks like an obvious spiral its classification as one has a question mark. While it looks small in my image, including the faint blue plumes I measure it at 80,000 light-years in size, a quite respectable spiral. But are the faint outer arms due to interaction with NGC 5351? I found nothing in the literature (not much) on this subject. NGC 5351 is much brighter so its outer disk is also brighter. Still, I had to work to bring it up and out of the noise. It is twice the diameter of NGC 5341 at 143,000 light-years across. Now that\'s a big spiral.

Much more distant NGC 5341 with its very faint disk is actually the largest of the three in diameter at 156,000 light-years. It just looks small due to its more than a quarter billion light-year distance. At the very bottom of the image, its glow just getting into the frame is another galaxy at about the same redshift as NGC 5349. I wish now I\'d pointed a few minutes south of where I did to have picked it up as these two may be related.

Near the bottom of the image, there are many galaxies of varying distances. I\'d have suspected a cluster but except for a 3 at 810 to 840 million light-years they ranged from 370 million to 2.7 billion light-years. Then I found near the bottom was the center of the ABELL 1812 cluster. A very sparse cluster with no core galaxies. I found little on it but it is listed at 850 million light-years. A bit further than the three in the area. Scattered across the frame, however, are other galaxies about this distance. I found no size listed for the cluster. If these widely scattered galaxies are also part of the cluster, likely considering it is so close they could appear scattered from our viewpoint, then the cluster while centered at the bottom covers much of this frame.

Below NGC 5351 is a faint smudge. It has a bright round core to the southwest end with a faint glow from the southwest to northeast. It looks a bit like a very sloshed spiral. But its only identity I could find at NED is [TT2008] 181. NED classifies it as a dE. The round part certainly fits but what about the extended portion. Unfortunately, my underexposure of the field limits what I can see in my image. While even fainter in the Sloan image after enhancement it fits what I\'m seeing in my image. SIMBAD classifies it the same but says it is a galaxy in a group of galaxies with no mention of which others are part of the group. With no distance data, it remains mostly unknown. 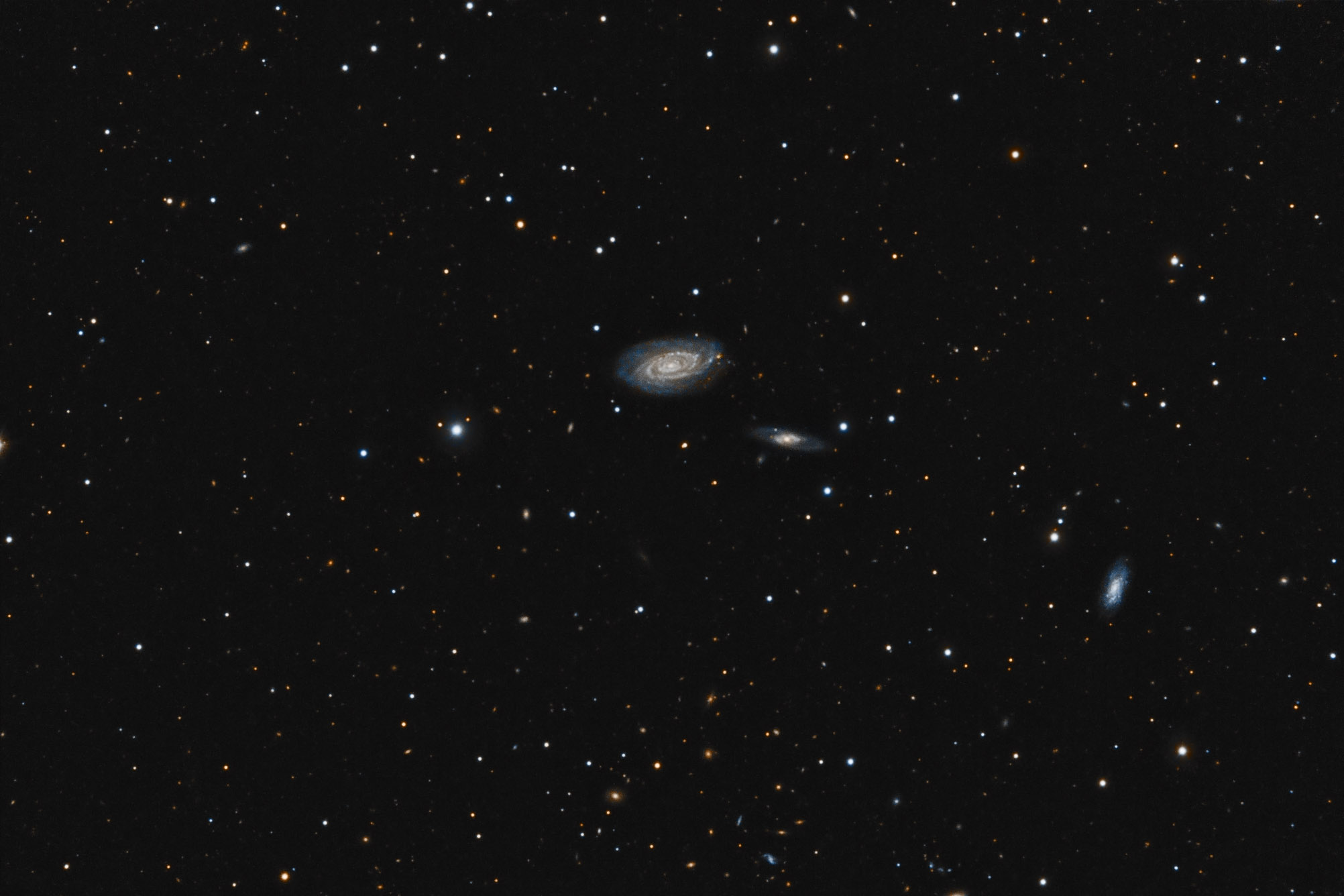 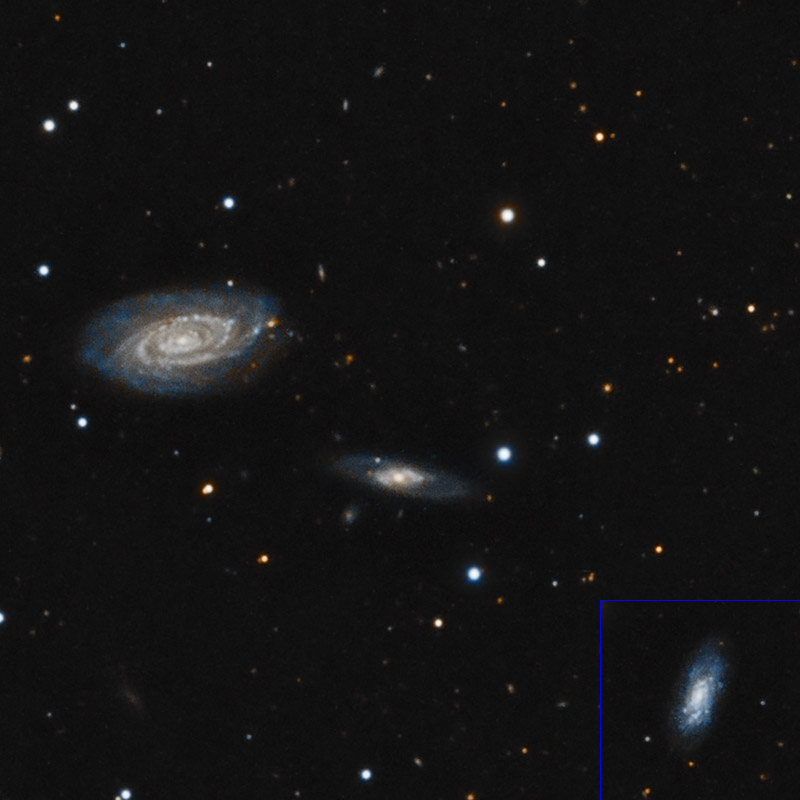 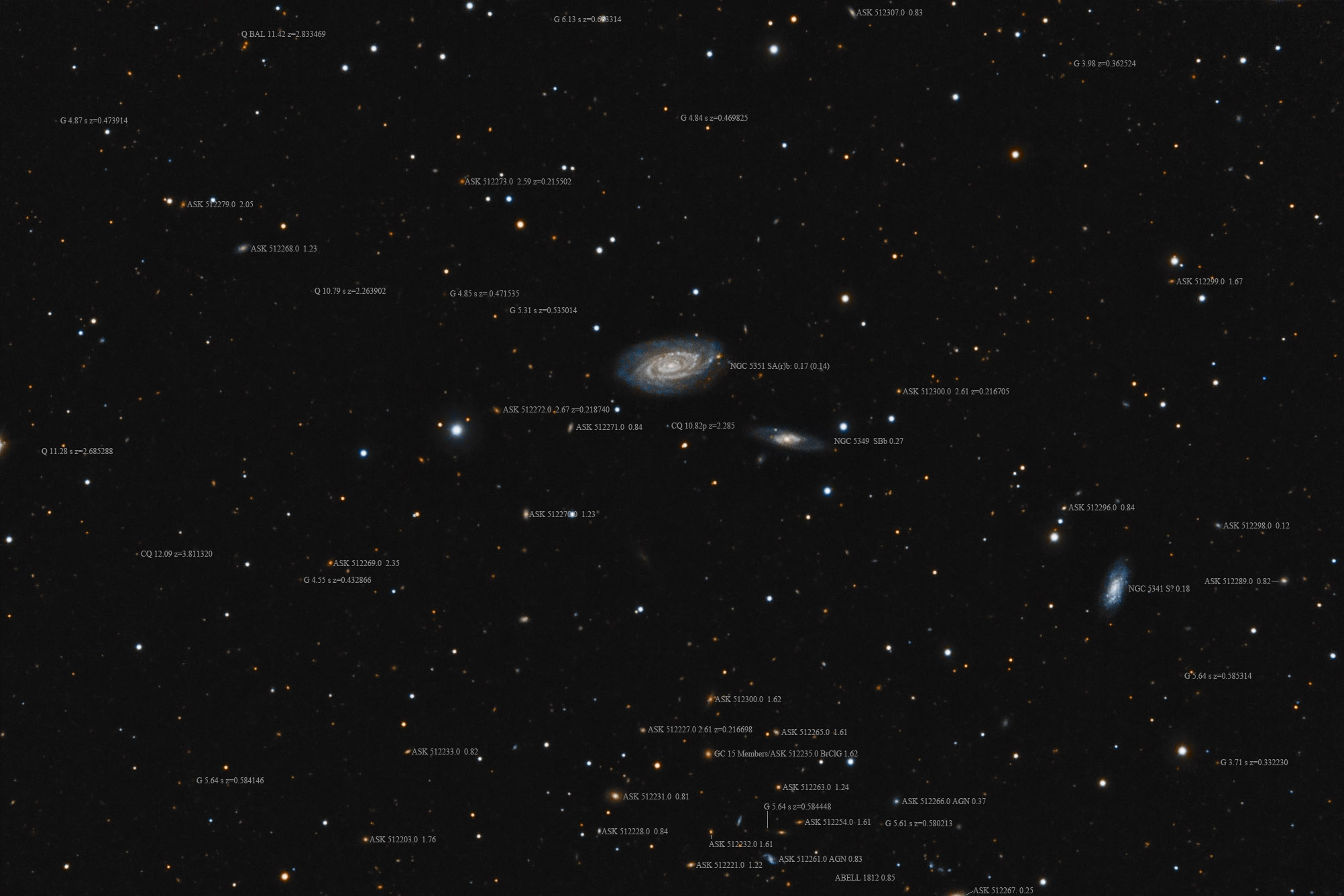