NGC 5360, 5363 and 5364 are a trio of galaxies in Virgo and members of the famous Virgo Galaxy Cluster about 60 million light-years from us. I\'ll tackle them in reverse order.

NGC 5364 is a nice spiral galaxy which redshift puts at 70 million light-years but other estimates say more like 63 million light-years which seems more reasonable. NED calls it SA(RS)bc pec with HII. The NGC project\'s more simple classification is Sbc/P. They are in agreement that it is peculiar. It has a rather diffuse inner spiral structure that ends with a nice ring. Two major arms spiral off this ring, each making slightly more than a complete 360 degree trip around the galaxy. Most of the HII regions are small but one large one is obvious in my image with faint hints of pink throughout the rings. More would likely be seen if I added H alpha data but I\'ve not taken any. At 63 million light-years, its angular size indicates it is about 125,000 light-years across. One of the larger spirals in the Virgo Cluster.

It was discovered by William Herschel on February 2, 1786. My entry from the original H400 program with my 10\" f/5 at 50x on a poor night with fog reads: \"Large, oval galaxy with irregular edges to the halo. Brighter toward the center but no definite nucleus seen. In the same high power field with NGC 5363.\" On April 7, 1828 his son John found it, got the coordinates a bit wrong. That resulted in it getting the NGC 5317 designation.

NGC 5363 is a strange galaxy that NED calls I0? and the NGC project describes as S0-a. I tend to agree with the NGC Project as it has some interesting dust structures in my image I\'d expect in a S0 galaxy with some Sa traits. It has a LINER core so its black hole is apparently finding something to chow down on. A star right near the core doesn\'t help with resolving that region of the galaxy. Redshift puts it about 65 million light-years away. Several papers refer to a short, fine dust lane running along its minor axis. The only dust I can resolve is along the major axis. As elliptical-like galaxies go, this is a more interesting one. Measuring the very outer halo of this galaxy and assuming the 65 million light-year distance it is also about 125,000 light years across its major axis. If it is really somewhat elliptical in shape and isn\'t exactly face on then it would be even larger. Just the inner regions where we see the dust lanes are 70 million light-years across. It too was found by William Herschel but on the night of April 19, 1874. My entry from the original H400 program had little to say about it. It simply says, \"Small, bright oval galaxy with NGC 5364 in the same field.\"

NGC 5360 is a much smaller galaxy that NED says is I0 same as NGC 5363 but without the question mark. The NGC project disagrees calling it SB0-a. I\'m not sure what to make of that. Redshift puts it 67 million light-years away. This seems a bit too big. It likely is closer but moving away right now in its orbit about the cluster making it appear further away than it really is. Though the only non-redshift measurement I found puts it almost 75 million light-years distant. Assuming the shorter distance it is about 32,500 light-years across. It was found by Albert Marth on May 8, 1864.

The fourth NGC galaxy is at the upper left of my image. It lies far beyond the Virgo Cluster at over a half billion light-years distant. NED lists it as a compact galaxy with star formation. No other classification is given. The NGC Project also says \"Compact\" but makes no reference to star formation. It is NGC 5373 and was also found by Albert Marth the same night he found NGC 5360.

I expected to find quite a few dwarf or at least small members of the Virgo Cluster in the image as such galaxies far outnumber the major galaxies in the cluster. But only 4 were seen. Three along the right edge and one near the left edge. Only the latter had a designation beyond that of its coordinates. IT is CGCG 046-013 with a redshift distance of 83 million light-years. So it could lie beyond the cluster if that is a true distance indicator.

In preparing the annotated image I ran into some issues I\'d not come across before. In some cases, NED lists the redshift distance as questionable but doesn\'t say in what way or by how much. For those, I\'ve put a question mark after the distance which is based on this questionable redshift figure. Then I ran into some galaxies at distances far beyond those of the quasars in the image or even quasar candidates (UvES). One had a redshift putting it 11.39 billion light-years distant with a z of well over 2. No way I can see a galaxy at that distance. But NED lists these as galaxies rather than quasars or quasar candidates nor does it indicates some issues with the redshift value. These are listed G? in the annotated image. NED listed many IR galaxies that are bright enough to show in my image if their visual brightness was similar. Apparently, they are far fainter in visual light as I couldn\'t find any of these, even those 4 magnitudes brighter than my visual limit. After finding the first dozen or so were beyond my reach I didn\'t investigate the rest unless it was listed at magnitude 18 or brighter. None of these were seen in my image however so even that was a waste of time. Some of the galaxies were very faint. While visible in the uncompressed TIFF image I used to make the annotated image some are extremely faint in the compressed JPG image so if you don\'t find them that\'s the reason. Though all I checked in the JPG image do show if you blow up the image a couple times.

As usual, I ran across several galaxies not in NED at all. Again this was only because I double checked to be sure I hadn\'t missed them wading through all the invisible IR objects. Since I did this only with a few that interested me I again suspect quite a few more were also overlooked by the automatic software that picks this data out of the Sloan Survey data. 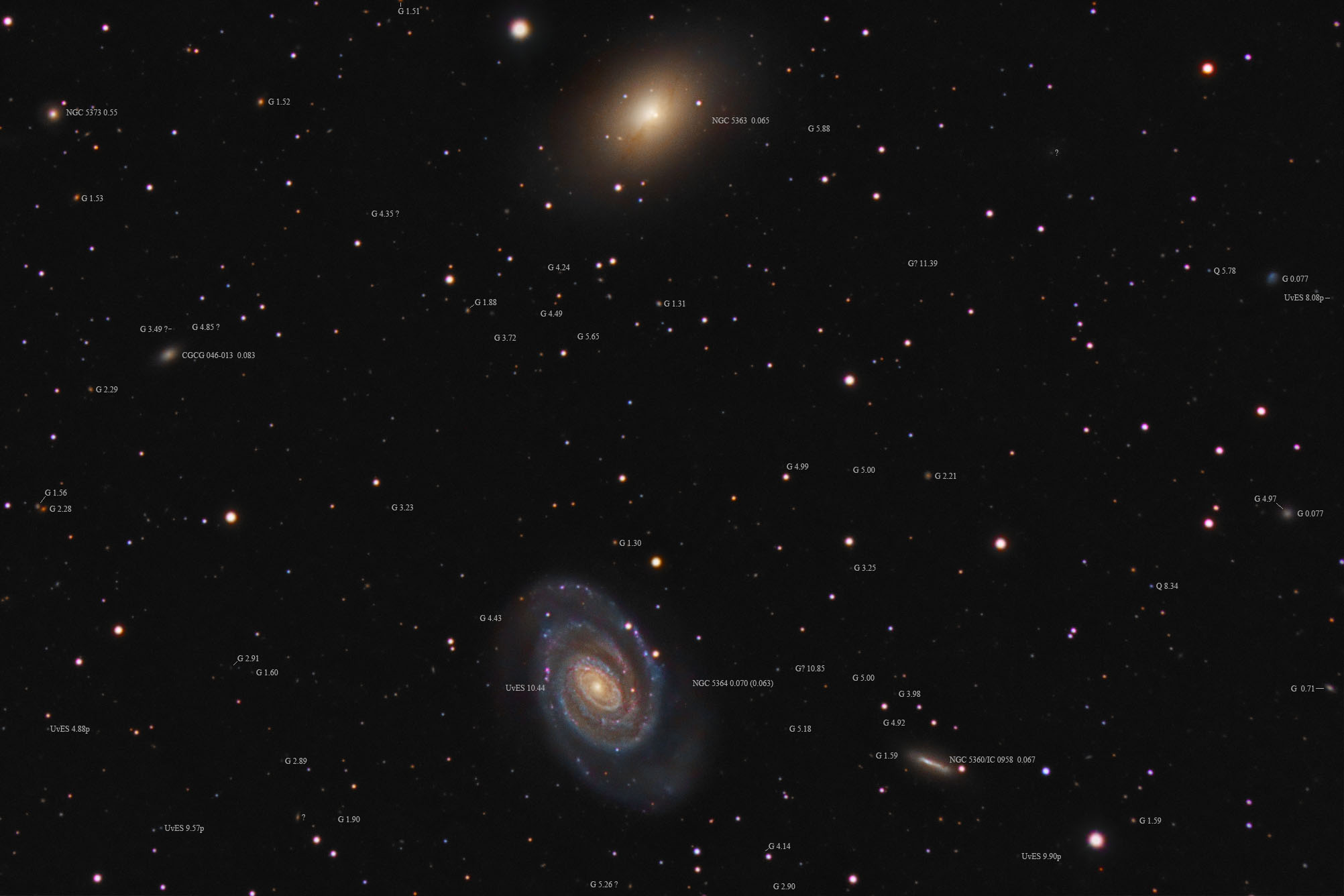 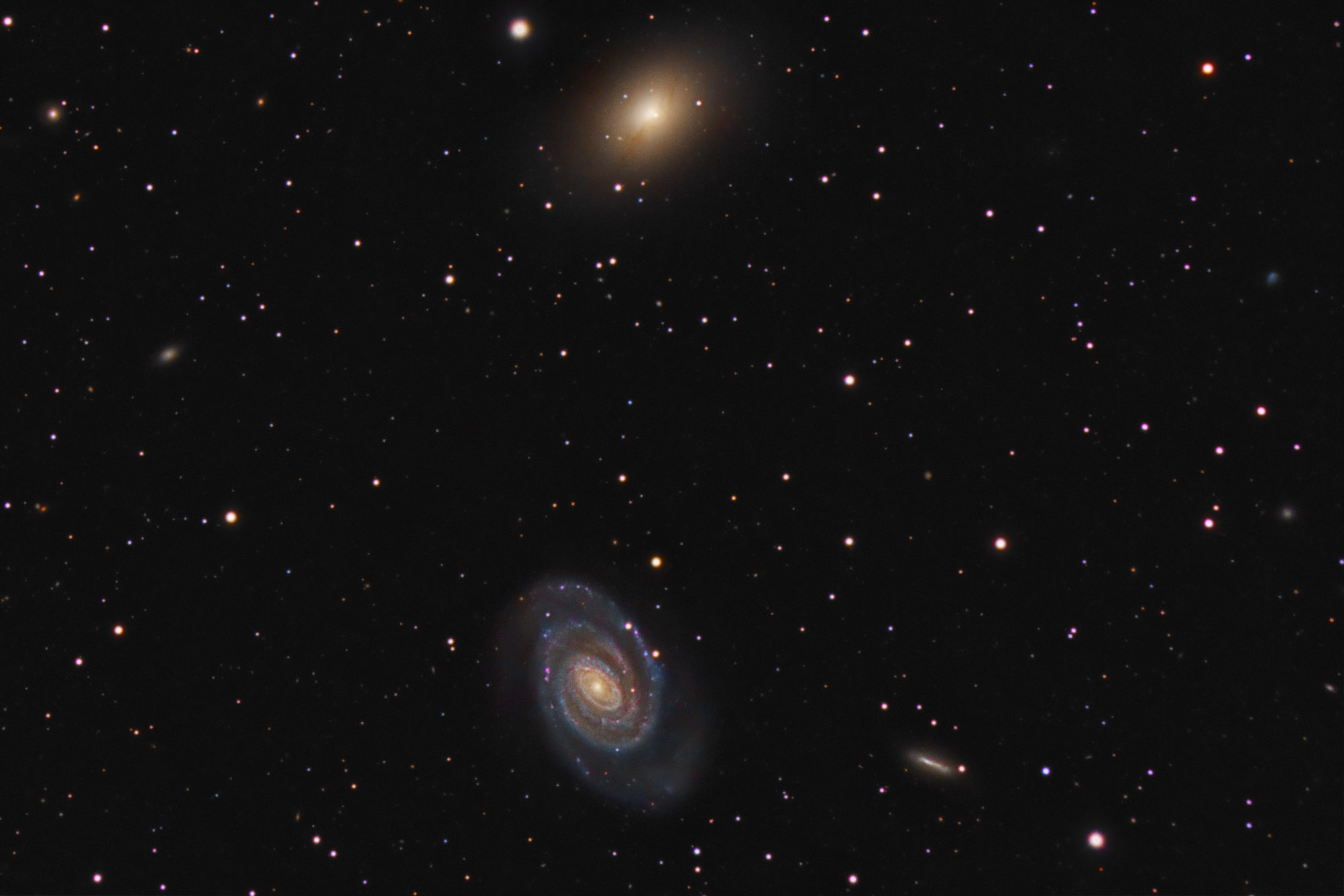