NGC 5383 is a rather strange looking barred spiral in Canes Venatici about 110 million light-years from us. It has two very faint plumes to the east and west sides. Including these the galaxy stretches some 165,000 light-years though the bright region spans only 77,000 light-years, still a respectable size for a spiral galaxy. It was discovered by William Herschel on Apr 9, 1787. While it made the Herschel II observing list that isn\'t what put it on my to-do list. Arp had a category for \"wind effects\" that this one seems to fit due to its windswept appearance. It has been much studied, mostly about how the dust lanes feed the starburst activity around the core at the inner ends of the bar. This has resulted in two round star clouds east and west of the core making it look like it has three cores though the two extras are made up of a few dozen supermassive, short-lived stars. Then above and below the core are two elongated regions of star formation containing far more but not as supermassive stars. In 2005 SN 2005CC was seen at the eastern end of the southern elongated cloud. Its spectrum was quite peculiar. While I found papers on it no one seemed willing to classify it other than say it had similarities to SN 2002CX which is considered a peculiar type IA supernova, whatever that means.

NED lists a quasar candidate (QC) seen through the eastern end of the northern elongated cloud. Their photographic estimate puts it nearly 11 billion light-years distant. It is listed at magnitude 19 which should be obvious but even looking at the Sloan image I\'m unable to pick it out with any certainty. The line drawn on the annotated image points to the pixel with the coordinates given for its position which matches a bright area but it doesn\'t have the PSF of a point source and appears to coincide with a star cloud on raw HST data I looked at. I have some doubts about this one put included it anyway.

To the south is the very low surface brightness UGC 8877 which is classified as being a Magellanic type dwarf galaxy. It is some 33,000 light-years across so a rather reasonable size barred dwarf. It is likely a true companion to NGC 5383 though appears undisturbed so likely isn\'t the cause of the plumes of NGC 5383. I found nothing on their source.

As usual, the annotated image notes all objects with redshift data. When the only designation for the object uses lengthy coordinates I just note its type. UvES again is used for ultraviolet sources that have photographic redshifts indicating they could be quasars. 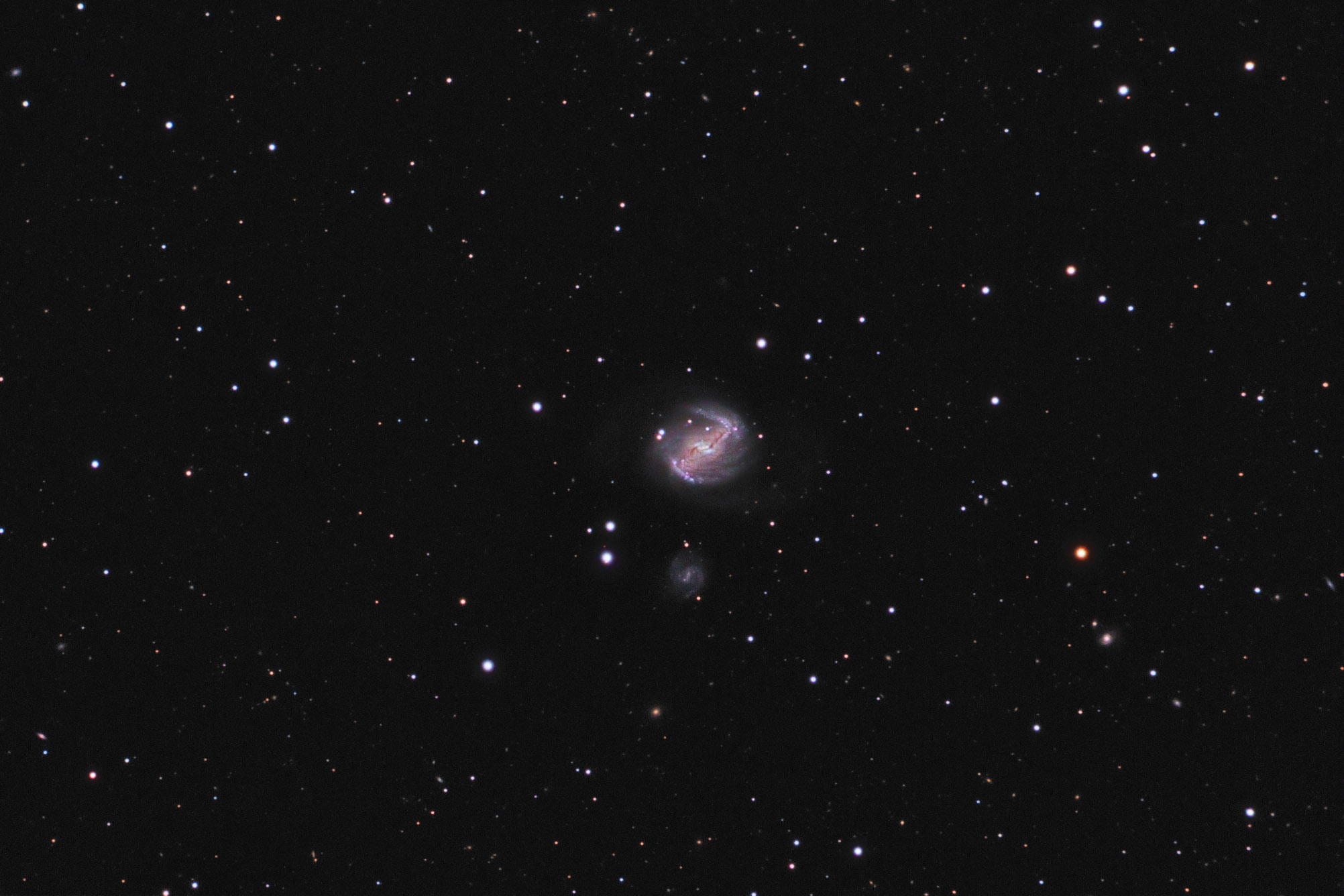 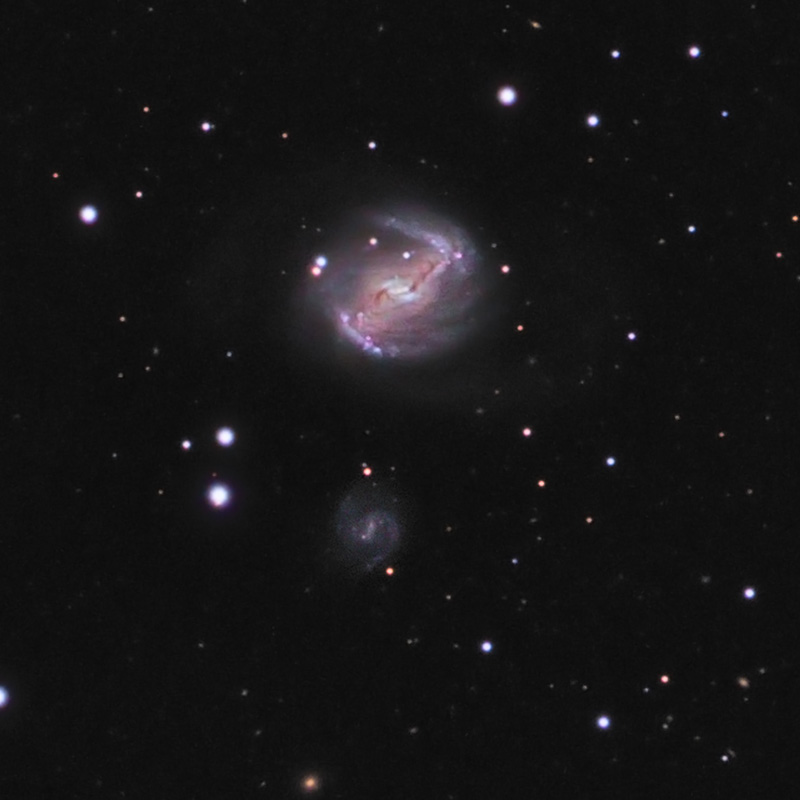 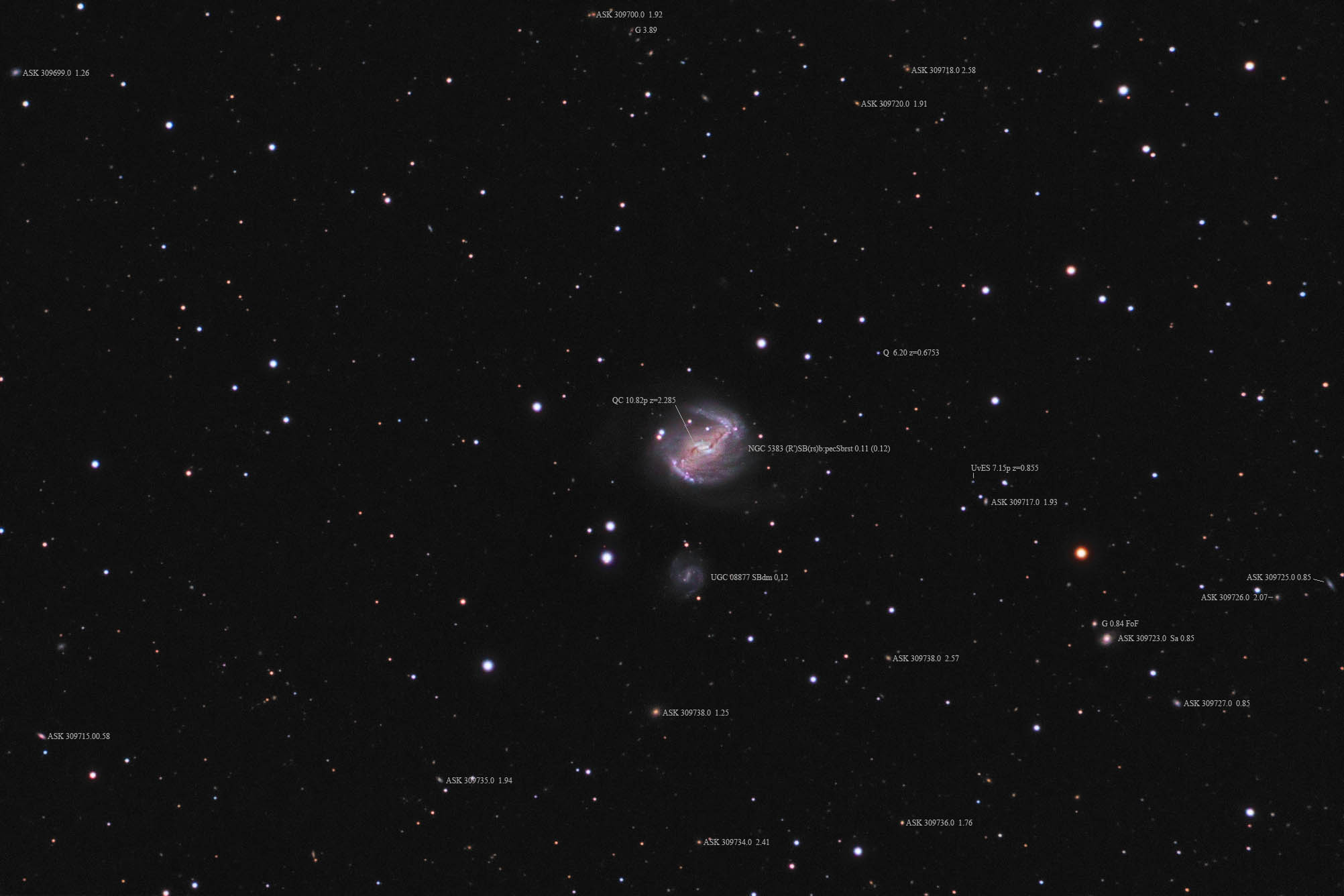