NGC 5403 and its companion MCG +06-31-042 are a pair of galaxies about 130 million light years distant in the constellation of Canes Venatici. MCG +06-31-042 is listed at NED as simply a spiral galaxy though a note at NED calls it a \"compact elliptical object\". NGC 5403 is an edge on spiral that the NGC project classes simply as Sb but NED goes further saying it is a barred spiral with spectral lines SB(s)b: sp. The colon indicates some question about this classification. Being so edge on with heavy dust it\'s not surprising there\'s a disagreement here. It was discovered by William Herschel on May 16, 1787. It isn\'t in either H400 program.

While MCG +06-31-042 appears normal NGC 5403 is rather distorted. The disk is warped with the northern end warped to the northeast and the southern end bent to the southwest. The dust lane is slightly askew from the plane of the disk and there\'s a faint halo all around the galaxy. A second dust lane runs from just left of the brightest core region nearly straight south to the edge of the bulge at an angle to the main dust lane. Are these anomalies due to interaction with MCG +06-31-042? I found nothing either way on this issue. All papers I found are rather mute as to whether these two are interacting. It would take some type of interaction to distort NGC 5403 though this could be due to a galaxy it consumed in the recent past. That might be the short nearly vertical dust lane is debris left in the path of an infalling companion it ate recently -- or not. Notice the very faint blob just below the lower end of the galaxy. Could that be the remains of its last dinner? Seems possible to me but again, I found nothing in the literature on it.

There\'s a possibility NGC 5378 (not yet imaged by me) is involved. It has about the same redshift and lies about 42 minutes of arc to the southwest. It is a somewhat distorted looking fuzzy ringed barred spiral. I suppose they may have interacted in the past causing both to be slightly distorted. In that case, MCG +06-31-042 is just an onlooker. Also Arp 84 the \"Heron eating a fish\" pair of interacting galaxies is only 47 minutes south-southwest. It is not likely involved being somewhat further away by redshift. In any case, this is a region of interesting galaxies.

There are a couple of galaxy clusters in the image. NED had spectroscopic data for the Bright Cluster Galaxy but only photometrically determined redshift for the cluster (noted with a \"p\" in the annotated image). In these cases there is rather good agreement between the two. 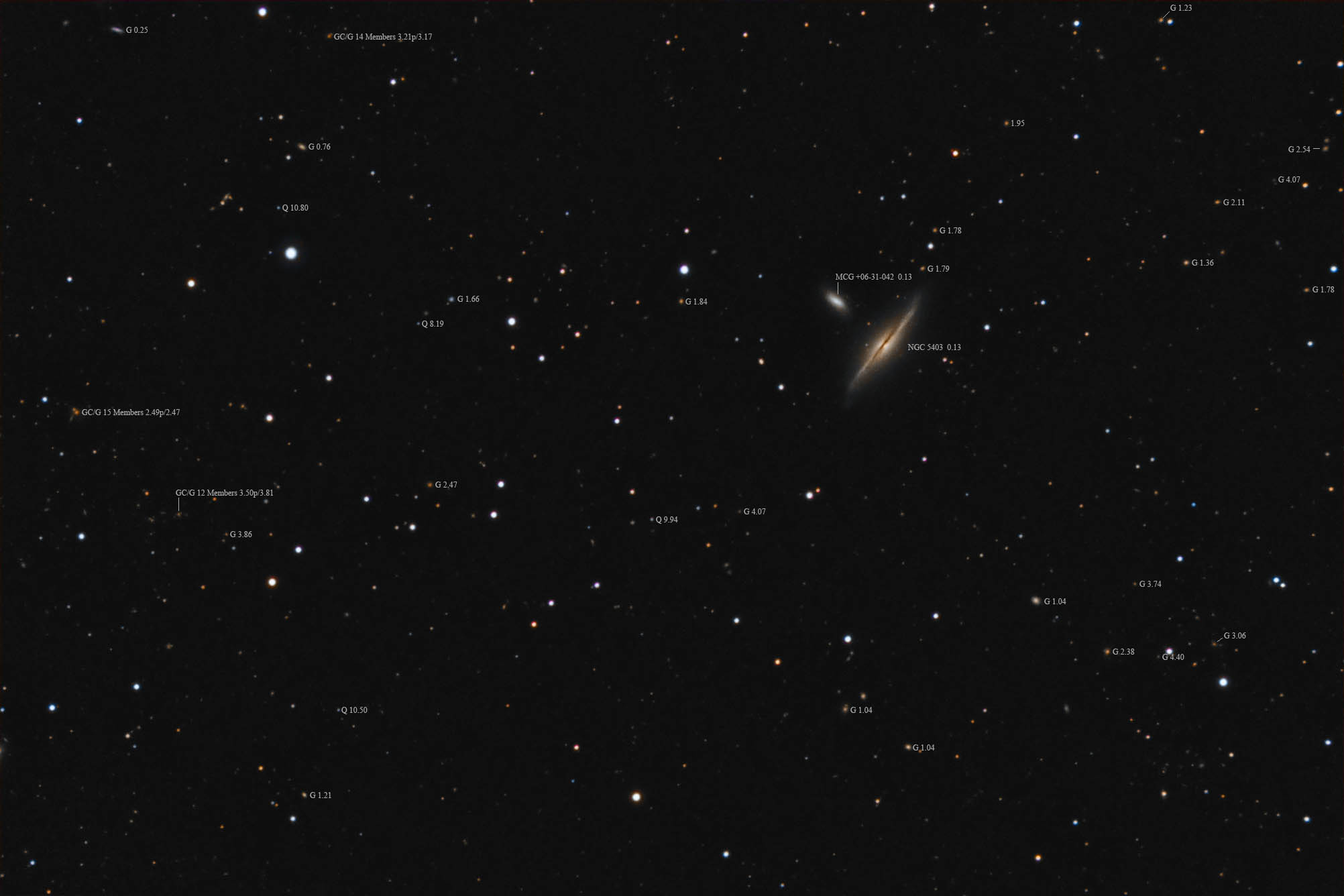 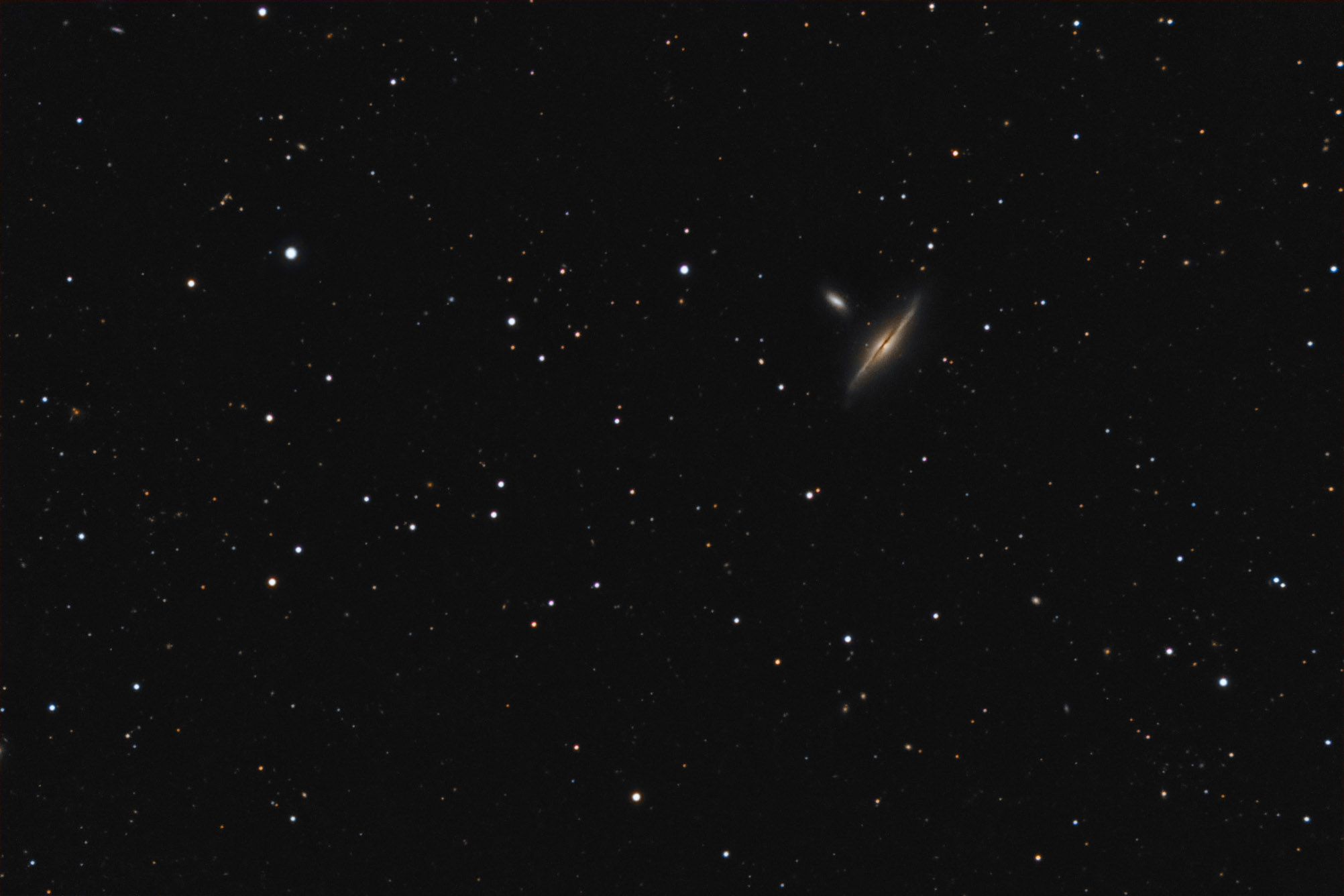 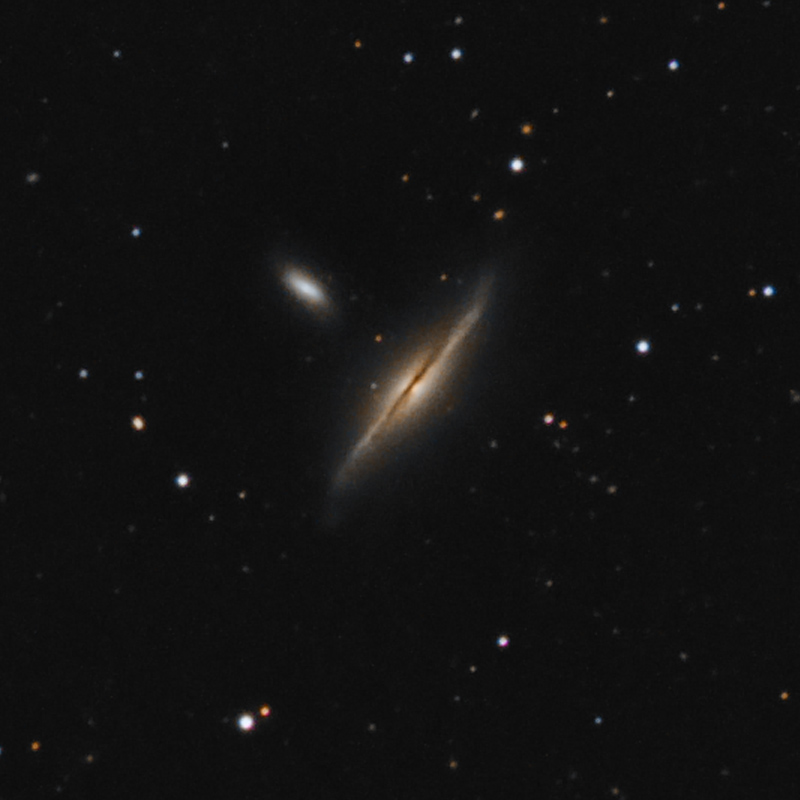