These two NGC galaxies are located in northeastern Virgo about 90 million light-years away. At one time there was some disagreement as to whether these two were interacting. Now it has been pretty well decided they aren\'t interacting. I certainly see no indication of it. Both were discovered by William Herschel on April 30, 1786. Only NGC 5638 is in the second Herschel 400 observing program. NGC 5636 appears too faint for the program. Unfortunately, my notes from that got lost in the move to Minnesota. I can\'t recall if I saw NGC 5636 or not. NGC 5636 is a barred spiral while NGC 5638 a classic elliptical. Both are rather red and dead. I see some hint of new stars in NGC 5636 but not many. Something seems to have killed most star formation in this galaxy.

The field has three other rather major galaxies, UGC 09310 to the east is very blue and about the same distance as the two NGC galaxies. So why does it still have star formation while the other two have little star formation? I found no indication it has interacted with either of the NGC galaxies but it sure is distorted as if something nailed it in the recent past.

The other two galaxies are UGC 09277 and UGC 09285. The former shows little sign of current star formation. The latter has some blue stars indicating star formation, while weak today was common a billion years ago or so. UGC 09277 is half the distance of the other galaxies while UGC 09285 seems to be part of the same group as the other larger galaxies.

While I call these \"major\" galaxies that is only because they stand out in the image. None are really large, even the elliptical. Assuming they are at about 90 million light-years I measure them at:

The field has several other odd galaxies. Southeast of UGC 09277 is the blue smudge of SHOC 466. That catalog is the SDSS HII galaxies with Oxygen abundances Catalog. Then there\'s the ELG (Emission Line Galaxy) north of UGC 9310. NED puts it at a distance of over 6 billion light-years yet on a rather poor night for transparency I picked it up. That I can do that on a rather poor night seems impossible. I wonder if it isn\'t a veiled quasar or another such galaxy such as a BL Lac object.

To the southeast of the ELG is ASK 100527.0. It is a very large spiral at 145,000 light-years in size. It also has a surprisingly bright core region. That is red but the two arms are blue. Another large and even more distant galaxy is in the northeastern corner of the image. NED shows it at 4.33 billion light-years. Since that was determined photographically with filters rather than spectroscopically the distance is somewhat questionable. If right it too is very large at 150,000 light-years in size. The entire galaxy appears to be blue. It must really be very blue to survive reddening at that distance.

One asteroid put in an appearance. See the annotated image for details. 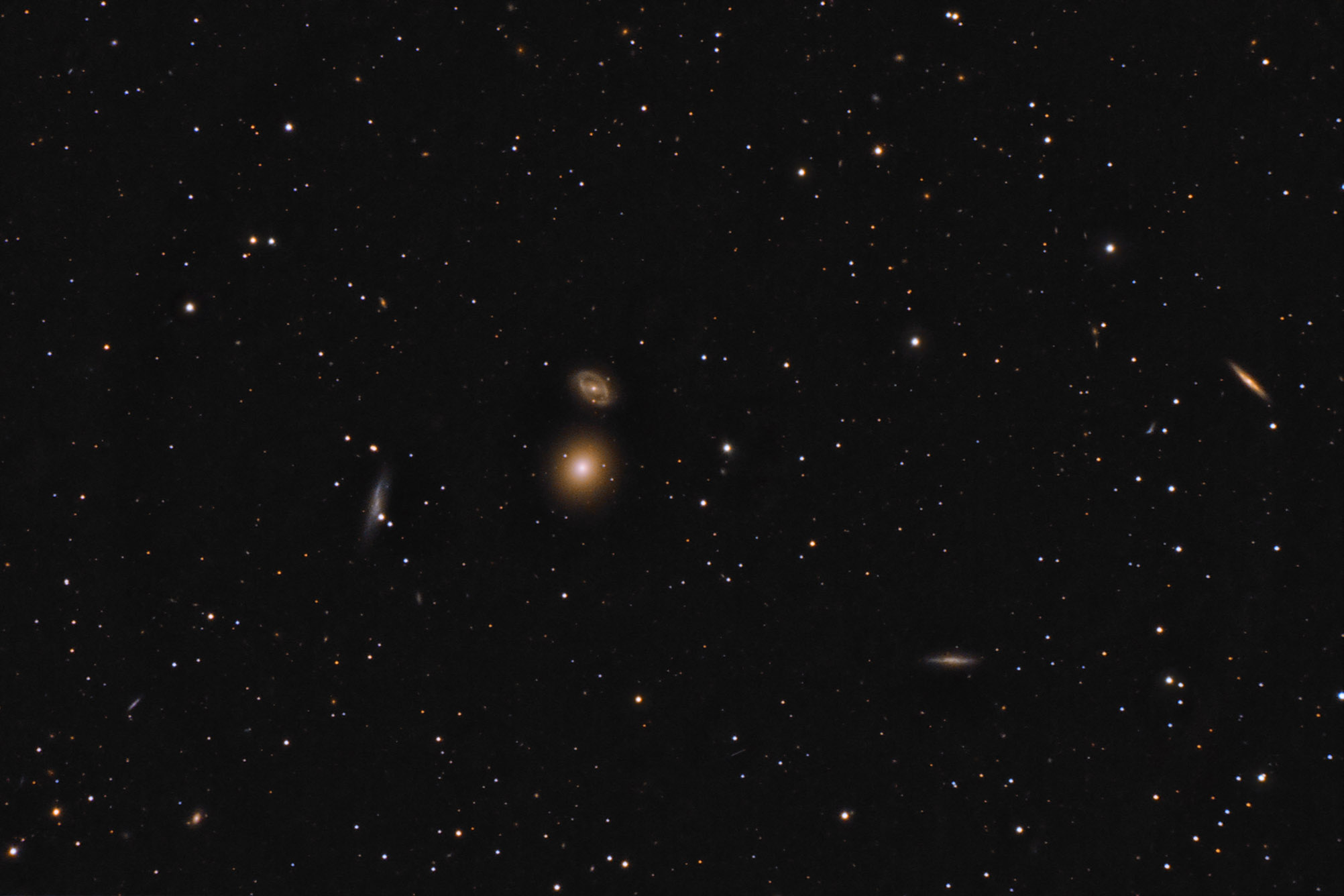 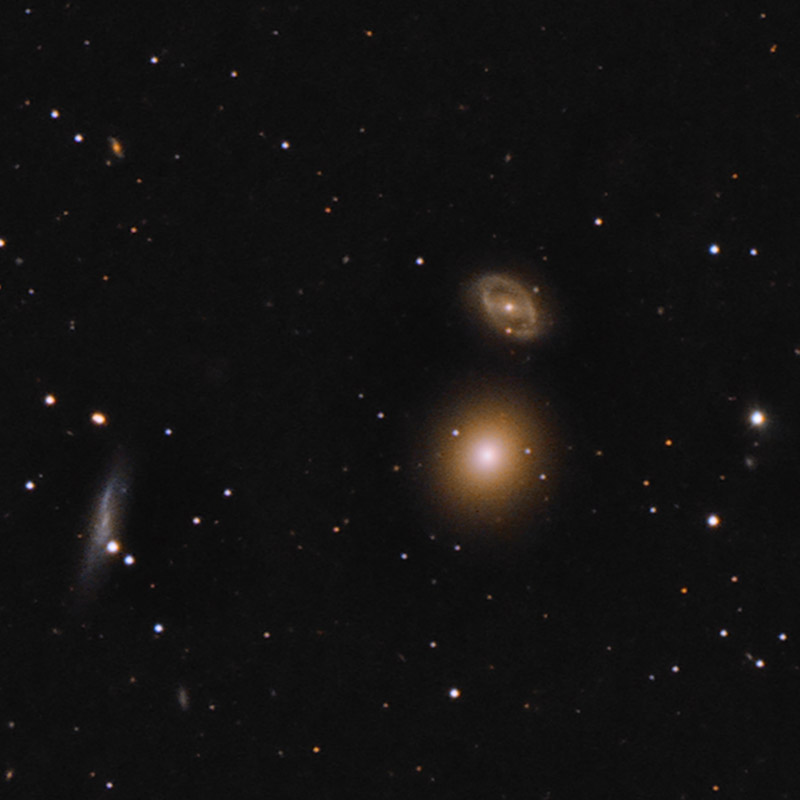 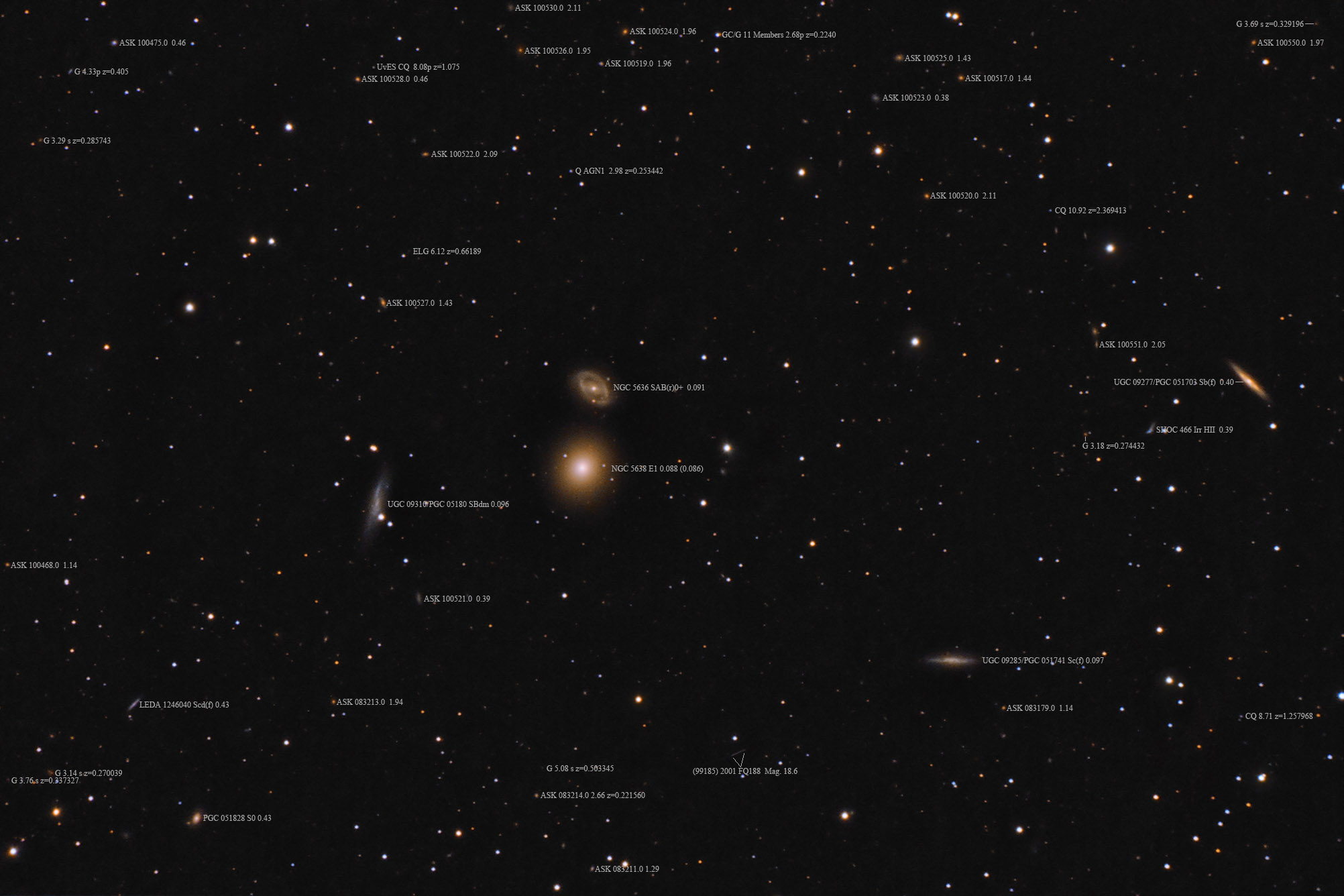