NGC 5668 is a nice nearly face on spiral galaxy in Virgo. It is well studied by the pros with over one hundred recent papers including it. Yet I was shocked to find not one amateur image of it on any forum I checked and only a half dozen or so amateur images on websites I looked at or Google turned up.

It is classified as an SA(s)d galaxy a bit over 80 million light-years distant. Several papers say it has a young short (about 12 arc second bar) though that isn\'t in any classification for it that I saw. It appears to have a lot of current star formation going on throughout the galaxy though much of its disk is surprisingly fain but for its arms.

NGC 5668 was discovered by William Herschel on April 17, 1789. It is in the second Herschel 400 observing program so shouldn\'t be totally lost to at least visual amateur astronomers.

NED lists a blue object to the east-northeast of its core as a separate galaxy. I\'ve noted it in the annotated image. I have trouble with this as it looks like a star cloud in the galaxy in my image and the Sloan image I checked. Redshift puts it at a similar distance though I suppose it could be the remains of its last galactic meal.

NED listed several hundred objects, mostly galaxies and quasar or quasar candidates in the image. I couldn\'t begin to annotate them all without the image being a mass of labels. So I mostly limited my annotation to brighter objects but for a few very distant objects NED said were galaxies but are so distant I have to wonder how I picked them up as this wasn\'t a great night for transparency. For example, there\'s an Emission Line Galaxy (ELG) just southeast of NGC 5668 that NED puts at 8.38 billion light-years. I can\'t imagine even with great transparency I could pick up any galaxy in 40 minutes of luminance data at that distance. I\'ve added (Q?) to its label as I have to wonder if it is not a quasar or a veiled quasar (one in which the galaxy\'s dust mostly hides the quasar at its core) rather than just a galaxy with emission lines.

I found a surprising number of quasars and quasar candidates in the image. While I annotated only a few of the fainter galaxies and emission-line galaxies I did include all NED indicated are or likely are quasars.

One asteroid put in an appearance. Two others were just out of the frame at the bottom. 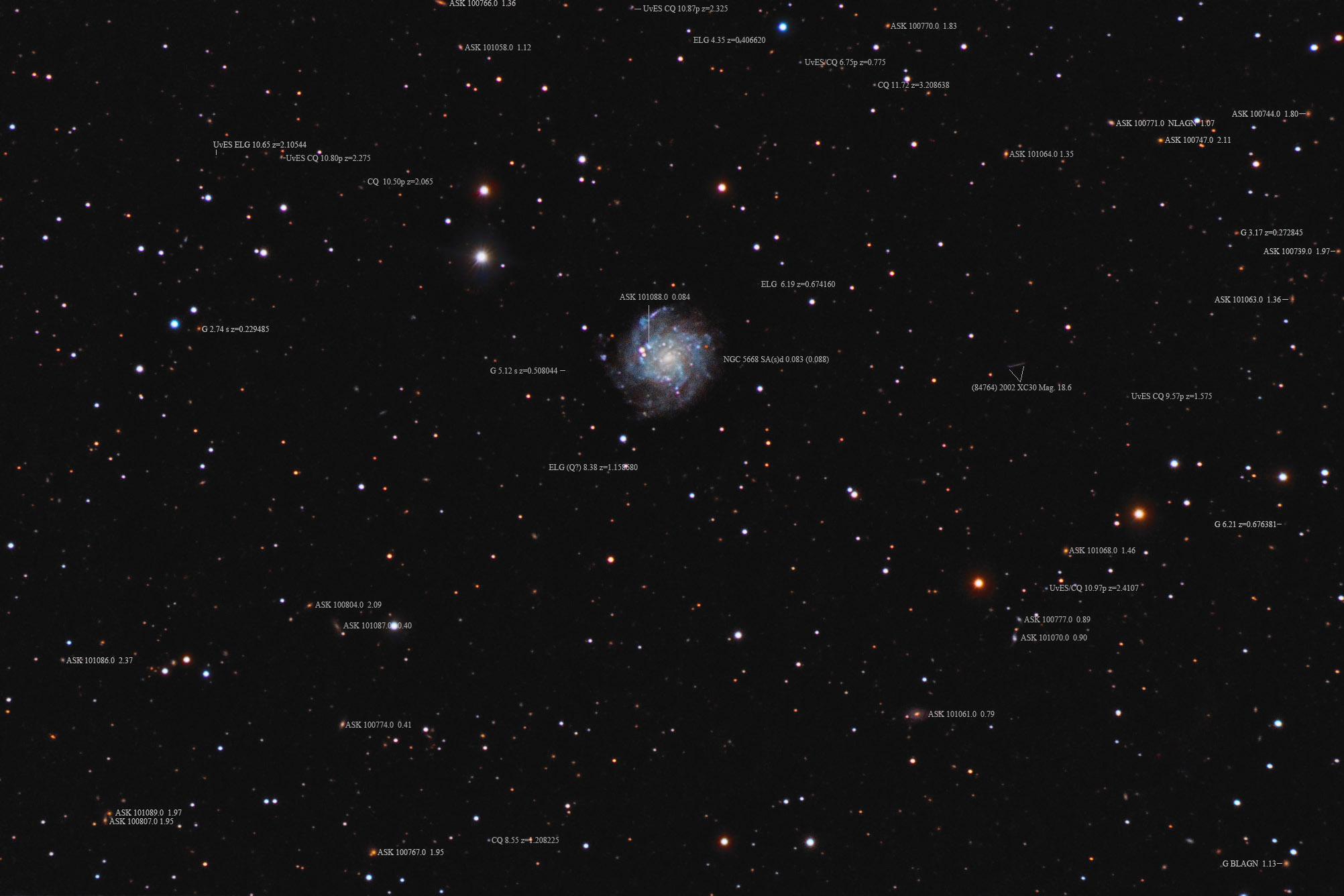 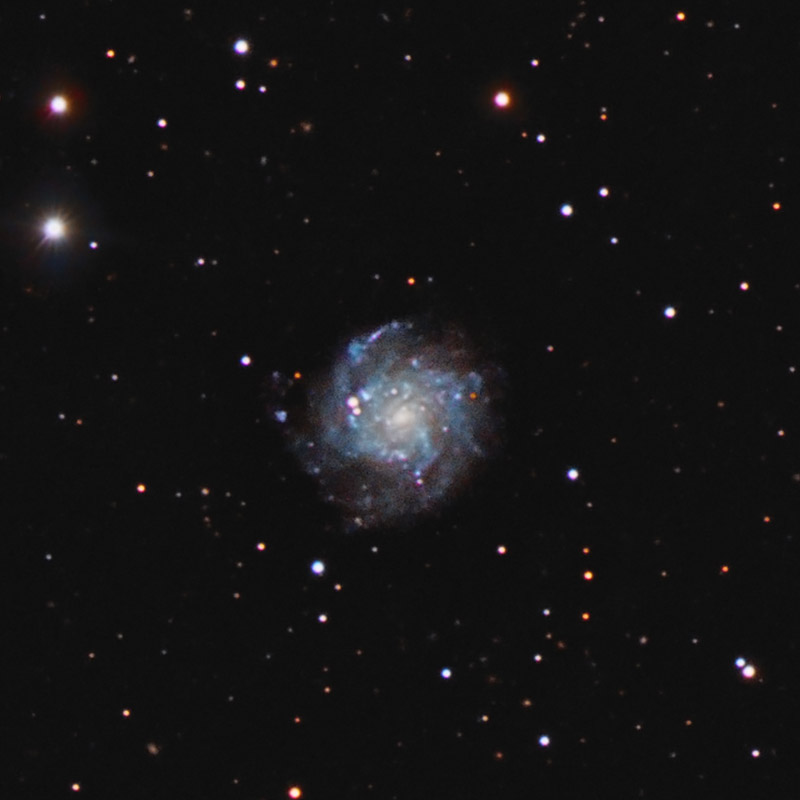 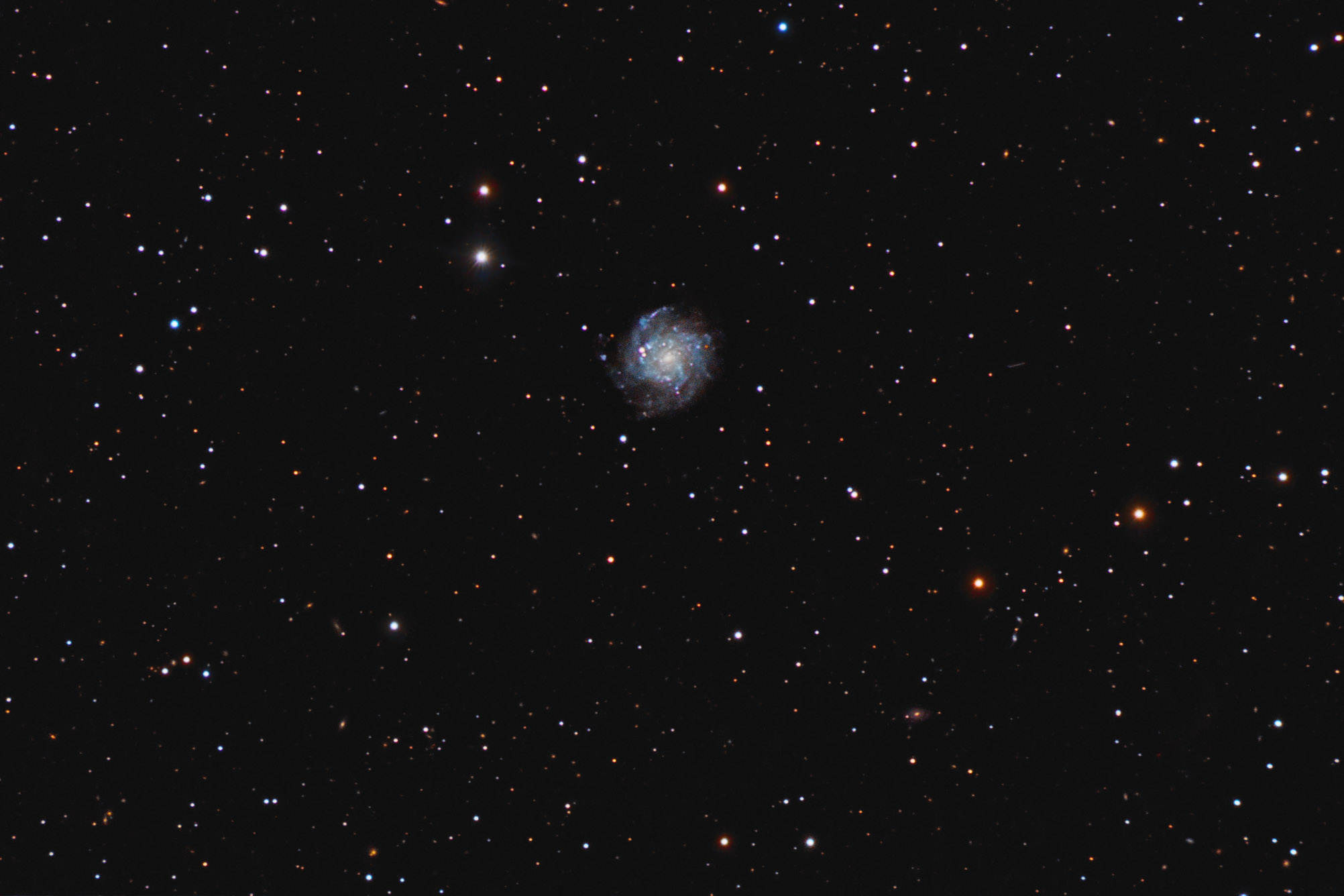