NGC 5850 and NGC 5846 are a pair of large galaxies in far eastern Virgo not far from M5. NGC 5850, at first glance, appears like a normal barred spiral but look closer. It is an oddball in that it is a double barred spiral -- A barred spiral inside a barred spiral. NGC 5846 appears to be a rather ordinary large elliptical galaxy but again, looks are deceiving. It is sloshed and has no defined core (I wasn\'t able to show this, however) and has other unexpected features. How do you explain these two oddities?

One way is to assume they have had a high-speed collision. At least that\'s the opinion of one paper. http://iopscience.iop.org/1538-3881/115/1/80/fulltext/ But this assumes they are at about the same distance. NGC 5850 is 126 million light-years distant by redshift but non-redshift distances average out to about 65 million light-years. One non-redshift measurement says 92 million. Quite a difference. NGC 5846 is 88 million light-years by redshift and 84 million by other means. This is a good agreement. Note the paper considers this a high-speed interaction so the large redshift of 5850 may just reflect a high speed through the Virgo Cluster.

I mentioned NGC 5846 while looking normal, it really isn\'t. You can read about these issues at this poster http://cxc.harvard.edu/cdo/xclust11/posters/Machacek_Marie.pdf . It doesn\'t mention NGC 5850 as being the cause, however. It does indicate that its companion NGC 5846A is being stripped by ram pressure as it falls into NGC 5846.

I\'m going to assume that lone non-redshift of 92 million is closer to the truth for NGC 5850 and assign a distance of 85 million for both on the assumption the article on their interaction is correct. That would make it a very large spiral of 150,000 light-years in diameter. It is classified as SB(r)b by NED. But I think it should be SB(r)(r)b if such a classification was legal. The first ring being the ring formed around the large bar where the two arms virtually overlap creating a pseudo-ring. The second for the small one around the inner bar. This ring is a bit indistinct at one point on the east side. It too comes off the ends of the inner bar which is rotated about 60 degrees clockwise from the large bar. A dark dust lane seems to outline this inner ring. Many when imaging this galaxy blow out the core missing this hard to explain inner structure. Is this inner barred spiral due to interaction with 5846 or something else? I found nothing that explained this though several sources noted the 60-degree rotation of the inner bar. Some sources consider the odd blue somewhat radial streak at about 5 o\'clock to be an edge on spiral. NED lists it and the below center blob in the streak as two separate galaxies but provides no redshift data.

NGC 5850 was discovered by William Herschel on February 24, 1786. It is in the second Herschel 400 list. While I note seeing it when observing NGC 5846 I gave no description. Herschel found NGC 5846 the same February night. It is in the first Herschel 400 list. I guess I wasn\'t very impressed with either as I just say it is a round, bright puff of a galaxy with NGC 5850 in the same 120x field. NED gives a size of 4.1\' for its longest diameter. On my FITS frames, it fades out making the edge impossible to determine. I set an arbitrary level of 25 ADU higher than background for the edge which is conservative. I get about 7.05\' for the maximum diameter and see hints out much further. Using the 7.05\' size it and 85 million light-year distance it is about 175,000 light-years across, likely I\'d get least 200,000 in a longer exposure.

The only other NGC galaxy in the image is NGC 5845 which has a similar redshift to 5846. I didn\'t catch all of it as for some reason I told the software to aim at 5850 rather than halfway between 5850 and 5846. It too was discovered by William Herschel on that same February night but didn\'t make either list nor did I mention it when recording 5846. Redshift indicates it is likely related to NGC 5846. It is classed simply as E:. Since I didn\'t pick it all up I can\'t measure its size on my frame. Using the size given by NED of 0.8\' and assuming it is at about the same distance as 5846 then it is 20 million light-years across.

Near the left edge of my frame is CGCG 021-013. It is listed as S0/a by NED. Yet a note at NED reads: \"One SDSS position refers to the eastern knot in the bar.\" This obviously refers to the blue blob at the left end of \"the bar.\" Odd that it isn\'t classified as having a bar! Nearby is CGCG 021-015 which, while listed as Sbc is so fuzzy I can\'t see any real structure to it, just fuzzy patches that overlap. Is it two interacting galaxies?

ELG seen for many objects stands for emission line galaxy. These tended to be far fainter than their magnitudes in NED would indicate. There were so many and most so faint after a bit I just stopped annotating them unless they were reasonably bright (rare). Most galaxies had only positions for catalog names that were so long that with so many of them they\'d have filled the image making labels nearly impossible. Others while having names had ones so long they were sometimes even longer than the positional names. I couldn\'t begin to fit these in and only list them as G with their distance or Q for quasar or UvES for Ultraviolet Excess Source which really means candidate quasar with only a photographic redshift (noted with a \"p\" after the distance estimate. That applies to the z value as well. Even though the field was near the celestial equator where I\'d expect at least a couple asteroids none showed up. 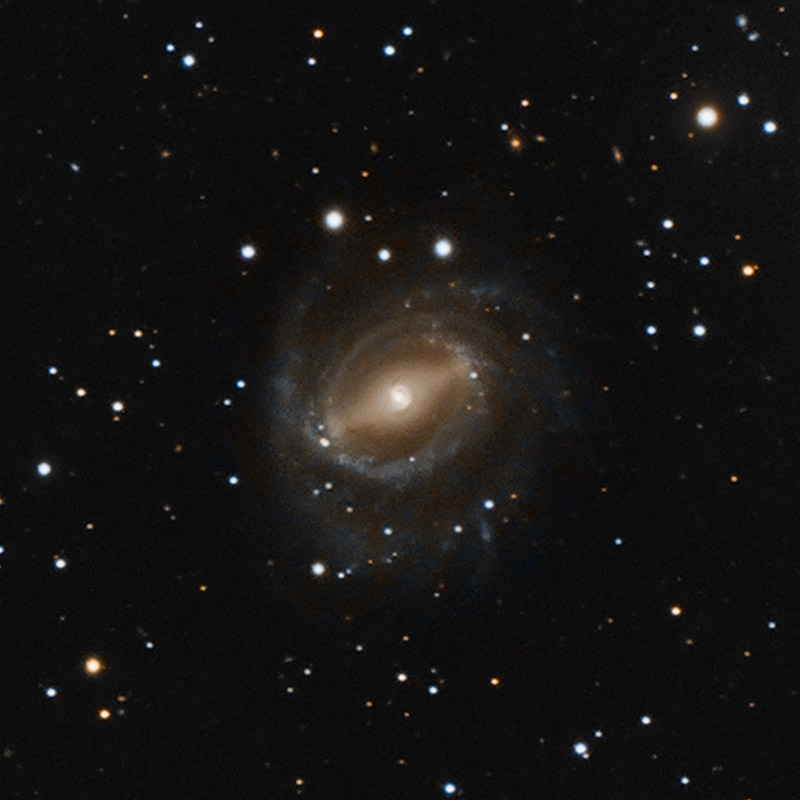 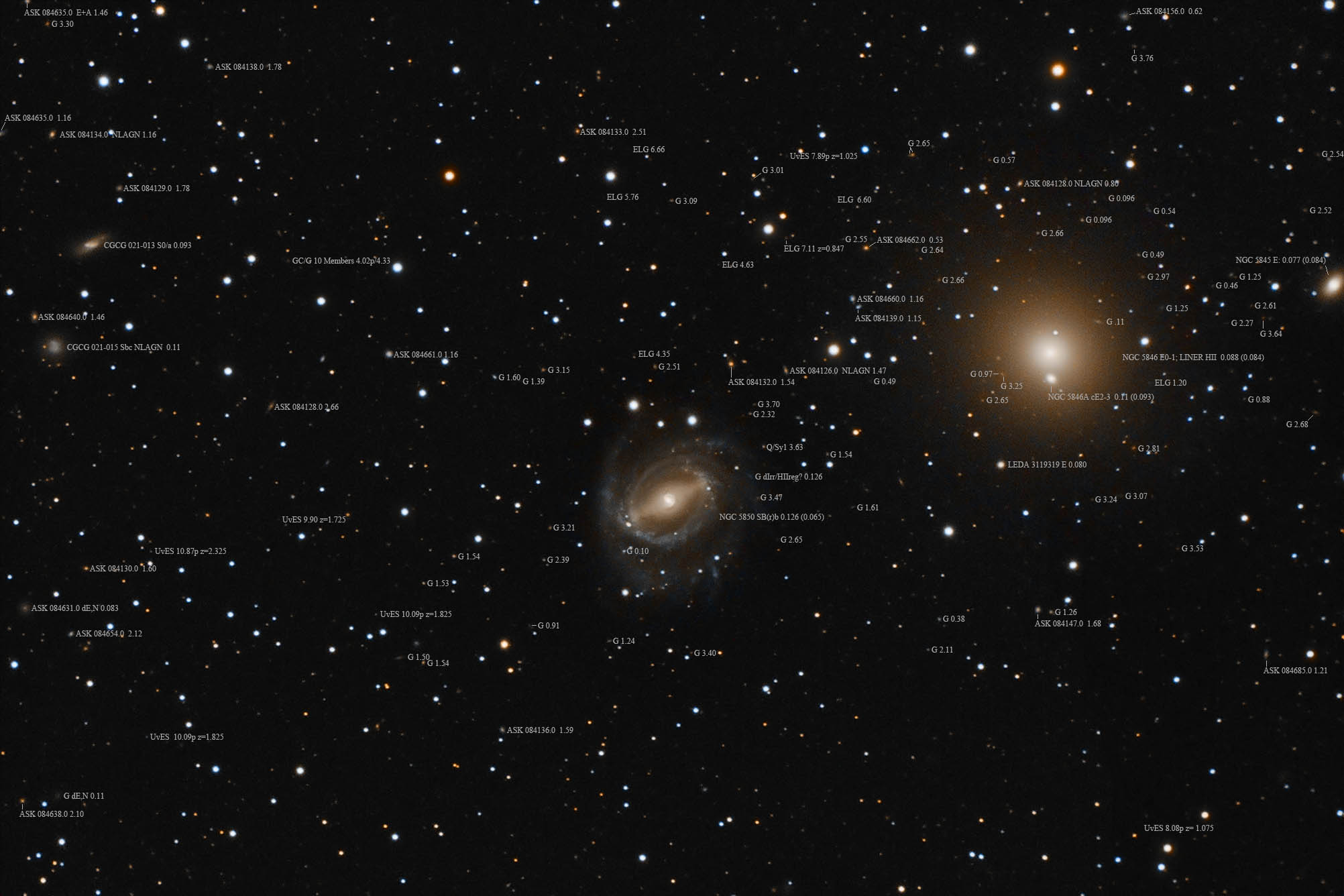 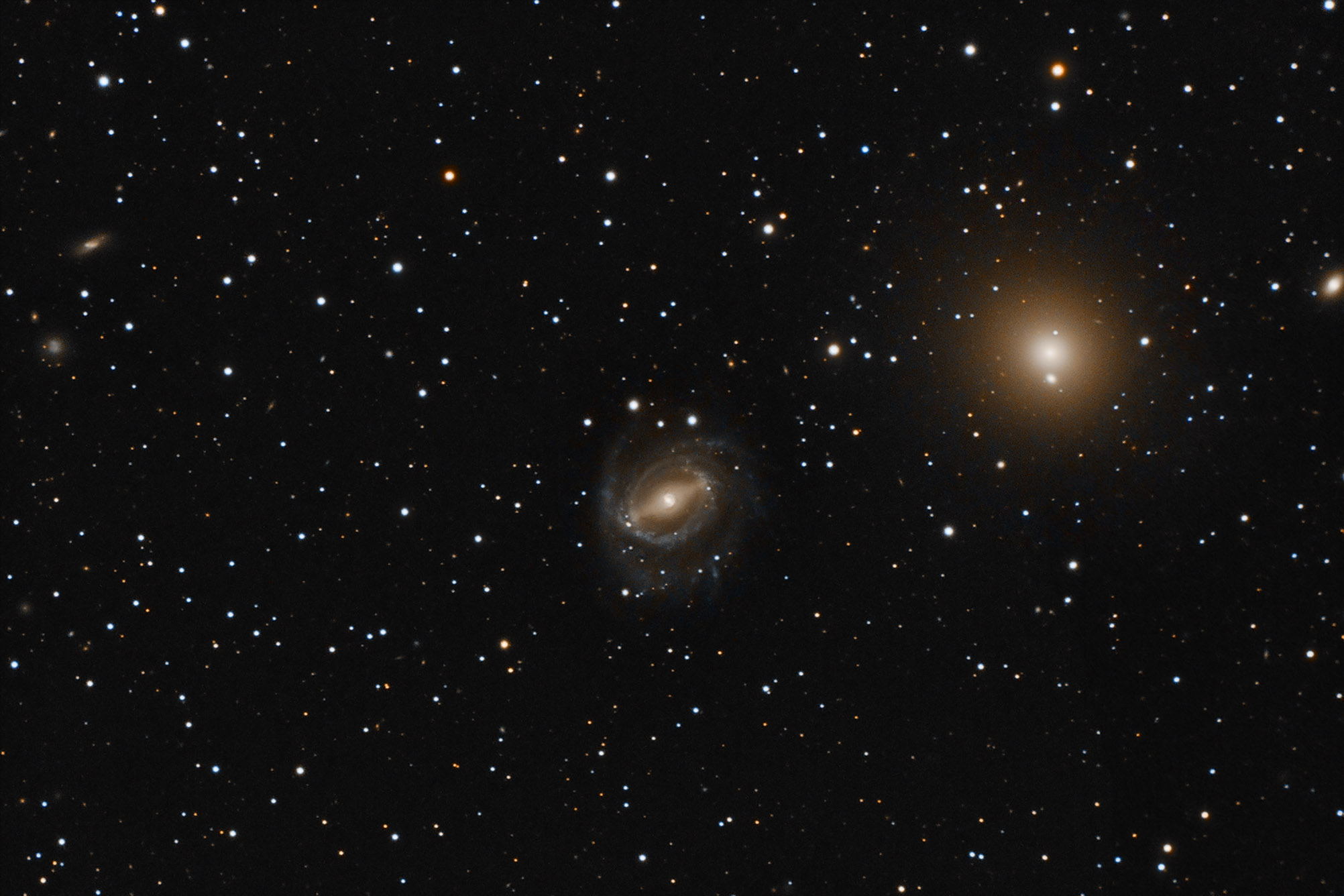