NGC 5860 as a pair (one source says trio) of colliding galaxies in Bootes about 250 million light-years from us. I\'ve labeled the southern galaxy as NGC 5860A and the northern B though I didn\'t find any such formal designation. NED uses Notes 1 and Notes 2. This appears to be a rather old system in that the stars are mostly white rather than blue. Both maybe starburst galaxies. One note at NED says they are; \"...a merging pair with fading starburst signatures.\" Though NED itself doesn\'t mention any starburst activity for the individual galaxies, it does say of the combination, Star-burst nucleus\" and classifies the combination as S?. The pair was discovered by John Herschel on May 1, 1828.

There are two somewhat blue condensations in the Sloan image that appear white in mine. The difference is possibly due to the Sloan data containing a near Uv channel that would add strong blue light I don\'t see as my filters block Uv light. The one in 5860B is to the northeast while the one to in 5860A is to the northeast. I mentioned one source sees this system as a triple. It identifies the blue knot around 5860A as the third galaxy. I\'ve noted it in the annotated image. No other source seems to consider this object a separate galaxy. To me, it seems virtually identical to the other blue knot. NED lists 5860A and B simply as E. The NGC project lumps them together and classifies the two as S0.

The field has one other galaxy at the same redshift as NGC 5860. It is on the far left above center. It is KISSR 1910 and is listed at NED as being a starburst galaxy. All other galaxies in the field lie well beyond these galaxies, often billions of light-years beyond. I\'ve noted 4 major star clusters in the image. There were several others in NED listed as being candidate galaxy clusters but had no count, diameter or even a hint at where the anchoring galaxy was. For those listed all used photographic redshift measurements for the cluster itself but a couple used spectroscopic distance measurements for the Bright Cluster Galaxy. Another used the same photographic measurement for both (listed as GC/G but with one distance, not two. The fourth didn\'t have any redshift data on its BCG so while the label is beside the apparent BCG it is labeled only GC with one distance measurement. There was only one quasar listed for this deep field. It isn\'t listed as being much further away than some of the galaxies at 5.65 billion light-years. 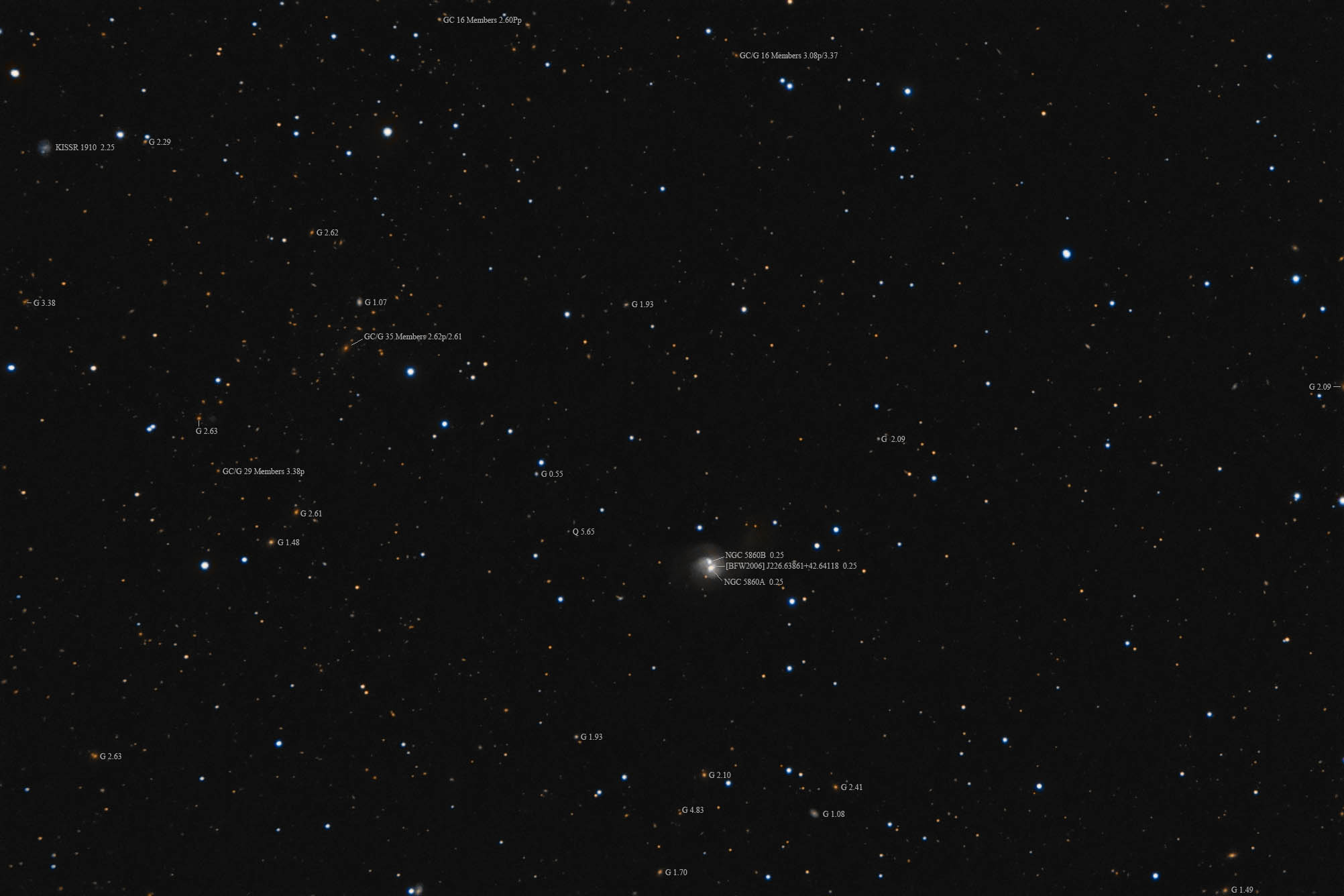 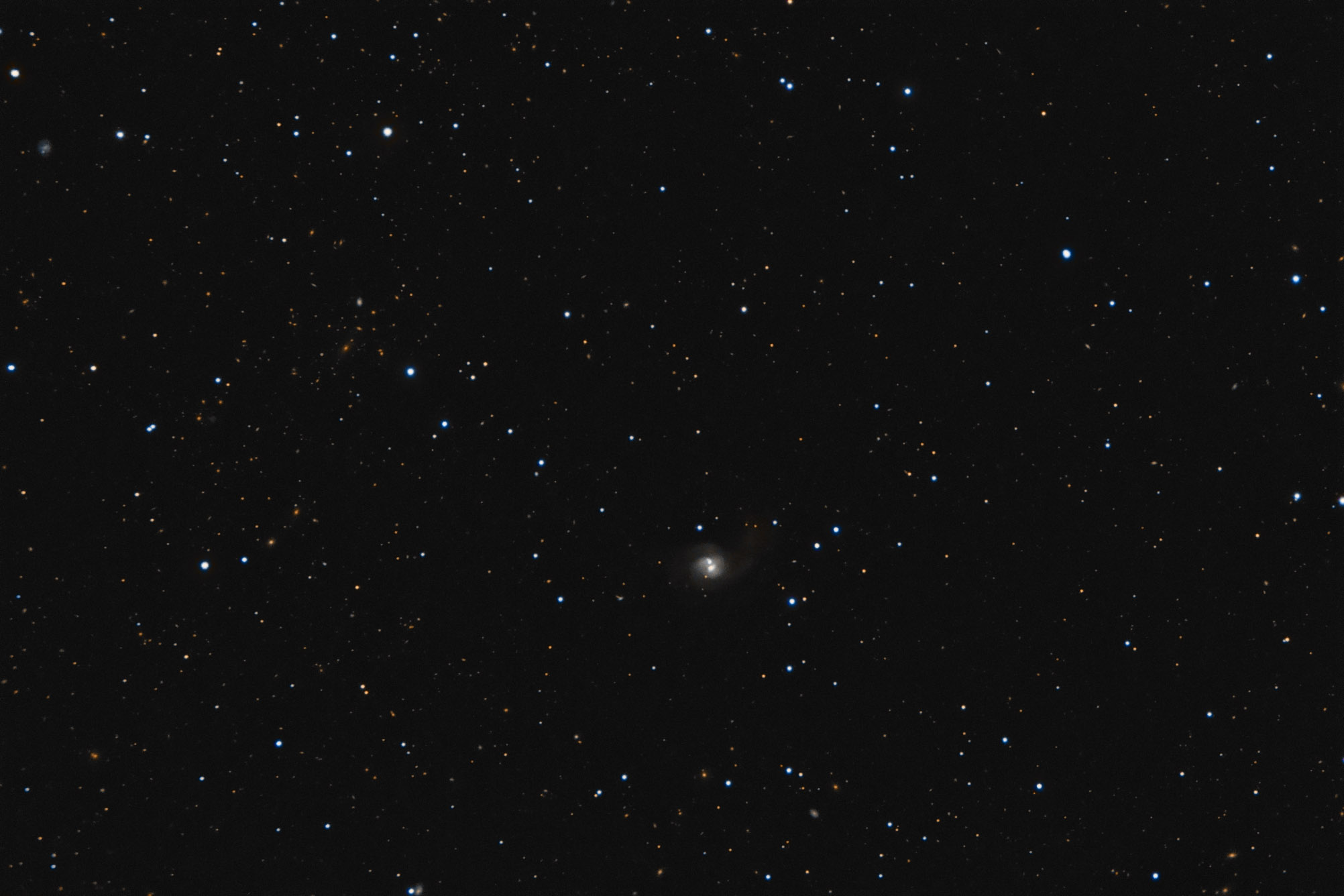 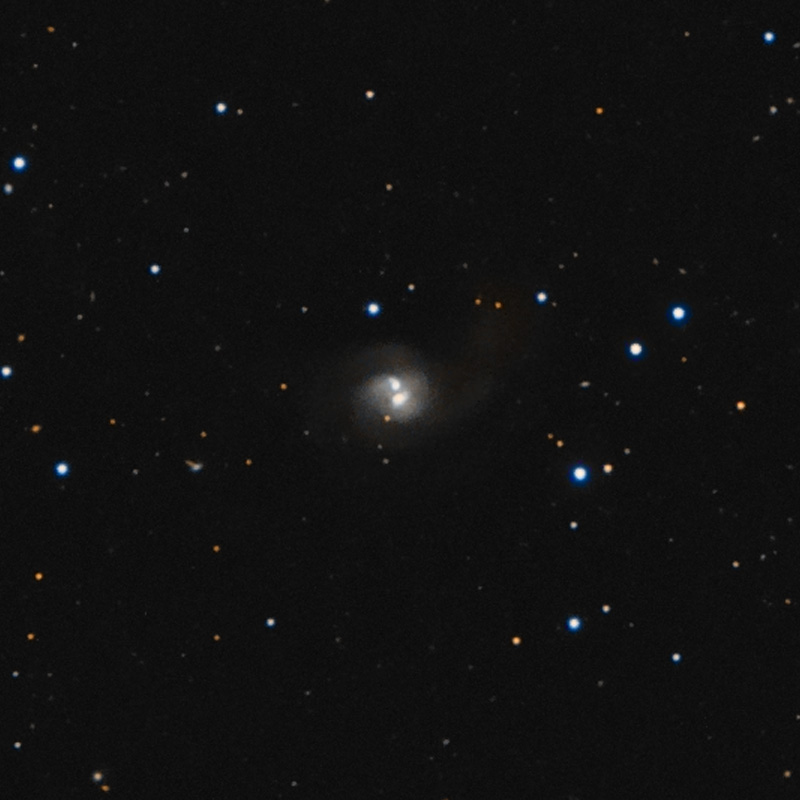