As most know by now I like to go where most amateurs fear to tread. Back in the fall of 2008, it was announced that a Dutch school teacher, Hanny van Arkel, looking at Galaxy Zoo images saw something odd. Hundreds had looked at the same image before her but she was the only one to wonder \"What\'s that?\" and post the question. It turned out to be a green object outside the obscure galaxy, IC 2497. It was bright green though on the Sloan images it was blue. At the time it was a mystery. Fortunately, the moon was out of the sky and it was well placed so I gave it a try to see if I could pull it out. Digital imaging was still new to me and I wanted to test its limits. It turned out to be relatively easy, not a difficult test after all. Still, it became the first amateur image of it as far as I and Hanny could determine. A check of Google images fails to turn up an amateur image of it even now. Though it misses many posted to Flickr and the like. Still, it surprises me a unique but rather easily imaged object is so ignored by most amateur imagers. It was later determined to be a cloud of mostly ionized oxygen illuminated by a now faded QSO in the heart of the galaxy, possibly left over from something IC 2497 digested. Were there others? Galaxies devour their kind constantly so it seemed likely.

Back in April 2015, the HST group announced they had found similar objects lit by a few other galaxies now vanished quasars so it wasn\'t unique after all, just very rare. One of their discoveries, NGC 5972, was well placed in my sky in late May so I had to give it a try. Like Hanny\'s Voorwerp (voorwerp is Dutch for \"object\") these are green. Due to late May skies allowing me only time for one of my typical 100 minute image runs in dark skies I took one round of data on it. I expected more would be needed as this is much fainter than Hanny\'s Voorwerp. I was wrong. I may not have HST resolution but much of the green object is seen. Yet again it wasn\'t as difficult as I expected.

It is thought these are gas clouds lit by light echoes of long-faded quasars in the heart of these galaxies. I am guessing they are blue in the Sloan image because those include ultraviolet mapped to deep blue along with blue mapped to a lighter blue. This Uv light may be stronger than the green or blue causing the color shift. In my pure LRGB image, the green is the natural result even after I subtract green from airglow I have in my images. The green is apparently due to OIII shifted by cosmological redshift from its normal teal to green. The shift is too great to allow standard OIII filters to be used on these so I\'ve not attempted that.

You can read more about these Voorwerpjes (Dutch for \"objects\") at http://www.skyandtelescope.com/astronomy-news/hubble-finds-ghosts-of-quasars-past-042215234/ 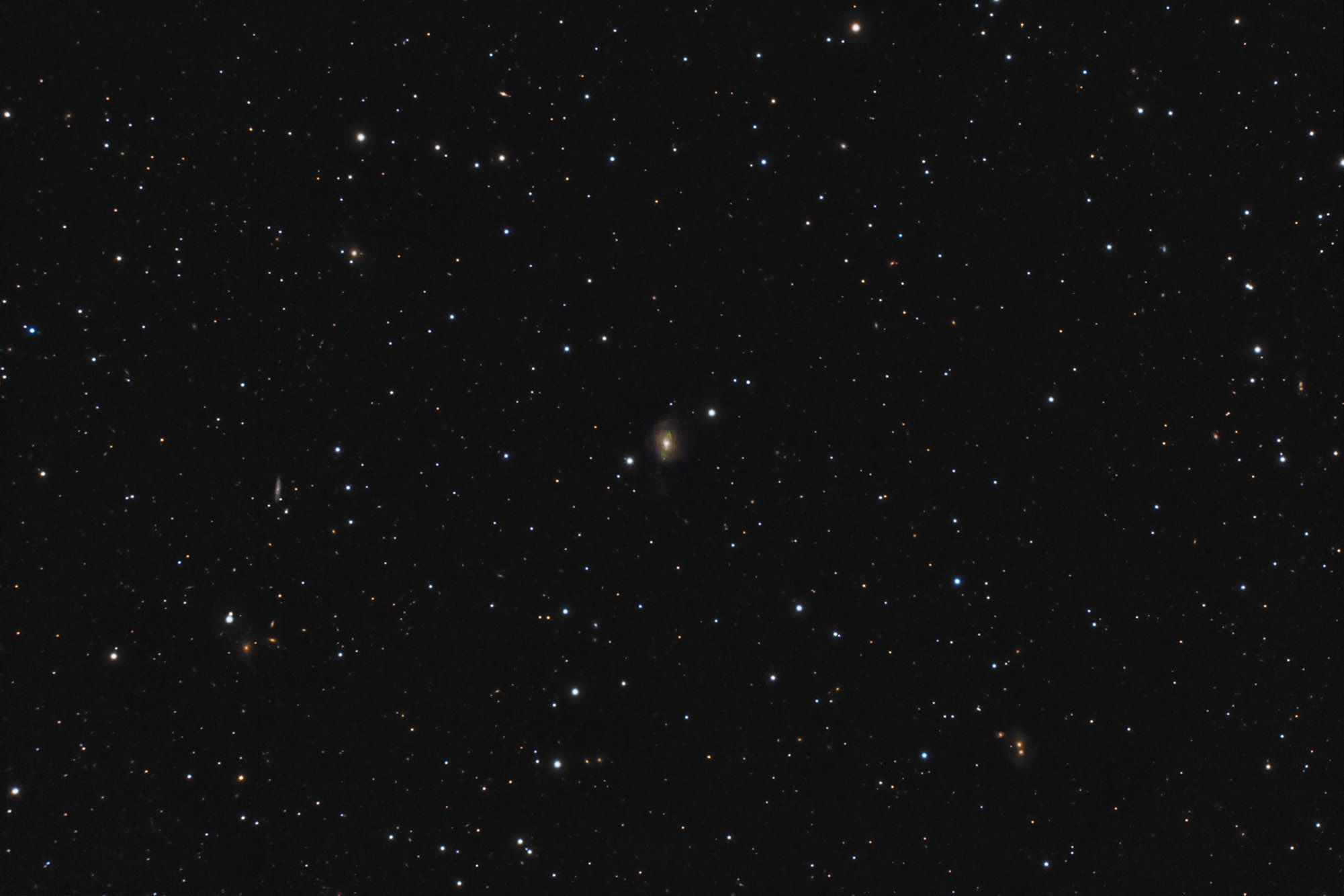 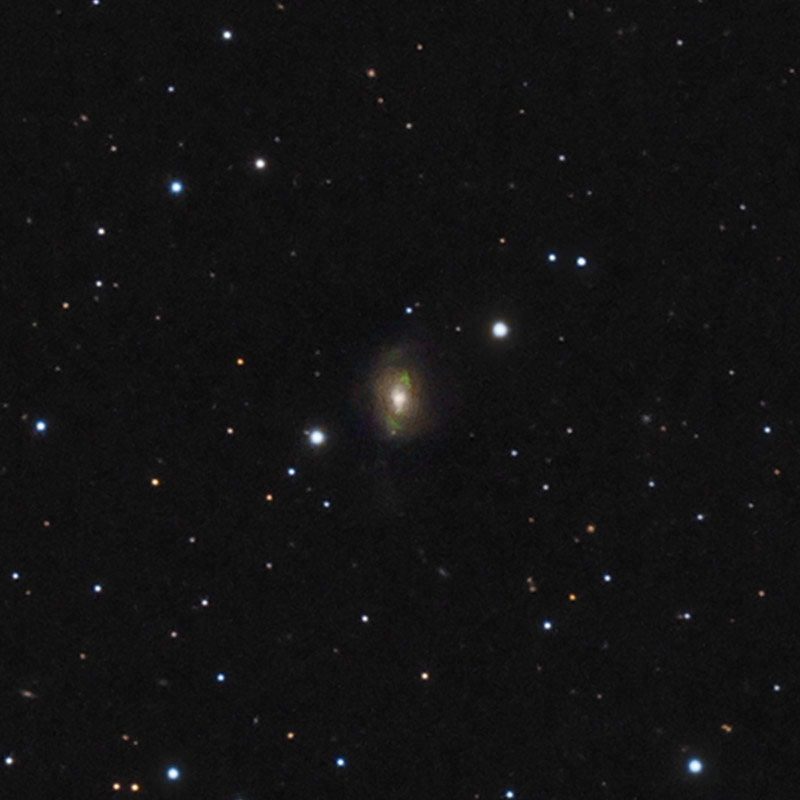 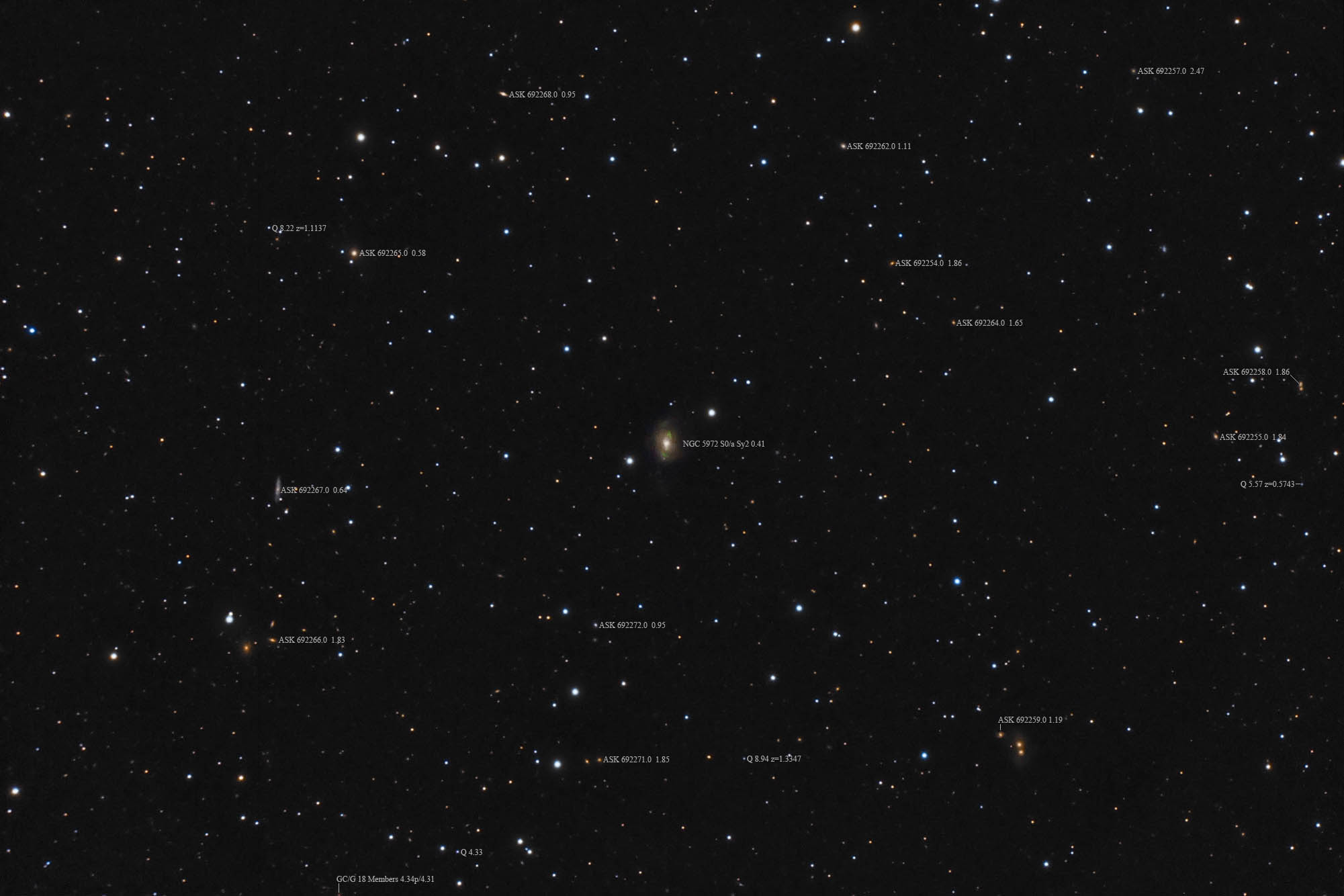