NGC 6001 is a face on spiral galaxy in Corona Borealis about 450 million light-years distant. To show this much detail at that distance it has to be a large galaxy. I measure it at a bit over 140,000 light-years across. It made my list as it fit into Arp\'s category for spirals with one heavy arm. While my nonlinear stretch sort of evens things out that arm is really much brighter than the rest of the disk. It has one other main arm that is much fainter plus a similarly bright spur that comes off the heavy arm making it appear much like a three-arm galaxy. Though the faint main arm has its own spur it is much fainter than the spur off the \"heavy\" arm. NED and the NGC Project classifies it as Sc while Seligman says Sc?

The galaxy seems to anchor its own \"local group\" of galaxies, all much smaller than it is. PGC 056051, sometimes called NGC 6002, being the nearest. If you scan the distances in the annotated image you\'ll find others at the distance scattered about the field. NGC 6001 was discovered by William Herschel on April 11, 1785. It didn\'t make either of the Herschel 400 observing programs.

This brings us to NGC 6002. Something was discovered by Lawrence Parsons on April 20, 1873. While sometimes identified as PGC 056051 that galaxy was likely too faint for even his 72\" speculum mirror. There is nothing at his position southeast of NGC 6001. He was making a consistent 1-minute error that would move his position to south of NGC 6001 where again there\'s nothing. Thus some are tempted to identify it with the PGC galaxy to the southwest. His errors just can\'t make that work and that galaxy is fainter than anything he saw with the 72\" speculum mirror. Though SIMBAD insists it is PGC 56051 many others disagree for the above reasons. What is within range and not far from his corrected position is the star I\'ve marked in the annotated image. The Sky shows it to be a double star and does identify it as NGC 6002. NED says it is a star, making no mention it is double. Looking at the Sloan image I see no sign it is double either. Nor does its PSF in my image give any indication it is double. So I assume this is yet another problem with this object. PGC 056051 is classified as Sb? by Seligman.

Transparency was better than much of May but still below what used to pass for normal. There are some interesting background galaxies that appear to be interacting but they are too faint for me to bring out, unfortunately. Maybe if I ever retake this field I can catch them. I doubt that will happen, however. This is another taken near dawn without time for a second green frame. I saved green to last expecting dawn to be a problem. Fortunately, there are rather easy ways of compensating for weak or noisy green data so I never went back for a second green. One was sufficient. 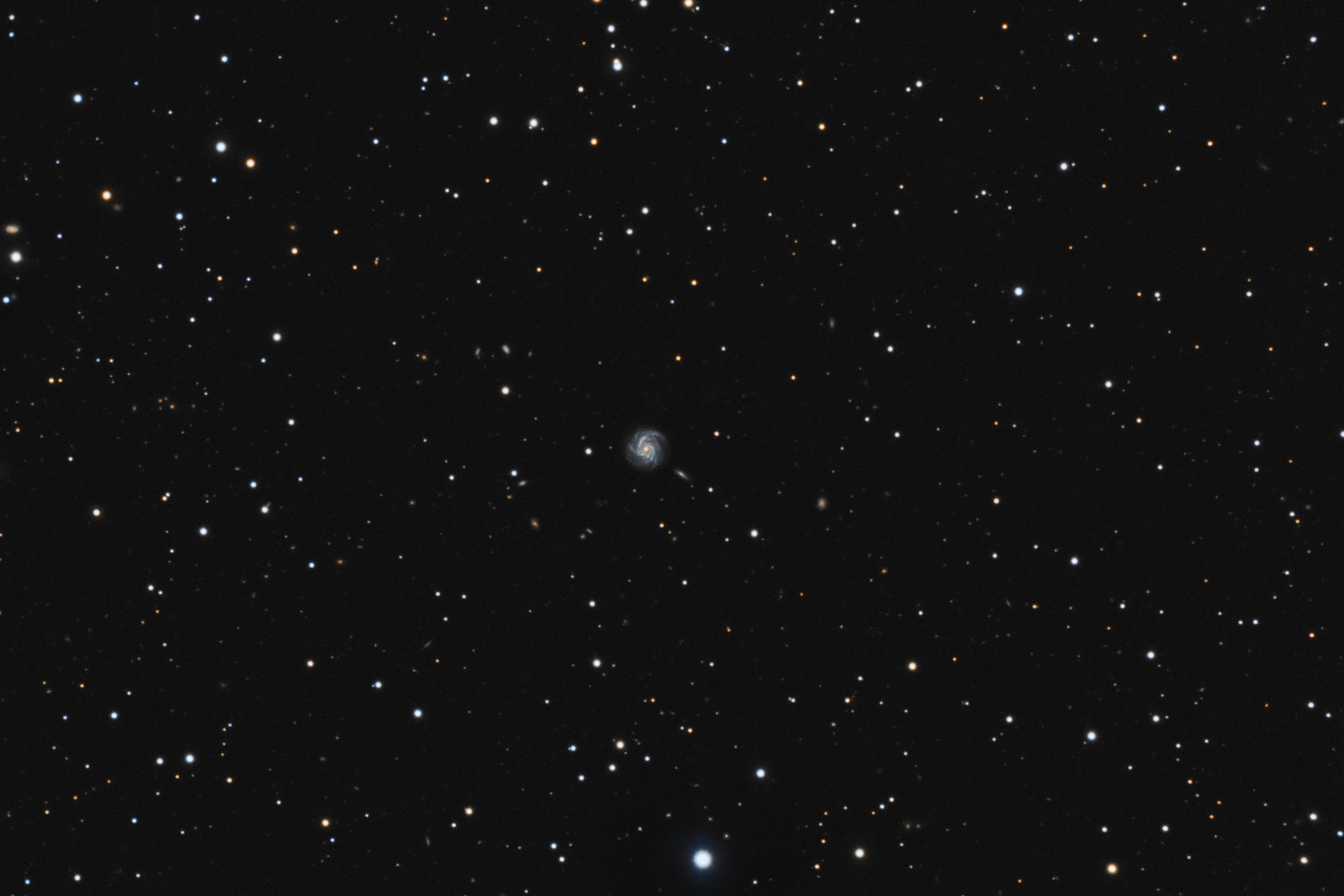 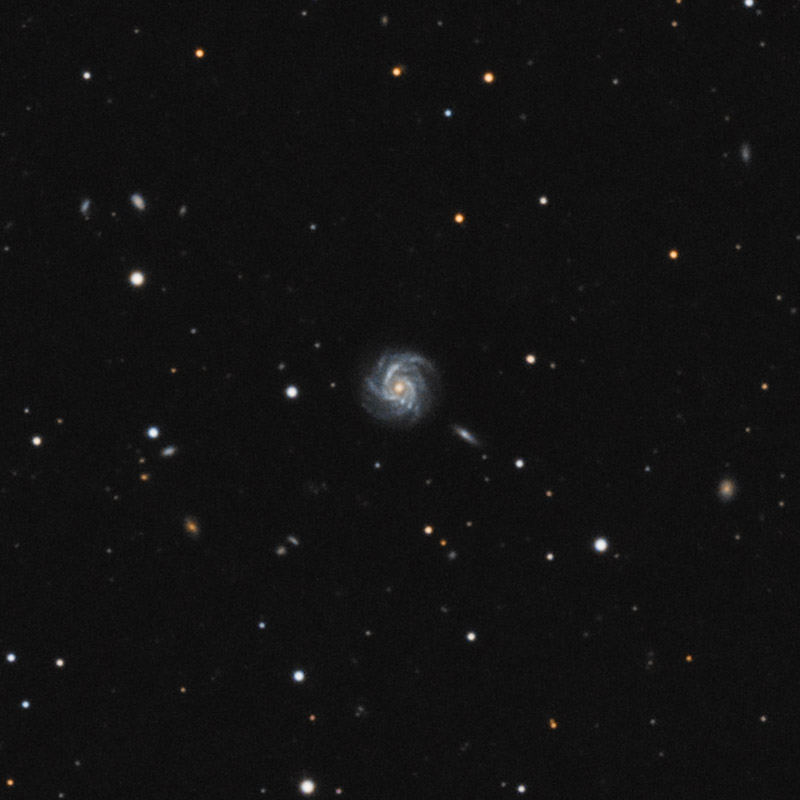 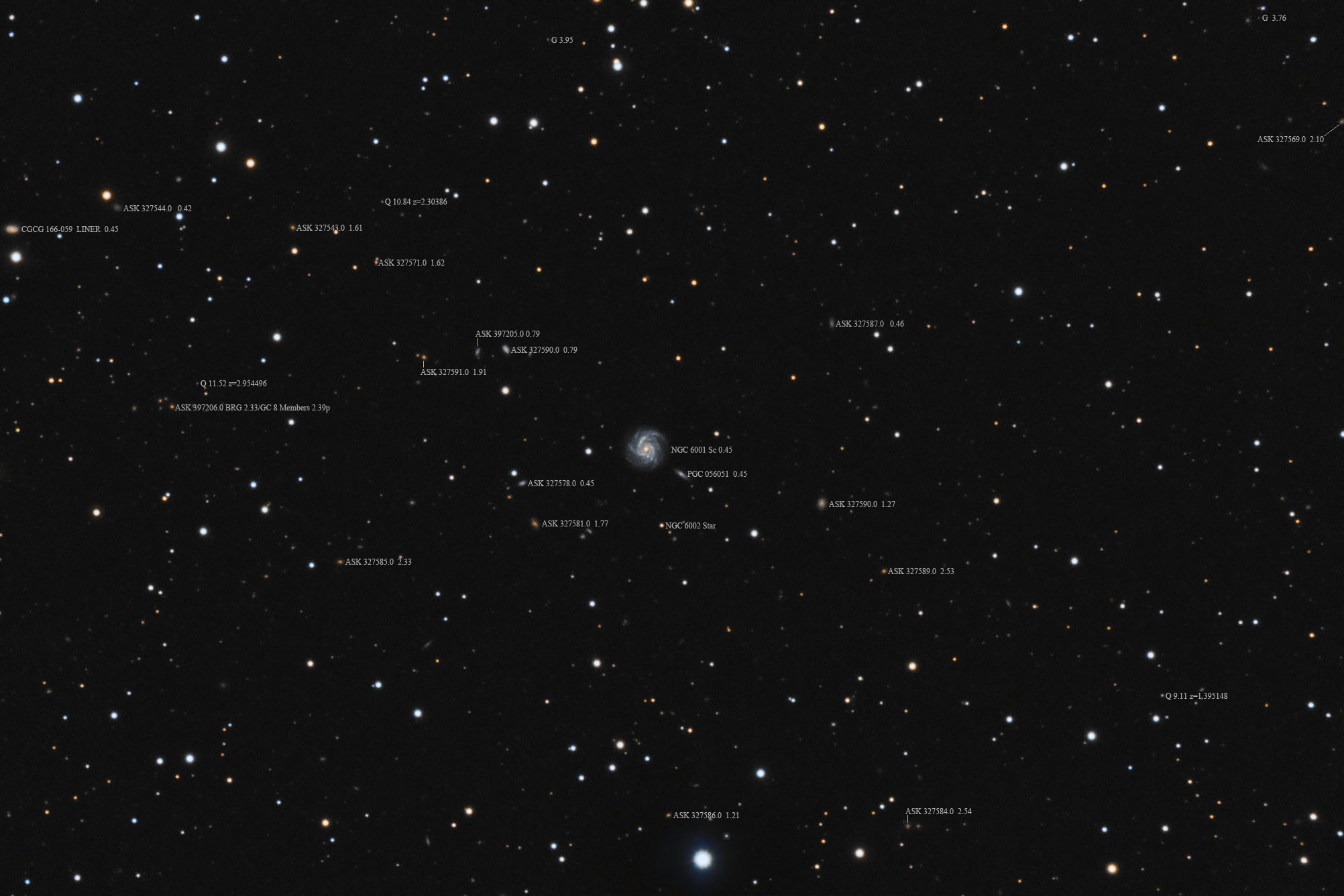