NGC 6007 is a rather strange looking spiral in Serpens Caput about 480 million light-years distant. The arm structure is quite unique, far from a classic grand design spiral. First off it is huge for a spiral at nearly 220,000 light-years in size. One main arm comes off the north side the core then makes a sudden turn around the core, goes straight for a bit then curves away getting broader and brighter as it goes. It\'s not obvious any other arm comes off the core. The only other \"major\" arm runs in a straight line above the core until it passes a field star with with another field star of similar brightness below it. The arm seems to know of these and hooks neatly around them ending just beyond the lower star. While the straight portion holds its brightness as it reaches the field star it fades away. Several other much shorter arm segments are seen including on that seems to come off the west end of this upper arm and which pretty much follows the same path, just further out though it has a curve rather than being straight. As it goes south it appears full of star knots that give it a someone kinky appearance bending first this way then that way. How did this huge galaxy get this way? I suppose it is due to interaction with other galaxies in the group, some of which it may be still digesting. There are many other galaxies at the same redshift in the field that appear as dwarfs by comparison but actually are rather large. NGC 6007 was discovered by Albert Marth on June 2, 1864, the same night as he found NGC 6006 and 6009 discussed below.

NGC 6006 is a rather strange galaxy, The NGC Project classifies it as E while Seligman classifies it as E3. NED says the rather cryptic \"pair\" which I included in the annotated image though I have no idea what this means. No one else sees two galaxies here, maybe NED doesn\'t either. I just don\'t know. If an elliptical it has plumes. Could this be due to interaction with NGC 6007 and help explain its odd arm structure. While it appears small it is actually a respectable 80,000 light-years across.

NGC 6009 is the other NGC galaxy in the field. NED doesn\'t attempt to classify it while The NGC Project and Seligman say simply S without further classification. Its upper arm does pull away from the disk slightly but otherwise, it is a rather basic spiral. I thought I saw hints of a bar but that may just be noise in my image. It is slightly larger of the little NGC galaxies at about 90,000 light-years in size, nearly as big as our galaxy. For some reason, a single Tully-Fisher distance estimate has it at nearly 160% the redshift distance. That would make it huge which seems unlikely so I\'m going with the redshift distance.

Near the top of the image left of center is ASK 635335.0, another member of the group. NED shows the slightly blue object in the disk as a distant quasar seen through the disk of the galaxy. Since it is a spectroscopic redshift measurement that puts it over 10 billion light-years distant I\'ll have to say it is most likely the case but it sure looks like a blue star cloud in the galaxy to me. How bright is it to shine through the dust and gas of the galaxy?

To the east of it is PGC 056336 an SB(s)b? pec starburst galaxy with two wide arms. NED shows the bright parts of the north and south arms as separate galaxies, not as part of the galaxy as they seem to be. I didn\'t label them as the redshifts were virtually the same as for PGC 056336.

Below PGC 056336 near the bottom is another very wide two armed spiral. It appears to have a bright object on the end of a drawn-out east arm. Unfortunately, I\'d had a camera problem before starting this image and had to dismount the camera then remount it. In doing so I failed to get it on square and didn\'t notice so this side of the frame is out of focus. Looking at the Sloan image of this object it is very blue and highly distorted as it whatever it was has been disrupted. Thus it may be the cause of the arm\'s length and drawn out shape. I\'ll need to retake this one with the camera square this time. 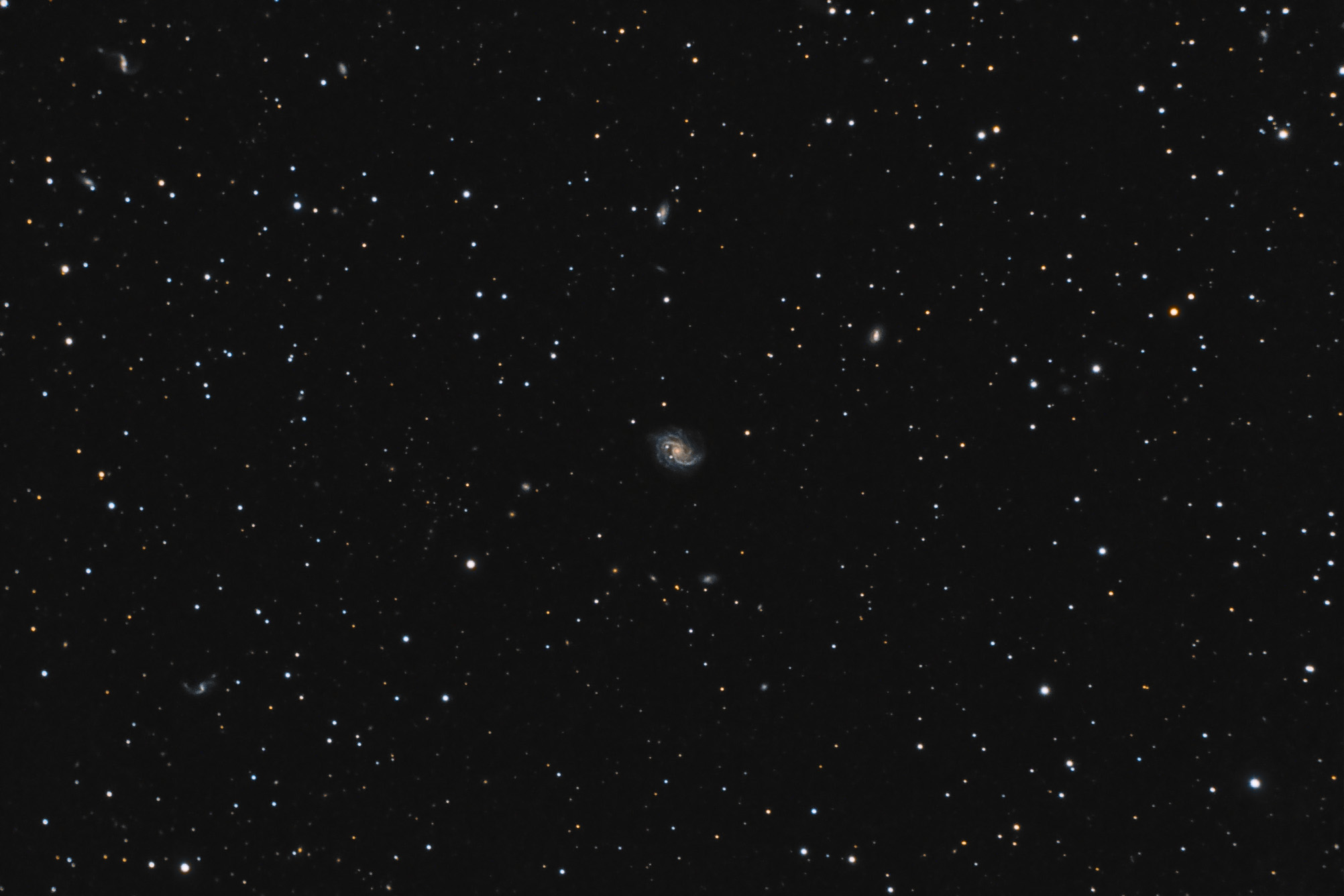 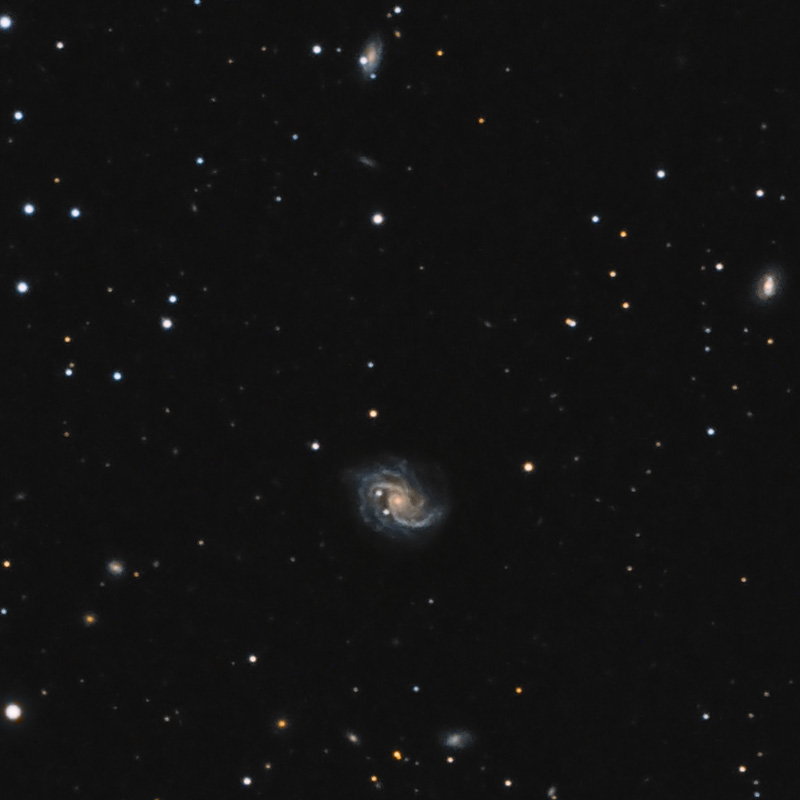 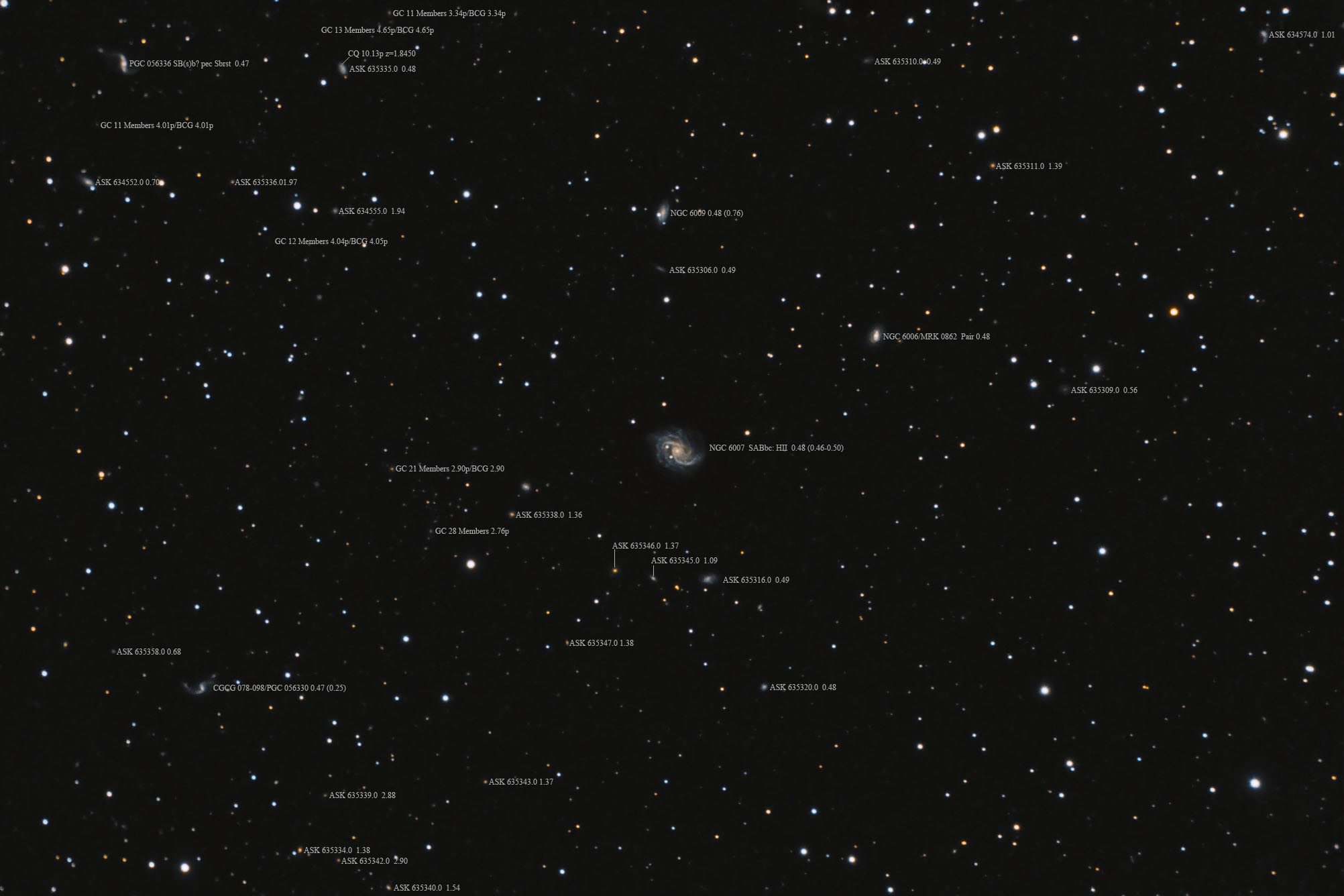