I\'ve heard of a cometary nebula, and have some on my to-do list in fact, but I\'ve never heard of the term \"cometary galaxy\". If there is such a thing it is in this image. There is a very distant galaxy found by the HST that is now called the \"Comet Galaxy\" (http://www.spacetelescope.org/images/heic0705a/ in the upper left corner) but it is a far poorer \"comet\" than the one in this image. More on it in a bit. First some on the rest of the image.

NGC 6015 is a multi-armed, warped spiral galaxy in Draco, south of the bowl of the Little Dipper. Its distance is hard to pin down. Too close for redshift to be reliable other methods need be used. Tully-Fisher measurements range from about 50 million light-years to 66 million light-years though most cluster toward the lower estimate, say 55 million light-years. Oddly the highest and lowest measurements have the smallest error bar yet neither include the other. They are just too far apart. It was discovered by William Herschel on June 2, 1788. It is in the second Herschel 400 program.

Papers on this galaxy are also somewhat in disagreement, one finding a strong ring structure and another saying they couldn\'t find one. Though that one looked at CO radio frequencies while the one finding a ring used a wider range of frequencies. That paper goes into a lot of detail on this galaxy. It\'s abstract is at http://adsabs.harvard.edu/abs/1997A%26A...321..754V with a link to the free full article. The galaxy has no obvious central bulge.

To the east of NGC 6015 is a very odd galaxy. It looks just like a comet! Since it shows up on the POSS plates dating back to the 1950\'s it is one slow comet! I would love to tell you about it. NED says it doesn\'t exist! It shows nothing at the position. NED does show the reddish spherical galaxy above it as the IR source 2MASXi J1552150+621928/SDSS J155215.07+621927.8. Between the IR galaxy and the comet-like one, NED shows a 23rd magnitude point source galaxy which on the Sloan plate shows up as a bright green hot pixel but they show nothing for the position of the comet-like galaxy. Did they fall for it being a comet? I can\'t fathom any other reason for leaving it out. The Sky 6 shows it as PGC 2634580 and 17.8 magnitude. In case it was a nebula in our galaxy I checked SIMBAD but it too has nothing at that location either. I found a 2007 post on a Yahoo forum saying SIMBAD did give it the same PGC designation as The Sky 6, however, I couldn\'t get SIMBAD to do so today. Maybe I don\'t hold my tongue right.

While this field is covered by the Sloan survey and NED shows at least 3000 galaxies in the field only NGC 6015 has any redshift data. Since I went with a non-redshift distance estimate I put it in parentheses. The image is full of interesting galaxy groups and clusters. Some of these did have redshift data. I was half done with the annotated image when I realized I wasn\'t picking up any galaxies. So I finished it, skimpy as it is. 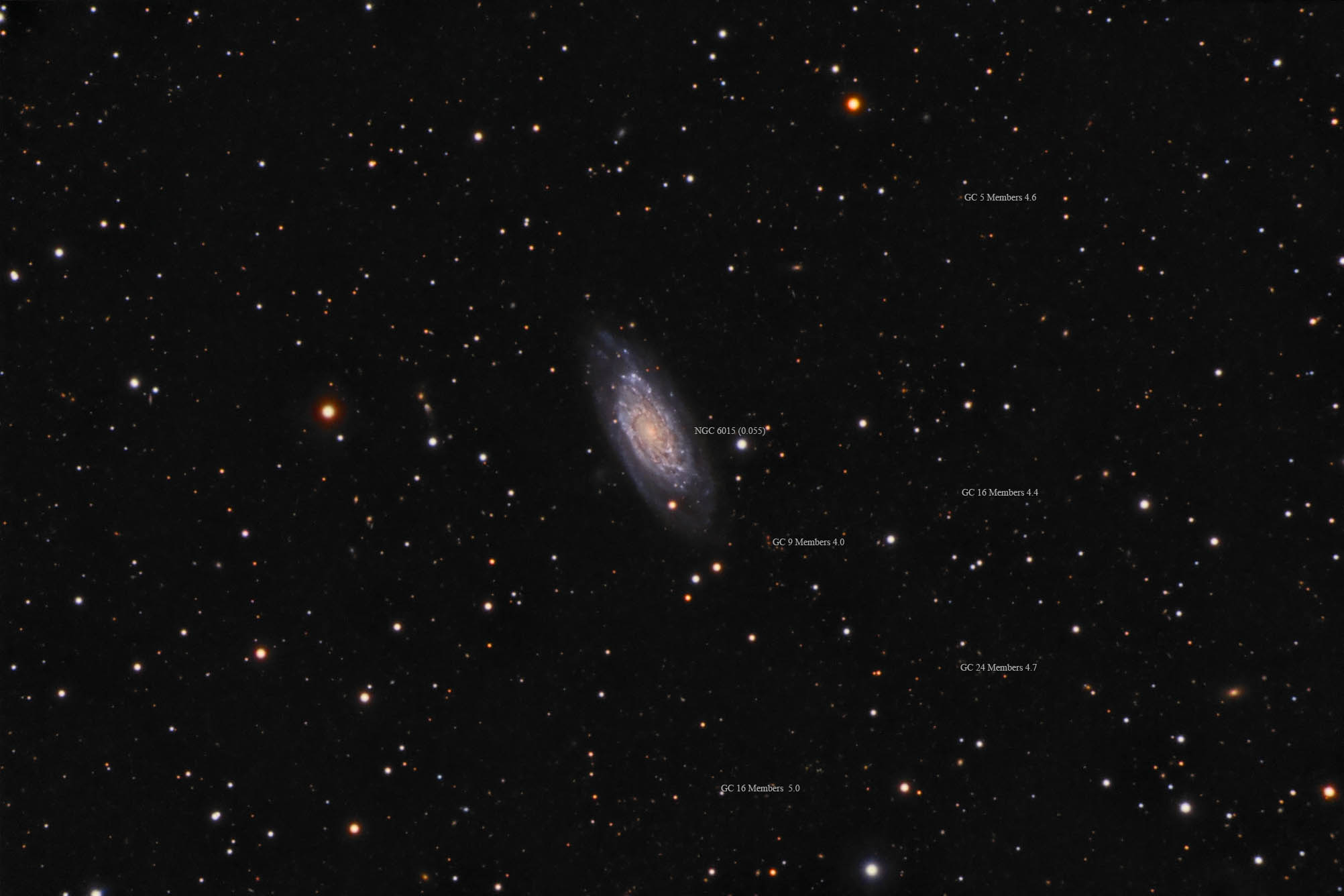 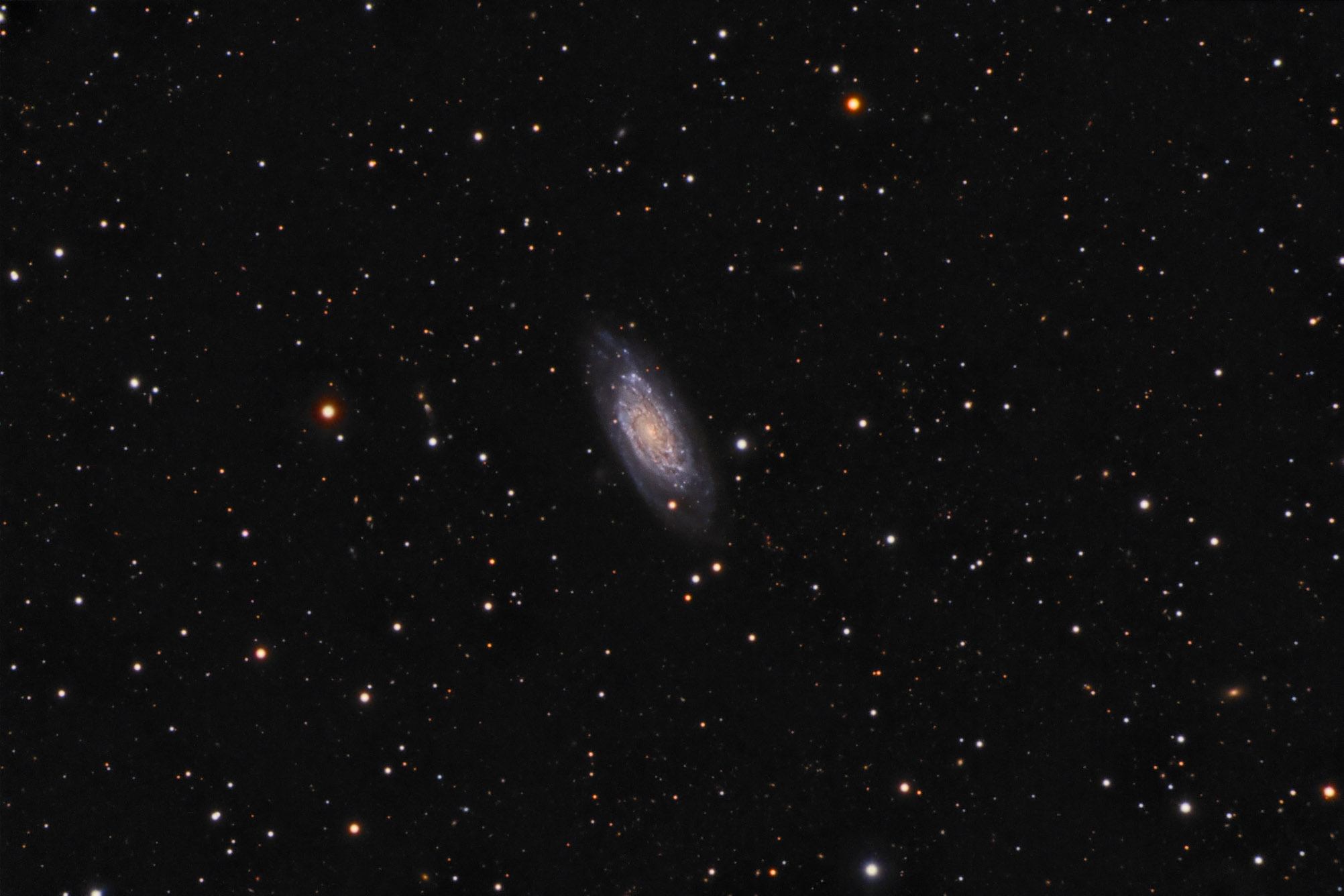 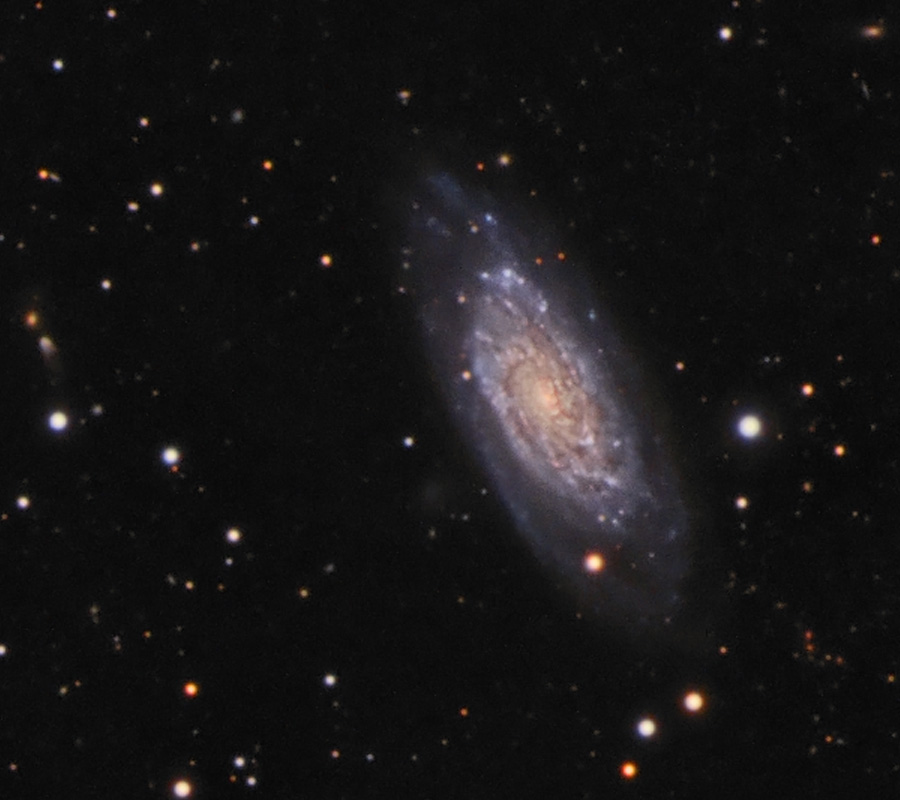 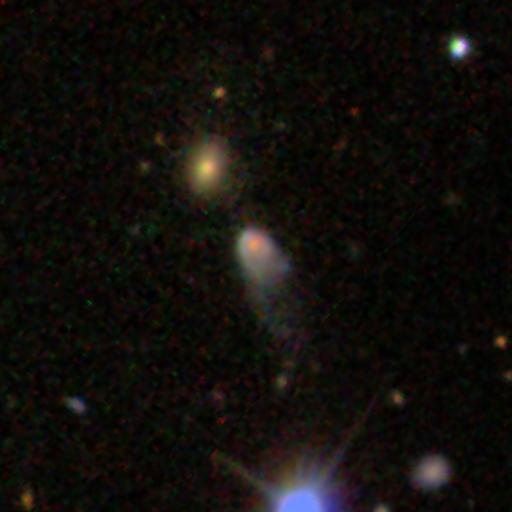