Mrk 496/NGC 6090 is a pair of merging galaxies, a bit over 400 million light-years distant in Draco. They remind me of the Antenna galaxies, Arp 244 but for some reason, these didn\'t make it into his atlas and they did. The northern galaxy is quite red while the southern is blue. Both are listed at NED as being Sd pec starburst galaxies. Nearby is CGCG 275-028 an E0 galaxy with plumes. Did it also interact with Mrk 496 or one of its galaxies or is the plume due to some other unfortunate galaxy it consumed in the recent past? While there\'s information on Mrk 496 I found little on this companion. The third major galaxy in this field is UGC 10261. The three comprise the WBL 610 galaxy group though UGC 10261 is not at all related to the other two galaxies. In fact, it seems to be the major galaxy in its own galaxy cluster SDSS-C4 3095 which NED lists as having 24 members. I find some 23 galaxies at its approximate distance of 840 million light-years in the frame. NED gives no angular size for the cluster. It appears to cover much of the right half of my image. It is a huge galaxy that I measure at over 300,000 light-years in size. It dwarfs Mrk 496 which I measure at only 51,000 light-years for the two galaxies themselves. Adding in the plumes they are much larger at a bit under 300,000 light-years so again UGC 10261 without plumes still beats it. CGCG 275-028 including plumes is only 100,000 light-years in size. Ignoring the plumes it is only 37,000 light-years in size. NGC 6090 was discovered by Lewis Swift on June 24, 1887.

The field contains one flat galaxy, FGC 2000 and below it a blue star-like object listed as SHOC 528, a blue compact galaxy. The SHOC is the Sloan HII galaxies with Oxygen abundance Catalog. Why it isn\'t the SHGOAC I don\'t know. Can\'t be pronounced \"Shock\" I suppose is the main reason. There are a half-dozen or so quasar candidates (UvES) in the image but only 1 NED considers proven.

I had thought the first two blue frames had been hit by clouds. They were fine but since they were considered lost to clouds the system retook them so I ended up with 4 good blue frames. That improves the signal to noise ratio of the blue data over the green and red but doesn\'t skew the color balance, so I used all 4.

For Hubble\'s \"somewhat\" better version (east at the top rather than north) of this galaxy see: http://hubblesite.org/newscenter/archive/releases/2008/16/image/bx/ This was taken on one of my best nights of the year so finally I\'m going deep, something conditions have prevented for many months now. Due to this, I was able to pick up many of the rather faint galaxies in the HST image. HST shows detail in them while they are just blobs for me but at least many are there. 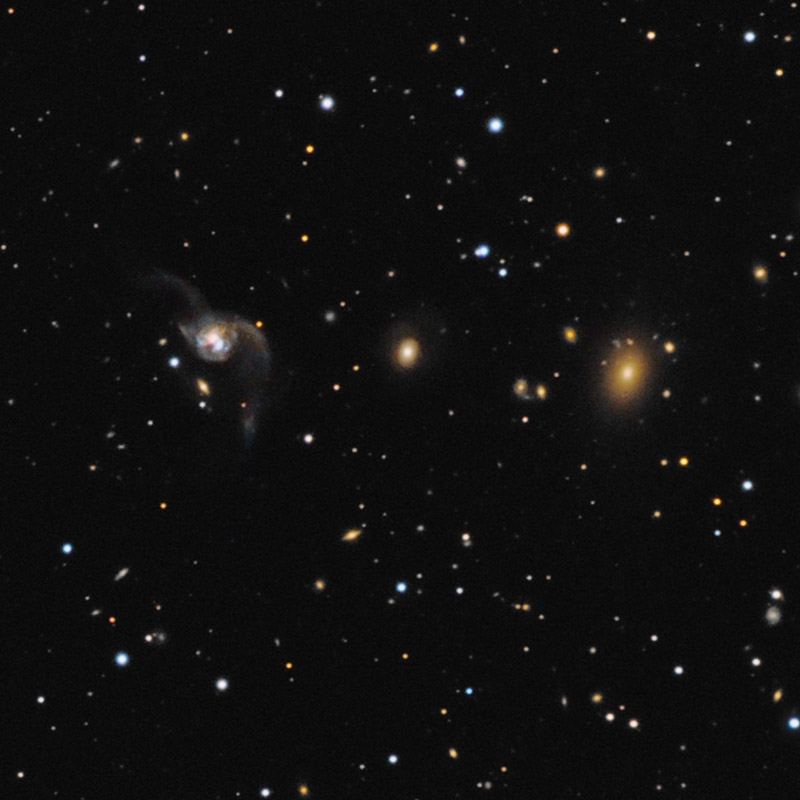 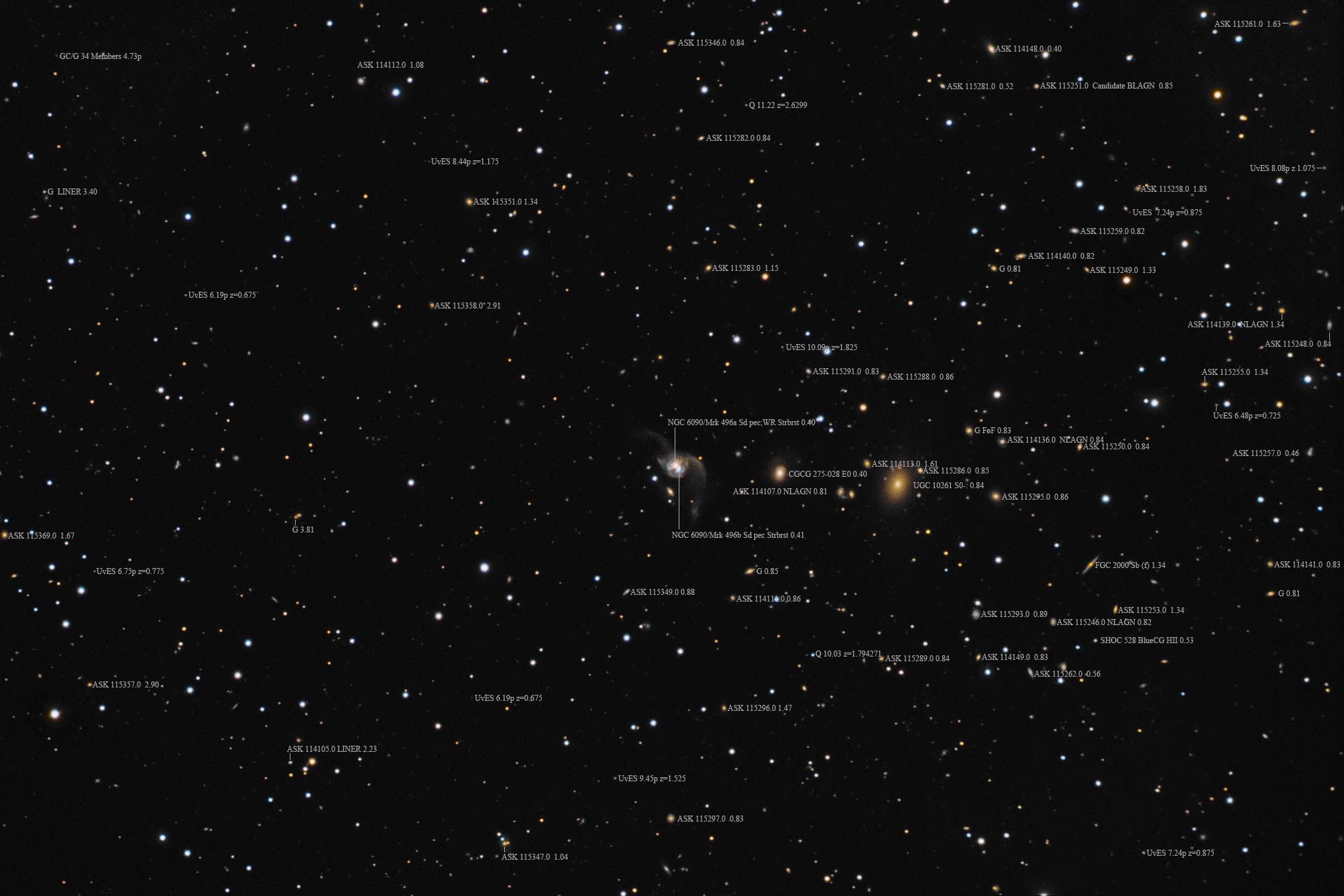 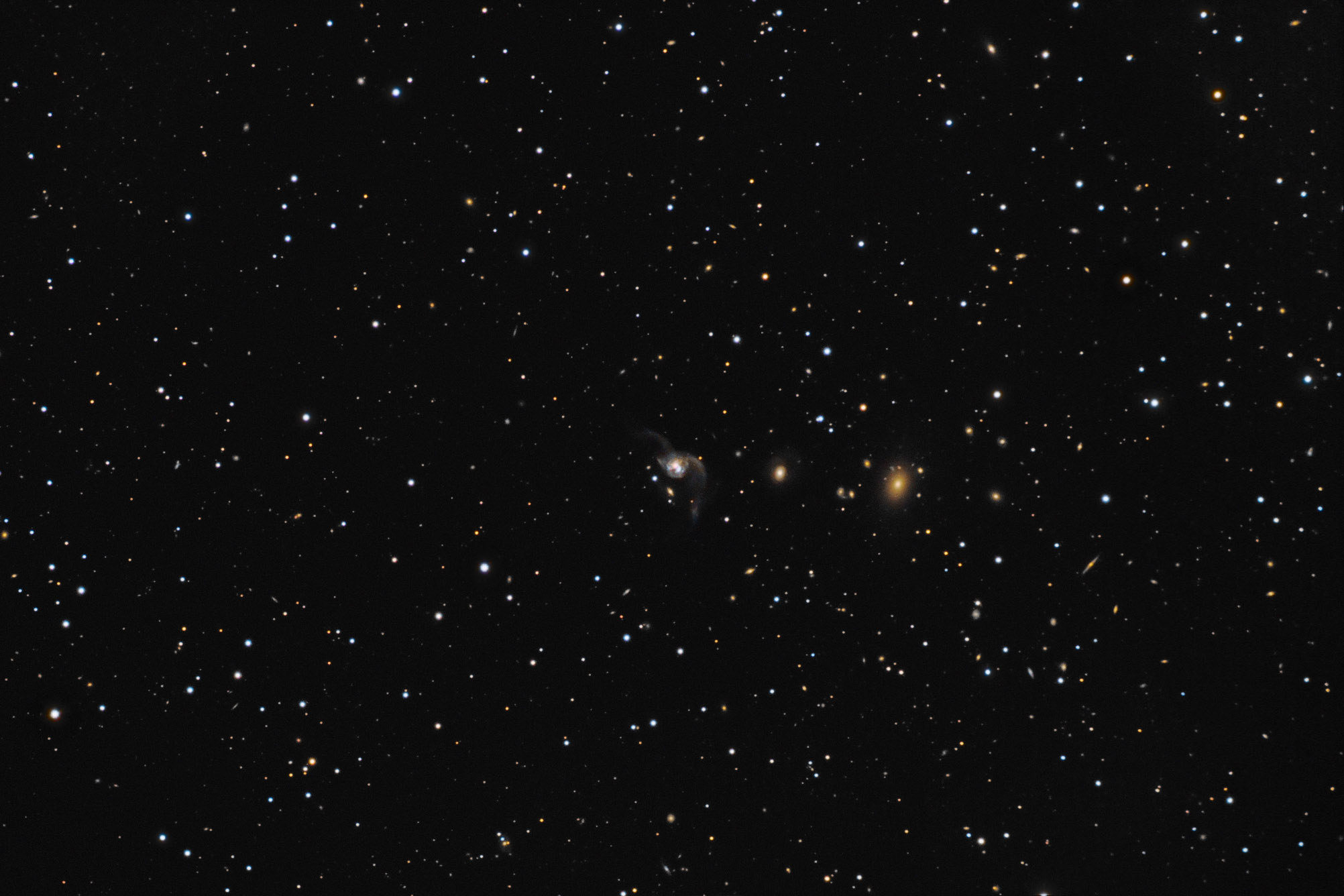