NGC 6100 is a ring galaxy in eastern Serpens Caput just about on the celestial equator that is about 230 million light-years from our galaxy and 110,000 light-years across. It was discovered by Lewis Swift on July 3, 1886. He\'s likely more famous to amateur astronomers for his shared discovery of comet Swift-Tuttle that\'s responsible for the Perseid Meteor Shower each August. NGC 6100 has both an outer blue ring and an inner pseudo-ring. The area between these came out quite red in my image which surprised me. Oddly the Sloan image shows it more a muddy brown color. I\'m not sure why the difference though Sloan picks up 4 bands beyond our visual range that often skews its color. A likely background galaxy is seen through the outer ring to the northeast (upper left). NED shows nothing at its position, another surprise. It\'s clearly a reddish galaxy that didn\'t make it into any catalog NED carries.

I was hoping to find something on this galaxy but I can\'t find any paper having ever discussed it other than to list it in a catalog. A second ring galaxy appears in my image to the far left edge nearly halfway between the center line and top of the image. It is listed simply as G 0.075 in the annotated image as it is only found in the IR source 2MASS catalog that uses only its coordinates for identification. It has a bright core surrounded by a very faint outer ring. Again the area between the two appears somewhat red in color.

Most galaxies in the field suffered the same fate as this one. That is, they are listed only in catalogs that use coordinates for identification, mostly 2MASS and/or Sloan catalogs. Those, as mentioned, are just labeled as G or Q for quasar. Some rather bright galaxies have no label as they too were only identified by coordinates but had no redshift or other distance data available at NED.

Seeing wasn\'t all that great the night this was taken. It started cloudy so I hadn\'t opened the roof to cool the scopes when it suddenly cleared. I took the 4 luminance frames right after opening and thanks to the scope not having come to temperature there were tube currents that made for wonky stars. That cleared up just as I started the color frames. Being faint I took twice my usual color data though one green was lost when a boater hit the observatory with a multi-million candle power spotlight looking for his marker buoy. The next night I took 4 more luminance frames planning on using those to replace the first series taken with the tube currents. But that night was of even poorer transparency and while the stars were good that series didn\'t go as faint. So I ended up processing both then combining them in lighten mode. That filled in the wonky stars to some extent without losing the fainter objects. Stars are still far from perfect but a lot better and the signal to noise ratio of the image somewhat improved as well. 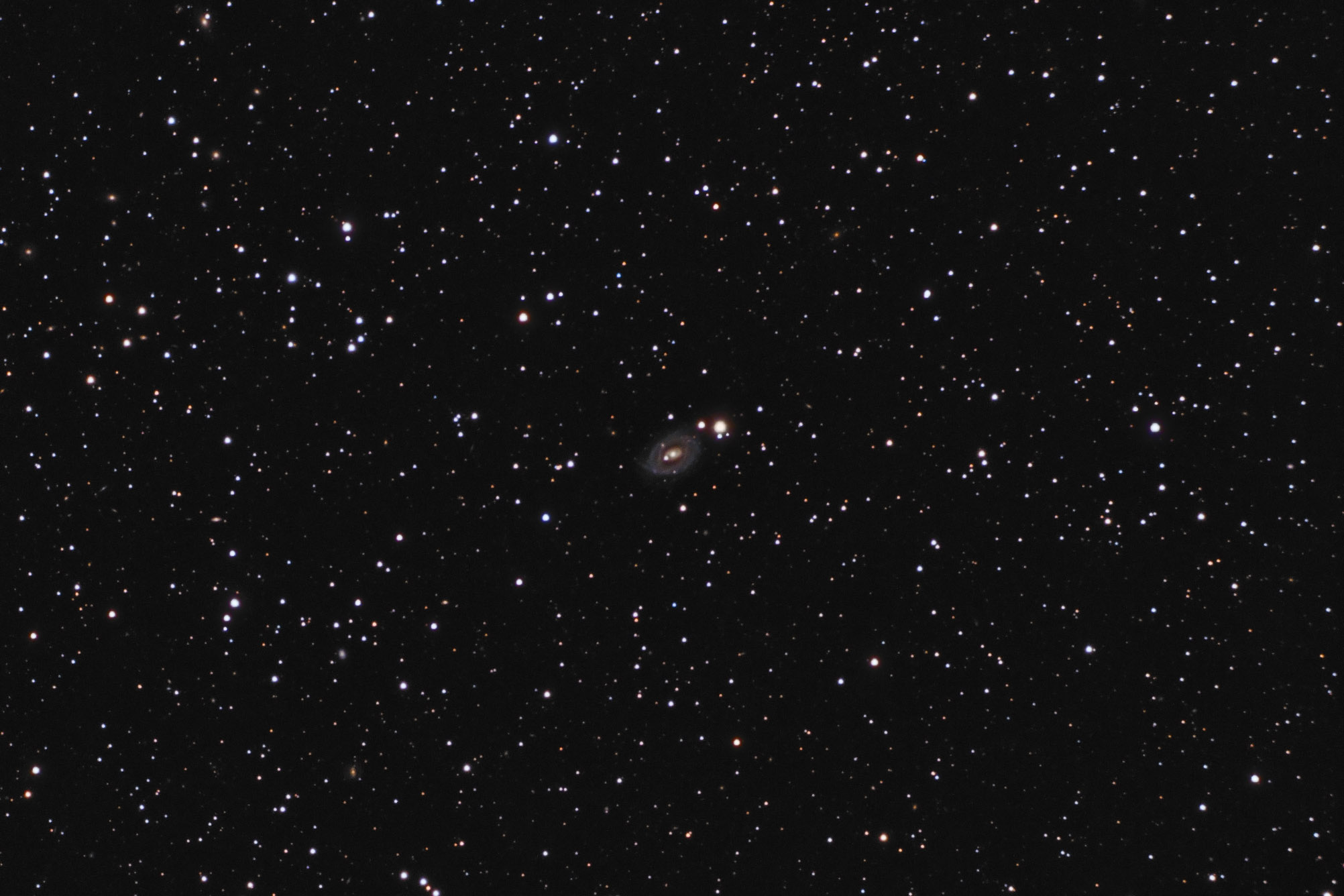 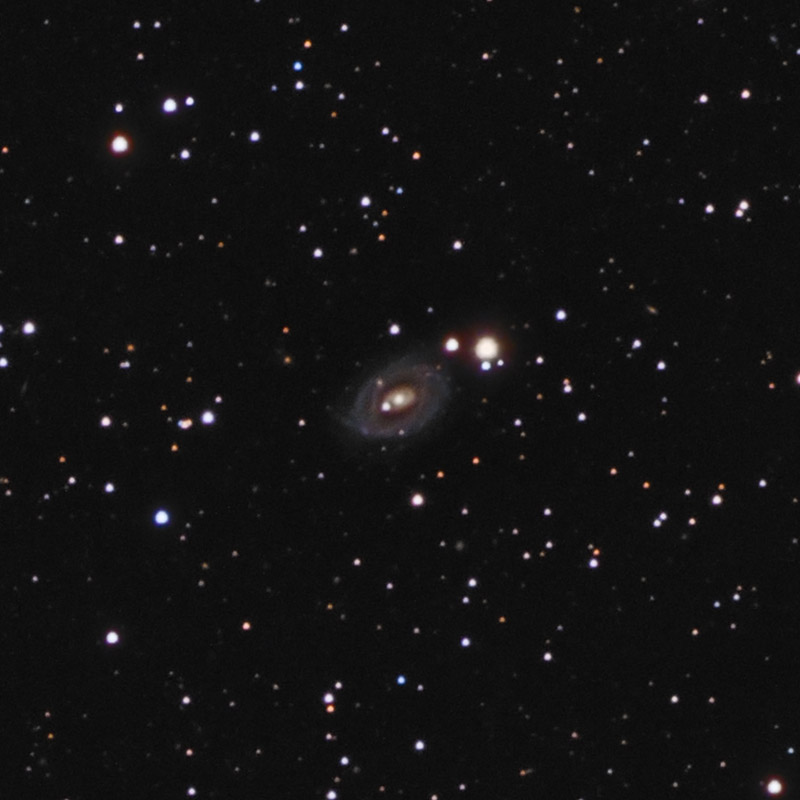 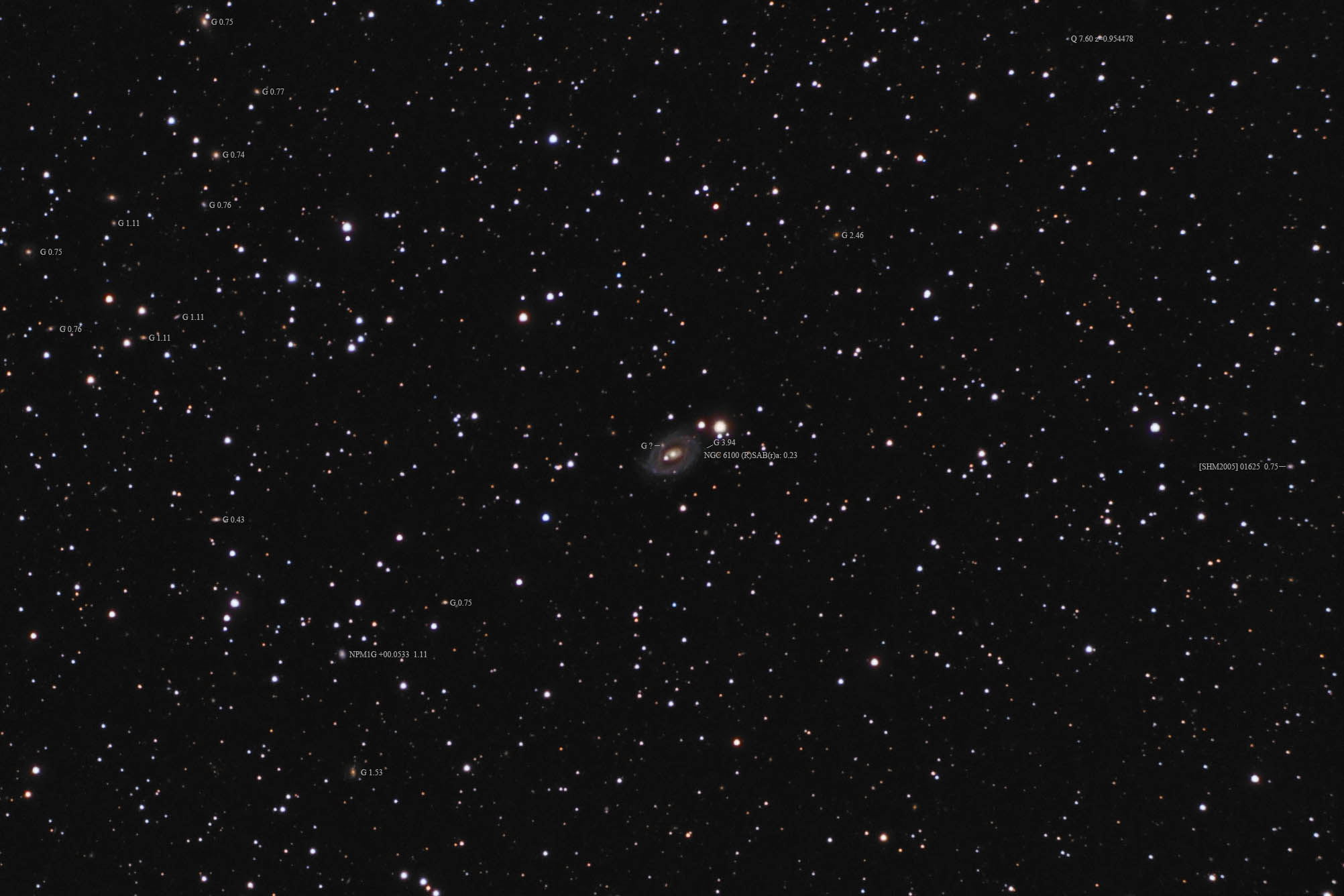