I found this rather busy field quite interesting as it has 3 NGC galaxies and a very flat galaxy as well as some other rather strange galaxies. I was going to center on NGC 6120 but when I did a test shot for how to frame it for the to-do list the field was so interesting I had to move the center position to where i could pick up as many of the interesting galaxies as possible. The field is located in northeastern Corona Borealis not far from the famous Hercules Galaxy Cluster.

NGC 6120, my initial object, is a peculiar spiral that could have made Arp\'s Atlas in any of several categories. It has a heavy arm as well as a tidal arm. Arp put tidal arms into many different categories for some reason. Besides the heavy blue arm, its other arm is oddly red and very different looking. On it is an odd elongated blue object NED identifies as SDSS J161947.71+374627.6. With no redshift, it is hard to tell if it is related to NGC 6120 or not. It might be the remaining core of something it is digesting or a super bright star-forming region or a separate galaxy (NED lists it as a galaxy) that is or isn\'t related to NGC 6120. I found nothing to help decide this issue. The tidal arm is composed of several overlapping star clouds of various sizes so quite different from most tidal features. It points to NGC 6119 which has its own odd pulled out or tidal arm which doesn\'t point back to NGC 6120. Otherwise, it is a rather normal looking spiral. Have these two interacted in the past? I\'d expect more distortion in 6119 if they had but that doesn\'t mean they didn\'t interact. Both have similar redshifts that put them 420 million light-years distant. Ignoring its tidal plumes NGC 6120 is about 77,000 light-years across though nearly 130,000 light-years across including the plumes that go to the south as well as the north. NGC 6119 is about 100,000 light-years across including its pulled out arm. NGC 6120 was discovered by William Herschel on March 17, 1787 but is not in either Herschel observing program. NGC 6119 was discovered by John Herschel 40 years later on April 27, 1827. I found nothing on its odd pulled out arm.

The third NGC galaxy is NGC 6122. It is seen edge-on and appears to be a \"red and dead\" spiral though that may just be due to seeing it on edge. That assumes it is an Sb galaxy as NED classifies it. Other sources sometimes classify it as S0. Since I see a faint dust lane I don\'t agree with the S0 classification. Its redshift puts it slightly more distant at 460 million light-years. This, however, may be just due to random motion within the group and it is really part of the NGC 6120 group. There are other mostly smaller galaxies in the 400 to 460 million light-year range in the image suggesting this might be a rather large group though I found no group listed at NED. NGC 6122 was discovered by Guillaume Bigourdan on May 6, 1886. It seems odd to me that John Herschel missed it as it has a higher surface brightness than NGC 6119.

My other galaxy of interest is FGC 2024 well to the south. It is a very thin edge-on galaxy that certainly has earned is position in the Flat Galaxy Catalog. It is strange in a couple of respects. First, the disk is highly warped to the southwest and seems to have a kink in its northeastern arm right where another galaxy SPRC 266 hides it from view. Its other oddity is the core. Look closely and you see it is tilted somewhat more to the north-south than the disk, even more tilt than the bent end of the southwestern arm. Does SPRC 226 have something to do with some or all of these odd features? I have no idea. SPRC is the Sloan Polar Ring Catalog. However, I don\'t see how this applies to this little galaxy. Both have similar redshift that puts them 910 million light-year distant. That distance makes FGC 2024 a very large galaxy some 325,000 light-years across. That\'s huge for any galaxy, especially an Scd spiral.

Another large galaxy likely part of the same group as FGC 2024 is ASK 306395.0 which is an E0 galaxy of some 250,000 light-years in diameter. I find the E0 classification rather odd as it appears quite elongated in my data. Part of that may be due to a small galaxy seen on its northeastern side. Another large spiral is seen near the lower left edge of my image, ASK 306272.0. It is rather unusual for me to resolve spiral structure in a galaxy some 2.27 billion light-years distant. It\'s nearly 200,000 light-year size makes this possible.

There are several galaxy clusters listed. The largest is centered at the very bottom of my image a bit right of center. It is listed as being medium compact with 80 members across a 25 minute diameter field. That should extend more than halfway up into my image but I see only two other galaxies at its 1.9 billion light-year distance in the image. I don\'t know where the others are hiding. Maybe the rather numerous ones at about 1.76 to 1.78 billion light-years are members.

For a field of such distant galaxies, it turns out to be quite interesting, at least to me. Due to my poor conditions here I was able to only get one frame for each color but it seems to have worked out. While there was a piece of space junk in the red frame it didn\'t go through anything so was rather easy to clone out. Thus I didn\'t try for more color data. 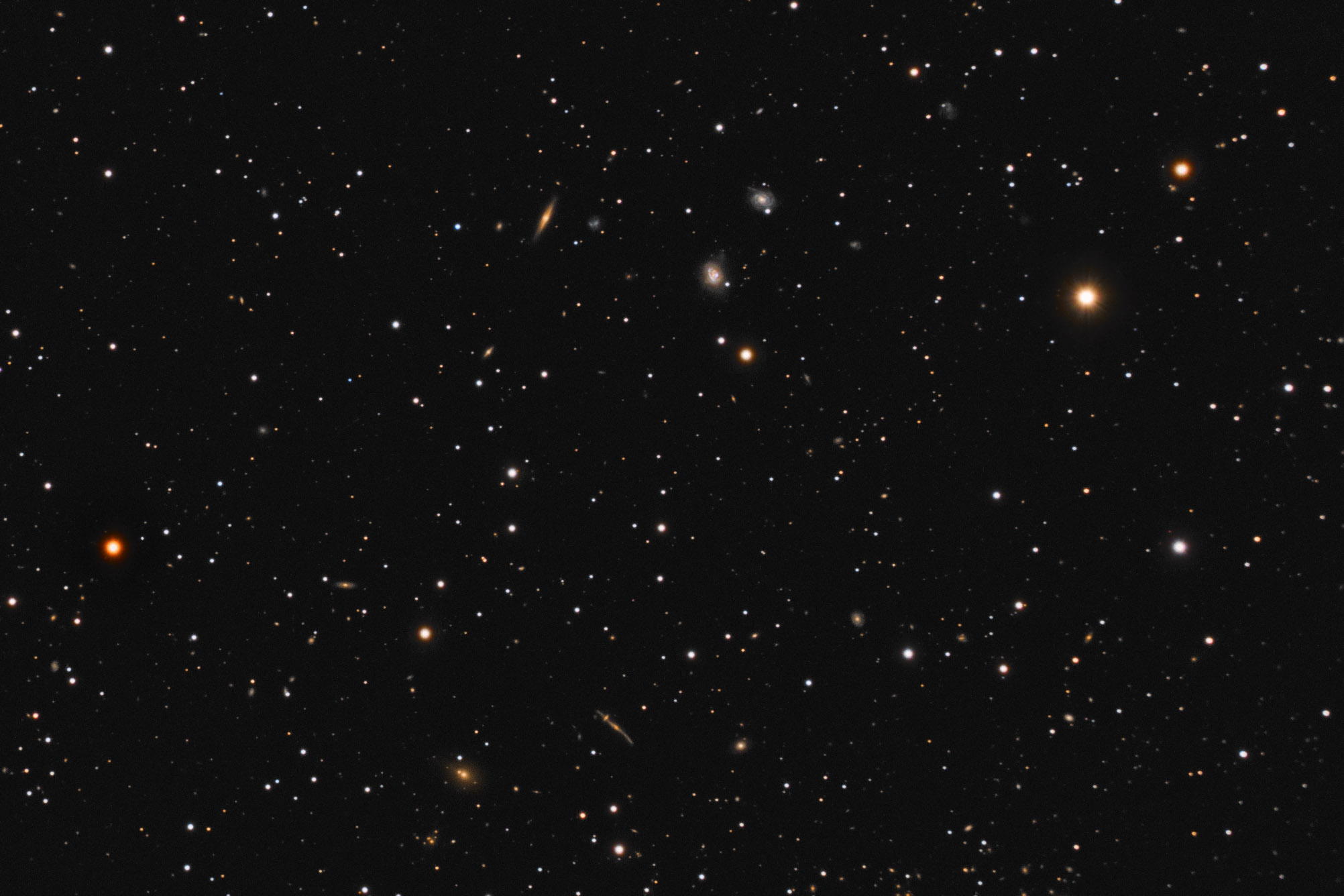 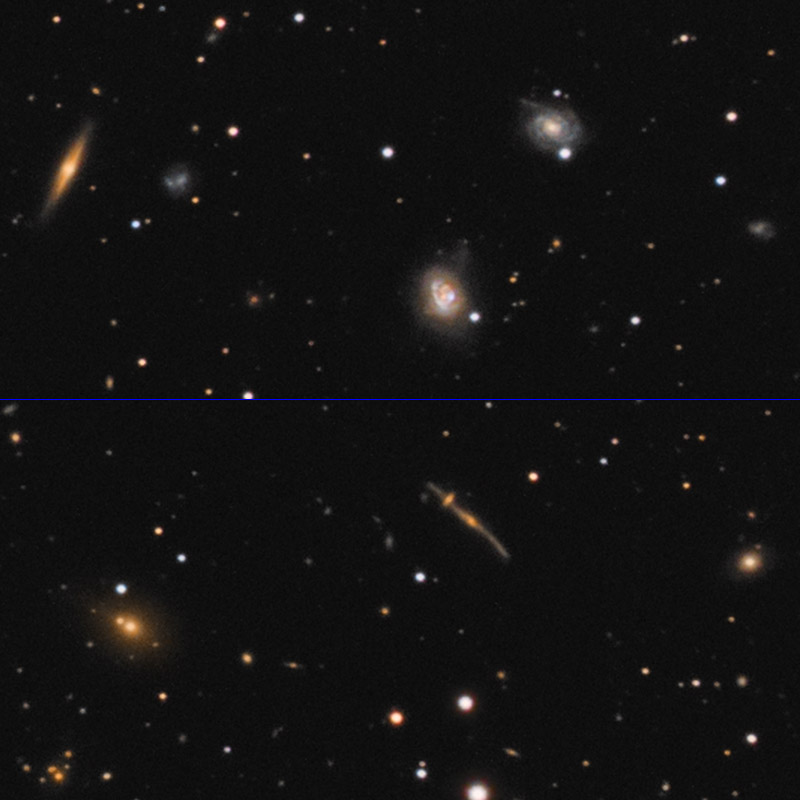 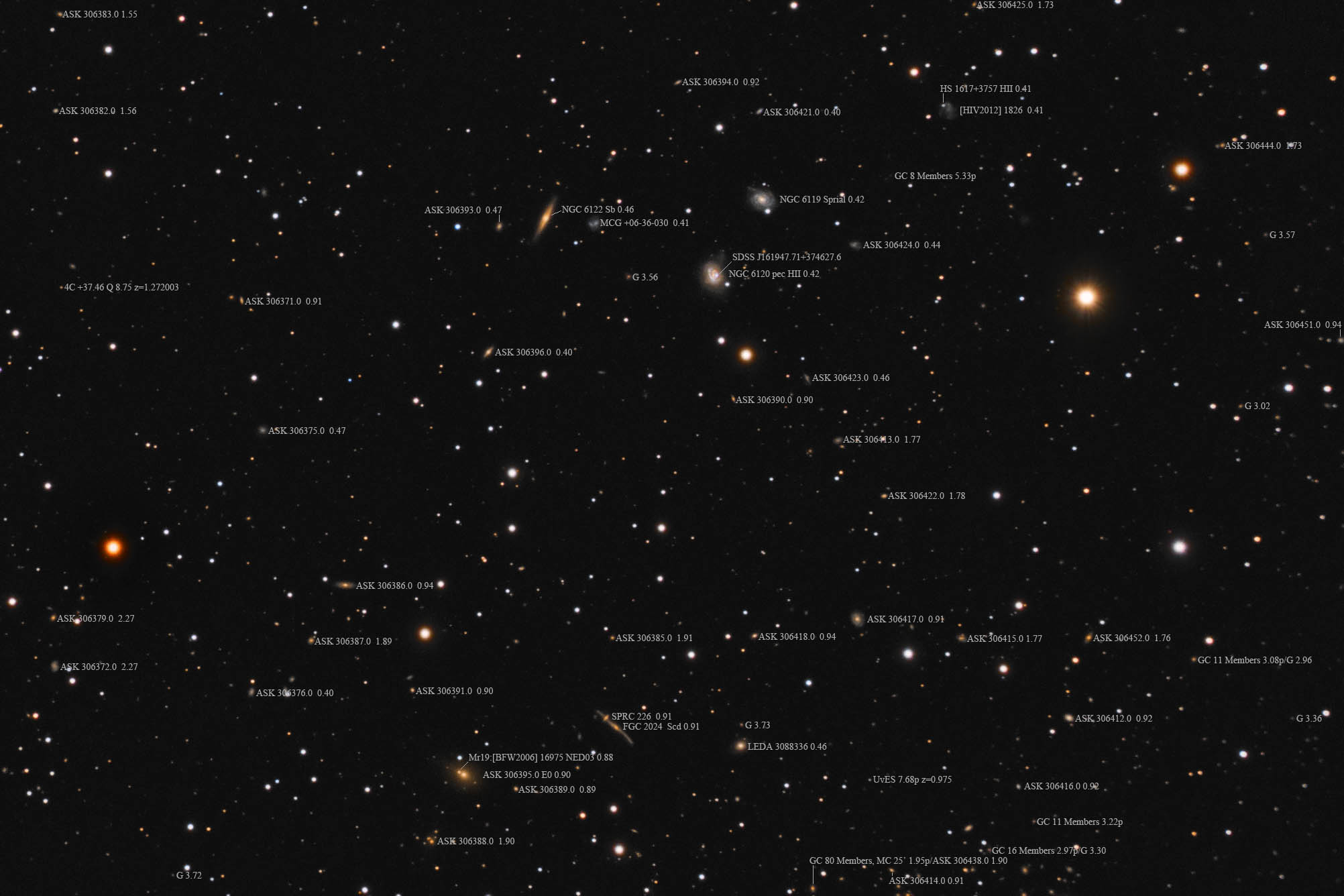