NGC 6155 is a barred spiral galaxy in Hercules classified as SBcd. NED\'s redshift measurement puts it about 110 million light-years distant but non-redshift measurements say it is only 83 million light-years away. The bar is barely visible in my cropped image at 0.8\" per pixel running from the southeast to the northwest. Apparently, it stands out better in near IR bands.

What drew my attention to this one is that it appears sloshed. That is the nucleus is well off center. It is well centered in the blue spiral arms of the galaxy but both are well east of the outer rather featureless reddish halo. Apparently, the halo is poor in new stars, though the highly fragmented arms are quite blue indicating good star formation is going on there. It almost looks like a small spiral superimposed over a low surface brightness elliptical.

The galaxy was discovered by William Herschel on May 12, 1787 and is in the Herschel II program. He got the position a bit wrong. This was noted and corrected by Guillaume Bigourdan but the date or even the year is lost to history, at least I couldn\'t find it.

The field is devoid of companions for NGC 6155 but its appearance leads me to think it must have interacted, maybe devoured another galaxy at some time in its past.

Another galaxy that attracted my interest once I saw it in my processed image is ASK 115977.0 at a bit over 1 billion light-years. It is obviously a barred spiral with two faint, widely spaced arms coming off the ends of the bar. Most of the galaxies in the image are over one billion light-years distant though a bunch are also seen at about 760 million light-years. No asteroid came to the party, however.

When I went to process this one three months after it was taken, I discovered, somehow, I\'d not taken any blue frames nor did I note this. I considered it done. With it fast fading into bad seeing low in the northwest and my trees over there I either had to wait until next year to get the data or take it with a bright, nearly full moon. I chose the latter. My background was 10x higher than normal so I used 4 frames to try and get a usable signal to noise ratio to balance the red and green frames. Actually, I took 8 but somehow I used the wrong coordinates at first and the galaxy was half out of the frame. So I had to retake them using the correct coordinates. By then the moon was higher and the galaxy lower so blue data is not what I wanted but rather than wait until next year I went with it anyway. 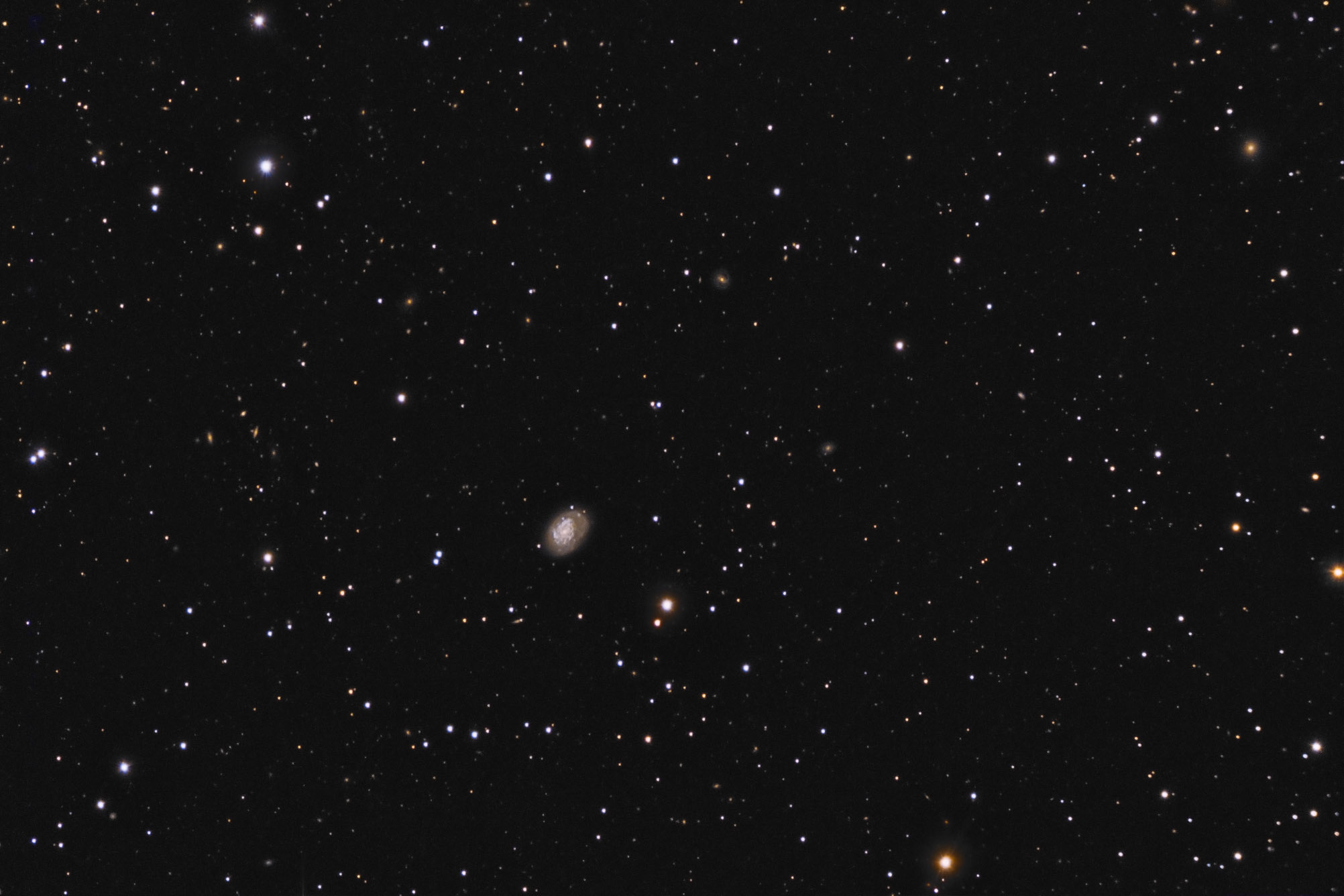 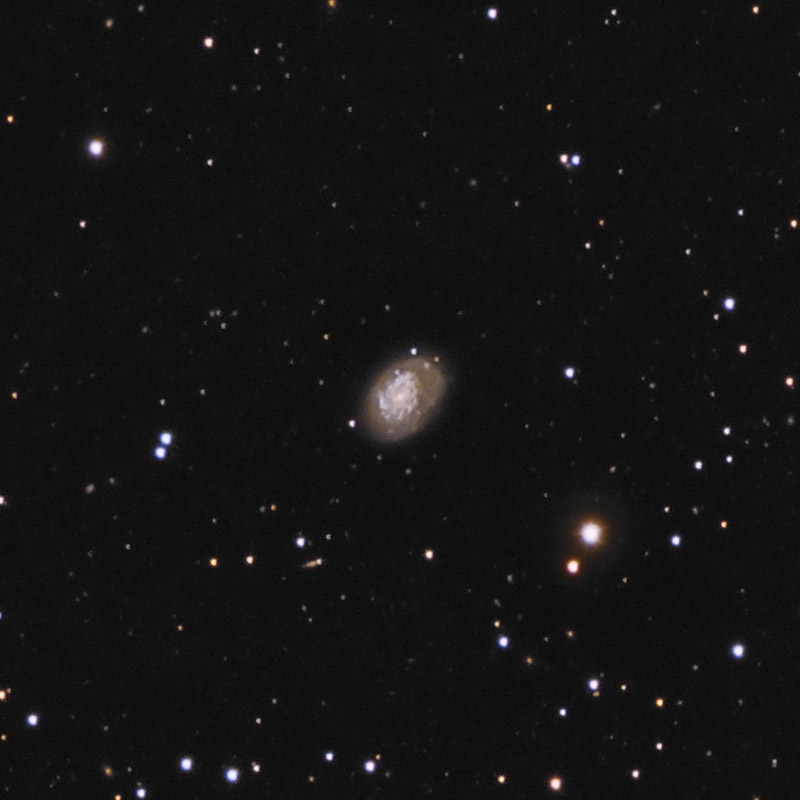 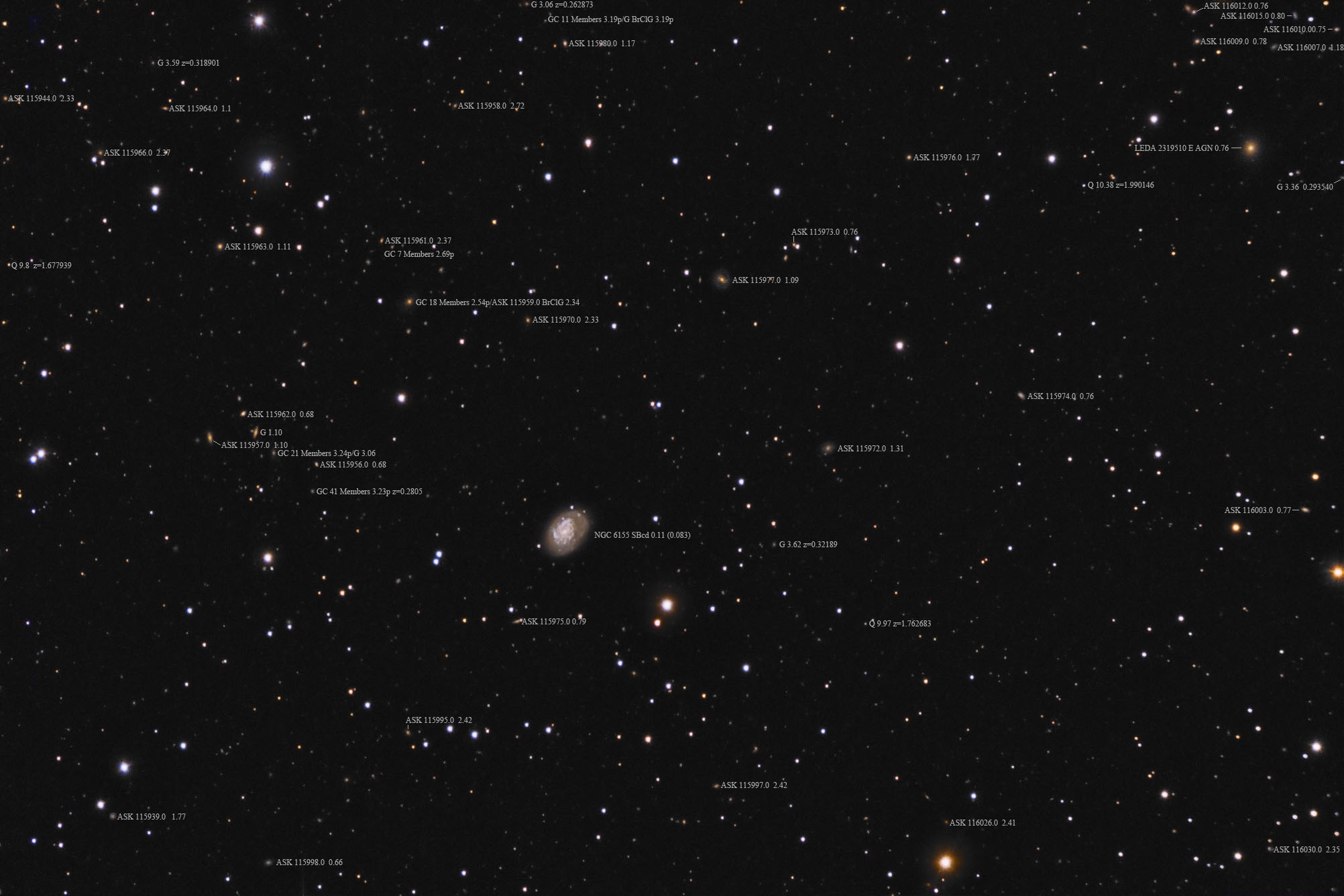