NGC 6166 anchors the galaxy cluster Abell 2199 in western Hercules at about 410 million light-years. So why did it make my Arp-like list? If you dig into its core you find there are four objects in there. Or are they foreground objects or background ones seen right through the galaxy? Adding to the confusion, three of the four have redshift data which vary rather greatly. While NGC 6166 is listed with a redshift of about 413 million light years, component A has a redshift that puts it 422 million light-years distant, B 369 million and C 446 million. Seems hard to believe objects around the center of the galaxy could have such a wide variation in velocity. How was the 413 figure determined, an average? That is 408 if the pure mean is used. There is a 4th component D is not listed in NED though it is listed at the NGC Project. My image seems to show a 5th member south of B/D and north of C. I think I see it in the Sloan image as well. Likely is just a foreground star. Adding to the confusion, there are 4 galaxies carrying the NGC 6166 name labeled A through D that are unrelated to the core features A through D. These galaxies are identified by name in the annotated image.

I normally list cluster members by catalog number in the annotated image but this one is so dense even listing just by redshift distance is difficult. Those few with NGC or other commonly used numbers are shown. There\'s an interesting blue object NW of NGC 6166 at a redshift determined distance of 5.3 billion light years. It\'s very unusual to see a blue object at this distance that isn\'t a quasar. This one is reported as an Ultraviolet Excess object by the Galex Uv orbiting observatory and as a galaxy by the Sloan Survey. Usually UvES objects are quasars but in this case, it appears it really is a very active blue galaxy that is amazingly bright. Compare it to the small cluster galaxy above it that is rather red. Hard to tell the blue one is 11 times further away.

Unlike most fields, nearly every obvious galaxy had a listed redshift. There were only a few exceptions. They were listed in NED, unlike the totally missing ones I often find, just had no redshift data. I left those blank. So when you see one with no redshift it isn\'t that I missed it, there was none to list. Since it didn\'t happen all that often this annotation is by far the most complex I\'ve done. It took more than the hour or so most take. I hope this is the all time record. I\'m not looking forward to another! All the labels made the compressed size of the image twice as large as normal.

NED says NGC 6166 is 1.9 minutes along its long dimension. This means it is about 225 million light-years in diameter. That\'s one huge galaxy. It is classed as a cD elliptical. Nearly everything around it is puny by comparison. While it is far larger than our Milky Way galaxy the others in the group is mostly smaller than our galaxy. The exception is UGC 10420 at a diameter of 150 million light-years. It is a barred spiral classed as SB(r)b. 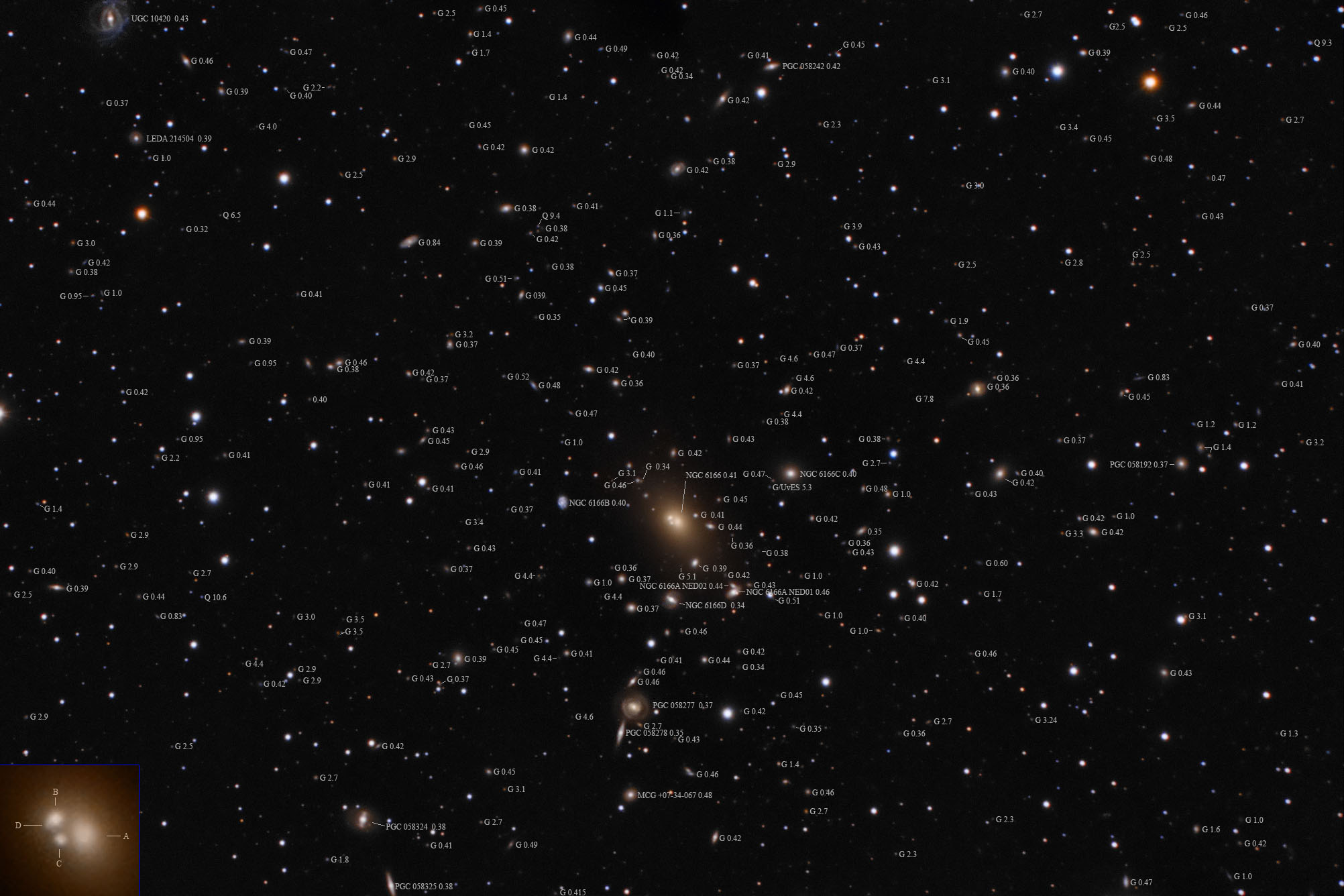 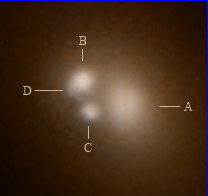 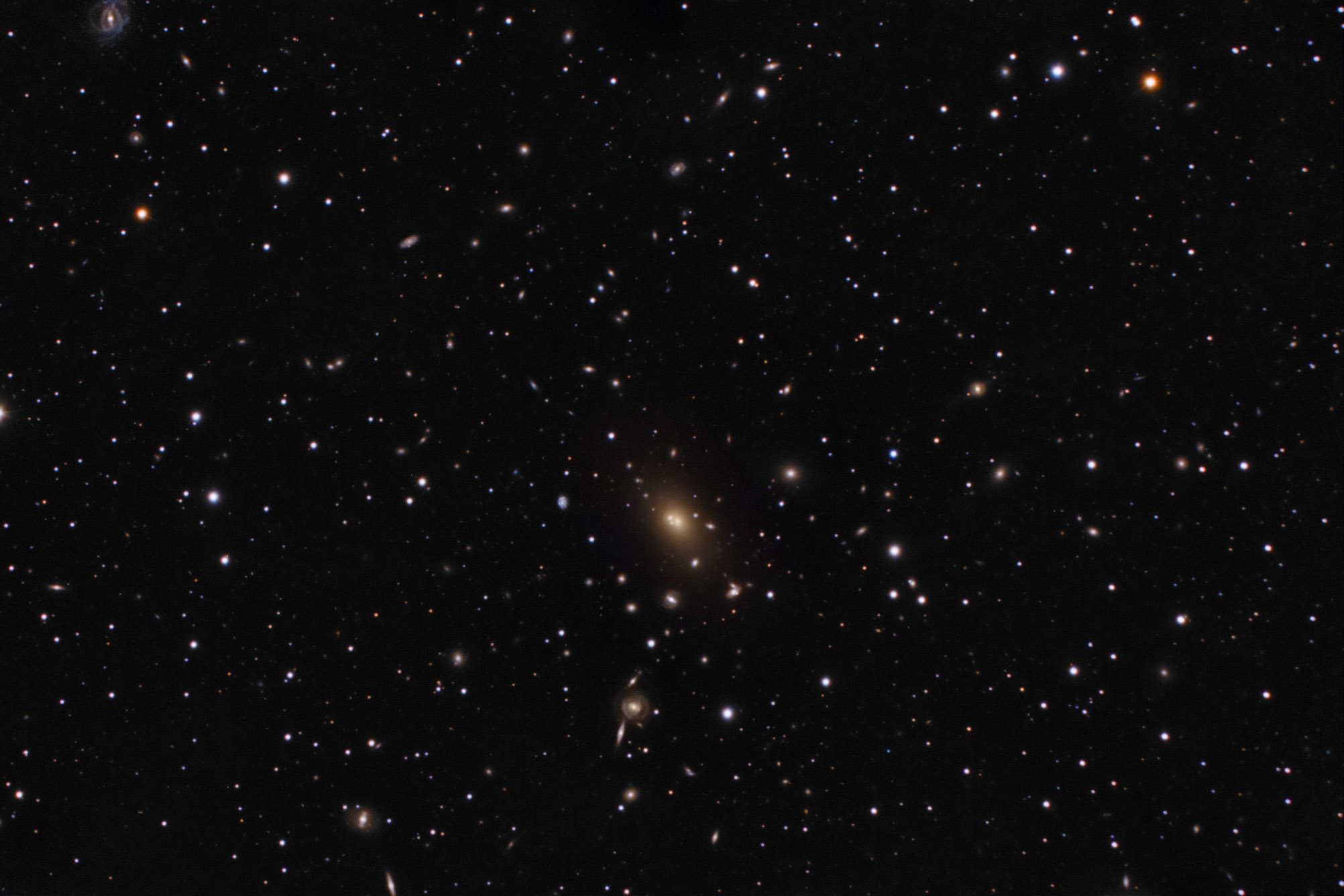