NGC 6207 is a much imaged galaxy but almost always because it is in the same field with M13 the rather famous globular cluster to its south southwest. It was on my to-do list as an object in the original Herschel 400 observing program. It was discovered by William Herschel on May 16, 1787. My comments from April 20, 1985 at 120x under fair skies (humidity reduced transparency) with my 10\" f/5 are rather sparse reading \"Small, oval galaxy, evenly bright. No nucleus seen.\" That\'s it. Apparently I wasn\'t impressed. My image shows a very obvious star near its nucleus. It appears to be about magnitude 13.5 yet I didn\'t mention it. I assume transparency was worse than I realized that night. It certainly is far brighter than the actual core to the south. So at least I was right that no core was seen. It\'s not obvious even in my image.

NED classifies it as SA(s)c with HII emission while the NGC Project says S... and Seligman says Sc?. Arm structure is certainly ill defined visually. References to IR images indicate the pattern may be stronger at that wavelength. One paper considers it an isolated spiral galaxy. It references 5 dwarf companions. These are labeled A-E in the annotated image. The paper is at: http://www.aanda.org/articles/aa/pdf/2008/32/aa09666-08.pdf and includes an IR image showing the spiral pattern a bit better than my image. The field stars are greatly suppressed in IR helping to show what it is hiding.

Distance to this galaxy is a bit of a puzzle. Many web pages say 30 million light-years but none give a reference. NED\'s redshift says 40 million while non redshift measurements there say about 62 million. So a two times difference. Also the paper mentioned above gives a size as 3 arc minutes. Even using their image I can\'t see it that large. I get about 2.7 arc minutes. Both on my image and theirs. Maybe they rounded. Using that I get a size of 23,600, 31,400 and 48,700 light-years. Flip that 3 sided coin. Though if the smaller sizes are right those dwarf galaxies are really super dwarfs. Dwarf E I measure at 5 arc seconds which is about 1,500 light-years at the 62 million light-year distance. These are tiny galaxies if the paper is right that they are part of the NGC 6207 system.

The other \"major\" galaxy usually captured in M13 images is IC 4617 an Sbc spiral according to NED and Sbc? by Seligman. It was discovered by Edward Barnard of dark nebulae fame. I can\'t find a date for its discovery however. This identification is a bit suspect. Barnard\'s position, and he was usually very accurate, has nothing but some of M13\'s stars. This galaxy is almost 1 minute further east and correct in declination. Thus most feel it is the galaxy Barnard found. Even Barnard could get something wrong it would seem. Though Barnard\'s notes appear to be missing so it could be Dreyer who got the position wrong. I agree with Seligman\'s length of 45 arc seconds which if the distance of 490 million light-years is correct works out to be a length of 107,000 light-years. Thus while it appears much smaller than NGC 6207 it is really much larger.

There are 3 proven quasars in the field and another 5 likely quasars. The latter are listed as UvES in the annotated image. Arp tried to link fields with lots of galaxies to active galaxies. Since NGC 6207 is not very active at all but for a few HII regions common to many spiral galaxies I wonder how he\'d have explained all these quasars. No matter how many such fields were pointed out to him he stuck to his ideas they were ejected from active galaxies and their great redshifts were unrelated to the expansion of the universe but depended on how long it had been since they were ejected. I don\'t pretend to understand his logic.

I was initially fooled by a galaxy on the western edge of my image ASK 256119. On my FITS images it appeared just like a typical asteroid trail but for being a bit dimmer at either end. I put that down to conditions where weren\'t all that great for transparency. But turns out the Minor Planet Center shows no asteroids in the field. The galaxy would appear to be a candidate for the Flat Galaxy Catalog but is too faint? It certainly has no significant central bulge.

The stars in the lower right of my image are on the outskirts of M13. That\'s why there\'s a sudden increase in stars in that part of the image. 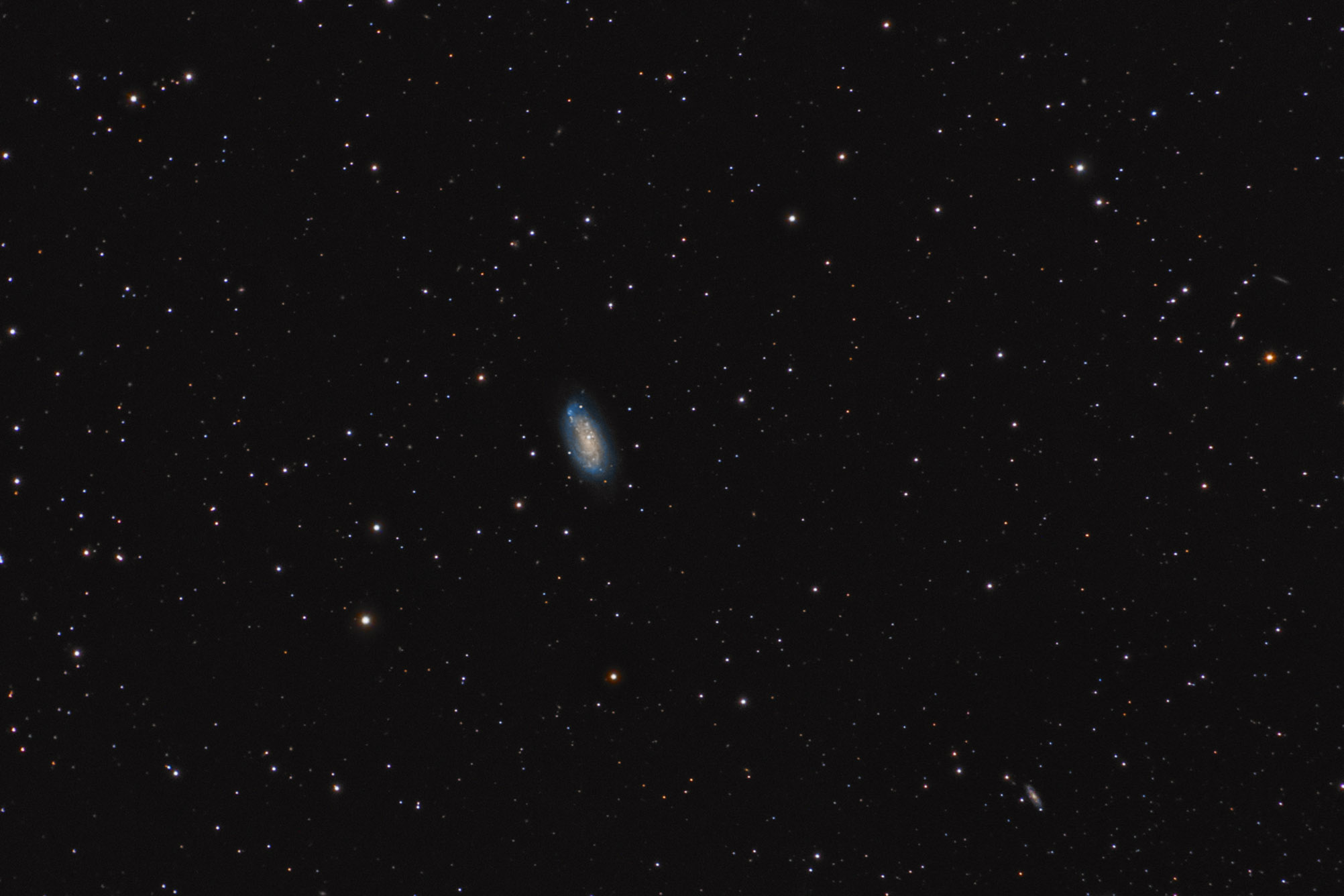 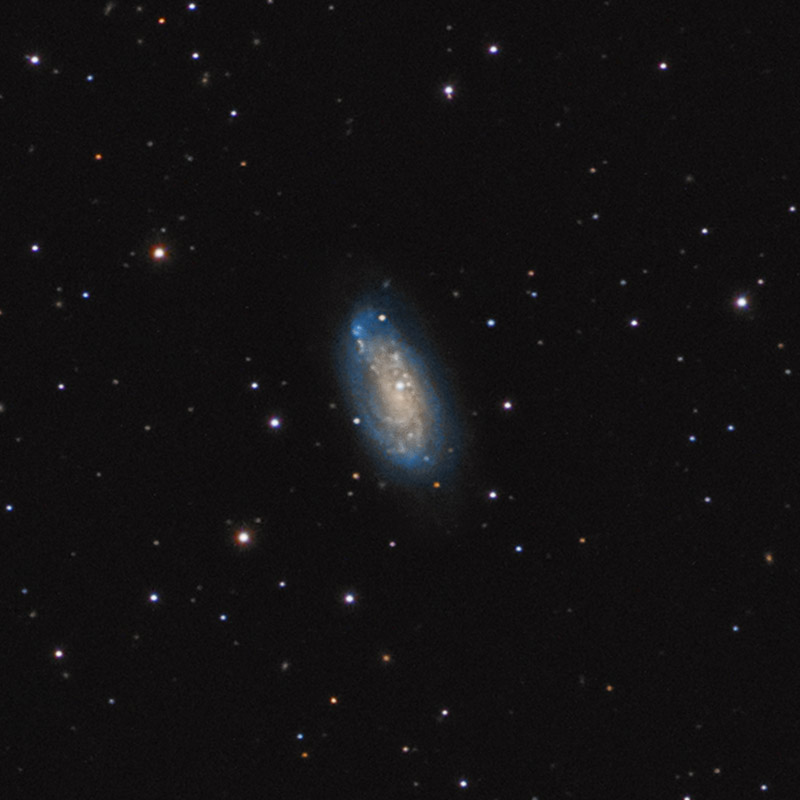 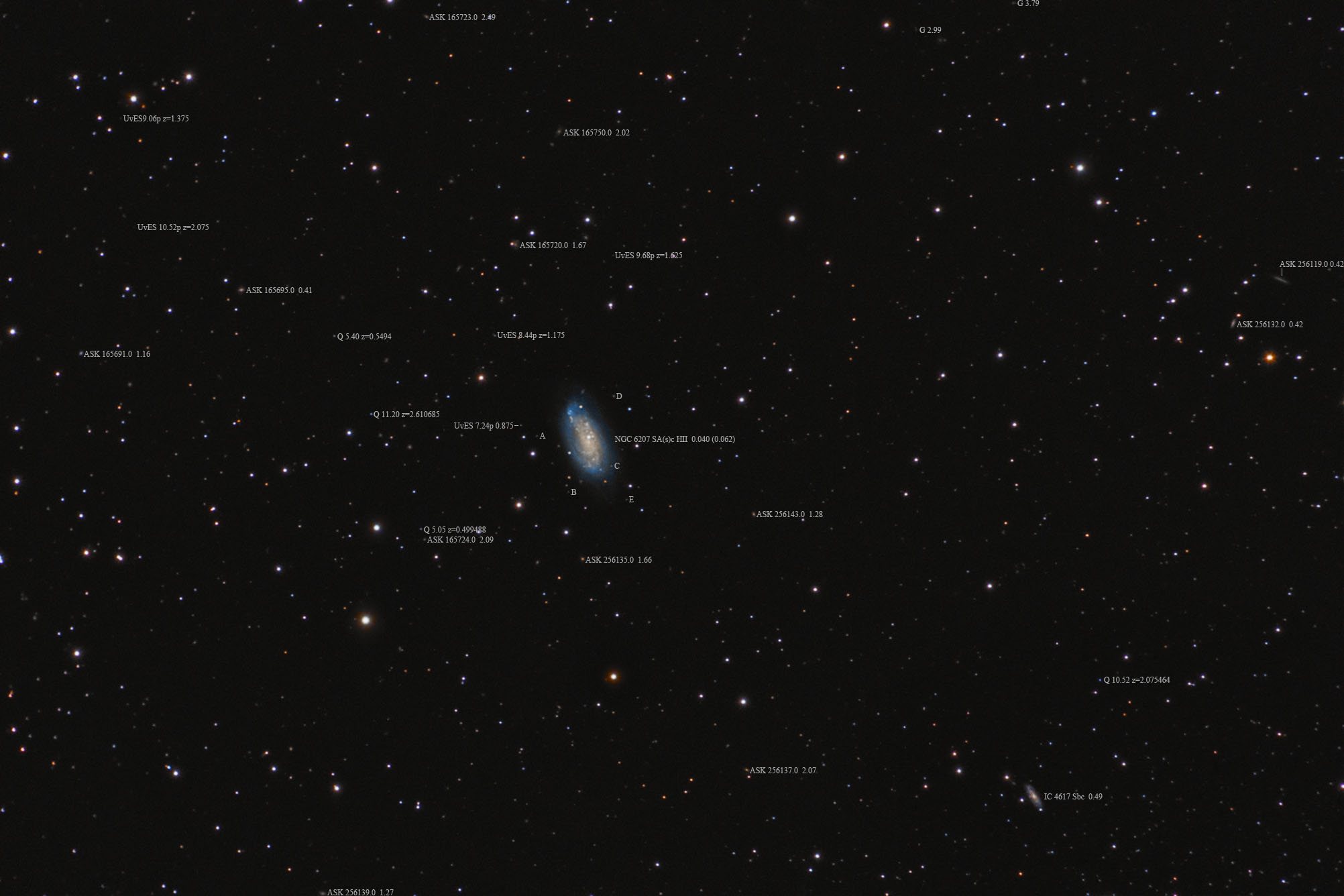