UGC 11007 is a mostly one-armed spiral in Draco. Its distance is unknown. While it shares the field with two NGC galaxies they appear far closer leaving the mystery of UGC 11007\'s odd shape unanswered. It is classed as simply as SB, no peculiar designation.

The two NGC galaxies are also interesting. NGC 6491 is classed as Sab. NED has two redshift measurements for it. The main one they prefer says it is about 240 million light-years distant while the other says 280 million light-years. As such measurements go this isn\'t a major difference at all. It is a very red spiral. I\'d have suspected a bar with the elongated core and red color (red spirals tend to be barred). It has a blue plume of recent star formation that really stands out against the rather bland galaxy. Was that triggered by NGC 6493?

NED has only one redshift for NGC 6493 that puts it at about 268 million light-years, between the two for NGC 6491 but closer to the less accepted value. Again these differences could reflect random motion differences. It is classed SAB(r)cd. While blue it isn\'t as blue as many of its type. Its arm structure is rather nonsymmetric. This could be natural or possibly indicate interaction with some other galaxy in the past. Flip a coin. In any case, this is an interesting group.

There\'s redshift data for only one other galaxy in the field. Draw a line from NGC 6493 through UGC 11007 and continue on a bit less than twice that distance and go up slightly. You come to VII Zw 747 described as a \"blue large knotty disc compact\". It is listed at about 525 million light-years distant so definitely unrelated to the NGC galaxies.

Another galaxy caught my eye. It is nearly directly above NGC 6491, two-thirds of the way to the top of my image. It looks like a comet with a short curving dust tail going up and to the right. At the end of the \"dust tail\" is a very faint galaxy (7 o\'clock from an orange star). That faint, star-like galaxy is SDSS J175000.63+614047.9 at magnitude 21.6. I mention it only because the far brighter and larger comet-like galaxy isn\'t listed at NED at all! Yes, it is a galaxy as I found it on the POSS plates. These interesting but uncatalogued galaxies drive my brain nuts. Why are the far fainter ones listed but these odd ones are sometimes missing? There\'s another comet like galaxy in the image. This one is above and a bit left of UGC 11007 in the cropped and enlarged image. It too isn\'t in NED. They don\'t seem to like comet-like galaxies it would appear. Again some far fainter ones are listed.

Arp was fond of saying that all galaxies are peculiar if you look close enough. This field would seem to support that idea. 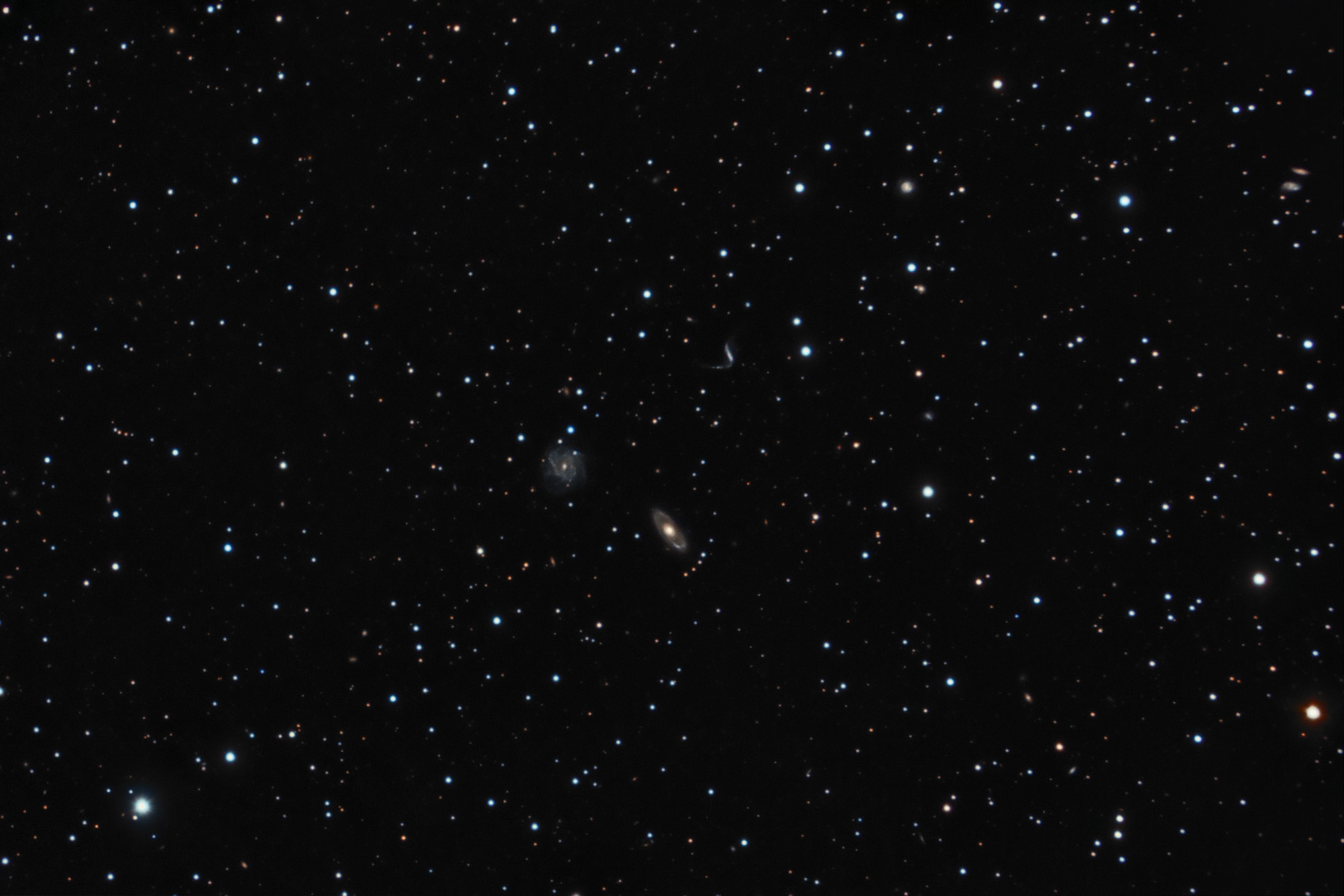 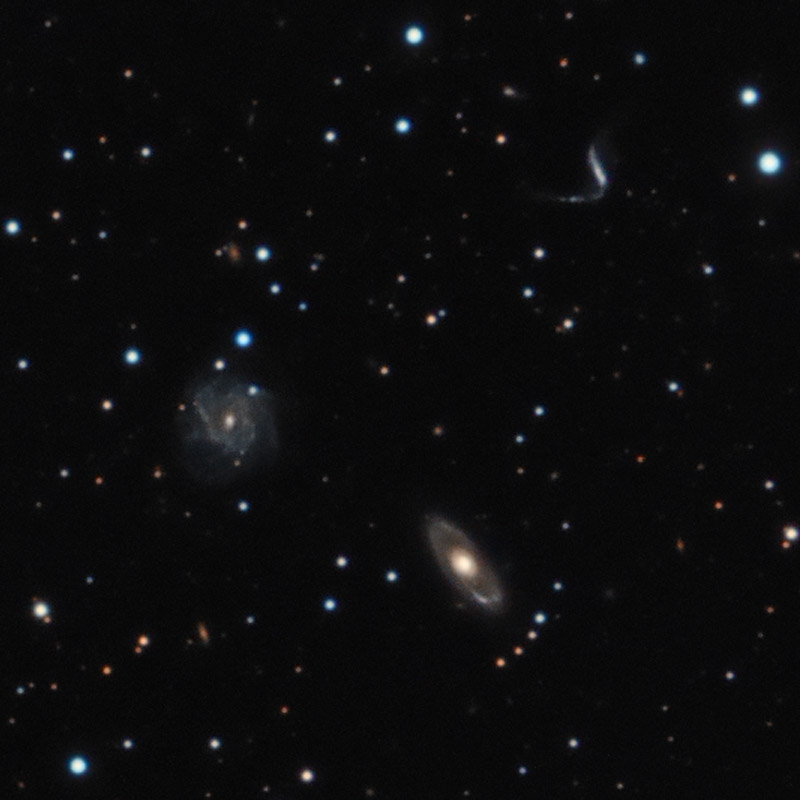 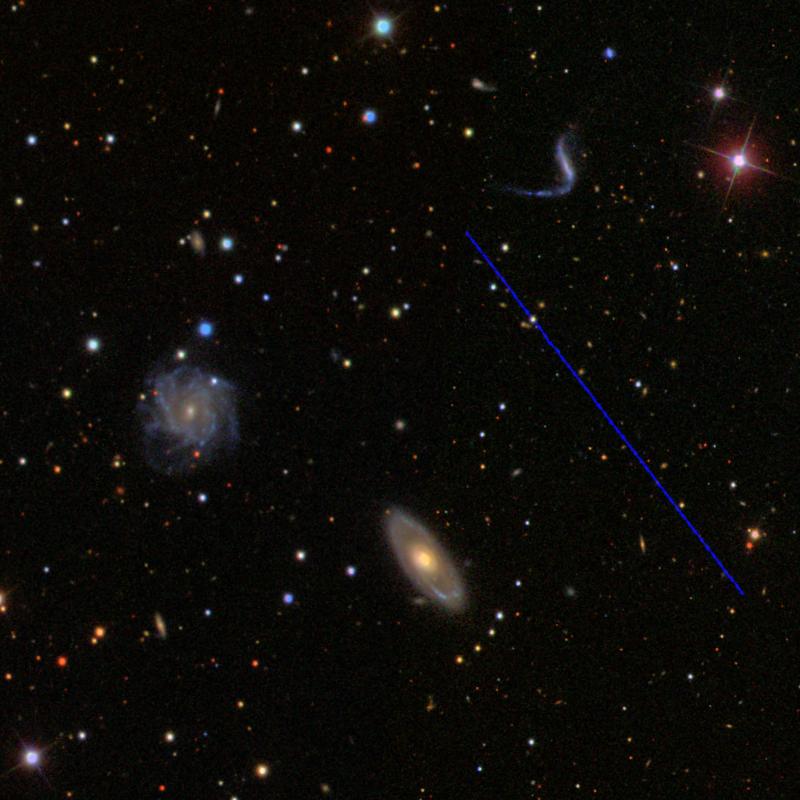