New math: 3 NGC objects + 2 galaxies = total confusion plus a loaf of sliced French bread. I should have known I was headed for confusion when I looked up NGC 6548, a galaxy on the H400 II observing program, in NED and was directed to the southwestern of a pair of galaxies. But The Sky went to the northeastern brighter one. Confused when I noticed the coordinates of the northeastern one matched the H400 II coordinates I went ahead and took the field. It wasn\'t until I processed the image and started in on my research that I saw what a can of worms I\'d run into.

The northern galaxy\'s an SB0 galaxy with a huge halo. It is a bit under 100 million light-years from us by redshift. Non-redshift measurements range from 125 to 174 million light-years. Using the redshift distance it is about 75 thousand light-years in diameter including the huge featureless halo. It is in the Herschel II observing program as NGC 6549. This is what the NGC project calls it as well but other sources list it as NGC 6548 and or NGC 6550 so depending on who you believe it is one of those three. William Herschel discovered it on September 20, 1786. Though he got the coordinates slightly wrong there\'s little doubt this is the galaxy he discovered.

The galaxy to the southwest makes a nice pair but they are an optical, light of sight, pair rather than being a related pair. It is 290 million light-years distant by redshift and between 75 and 280 million miles from us by non-redshift measurements. Using the redshift measurement it is a very large galaxy with a diameter of 130,000 light-years. It is classified as S?. It was discovered on July 27, 1864 by Albert Marth who gave accurate coordinates and on July 18m 1882 by Edouard Stephan who gave coordinates that leave no doubt this is the galaxy he saw but he also referred to a third object (he mentions Herschel\'s galaxy as the second). There is no third galaxy he might be referring to. Many have settled on the line of three equally bright stars east of the lower galaxy. The coordinates are too vague to know for sure. It was given the third NGC number of NGC 6550. Herschel\'s galaxy was given the NGC 6548 number since it was found first even though it didn\'t match the normal order of right ascension and Marth\'s galaxy NGC 6549. At this point, all was well in the world order. Then Lewis Swift came along and due more to a vague comment he made caused mass confusion. Since NGC 6550 didn\'t exist some were saying it was a double of Herschel\'s galaxy. Swift was trying to say it couldn\'t be because Stephan specifically mentions it. But somehow his remark was interpreted as saying NGC 6550 it was Herschel\'s galaxy, exactly what he was trying to say wasn\'t true. Others reading the remark right assigned 6550 to the southern galaxy and NGC 6549 to Herschel\'s galaxy. I can\'t follow all this logically but this is basically what Dr. Corwin of the NGC Project and Dr. Seligman are saying. Others have different interpretations that I found even harder to follow. Here\'s the result referring to the galaxies as the northern and southern one by source

Northern Galaxy
NED says it is 6550
Simbad, The Sky 6 and HyperLeda say it is both 6548 and 6550
The NGC Project, Herschel II observing list and Seligman say it is 6548
There is an HST image of its core taken in UV light that labels it 6550

Since these are the only two galaxies with redshift data (with three NGC identifications) in the image and there are no asteroids in it I\'ll avoid voting on who is right by not preparing an annotated image.

Now to see if there\'s any Jack Daniels left in the bottle.

But do take a close look at the southern galaxy. It is awfully strange. Something that has mostly gotten lost in all the to-do about which NGC number belongs to which galaxy. It has two strange features. One that does get mentioned is the object on its southeastern side that juts out. Is it a jet or separate galaxy. Since this field is in the Zone of Avoidance it isn\'t covered by the Sloan survey. I found papers asking this question but none answering it. Unable to find a single image with better resolution than mine (hey you guys with better seeing than I have you may be able to answer this question) I\'ll say to me it appears to be a separate galaxy but higher resolution may say otherwise. The other strange feature is the diagonal dark lanes that divide the galaxies length into 5 segments much like you might cut up a loaf of French bread. They appear virtually parallel to each other and divide it into somewhat equal segments but for the larger middle one. They seem to start from what appears to be an equatorial dust lane along the northwest side of the galaxy. The odd jet-like feature seems to spring from one of these lines. Coincidence? Probably. 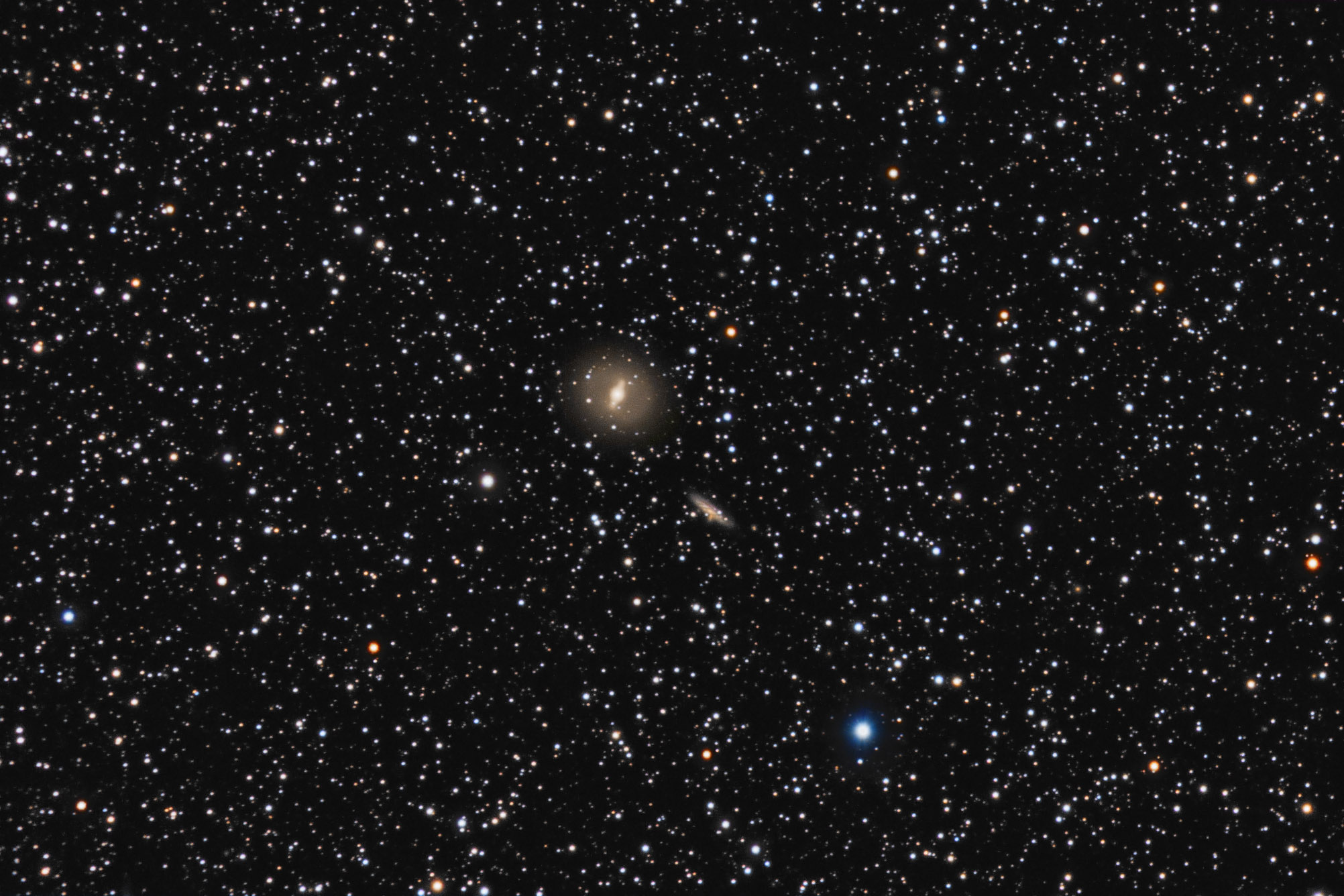 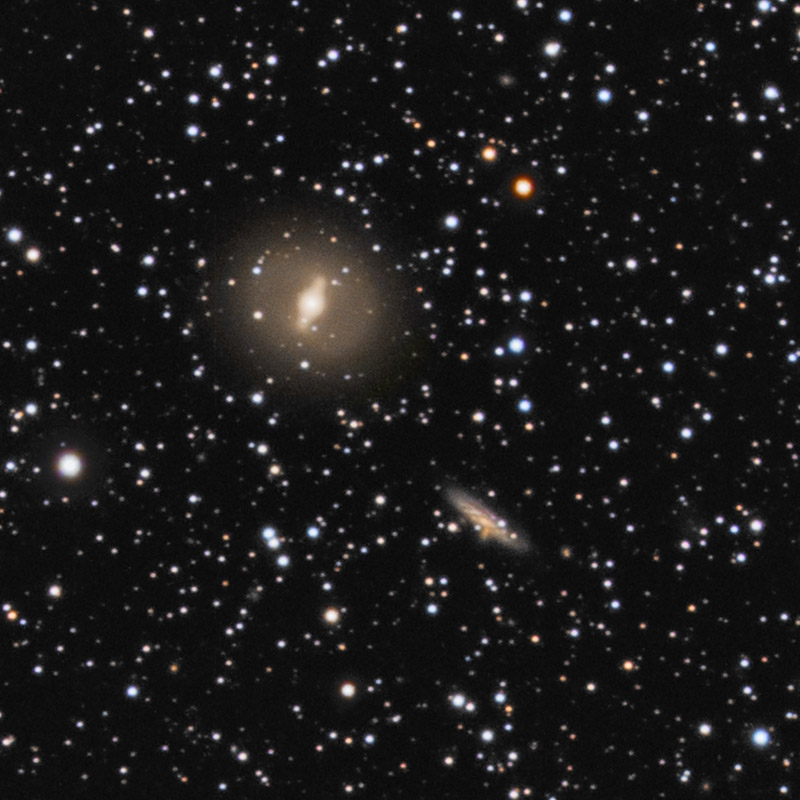