This is one messed up galaxy, in more ways that it may first appear. First off it is obviously a highly disturbed galaxy with huge plumes. These would indicate it is a result of a recent merger. Also, it is quite red, even the plumes aren\'t very blue indicating the merger didn\'t result in much new star formation in these plumes. Usually, tons of new stars form in these plumes making them rather blue in color due to the short-lived massive blue stars that form there. But this galaxy has an overall reddish hue, while some areas look blue if you check the color in an image processing program you\'ll find even those areas are somewhat red. It\'s just that thanks to the contrast to the very red regions these look somewhat blue when they really aren\'t. So we are seeing an old galaxy here. If new stars are forming they are hidden behind dust shields, likely near the galaxy\'s core. It is classified at NED as SABab? pec. The NGC project says Sbab/P. This is likely a typo and they intended SBab/P which is what Seligman says for its classification.

It is messed up in another way having nothing to do with its condition. It carries three NGC numbers, NGC 6667, NGC 6668 and NGC 6678. Normally this is due to independent discoveries by three different astronomers, each giving somewhat different coordinates causing Dreyer to enter it under the different numbers. In this case, however, it was the same astronomer finding it three different times and not realizing it. The award for such sloppiness goes to Lewis Swift who found it on September 11, 1883 and listed by Dreyer as NGC 6667. Then again he found it on June 8 1885 and listed as NGC 6678. Finally he \"found\" it yet again nearly 14 months later on July 31, 1886 getting the designation NGC 6668. The second IC tries to equate it to NGC 6677 a degree to the south so that can\'t be right. Most think it a typo for 6667.

Being far north and in the summer sky, it is in a poorly studied region. Only one other galaxy has redshift data and that is a faint starlike galaxy on the southern edge of my image at pixel 1372x1324 +/- about 5 pixels for those who absolutely have to find it. It is some 4.89 billion light-years distant and is listed as an AGN. The position is listed as being up to 5 seconds of arc in error. It is NEP 5750 for those wanting to look it up. That stands for the North Ecliptic Pole catalog if you were wondering.

The only other obvious galaxy in the image is the flat galaxy FGC 2208 southwest of NGC 6667. NED has no distance data on it. It is listed as an Sc galaxy. With nothing much to annotate, I didn\'t prepare an annotated image.

This was taken on a night of rather poor seeing that was unusually warm. That results in poor transparency and my being unable to reach my normal summer imaging temperature of -25C. I had to work at -15C which degrades the S/N slightly. I had just time enough for 5 luminance frames before the moon interfered too much. That extra frame brings the signal to noise ratio back to normal if transparency is normal which it wasn\'t so this one is still a bit noisy. For some reason, I never went back to retake it. However, due to conditions, I didn\'t take color data that night. I took color data a few nights later with better transparency but even worse seeing. Not sure if this was a good idea or not as the red data really suffered from seeing creating bloated stars that were a pain to deal with. 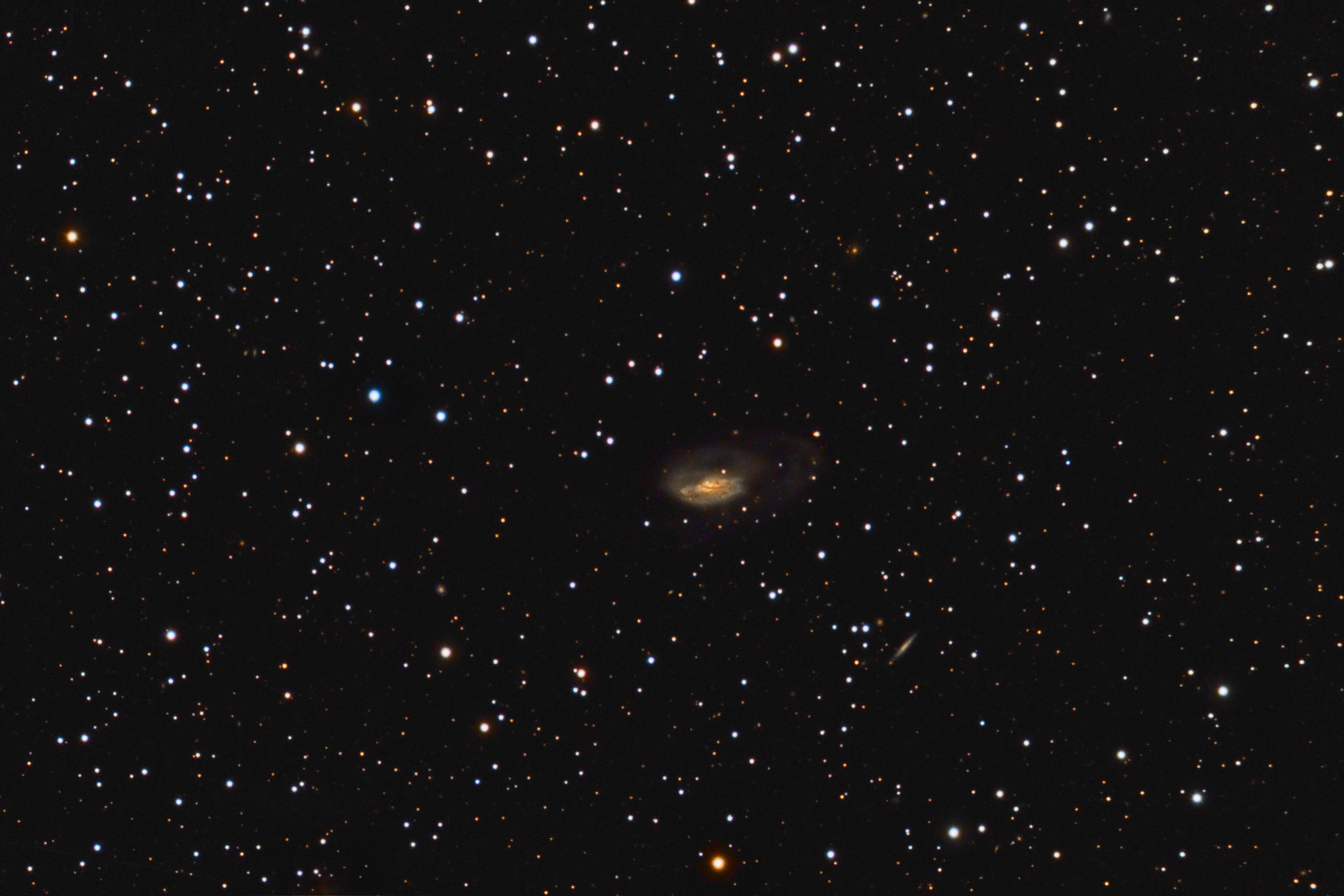