\"UGC 1256 In this SB(s)cd spiral companion of UGC 1249, the HII regions are arranged along a bar in the inner parts and seem to draw a weak spiral structure around it. For this late type galaxy, no clear nucleus can be seen on the continuum map which shows several knots in the central part. The rotation curve, like that of its neighbor UGC 1249, is irregular, notably in the inner parts where it shows a counter-rotation motion. Indeed, one can see an inversion of the sign of the velocities within 20 arcsec of the center, corresponding to two HII regions (that surrounded by the isovelocity 420 and that on its right), with a symmetric behaviour for both sides of the rotation curve. The center of rotation has been chosen in order to have the two sides of the rotation curve symmetrical, but we want to underline the fact that this peculiar motion of counter-rotation persists if we choose another knot as the center, showing that this motion is real. The curve begins to be fairly symmetric beyond 100 arcsec (3.9 kpc), seeming to reach a plateau around 80 km s^-1^. However, according to the HI data, the plateau could be around 120 km s^-1^. Unlike what Carozzi-Meysonnier (1982) claimed (namely that UGC 1256 was less affected by the interaction according to optical studies), it is hard to estimate which galaxy is the more perturbed. Concerning its content in atomic hydrogen, the WHISP data show that its column density is very high in the optical disk (more than 20 x 10^20^ atoms cm^-2^), and that there is an extension of neutral gas to the north of the galaxy, which could be a tidal tail due to the interaction.\"

NGC 672 was discovered by William Herschel on October 26, 1786. It is in the second H400 observing program. Unfortunately my log for that never made the move to Minnesota for some reason.

For IC 1727 it says:
\"This SB(s)m galaxy exhibits an asymmetric structure on the DSS image also observed on the Ha emission, which is mainly localized in what looks like a central bar and on the north-west side, suggesting a distorted spiral arm. No clear nucleus was detected on the continuum map and the center of rotation was chosen in order to derive the most regular and symmetric rotation curve possible. This rotation curve is quite chaotic but it seems that (from the approaching side) we reach a plateau at 70 km s-1 beyond 130 arcsec (2.8 kpc). About 9 arcmin to the north-east, UGC 1249 has a companion, UGC 1256, with which it seems to be interacting. Indeed, on the HI map derived by WHISP, one can see that their HI disks are contiguous and their velocity fields are regular and show a continuity in the isovelocity lines. The amplitude of the HI velocity field is in agreement with that derived by GHASP, confirming that we reach a plateau on the approaching side. \"
http://adsabs.harvard.edu/cgi-bin/bib_query?2003A%26A...399...51G

Only three other galaxies in the frame have redshift data and one of those is nearly off the frame. The pair of galaxies along the north edge toward the left corner are CGCG 482-017 at about 480 million light-years. The remaining galaxy is also at 480 million light-years. It is very small and faint. For those who want to track it down it is at pixel 123x954 near the left edge below center. The only \"bright\" galaxy in the image beside NGC 672 and IC 1727 is LEDA 1803573. It is the orange spindle just east (left) of the south end of IC 1727. NED had no redshift data for it. It is obviously a background galaxy. 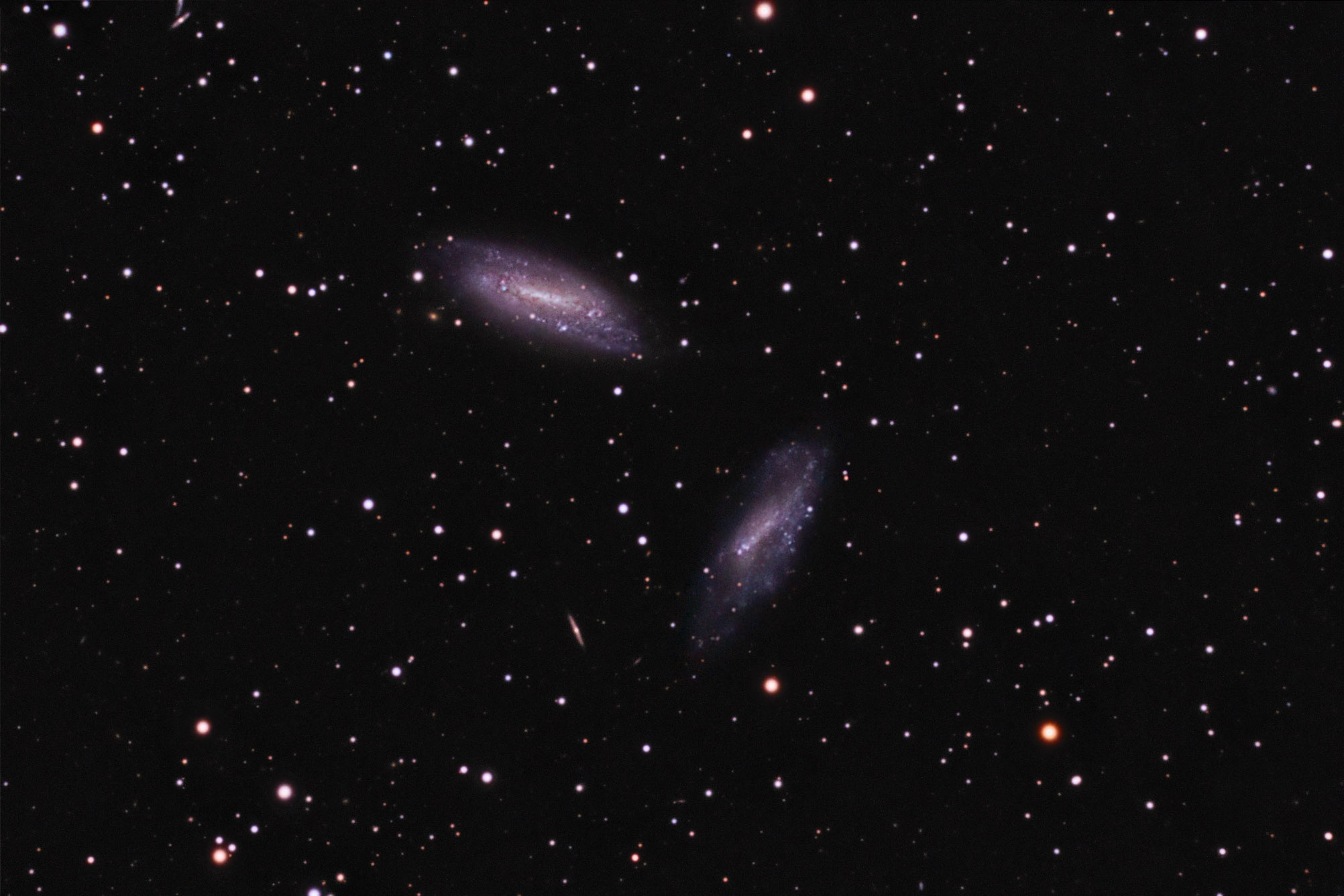