NGC 6749 is another golden globular cluster (maybe) in Aquila that is seen through a lot of galactic dust that is dimming it by up to 4.5 magnitudes. Most consider it the most difficult NGC listed globular star cluster north of the celestial equator and second only to NGC 6830 at -39 degrees. It was discovered by John Herschel in 1827 with his 18.7\" reflector. He described it as consisting of large and small stars. This is odd because I find no reports of any stars being seen it in with a modern 17\" scope. But he also says it fills the field with stars. Considering it is only 3 minutes of arc across at most in a modern 17\" scope it sounds like he was seeing field stars rather than actual members of the cluster.

It is also cataloged as Berkeley 42, an open star cluster. WEBDA just notes \"May be a globular cluster.\" All other modern sources are confident it is a globular. I do find WEBDA\'s data conflicting with most other sources. For instance, they put it at 6000 light years from us while most other sources say 25,800 light-years, over 4 times more distant. WEBDA also gives it an age of 2.1 billion years. Old for an open cluster but too young for any other known globular cluster. They do have it cataloged as Berkeley 42 open cluster, not its NGC designation. SEDS gives it a size of 5.2 arc minutes. That would make it only 9 light-years across. Again, that doesn\'t fit a globular cluster. But at 25,800 it would be 39 light-years. Still small for a globular but considering the 4.5 magnitudes of extinction it is likely much larger than the 5.2 minutes cited. The long dimension, mostly north to south, in my image, is about 3.5 minutes across.

The Sky and others seem to list the position of Berkeley 42 a few minutes west and a bit south of the position for 6749. Sufficiently far that even the outer edges of NGC 6749 doesn\'t overlap the center position given for Berkeley 42. The Sky lists the two separately. Giving the position of NGC 6749 correctly and showing Berkeley 42 as being 2.6 minutes away at position angle 245 degrees. That would put it near the blue star at about 3:30 and one cluster diameter away. I see no cluster in the area other than the obvious one. Also in researching this, I found a paper, http://arxiv.org/pdf/astro-ph/0410325.pdf , from a Chinese Observatory that does consider it an open cluster with an age of 6 billion years. They make no mention it might be a globular cluster. I\'d think that important. Maybe not. In all, I\'m left \"Lost in Space\" without a robot to help me. Well not totally lost. The golden color is a good clue it likely is quite distant. That plus its size and star concentration heavily favor the globular cluster side as far as I\'m concerned. 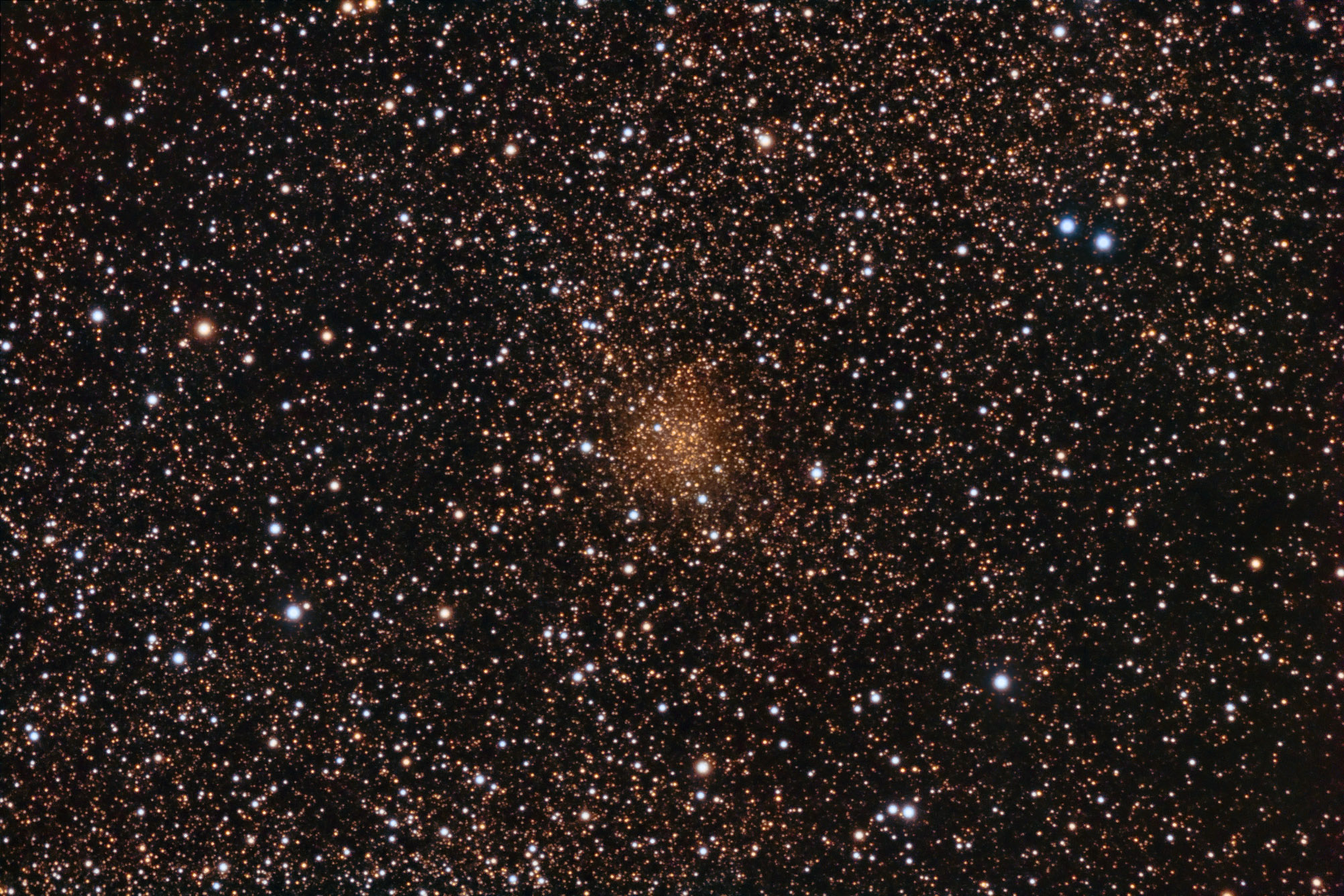