NGC 6791/Berkeley 46 is an often overlooked star cluster in Lyra. Everyone goes there for M57 the ring nebula and sometimes for its globular M56 but few ever stop by to see this cluster. Too bad as it is quite interesting and a big problem for astronomers. It is a rather large but distant cluster at 13,300 light years give or take a few hundred.

Normally star clusters are thought to form from a cold molecular cloud. As the first stars form the really big ones shine in ultraviolet light and this lights up the Hydrogen by causing it to glow its characteristic pink color but they also start to disrupt star formation by heating the dust and gas to where it is too hot to condense to form stars then blowing it away before more can form. This tends to limit the size of most clusters to a few hundred stars. But this cluster contains several thousand stars. It could be that it just didn\'t form the massive stars needed to disrupt star formation and thus more stars formed. We see several other large clusters. This one though is very old. Most clusters are torn apart by the tidal forces of our galaxy and only last a few hundred million years if that. Our sun is thought to have formed in such a cluster that has since so broken up we are hard pressed to find any other cluster members due to the passage of some 4.5 billion years.

This cluster though has a star population that is about 8 billion years old and shows no sign of being torn apart. But this isn\'t a mystery. Its location and mass are such that the tidal forces haven\'t been able to overcome the gravitational force of the thousands of stars to tear it apart. Several other such clusters are known such as M67 in a previous update.

What is really odd though is that instead of all the stars being about the same age it also contains a smaller population of 6 billion year old stars and another of 4 billion years. Adding to the confusion the 6 billion year old stars are all white dwarfs, that is, dead stars that are just cooling embers today. This means this population was made up of stars all of which were more massive than our sun. Rather than a mix of masses that you\'d expect. I know of no other cluster that can claim this and how it came to be is a big mystery.

But this isn\'t the only mystery. For that, we must go back to the original stars in our universe. After the big bang, the universe consisted mostly of hydrogen and helium. Other elements, mostly lithium existed in such small amounts as to be totally insignificant. As the first stars aged they, like today\'s stars, first turned hydrogen into helium for energy then helium into carbon. Really massive stars then turned the carbon into heavier elements all the way up to iron. When these massive stars died in supernova explosions they spread these elements through the universe where they were picked up by newly forming stars. So this next generation of stars had more of these heavier elements than did the first. Astronomers call these heavier elements \"metals\" even though many (like carbon and oxygen) certainly aren\'t what a chemist would call a metal. Each succeeding generation had more of these metals than the previous. So by the metal content of a star, you should be able to get a rough idea of when it formed. Since some areas of our galaxy had more metals than others this is only a rough guide and there are far better ways to determine the age of a star. Still, the two should have some agreement.

NGC 6791 is a huge exception to this. Its 8 billion year old stars contain far more of these metals than our much younger sun. No one can explain this as yet. So how this cluster got so \"dirty\" is a huge puzzle. Stars forming three different times and having far too many metals makes this a highly studied cluster but so far the answers have been slow in coming. Maybe one of the students seeing this update will be the one to find the answer to this or at least determine if there\'s a connection between the triple population problem and the metal surplus problem.

This cluster was discovered by August Winnecke in December 1853.

For more on this and Hubble\'s view of the very core of the cluster (it can\'t see the whole thing with its narrow vision) see:
http://hubblesite.org/news_release/news/2008-25 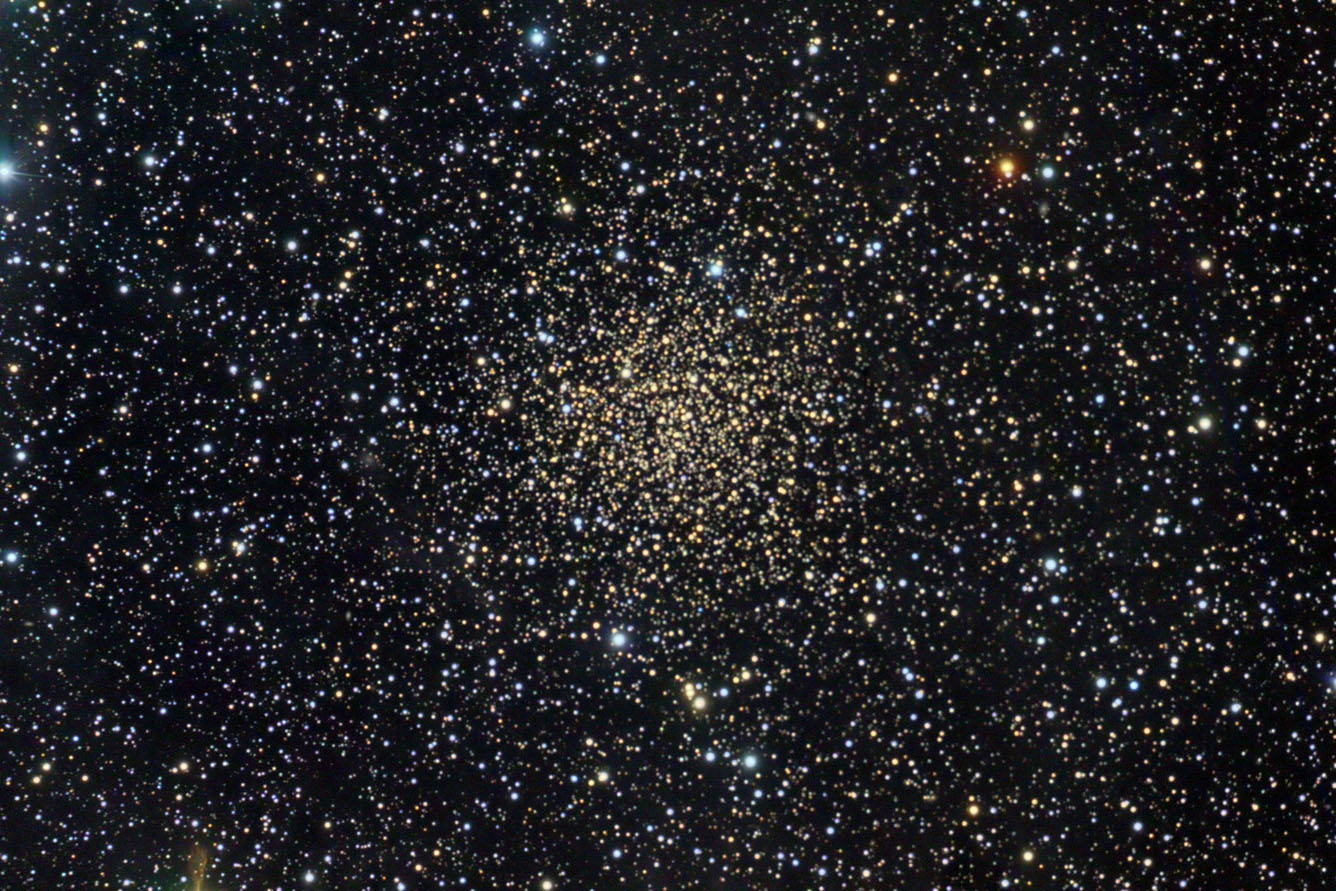