NGC 6801 is a rather odd spiral in northeastern Cygnus. NED classifies it as SAcd, The NGC Project says Sc while Seligman says Sc?. Note how two arms curve out of the core to the south then turn and go straight to the edge of the galaxy. The northern one seems to suddenly turn north and sort of follow the edge of the galaxy but again in a straight line. I think this more an illusion due to a small field star in our galaxy and a star knot in the arm defining a line that isn\'t there. But the part coming out to the edge certainly is straight. Arp had a classification for spirals with a heavy arm. Often this was straight as in the most famous example, M101. In fact, the one in M101 does go out straight then bend at about a 75 degree angle and continue on straight until it again bends at about 60 degrees and continues on straight yet again. These two arms aren\'t heavy but they sure are straight.

NED\'s redshift puts it some 190 million light-years distant. But its 9 Tully-Fisher measurements range from 143 million to 192 million with an average of 166 million and a median of 152 million. So roll a 10 sided die and see what comes up. Using the redshift value it is about 80,000 light-years in diameter. A reasonable value for a spiral galaxy for whatever that is worth. The closest measurement makes it 60,000 light-years across, also reasonable. Being in the Zone of Avoidance it isn\'t well studied so I don\'t expect this issue to be resolved anytime soon.

The galaxy was discovered on August 5, 1886 by Lewis Swift. I\'ve not tried to view it visually. Steve Gottlieb\'s description at the NGC Project calls it \"faint\" in his 17.5\" scope so it would be difficult at magnitude 13.9 in my 10\" scope used for my visual work.

Though the galaxy had a supernova (well it was still preliminary when I took the image) which I\'ve marked in the annotated image. It is thought to be a type II SN so not all that useful for determining distance. That may explain its somewhat red color. I\'d expect it to be blue but some Type II explosions result in some H alpha which might be causing the reddening. Or it\'s just due to looking through the dust of our galaxy as this region is very dusty. But on May 21, 2011 a type Ia, SN 2011df, blew in it. Yet I didn\'t find it had been used to calculate a distance to this galaxy. It has long since faded away. It was located just under the \"19\" in the label for the new supernova. Thus well outside the visible disk of the galaxy indicating it is much larger than I\'m measuring it.

I didn\'t know of the supernova when I took it. Only a few weeks later when I was reviewing the frames to make sure I didn\'t need to retake any (weather has been so bad I\'ve needed a lot of retakes during this period) I saw a star that didn\'t belong. A check of David Bishop\'s supernova pages showed me it was discovered a month before I took my image. I see it is now officially SN 2015af. 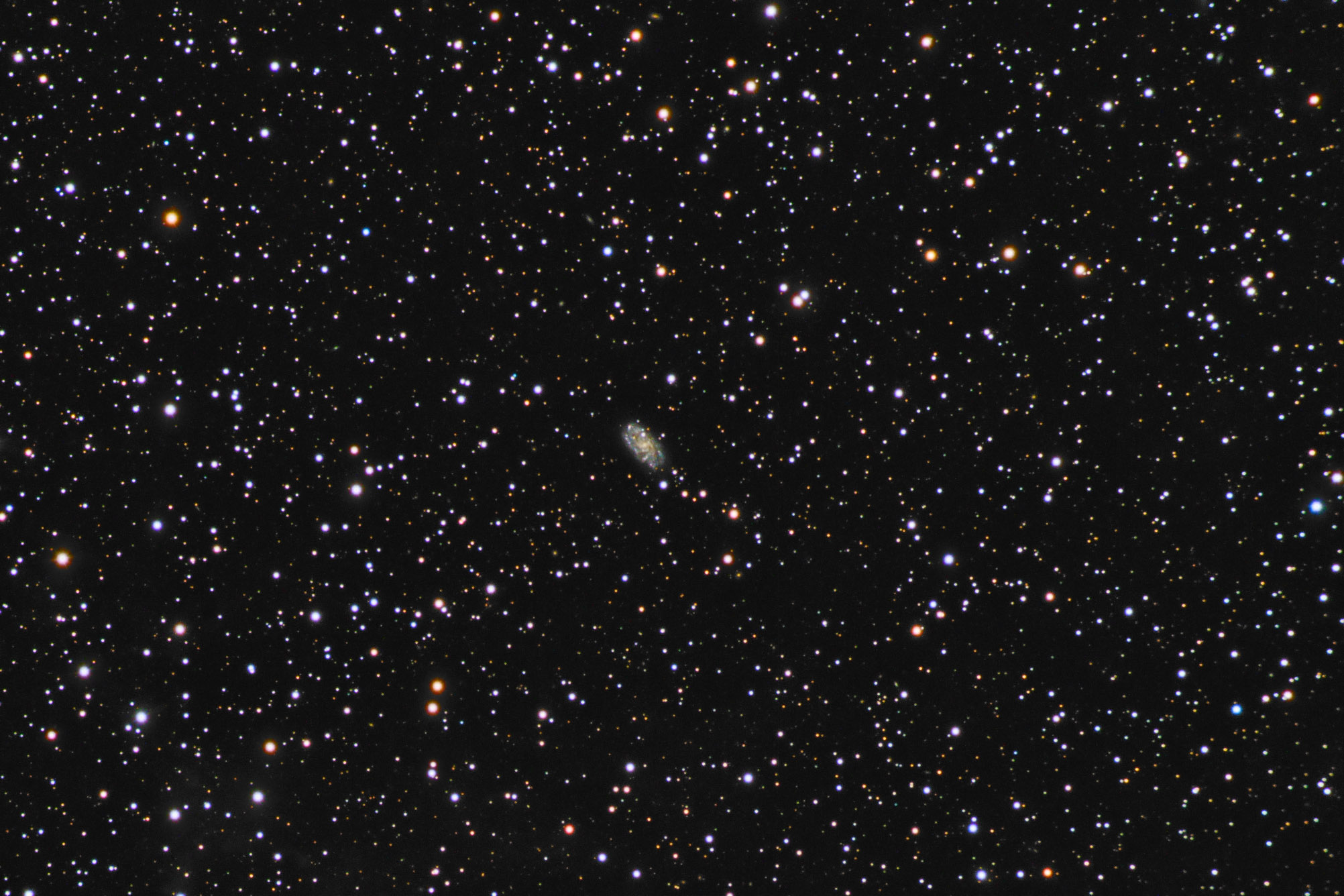 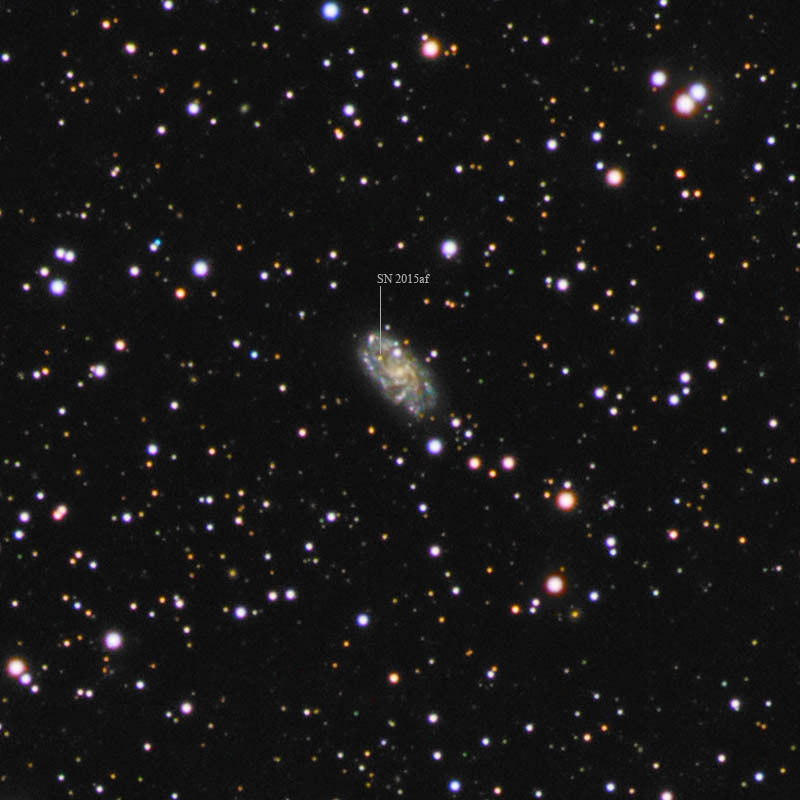 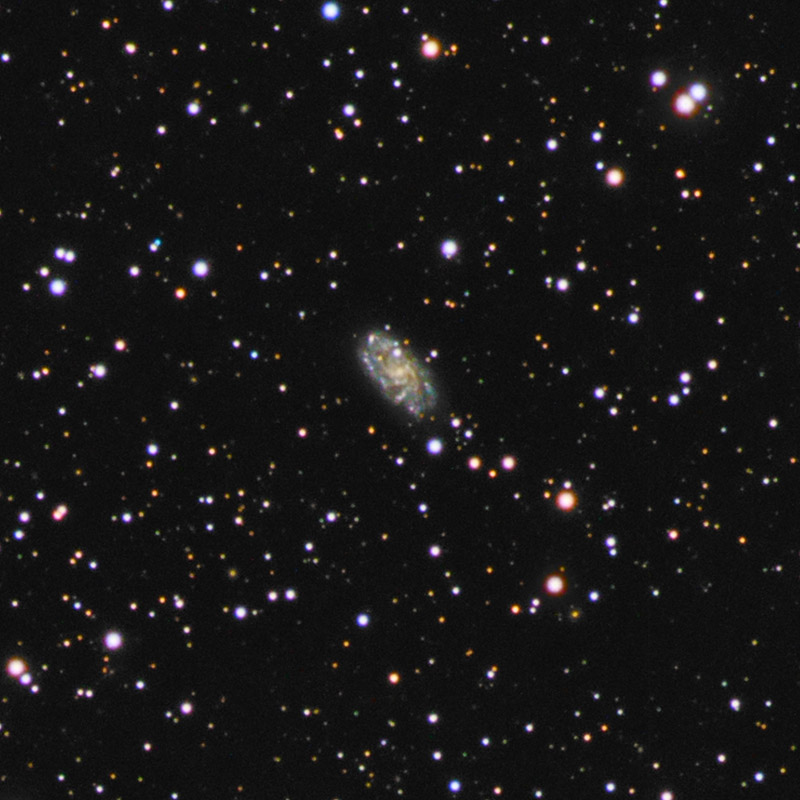