NGC 6836 is a rather odd spiral galaxy in northeastern Sagittarius. It\'s a rather featureless low surface brightness galaxy with a few scattered blue star clusters. Any hint of arms in the featureless disk is so faint I can\'t really see any. The RC1 (Reference Catalogue of Bright Galaxies -- 1964) Describes it: \"Bright middle, no bright nucleus. Very faint spiral arms or arcs. Very poorly resolved. Low surface brightness. Non-interacting pair with NGC 6835 at 7.5 arcmin.\" I find the \"...no bright nucleus\" part hard to understand as my image shows a tiny but bright nucleus. It is classified as SABm with a redshift distance of 65 million light-years. At that distance, it would be about 29,000 light-years in diameter so a near dwarf. Unfortunately, that\'s about all I was able to find on it. Thanks to the odd gap in its disk filled by three bright field stars in our galaxy it looks like a glutinous Pac-Man that is eating three pellets at a time.

It\'s companion to the northwest is NGC 6835. It appears to be an edge on spiral. The 1994 Carnegie Atlas of Galaxies Vol. 1 says of it: \"The classification of NGC 6835 is uncertain. From the asymmetry in the pattern seen in the short-exposure image at the top right, one guesses the presence of spiral structure ... No resolution into components of the stellar content is seen ... the Amorphous? classification is suggested.\" NED classifies it as SB(s)a? with some spectral lines. Its redshift is similar to that of NGC 6836 putting it 64 million light-years from us. This indicates they are likely true companions. It\'s much larger angular size gives it a diameter of 45,000 light-years, rather typical of many spirals.

Both NGC galaxies were discovered by Édouard Stephan on the night of August 2, 1881.

Sloan indicates about 0.54 magnitude loss in green light and 0.4 magnitudes in red. Another source puts blue\'s loss at 0.62 magnitudes. I applied these adjustments to the two galaxies. Stars and other galaxies were adjusted to G2V standards. Usually, I don\'t adjust galaxies separately but without this NGC 6836 was mostly white and NGC 6835 too red. They looked more \"natural\" with the adjustment.

NED had redshift data for only one other galaxy in the image. It is shown on the annotated image. I\'d ordinarily not prepare one for a field with so little in it but two of the three asteroids wouldn\'t be found without one.

Conditions for this one, as usual, were very poor. The third frame of 4 was mostly lost to conditions as shown by the gap in the asteroid trail. Seeing deteriorated and was really bad for the red frame. This results in some red halos around brighter stars as their size was nearly double the blue stars. It didn\'t help that this field is at my southern limit for even a very good night. But considering how poor conditions have been all year I\'ve have little to do if I waited for good conditions. 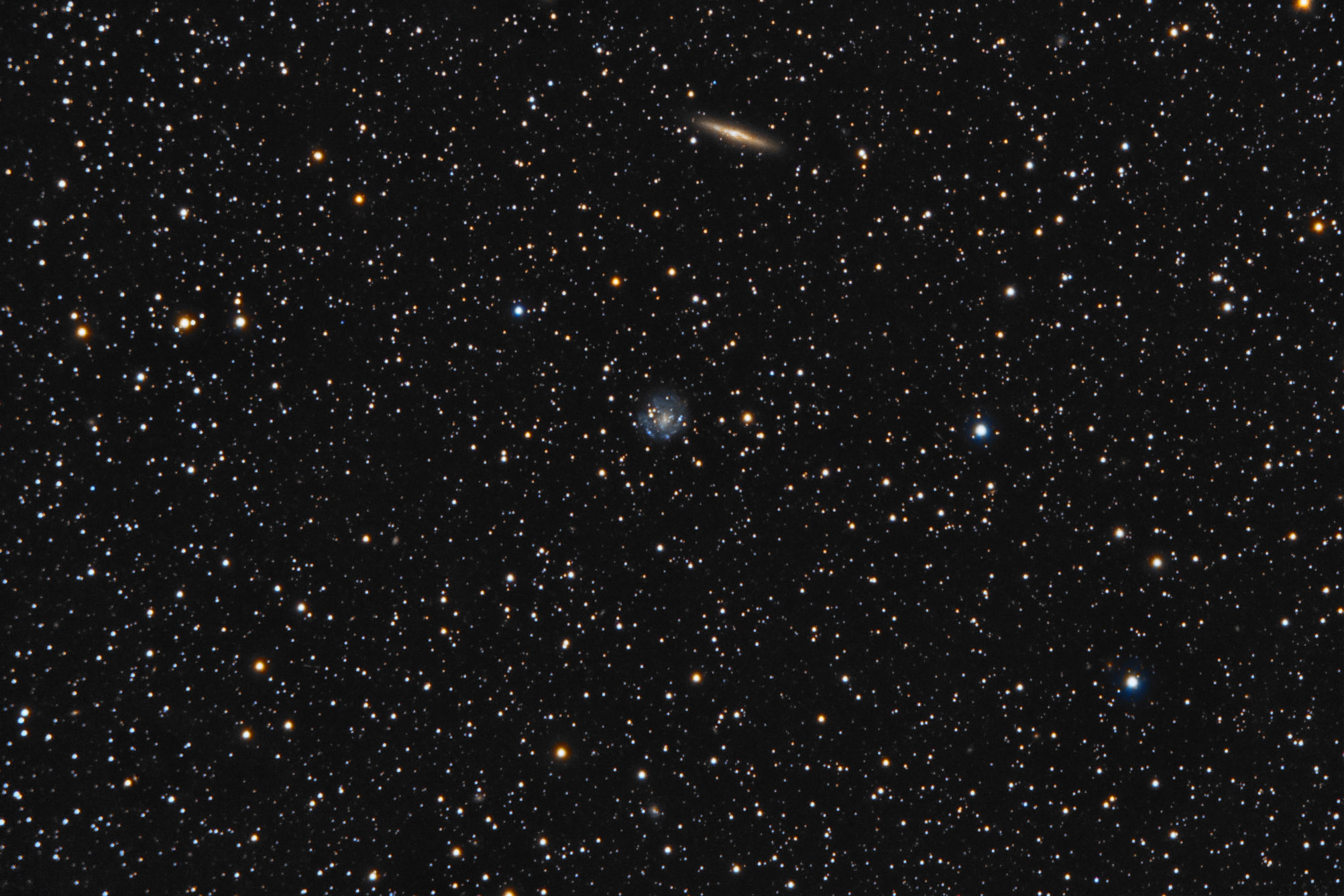 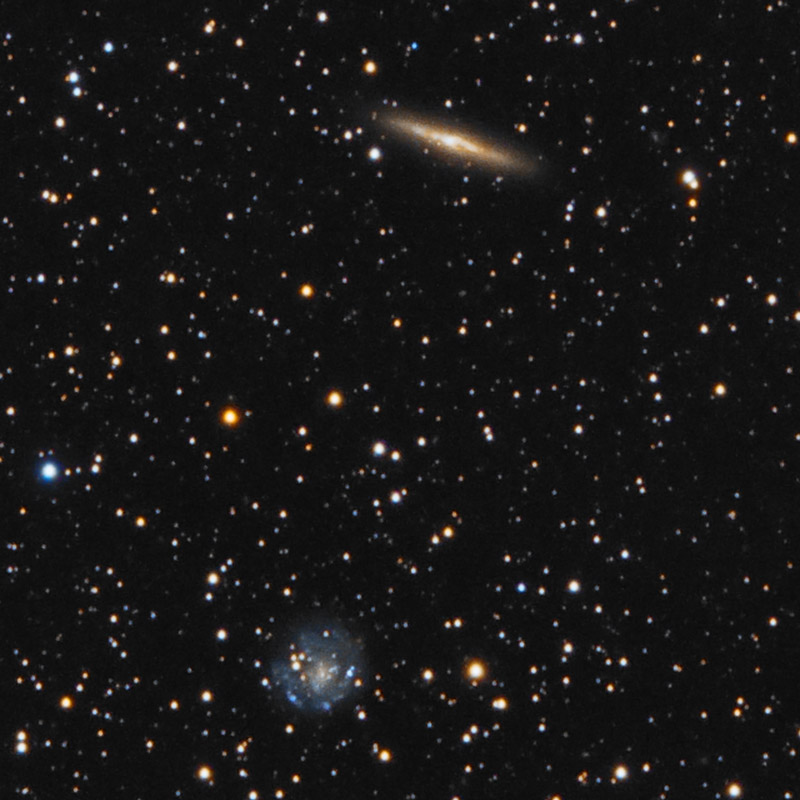 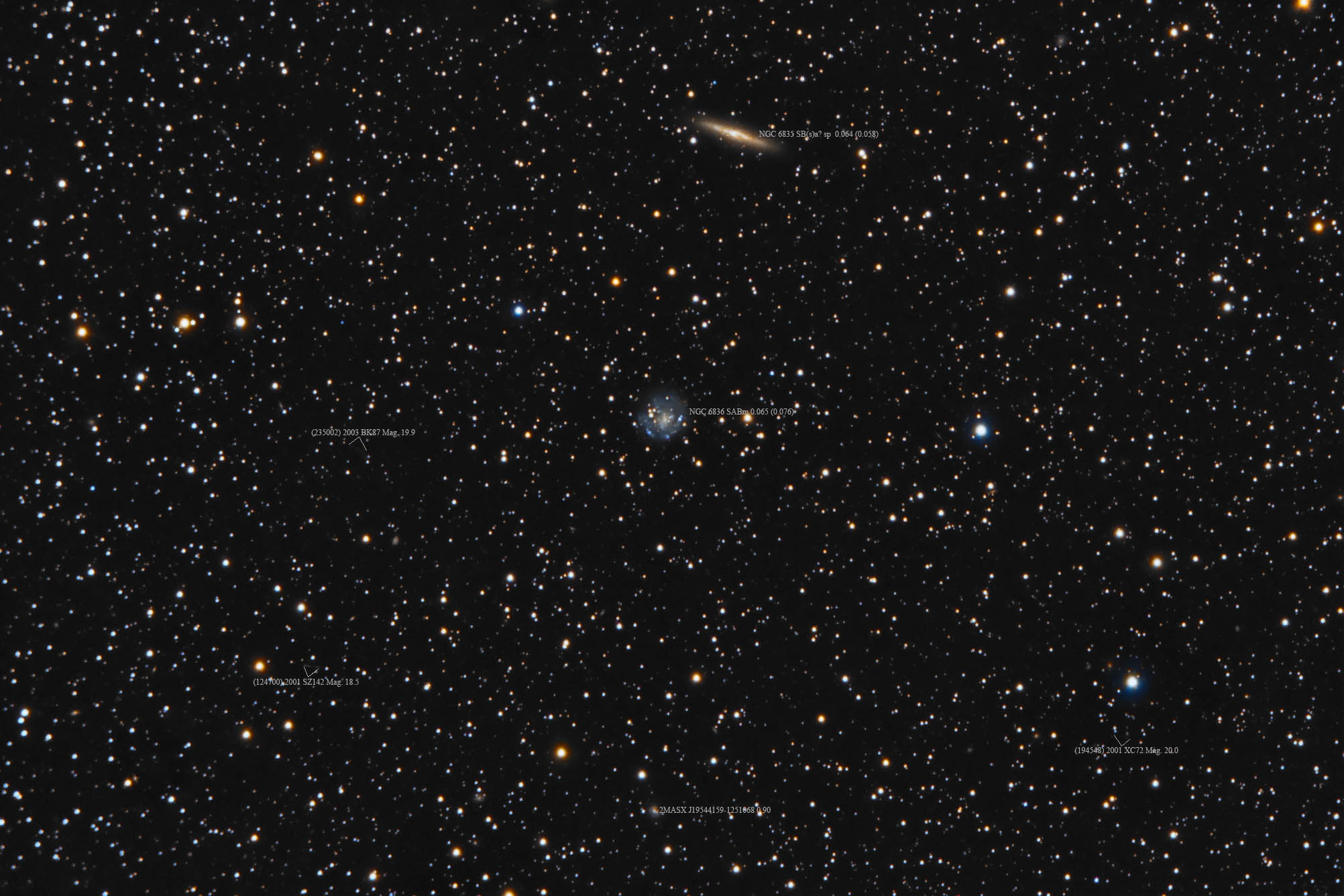