NGC 6939 is a rather well known open cluster in Cepheus near the more famous NGC 6946 galaxy. In small scopes where only the brighter stars are seen they seem to array in rows much like a bank of stadium lights. That effect is totally missing from my image. The WEBDA cluster database puts its distance at about 3850 light-years though I\'ve seen other uncredited estimates of 5800 light-years. Again, astronomy hasn\'t yet found a good way to pin down the distance to most such clusters leading to various estimates depending on methods used and assumptions made about extinction from dust and gas in our galaxy which is also hard to determine.

NGC 6939 was discovered by William Herschel on September 9, 1798. It is in the original H400 observing program. My entry on May 21, 1985 at up to 120x with my 10\" f/5 on a good night reads, \"Medium sized triangular cluster whose brighter stars seem to be arranged in rows both horizontally and vertically sot of like a square grid cut into a triangular shape. Many fainter stars are seen under this grid. My magnitude limit was about 15 this night so it was a grand sight.\" Later another amateur said it reminded him of a bank of stadium lights.

Sometimes you get a surprise in an image. That certainly is the case here. The field is full of dusty nebulosity. If I\'d have known it was there I\'d have put far more time into the image. But it came as a complete surprise when I started to process the image. At the time I processed my image of the galaxy NGC 6946 (Arp 29) I saw some of this nebulosity but thinking it noise processed most of it out. Oops. I need to be more trusting of my data. Still, hints of it can be seen in the image, especially just west (right) of the galaxy and toward the west-southwest of the galaxy in my image.

Apparently, most imaging this cluster have the same problem I did with the galaxy and thought the nebulosity was noise. It is either processed out or not seen in most images I found on the net. Only a couple showed the nebulosity. It apparently is mostly due to fluorescence from UV stars illuminating the carbon compounds in it as well as reflecting light of these very hot blue stars though one image in H alpha light showed a general glow in the area. I found no catalog entry for this nebulosity at Simbad.

If you look closely you will see many faint, small galaxies in the image some well inside the cluster. Only one in the image has a redshift value. Several others are just outside the frame. All are faint smudges and are listed at about the same redshift as NGC 6946. They are likely gravitationally bound to it. The one in my image with redshift data is LEDA 166196. It is at the top at pixel 1001x130. It is hiding behind a very orange star. It is a round reddish ball about 55 seconds of arc (55 pixels) across. A much more obvious galaxy is below it, 2MASX J20313354+6047414. It has no redshift data same as all the others in the image. Only 2 others are identified in the image. I won\'t try to point them out.

I need to redo this field with much more exposure time to better pull the nebulosity out of the sky glow. 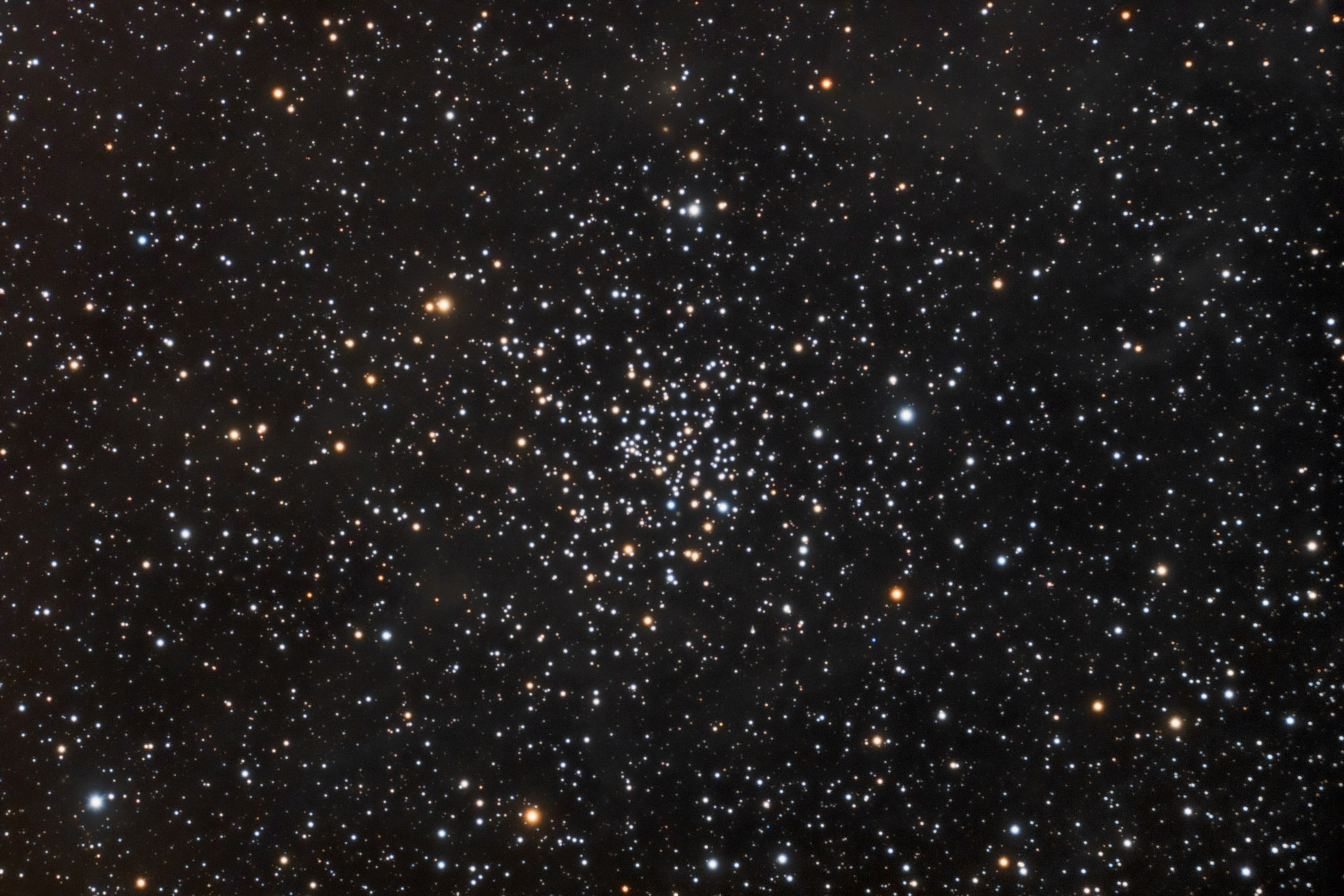