HCG 88 is a 4 galaxy group in Aquarius about 260 million light-years distant. Two dwarf members of the same group are shown in my image but didn\'t meet Hickson\'s magnitude limit for inclusion being too faint. An interesting paper on this group that is surprisingly readable is at https://arxiv.org/pdf/1509.06303.pdf .

The paper shows how Hickson 88A has a plume to the northwest indicating interaction in the past. It also shows that 88B has a shell structure indicative of it devouring a galaxy in the past. It also mentions how a typical image of 88C show it to have two arms but with special high dynamic processing a third arm becomes visible. Apparently, I do such processing as the arm is very obvious in my image. Not having an H alpha filter with a frequency to match this groups Dopler shift I couldn\'t do the H alpha image they did showing interesting pockets of star formation in these otherwise rather red and dead looking galaxies. It also notes that 88D, while classified as Sc shows two bright blobs on either side of the core that may be star forming regions at the ends of a bar so it could be a barred spiral. Maybe, I\'m not convinced as I\'d expect them to be symmetrical about the core but in my image, that doesn\'t seem quite the case.

The three NGC galaxies in HCG 88 were discovered by Albert Marth, NGC 6976 on July 12, 1864 and the other two a year earlier on July 20, 1863. However the galaxy NGC 6976 was independently seen by Guillaume Bigourdan 22 years later by Guillaume Bigourdan. Both he and Marth got the coordinates somewhat wrong and different such that Dreyer gave it the entry NGC 6975. Later he discovered the error and equated the two but kept the two entries resulting in today\'s confusion.

There were a ton of UvES objects in the field. This is NED\'s label for candidate quasars that lack spectroscopic redshift data and possibly other spectroscopic data needed to confirm they are true quasars. They also have a classification of Candidate Quasar for similar objects. My experience shows the latter, when fully studied are usually rejected as being quasars while the UvES ones rarely are rejected. So I included all UvES labeled candidates but not the others as the image was already very crowded.

NED has a couple galaxies with contradictory classifications. These two are labeled as being Candidate Dwarf galaxies yet their size in NED, as well as distance, make both much larger than our own galaxy. They are ASK 120385.0 and ASK 120178.0. The contradiction is even stronger with the latter which it also lists as a BrClG for Bright Cluster Galaxy and uses its position for a galaxy cluster 2.3 billion light-years away. Interesting a dwarf galaxy would be the brightest and largest galaxy in a cluster. I suspect the classification is from years ago before distance was known and these were thought to be members of the same group as Hickson 88. Somehow when new data shows this not the case, the classification never was removed.

Several galaxies in the annotated image are from the HCG 088:[dRC97] catalog as they appeared in no other at NED. NED gave them an error circle of a radius of 0.5 arcseconds, the best it usually gives. Yet none fit within this radius, usually be about 3 arc seconds from the stated position. This means my identification of these may be wrong. I picked the object closest to the position with a PSF proper for a distant galaxy and a magnitude similar to that stated in NED. Still a couple of times it was a very close call so I may have picked the wrong object. One had two listings one with just this catalog and another a couple seconds of arc away that listed several catalogs. When that happened I went with the multiple catalog entry as its position was within the error radius eliminating any question of identity and it was the one I had picked from the first entry.

The very bright (5th magnitude) B9III star, 5 Aquarii is just out of the frame to the north. It cast a bright blue halo over the upper part of the image and ghostly apparitions throughout the image. I had a heck of a time reducing these, some successfully others only partly so. One, unfortunately, overlayed HCG 88B. The part of its outer halo that extends to the Candidate Dwarf that\'s really far beyond the group. Removing it also removed the full extent of this halo toward this distant background galaxy that likely led to it being considered a possible dwarf member of the group. It can be seen in the image with the paper. I thought I\'d moved it far enough out of the frame but that wasn\'t the case. The F5IV, 6th magnitude 4 Aquarii fully on frame wasn\'t blue enough to be a serious problem. Something about my corrector and very blue bright stars don\'t get along. O through early A bright stars are a problem for some reason. 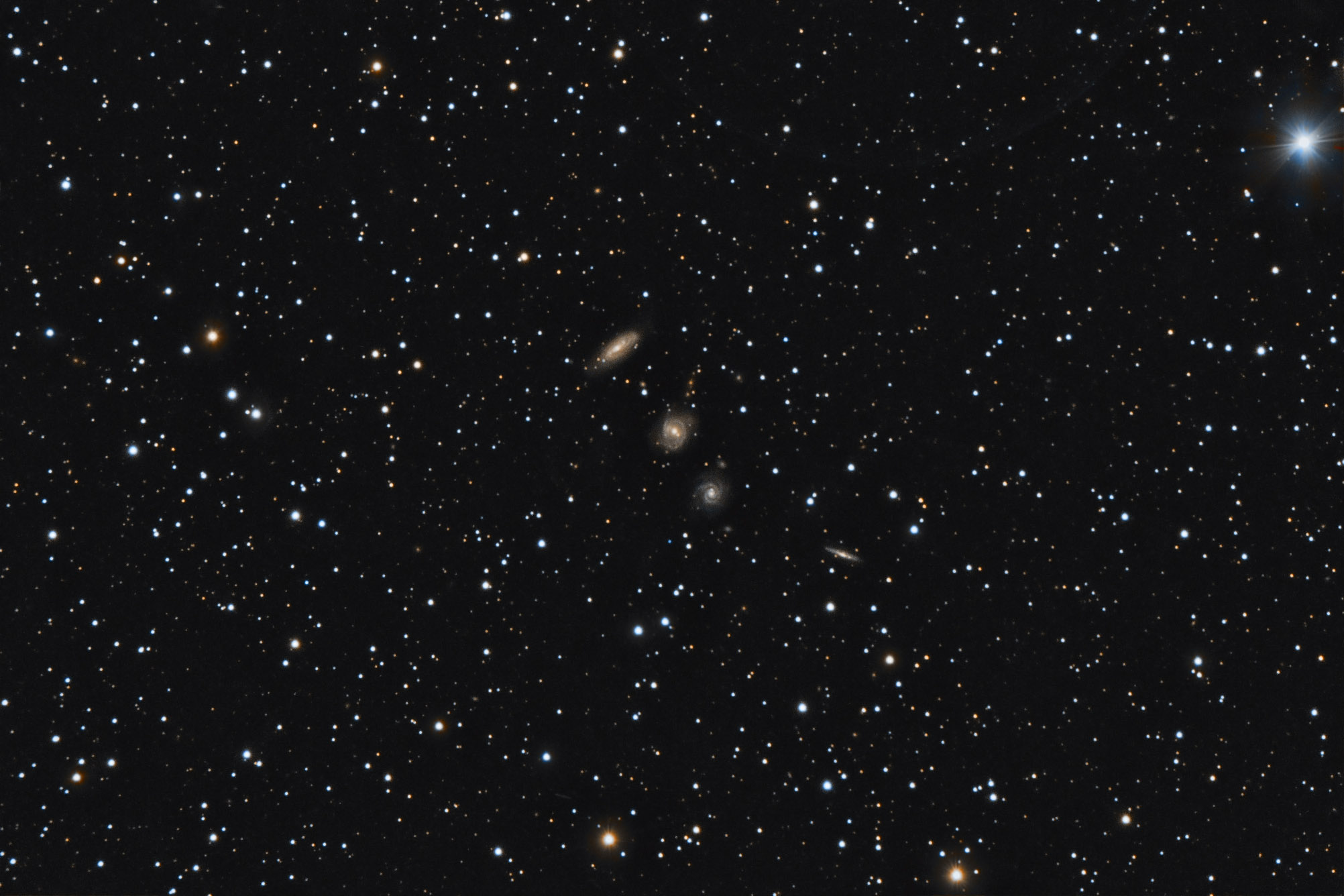 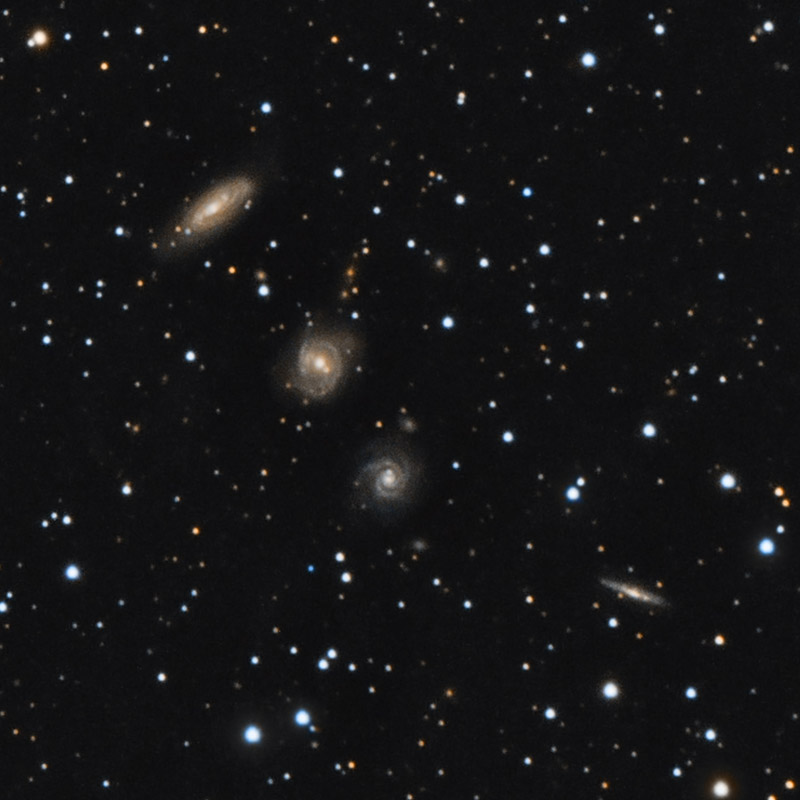 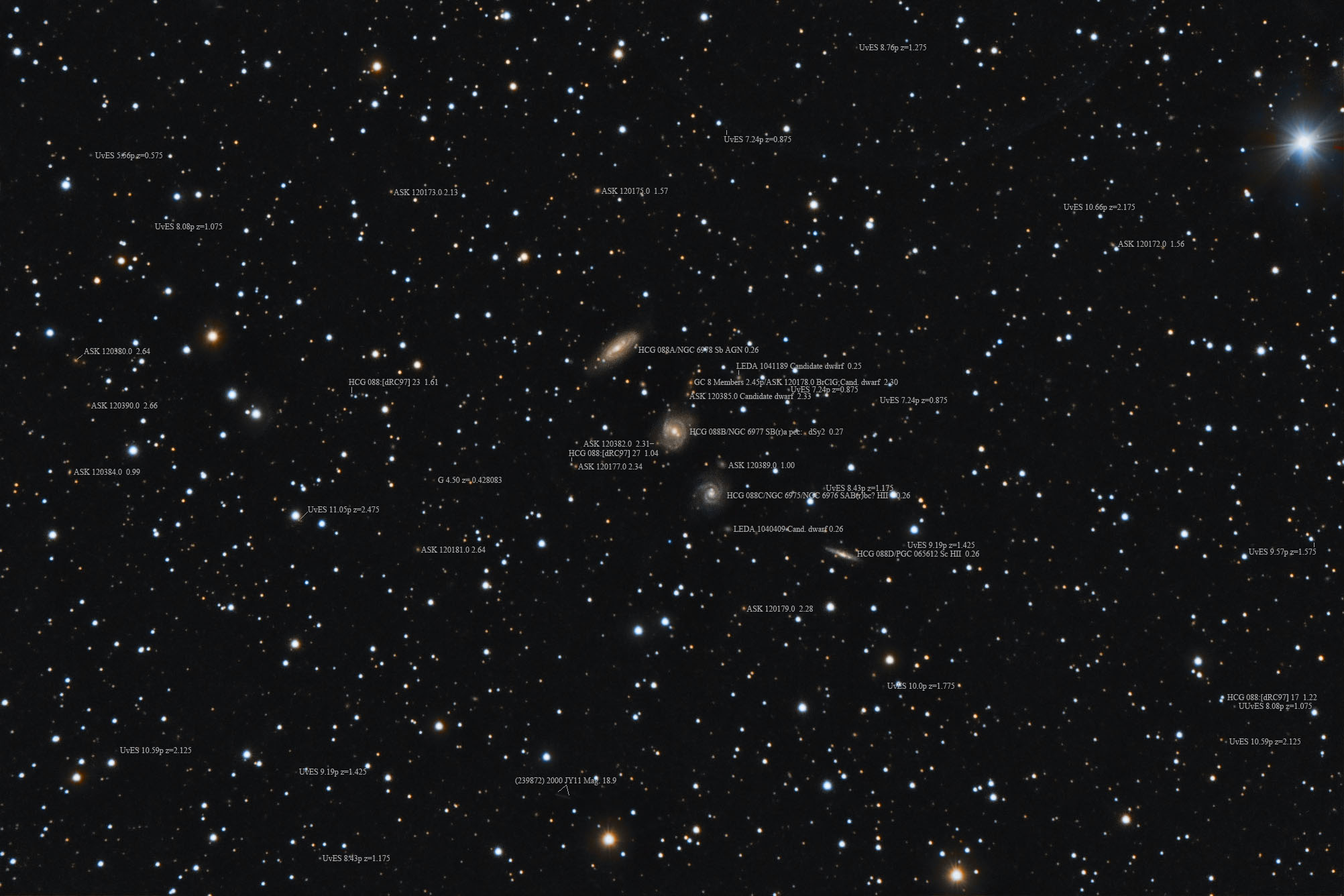