Hickson 88 consists of only 4 galaxies at a distance of about 260 million light-years. All four are spirals with three nearly face on. All are of unusually low contrast making details rather indistinct. It didn\'t help that there was a weak aurora this night and even though it the field is low in the southern sky it was still a 6 times brighter sky than I normally have. From left to right (top to bottom) they are NGC 6978, NGC 6977, NGC 6976 and 2MFGC 15807. The latter being a flat galaxy per the 2 micron survey rules. That gave me two reasons to image this group, its a Hickson Compact Group and there\'s a flat galaxy in the image. This group is in northwestern Aquarius.

NGC 6976 is classed as SAB(r)bc? with HII emission by NED while the NGC Project says Sbc in its simpler system. It has a dual entry in the NGC catalog also listed as NGC 6975. It was \"discovered\" twice. First by Albert Marth in 1864 then by Guillaume Bigourdan in 1886 who later realized he made a positional error and was off by 180 degrees. Both \"findings\" made it into the NGC catalog. I used the 6976 name since it came first. It is also HCG 88C using Hickson\'s numbering scheme.

The fourth member of HCG 88 is HCG 88D or more commonly MCG -01-53-14 and is classed simply as S? by NED. It\'s the only one of the 4 that doesn\'t seem disturbed. The three NGC galaxies all show signs of being stirred up by interaction with each other.

The field has set a record for me for quasar candidates with 16 of them in the field and several more just outside it. None, however, have been confirmed spectroscopically, at least as far as I can tell from their NED listings. All are based on photographic red-shift measurements. In a few cases, the Sloan survey says they are only stars. Arp always considered quasars as nearby objects with their redshift being due to other factors than distance. He considered them as being emitted by active galaxies. He loved to point out active galaxies with lots of quasars (4 or 5 was \"a lot\") as proof of his ideas. He tended to ignore active galaxies without them saying they just hadn\'t emitted them yet. Everyone else sees this as just random distribution. I wonder if he knew of this field? Seems to be just what he\'d want. Three active galaxies with 5+ quasars apiece. Now that he is gone maybe his idea will finally fade away as well. It might have seemed somewhat plausible 40+ years ago but not today. A couple of the quasar candidates are so close to other stars you will need to double or triple the size of the image (unless your monitor has unusually large pixels) to separate them from the star. A line has been drawn to the quasar candidate in these cases. UvES stands for Ultraviolet Excess Source for those new to my annotations. Such objects, when starlike usually prove to be quasars. 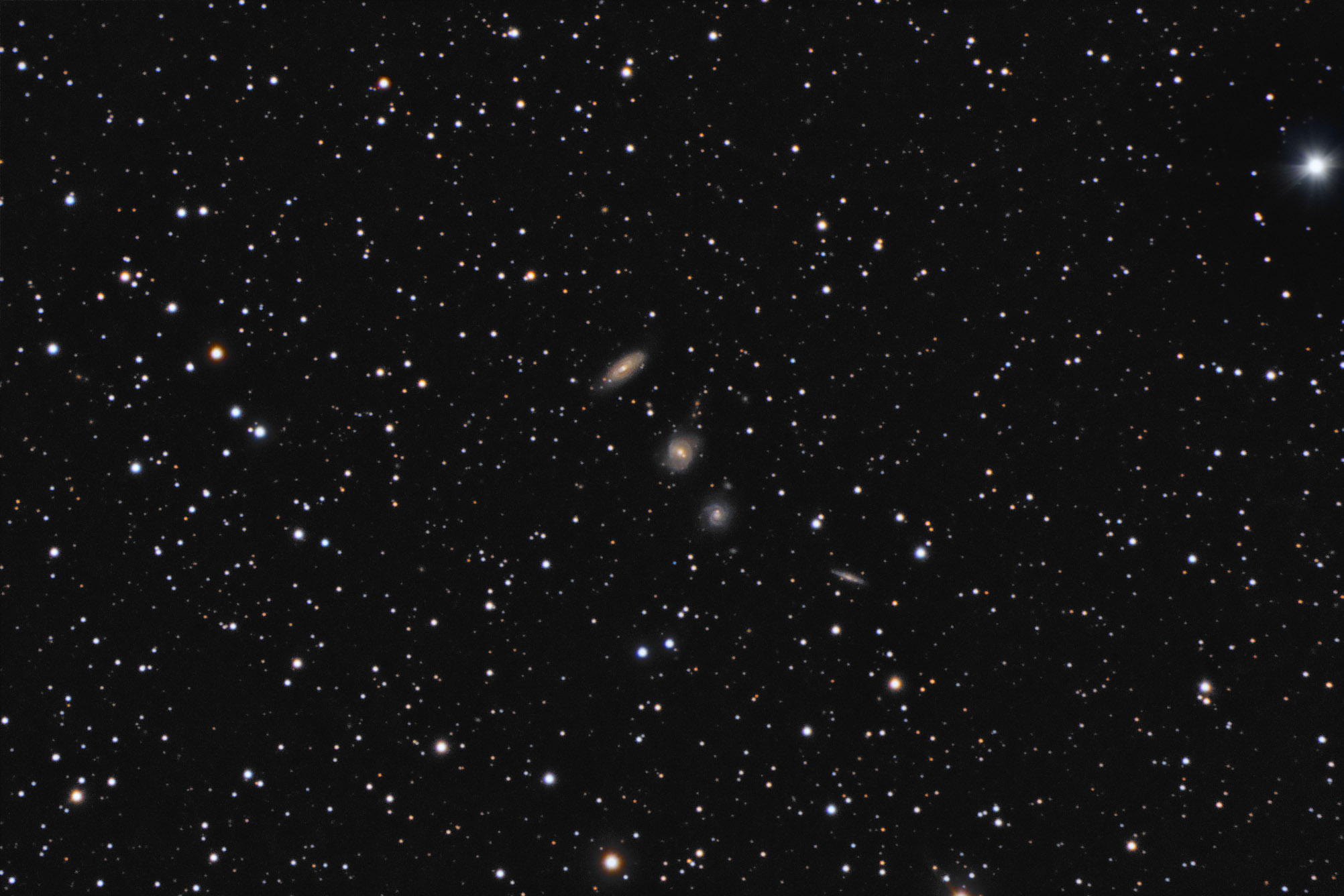 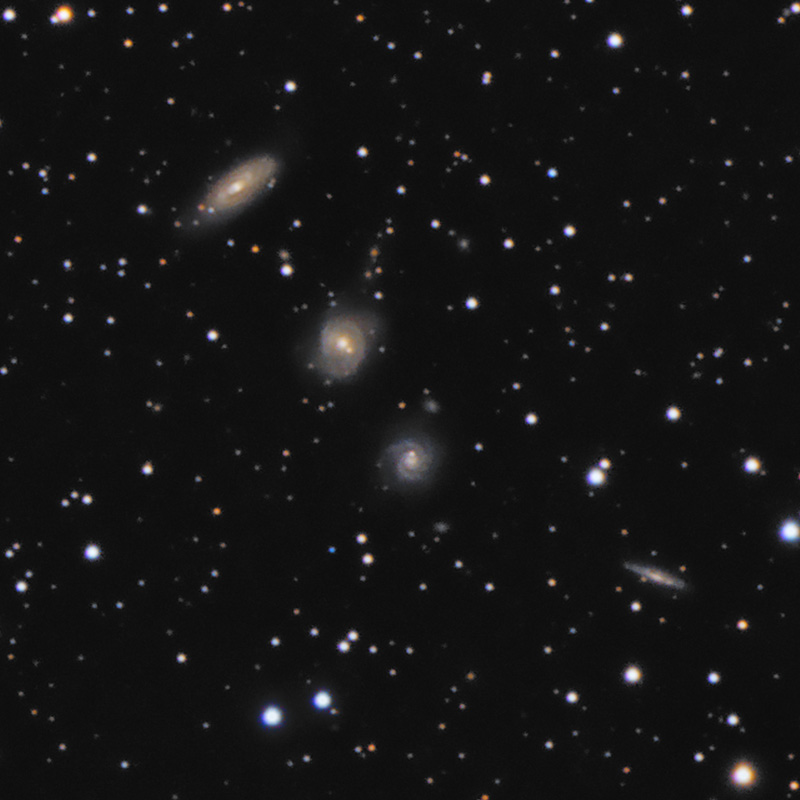 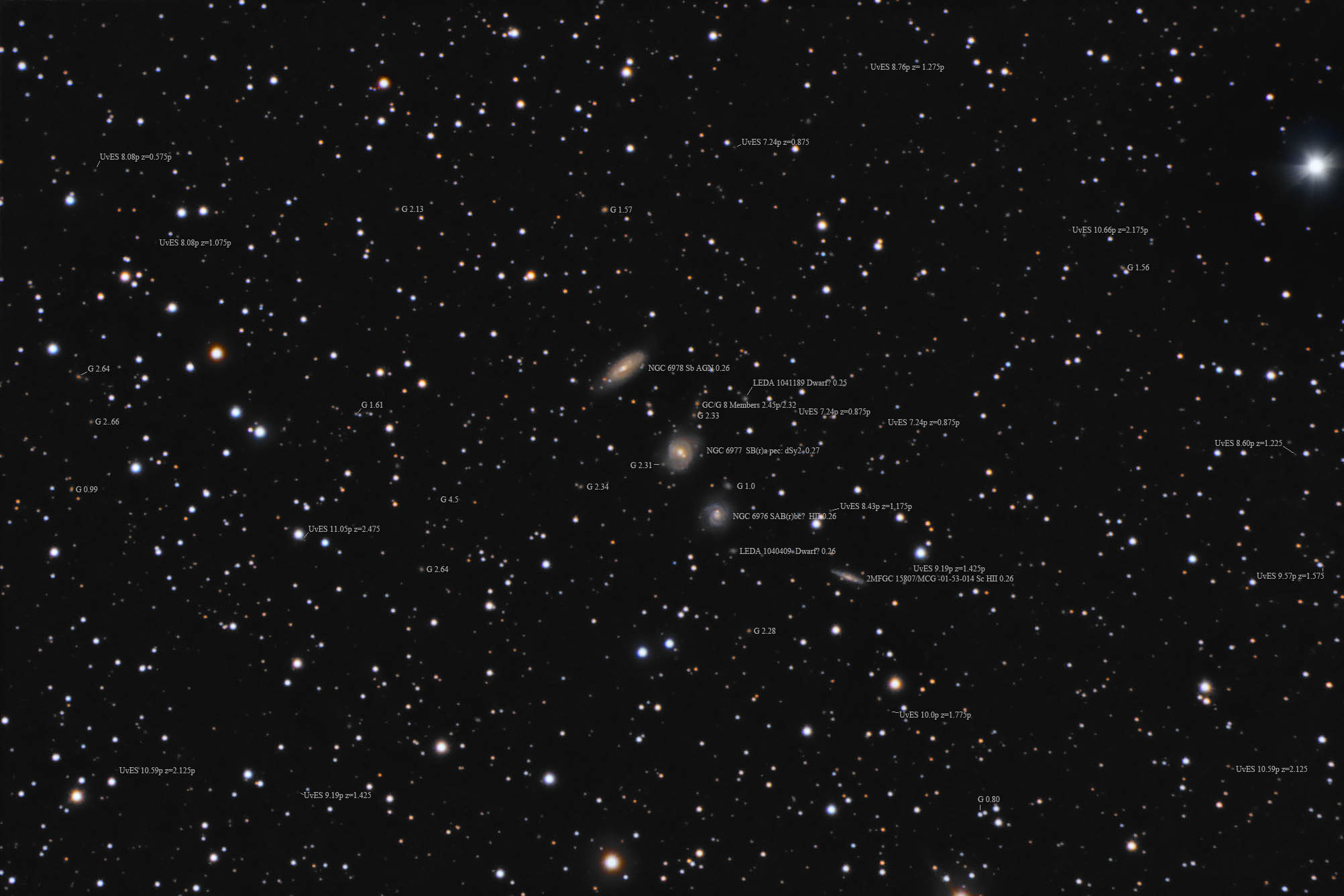