NGC 7128 is an open cluster in the constellation of Cygnus. It is one of the prettier clusters in the original Herschel 400 list. The distance to it has usually been put at about 7500 light years but I found a well-researched paper indicating it is more like 13000 light years away give or take 10%. This puts it on the edge of the Perseus arm of our galaxy rather than between arms. Since it is a rather young cluster, something over 10 million years old, it wouldn\'t have had time to move out of an arm as the old distance estimates said. Another reason I like this new distance estimate.

I was drawn to this cluster by Dreyer\'s description which mentioned that it contained a ruby star. Always liking carbon stars and other very red stars I had to view it at the first opportunity. When I did I found it contained two bright orange stars and a third fainter one but I never did see the ruby star Dreyer mentions. Still, it is a great cluster visually due to the color contrast of those giant K stars standing in contrast to the blue A and B stars it contains.

It was discovered by William Herschel on October 14. 1787. My entry from the original H400 program using my 10\" f/5 at up to 100x on a fair-but humid night on June 14, 1985 reads: \"Small, round cluster circled three-quarters of the way around by bright stars. How could it be called \"sparse\" when it is such a small tight cluster. It\'s not condensed but isn\'t sparse!\" By now if you\'ve been reading through my site you are seeing a lot of May 1985 and later entries all saying humid. This is because I was working from my old cabin on the lake. I had to set up right along the shore. Down there it is always very humid. My observatory is on a very different part of the lake, atop a hill with the telescope over 60 feet above the lake and about 130 feet back from it. While it can be humid here as well It doesn\'t have the water vapor that rises from the lake giving near 100% humidity and ground fog. I\'m now usually above that now.

Clusters need the very best nights for seeing as otherwise the stars just look lousy. I hate to \"waste\" a good night of seeing on just stars but when it\'s one of your favorite visual clusters you do so. Though I cheated and only used one 10 minute shot for each color channel. When there are no faint fuzzies you can get away with that. Oddly when I put it together the color was so strong I had to turn it down. Usually, I have to boost the color, especially of clusters. Not this time. I don\'t know why this turned out so differently as I didn\'t process it any differently.

Sorry, no faint fuzzies in the background. Just too much dust and gas in ours to let me see anything beyond. The image was taken September 17, 2009. I\'m not gaining on my backlog. 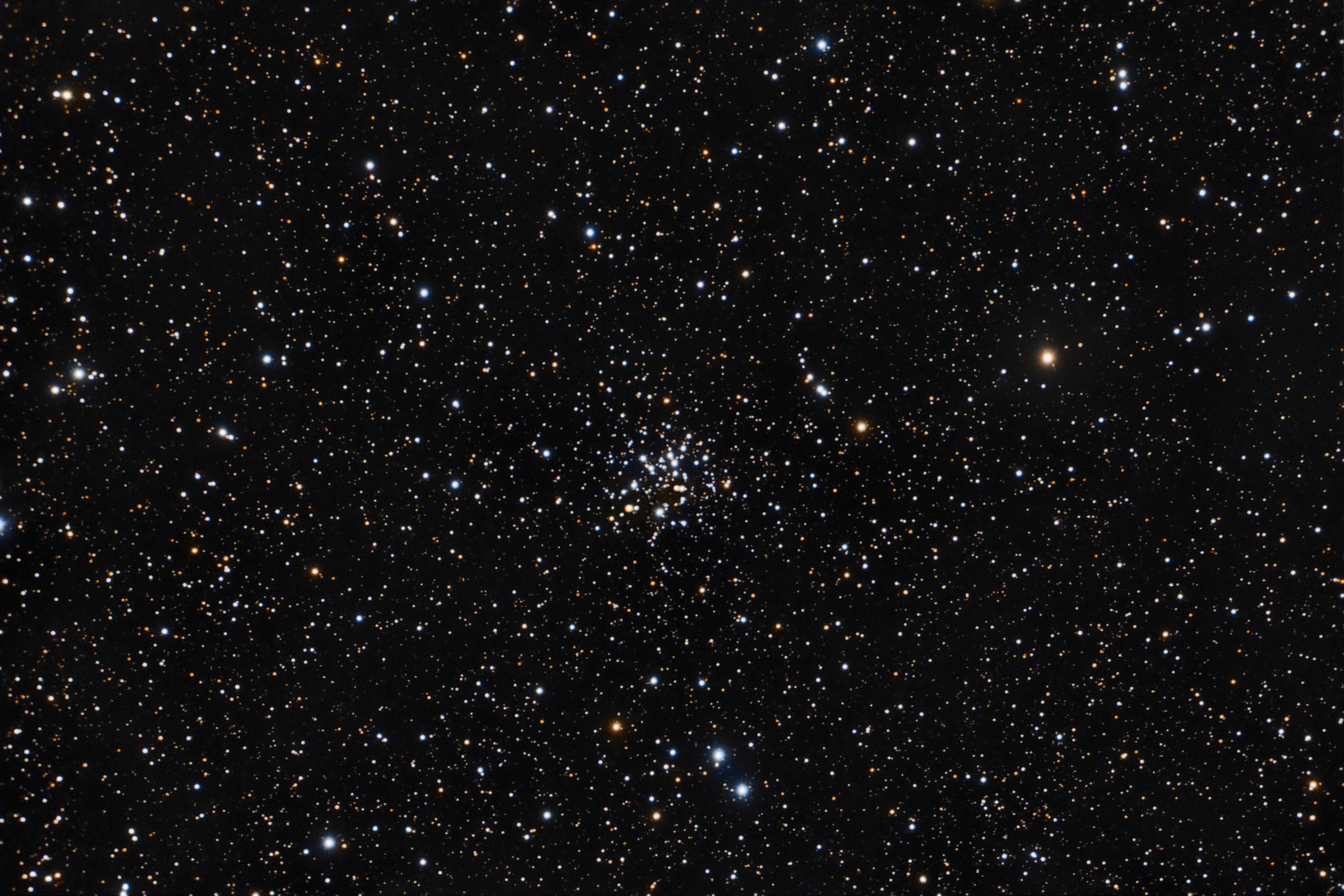