NGC 7146 and 7147 are the largest of the three galaxies in the WBL 672 galaxy group about 400 million light-years from us in southwestern Pegasus. Both appear to be red and dead spirals. Spirals that aren\'t making new stars in any significant amounts so all the hot blue stars that normally define spiral arms are long gone. Both are barred galaxies. Both were discovered on August 11, 1863 by Albert Marth being number 456 and 457 in his list.

The only blue galaxy in the group is CGCG 376-046. NED doesn\'t classify it, not even as a spiral which it obviously is. More confusing is that it is listed as a double galaxy. The brighter component is located about one galaxy diameter west of the blue galaxy. There\'s nothing at that location. The blue spiral they call CGCG 376-046 NED01 (I left the NED01 part off of the annotated image). The redshift for the missing galaxy gives a distance of 380 million light-years while the distance for the blue galaxy is listed at 280 million light-years. But then it notes another measurement that puts it about 380 million light-years. So that\'s what I used for the annotated image as most seem to include it as part of the group anchored by NGC 7146 and 7147. Also, the position of the missing galaxy is given with an error bar of 150\" radius or anywhere in a 5 minute diameter circle centered on the position. I\'m totally confused by what or where this galaxy is unless it is NGC 7147.

This area of the sky is poorly studied for galaxies. These are the only ones in my image with redshift data. Since there is a short asteroid trail near the top of the image I did prepare an annotated image (see it for details on the asteroid) and gave designations for the few in the image that had designations that weren\'t just positional. There weren\'t many of those either.

This was taken on the best of several poor nights I attempted it so doesn\'t begin to go as deep as I\'d wanted to go. In fact, I marked all of them as unprocessable but decided this one night\'s attempt was worth trying to salvage. I think NGC 7147 may have some faint halo stars well beyond the edge as defined by my image as I see hints of it in the FITS but it was so in the noise I didn\'t try to pull it out. This shows better when I combined all nights but seeing was so bad for all but this night it may just be an artifact of the seeing. The best seeing frames I left in the image shows a diameter of just over 100,000 light-years using the 380 million light-year distance. NGC 7146 is slightly larger at 110,000 light-years. The blue spiral is 64,000 light-years across if the same distance but if it is really 280 million light-years away then it is only 47,000 light-years in size. 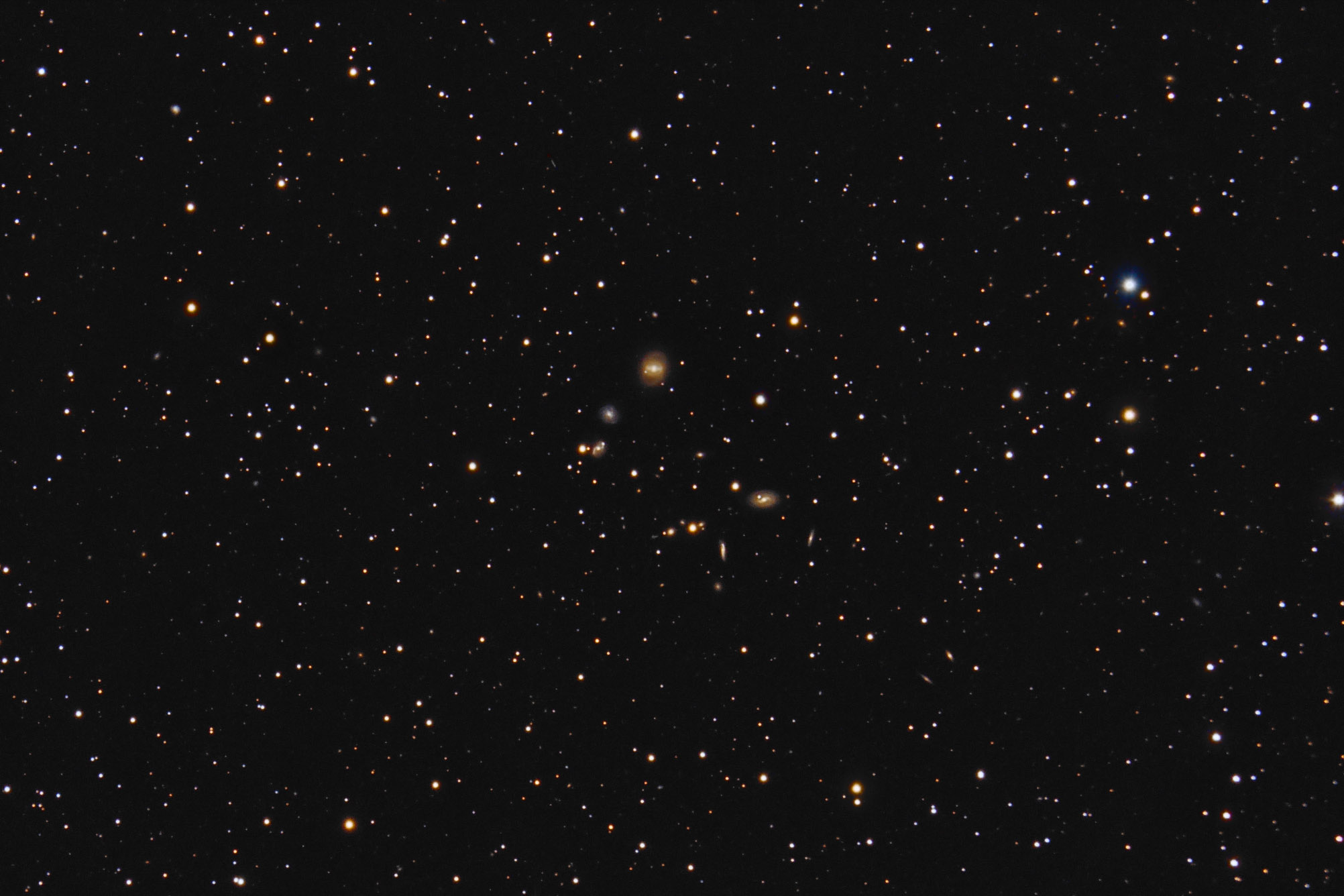 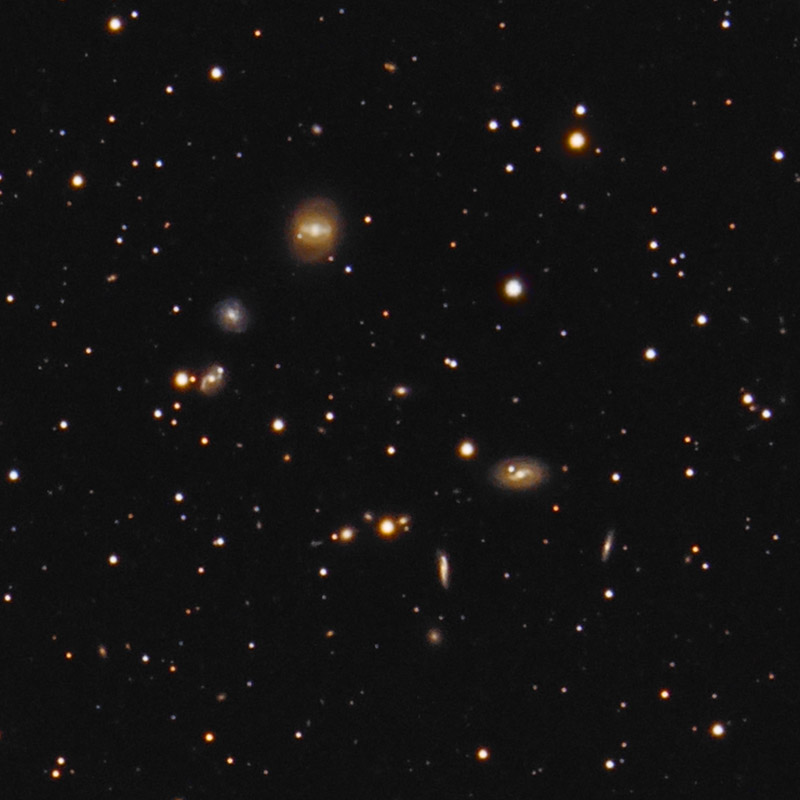 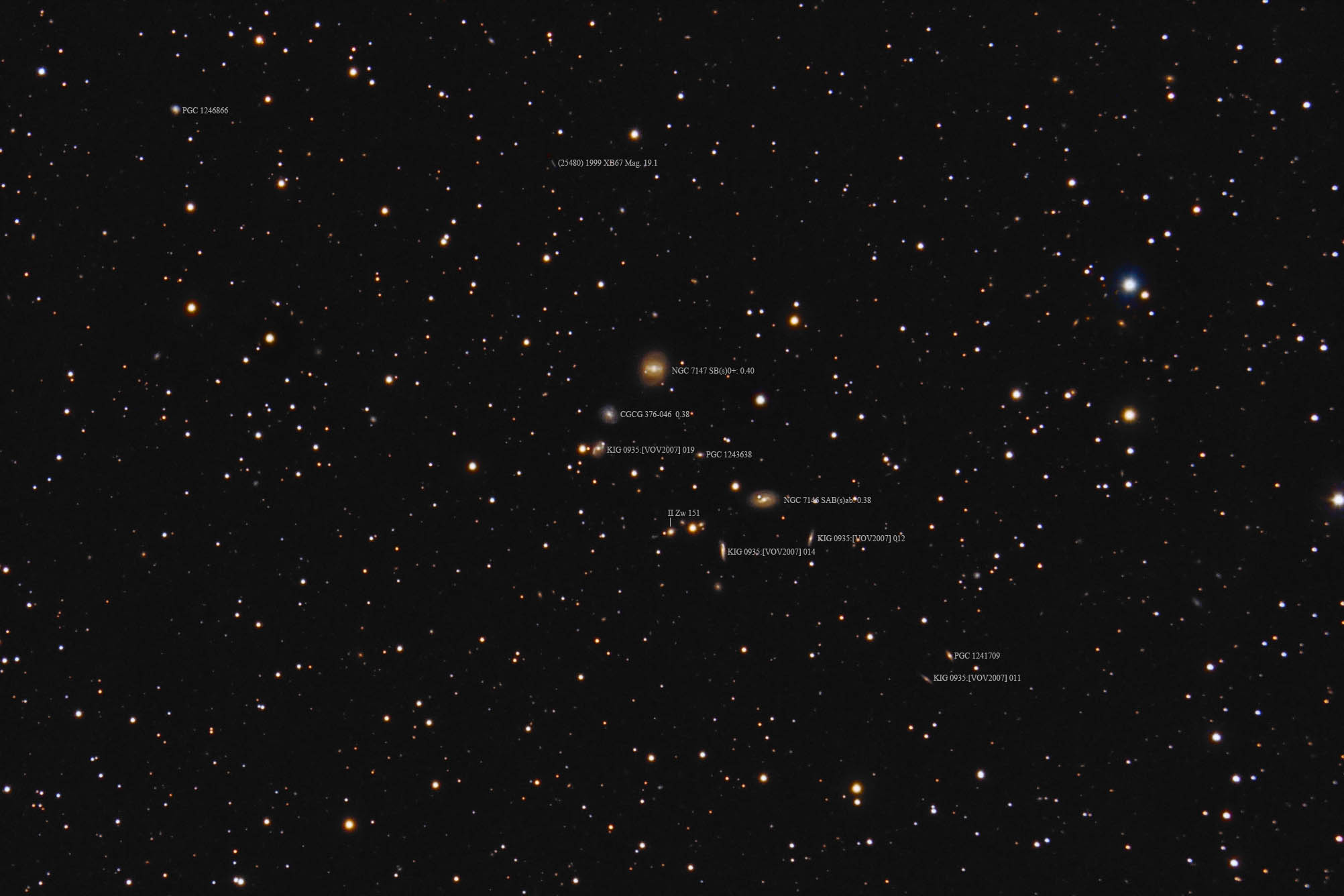