NGC 7183 is a peculiar red galaxy in southwestern Aquarius about 110 million light-years distant. It is well below my normal imaging area where seeing is poor and atmospheric dispersion a major issue. I had to try for it when I had a better than usual night (well what passes for usual this year). The dust lanes are what interested me especially the one coming in diagonally from the lower right side that obviously doesn\'t follow a spiral pattern. Actually, none of them do. Also, it is very asymmetric with a faint extended region to the southwest. Thanks to faint plume-like extensions I measure its size at about 150,000 light-years. That\'s one big galaxy. With nothing else in the field at its distance, I\'m going to assume its distortion and odd dust is due to a rather significant galaxy it merged with in the not too distant past. I suspect with better resolution a lot of fine dust structure would be seen. It was discovered by William Herschel on September 23, 1786. It didn\'t make either of the Herschel 400 observing programs.

NED classifies it as S0+ pec. The plus sign indicating it has some characteristics of a Sa or SBa galaxy. That likely refers to the very vivid dust lanes. So vivid I was surprised it was listed as an S0 galaxy. Seligman apparently agrees classifying it as Sa pec? The NGC Project agrees saying Sa: but without the pec label. So much for the \"exact\" science of galaxy classification. The core of the galaxy is so bright The Sky plots it as a star. Most sources consider the galaxy as disturbed and list it has having 4 companions to the north and 1 to the south. I see 6 to the north and several more to the south. Only two have redshift data. That shows they aren\'t companions at all as they are some 4 times more distant at nearly a half billion light-years. The northern galaxy has two others, not listed at NED as galaxies in its spiral disk. Are they just background galaxies or members of the same system. Another pair of galaxies without redshift information lie closer to NGC 7183. I assume these two plus the two LEDA galaxies are the 4 others mention as companions. The southern \"companion\" is likely MRSS 601-107599 which also has no redshift data. Many others without redshift data are in the area and noted in the annotated image, including one seen through the southwest end of the galaxy as a faint blob. Is it a star cloud in the galaxy or really a distant galaxy?

Due to being so low dispersion elongated stars in the luminance frames. The color frames showed much less elongation due to covering a much smaller spectral range. This is why using RGB only is better when this low. But I have only a one hour window this low. It takes me two nights just to do the LRGB if everything goes perfectly. I\'d need 4 or more to do it pure RGB so put up with wonky looking stars. Another issue working this low is the image is severely reddened. The only color image I found of it is at Seligman\'s sight made from the red and blue POSS plates. It shows the galaxy very blue. Even after correcting for the normal loss of blue at this altitude and adding in another 15% for good measure I get a very red galaxy. If I\'d add enough blue to match Seligman\'s image everything would be blue. While no Sloan data for this field exists there is some NOMAD data which I used. Also, there\'s a quasar at 7.96 billion light-years with spectral data. I used these to try and correct for the blue loss. As mentioned that still didn\'t seem enough so added an additional 15% \"to taste\" as Robert Gendler calls it. Sill the galaxy is very red. Since everything else looks reasonable I\'m going with this color balance.

The annotated image shows what NED calls a quasar group LQG 11 which they list as having 11 members. One quasar is at the position of the group. Where the other rest are I have no idea. There are 4 galaxies in the image with a redshift that puts them 480 million light-years away and three others at 1.71 billion light-years. These appear to be two related groups. 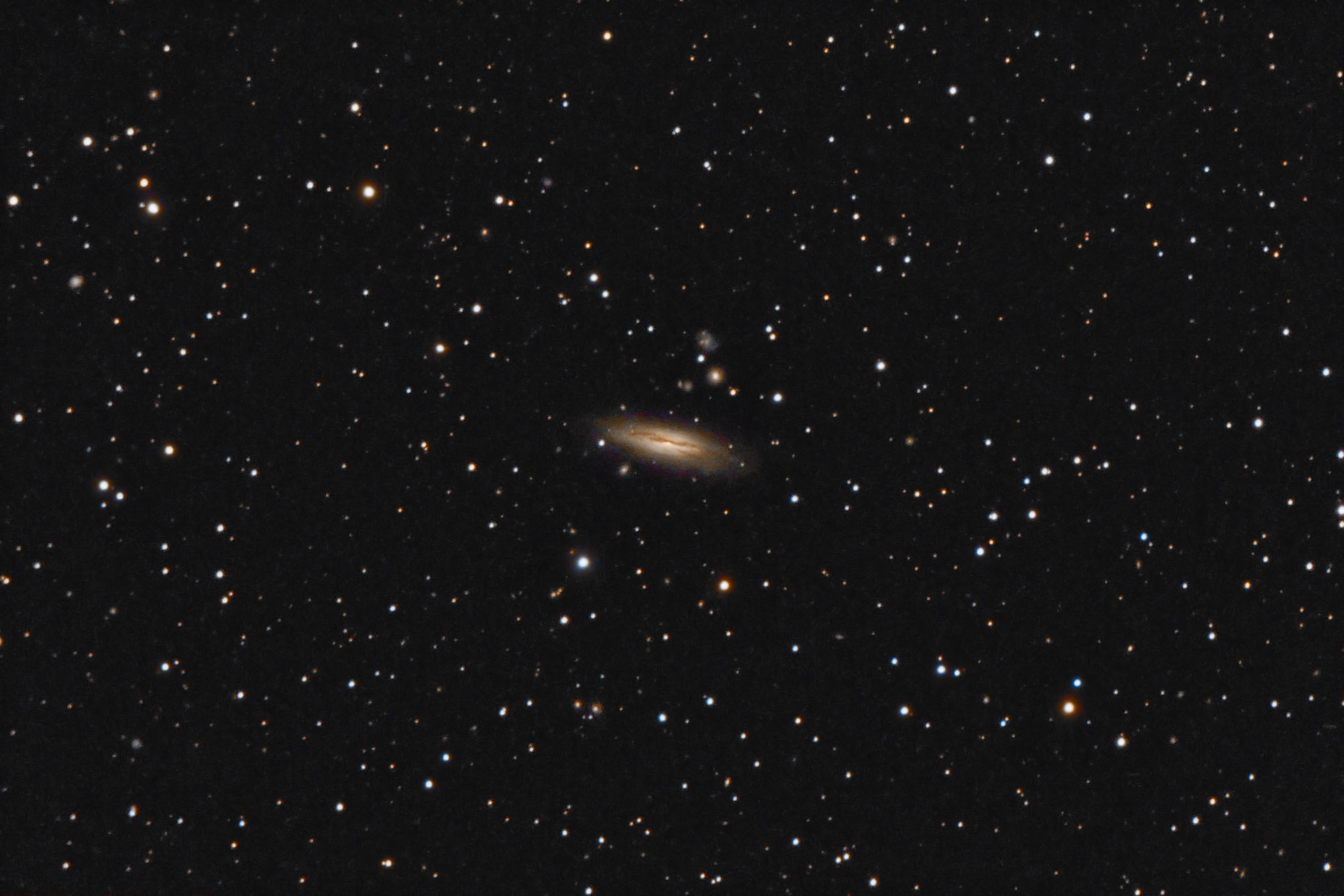 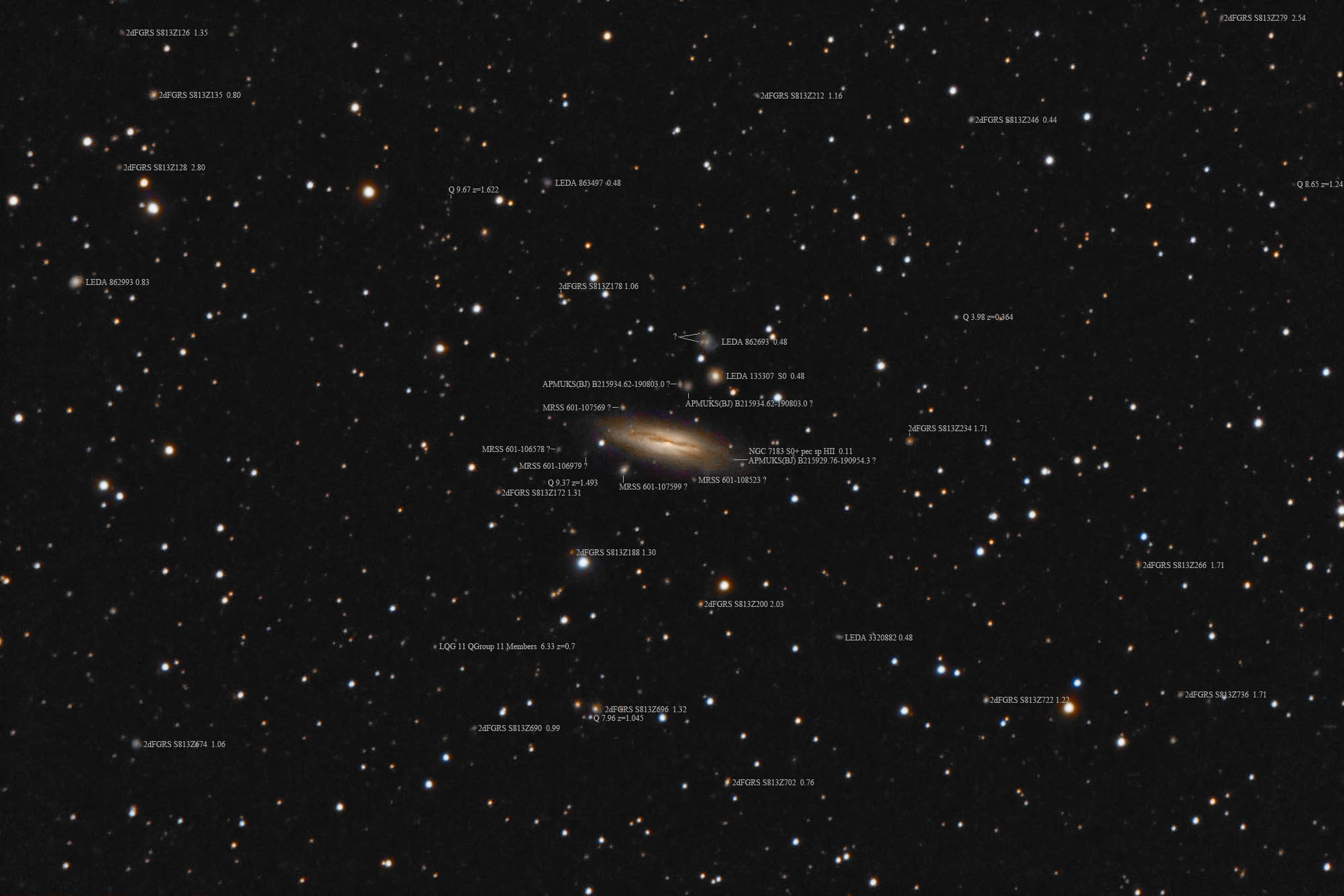