NGC 7184 is a great spiral galaxy in southern Aquarius that is listed as a barred ring galaxy with a Low Luminosity Active Galactic Nucleus about 110 million light-years from us. It is also a huge spiral. I measure it at 200,000 light-years across.

It was discovered by William Herschel on October 28, 1783 and is in the second Herschel 400 observing program. The other major galaxy in the image is NGC 7180. It too is an LLAGN galaxy but is classified as S0 and is much closer at about 43 million light-years by redshift and 60 by non-redshift measurements. Its size is 20,000 to 30,000 light-years across depending on which distance you use. It too was discovered by William Herschel but on September 11, 1787, nearly three years after he found NGC 7184. There\'s some disagreement here however with some saying William never saw it and giving credit to his son John for finding it September 23, 1830. It\'s not in either of the H400 programs.

They are also the most southern galaxies I\'ve been able to image with some clarity at almost -21 degrees. My usual cutoff is -15 degrees and that suffers quite a bit most nights. My skies this low are limited due to the wall of my observatory and trees I can\'t prune in any way even though I own them as they are in the shore impact zone. Also, my seeing this low is usually awful as fog rising from the lake greatly limits transparency and sucks all blue light from any but the brightest objects.

I lucked out in that this was a night of the best seeing this low I\'ve had in the 12 years I\'ve been observing here. Also, transparency wasn\'t as bad as usual but it still sucked out much of the blue light of dimmer objects. So much so fainter objects had no blue at all. If I could have had more time for color data it would have helped but I get only 100 minutes between trees without it being too low. My Meridian Tree prevents imaging an hour and a half either side of the meridian forcing low objects to be even lower.

While I had a heck of a time with color balance as blue was lost totally in fainter things, unusually weak in medium bright objects and only slightly bothered in bright objects. This meant I had to scale the color adjustment to take this into account. Even eXcalibrator had issues I\'ve never seen before. So while I\'ve said before \"the color is suspect\" I really mean it this time. I found only a few color images of either NGC galaxy in the image and none came close the same color balance. Especially for NGC 7180. All showed it either blue, yellow-white or somewhat orange. None showed the golden core and blue outer regions I ended up with but since color correction was applied by magnitude that may have had severe consequences. Those with -20 degrees objects high overhead instead of along the horizon as it is here may get reasonable results.

For all the color issues I was surprised it went as deep as it did. To the southwest of NGC 7180 is a galaxy that\'s 4.7 billion light-years distant and magnitude 21.9. Some nights reaching that high overhead is a challenge in 40 minutes of luminance data let alone only about 15 degrees over the lake thanks to my being unable to catch it near the meridian.

Why nearly all the galaxies NED had redshift data on were west of NGC 7184 I can\'t explain. I see as many to the east. Some survey may have ended at its right ascension I suppose. It is in the Zone of Avoidance so the Sloan Survey hasn\'t taken this part of the sky.

One asteroid is obvious near the right edge of the frame. Several others are in the frame but too faint for conditions. I can\'t even see them on the FITS stack. 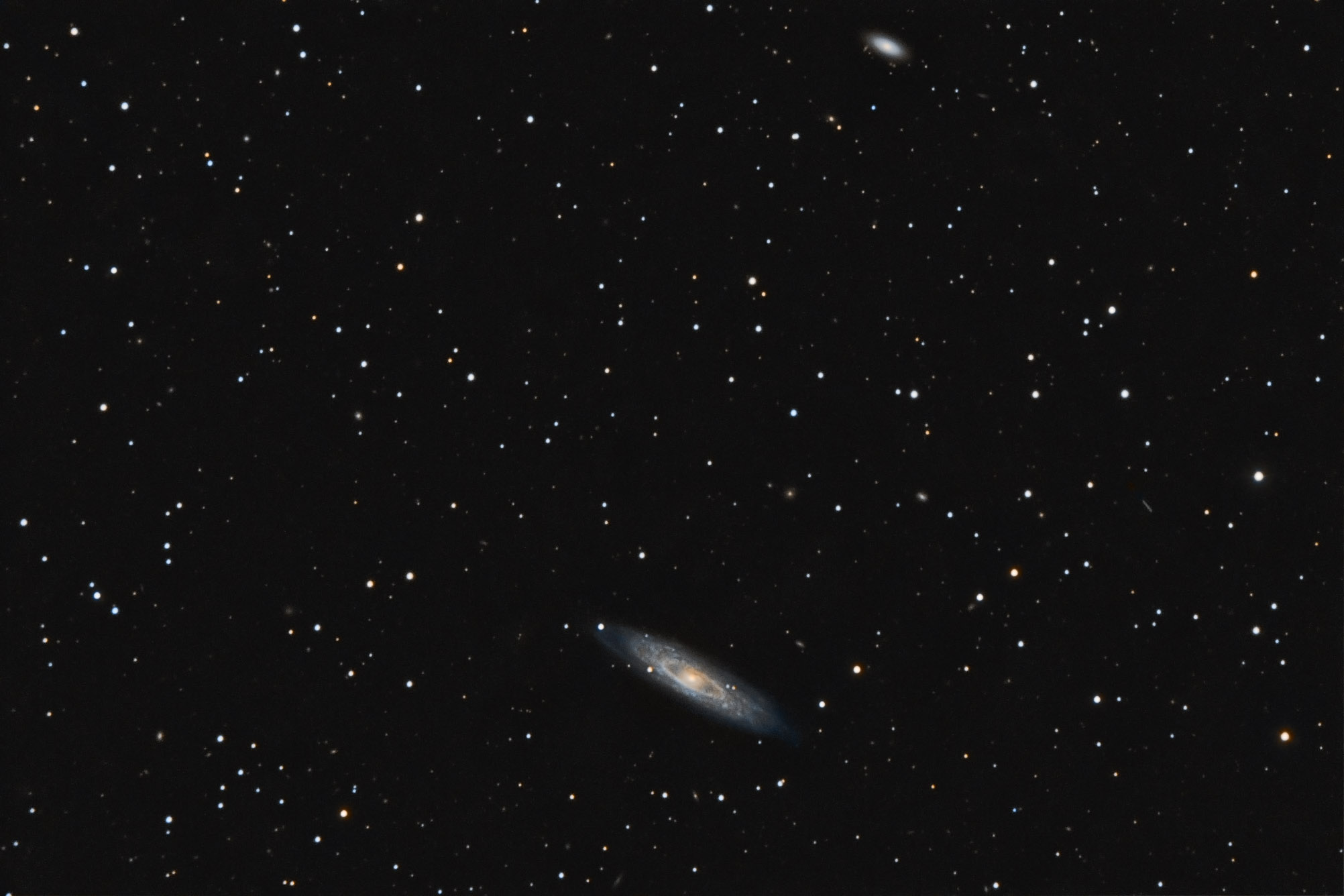 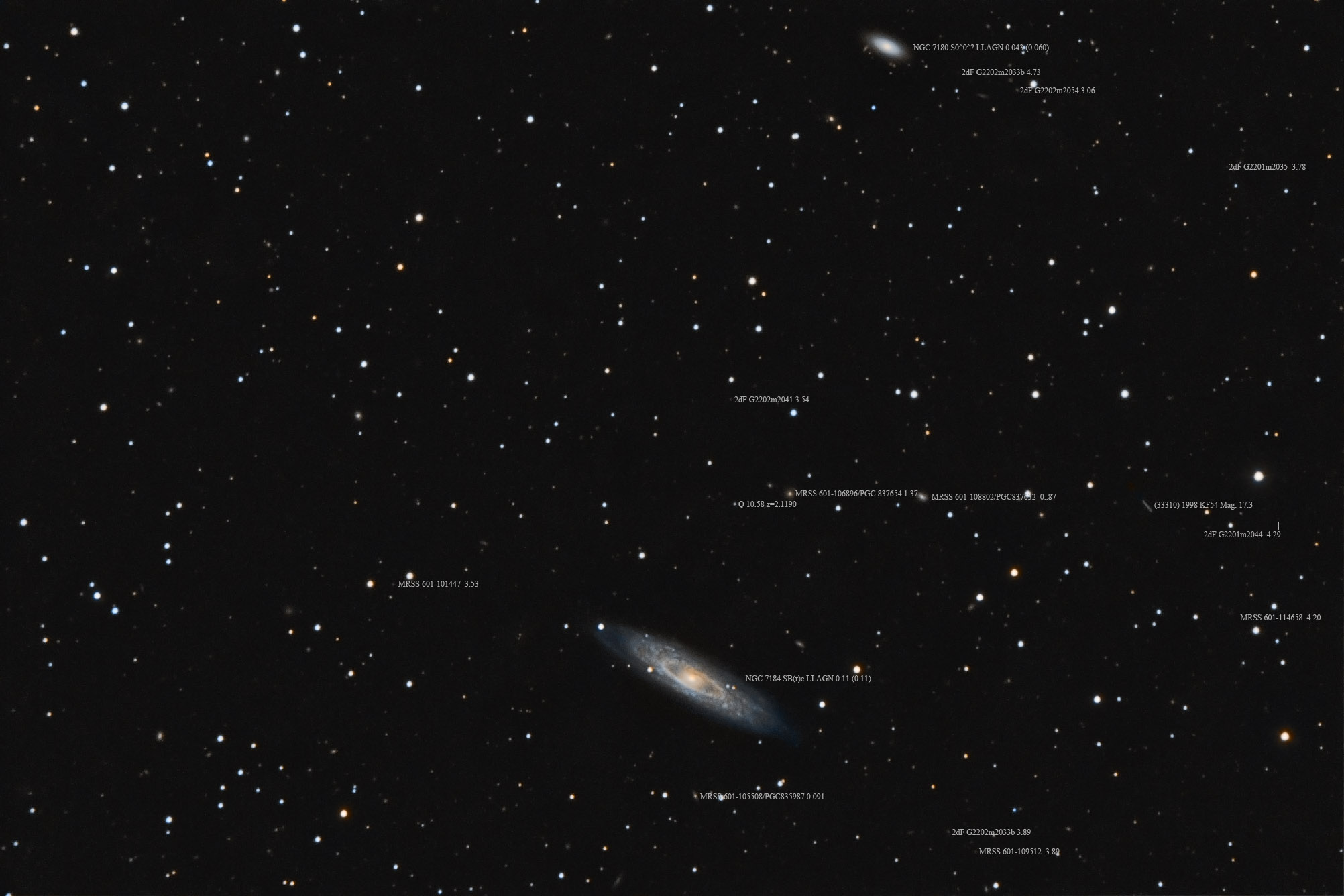