NGC 7242 is a very large galaxy that anchors the NGC 7242 group. It is about 250 million light-years distant. I can trace the plumes off each end of the galaxy out about 490 seconds of arc on the luminance FITS. That would translate to almost 600,000 light-years for its diameter. If true that\'s one huge galaxy. I suppose it is possible some of this is IFN or something else. Measuring the obvious diameter I get 334 seconds of arc. That is over 400 million light-years. No matter how you look at it, it is one big honker of a galaxy to use the scientific term. NED classes it as E+? and cD?. The NGC project says simply E. This would indicate they are unsure how much of its elongation is due to its nature and how much has been caused by tidal plumes created when it interacted and likely ate many members of the group. That is, much of its shape may be due to indigestion from overeating in the recent past. It was discovered by August Voigt in 1865, possibly in August.

IC 5195 is seen against the galaxy to the northeast. Its redshift puts it a tad closer which is likely the case. While NGC 7242 is rather dust free and thus somewhat transparent I doubt it is as transparent as it would have to be to see this small galaxy through it. I found no classification for this small, but rather bright, galaxy.

NGC 7240 to the southwest shows some hint of a tilted disk though its overall shape is nearly round. It is classed as S0-:. It was discovered by Édouard Stephan on September 26, 1873.

I need to do some explaining here based on questions I\'ve been getting. The S0 class was once considered it\'s own with no subdivision. It sits between elliptical and spiral showing characteristics of both. But as these were studied it was decided some were more elliptical than spiral and some were more spiral than elliptical. Thus two other classes were created S0- and S0+ respectively. The colon means there\'s some question if this is right or not. So this one is an \"early\" S0 though there\'s still some debate. Early comes from the now discounted idea that galaxies started as round ellipticals, which elongated turning into S0 galaxies which then developed arms which gradually got more widely spread out. While we now think this very wrong and to some extent backward the idea that a moving toward the elliptical from the spiral means a younger (early) galaxy and moving toward the spiral direction means older (late) is still used in terminology. The minus or plus sign is usually a superscript but that\'s a character that depends on what font set your computer uses and with this going to all parts of the world I left that out. Sometimes I\'ve used the ^ to denote superscript and a second one to denote the end of superscript. NED usually does this. Sometimes if the S0 is quite balanced then they use the superscript 0. Since doing that is also may not work with all fonts and to prevent the confusing S00 it is usually written S0^0 and if there\'s a question about this then you\'ll see S0^0^: or sometimes S0^0^? Another system, not used by NED, would make these three S0(1) S0(2) and S0(3). Seems easier but NED doesn\'t use it. Now that I\'ve got you all confused I\'ll move on.

To the upper right of NGC 7240 is IC 1441 classed as SBa? A tightly wound barred spiral, they think. It was discovered by Guillaume Bigourdan on September 25, 1889. IC 5192 is to the southeast making a nice triangle with the other two. NED has little to say about it, however. To its west is IC 5191 which has the NED class of S0-a. They were discovered by Edward Barnard on December 5, 1888. So as soon as you think you understand this they throw another curve. This is even later than S0+ but still not quite Sa. It can be written S0/a as well. The MCG catalog gives its coordinates as the same as IC 1441 in error. So if you wonder why I need two days to do these, its things like this that can really take up time figuring out who is right and who is wrong.

I\'ve listed a few other galaxies in the annotated image, some with redshift data, some without if they seemed likely to be members of the group. Most of the rest are anonymous in NED but for a few small IR galaxies in the 2MASS survey. 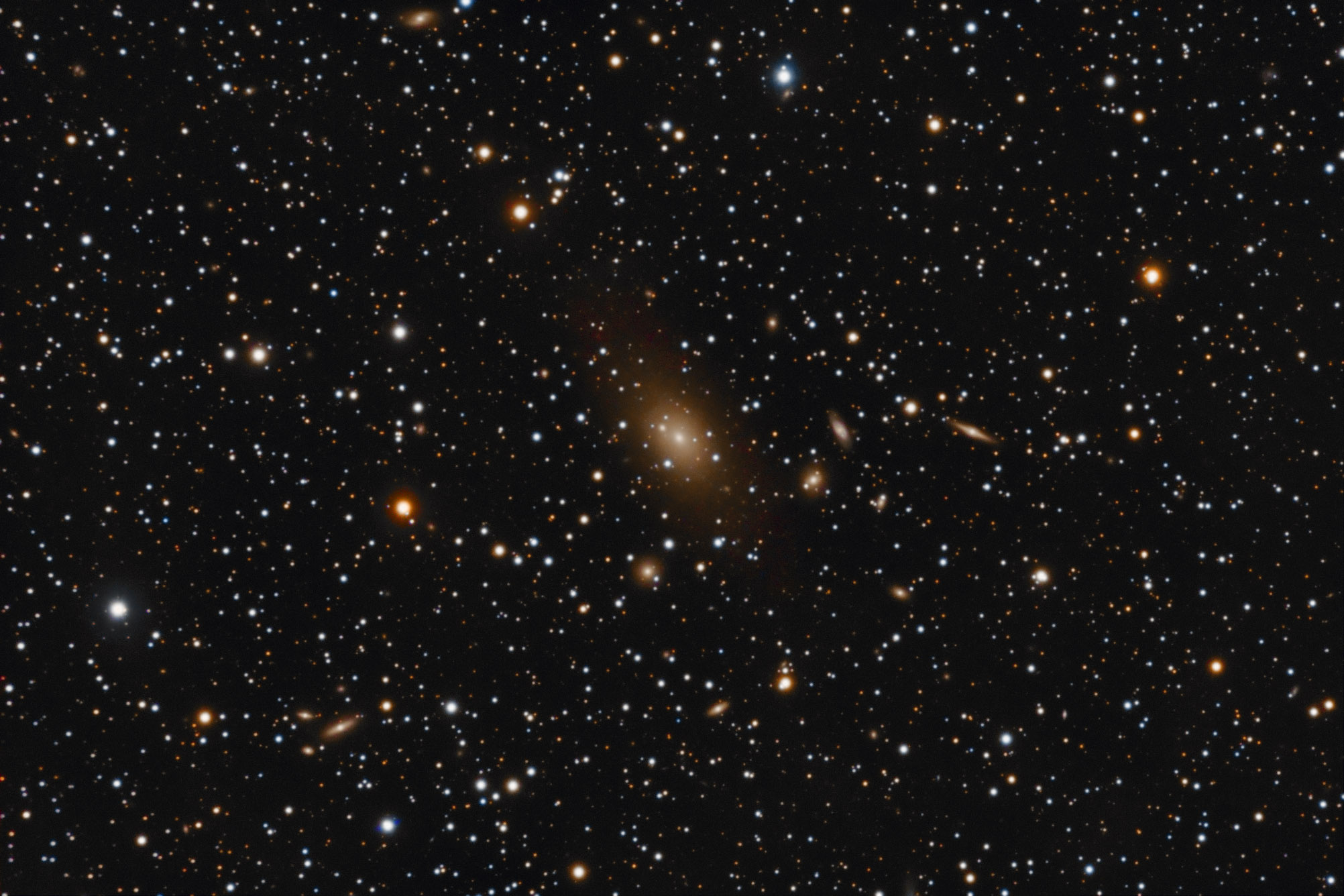 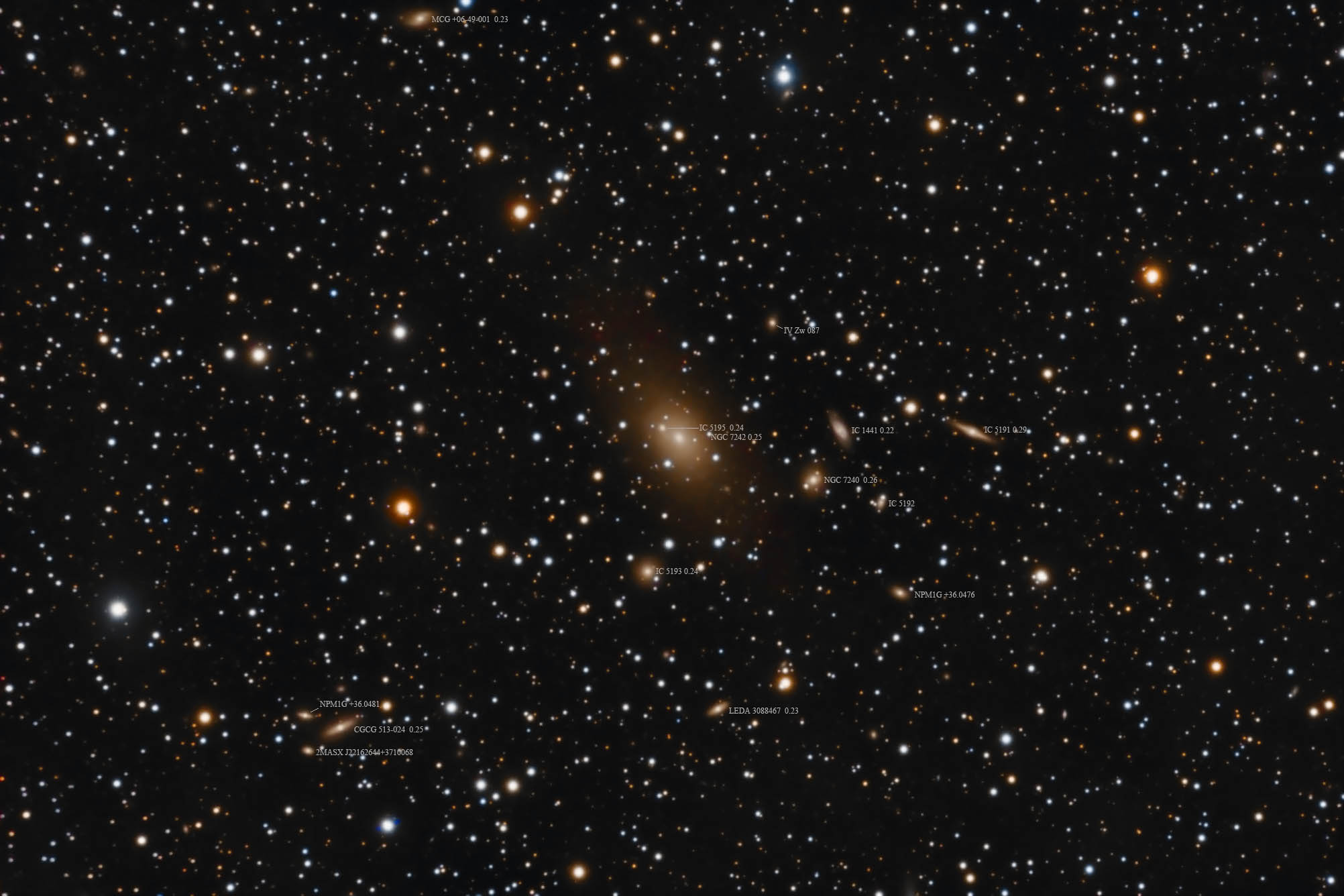