NGC 7303 is a very strange galaxy in northwestern Pegasus about 150 million light-years distant by redshift, 160 million by the median of Tully Fisher measurements. It is a LINER galaxy so has a very active nucleus. If the strange shape and all the activity is due to an interaction it is something it ate as it has no companions in its area that NED came up with. Though this area is not well represented in any database I have. It is very spider or crab looking which reminds me of a Shadow ship from the Babylon 5 SciFi series. NED lists it as S? while the NGC project says it is Sbc. It was discovered by Guillaume Bigourdan on August 24, 1884.

The only other galaxy in the field with redshift distance is the very open, two arm spiral UGC 12071. It is over a half billion light-years distant so unrelated to NGC 7303. Its color is strange with sharply defined reddish areas that change to blue without apparent reason. Makes the color look splotchy. As there\'s no hint of color issues any other place in the image I have to think it really is this way. At least until I can find skies suitable for retaking the color. Maybe next year.

The only other NGC listing in the field is for NGC 7304 which is considered as nonexistent by the NGC project. Even its \"discoverer\", Heinrich d\'Arrest, was unable to find it again. Some say it is the nearby group of stars but the NGC project says those are invisible in scopes even larger than that used to \"discover\" it in the first place. The UGC says \"Reinmuth identifies NGC 7304 with a star 3\' north following this galaxy.\" That would likely be the brightest of the stars near the position shown in my annotated image though NED itself says \"Three galactic stars. NGC identification is very uncertain.\"

Only 5 other galaxies are noted in NED. All from the 2MASS survey and none with much information let alone redshift data or magnitude estimates. I\'ve labeled them in the annotated image for what that is worth. One looks like a star in my image. It even looks like a star to me in the Sloan image. NED lists it both as a star and as a galaxy. Many other galaxies, some interesting looking, are seen in the field but I was unable to turn up anything on them as interesting as their appearance.

Transparency was poor and I kept trying over and over for usable luminance frames having grabbed color data on a night of poor seeing but sort of usable transparency. In all, I took some 16 luminance frames. Three were so poor I threw them out. But by including the rest I got better results than sorting further. Though if I used the four sharpest there was more detail in bright areas but fainter regions were totally lost. Using only the lesser images picked up faint regions but lost the detail. Best was use them all and miss the finest detail so that\'s what you get. This one is so interesting looking it deserves better. 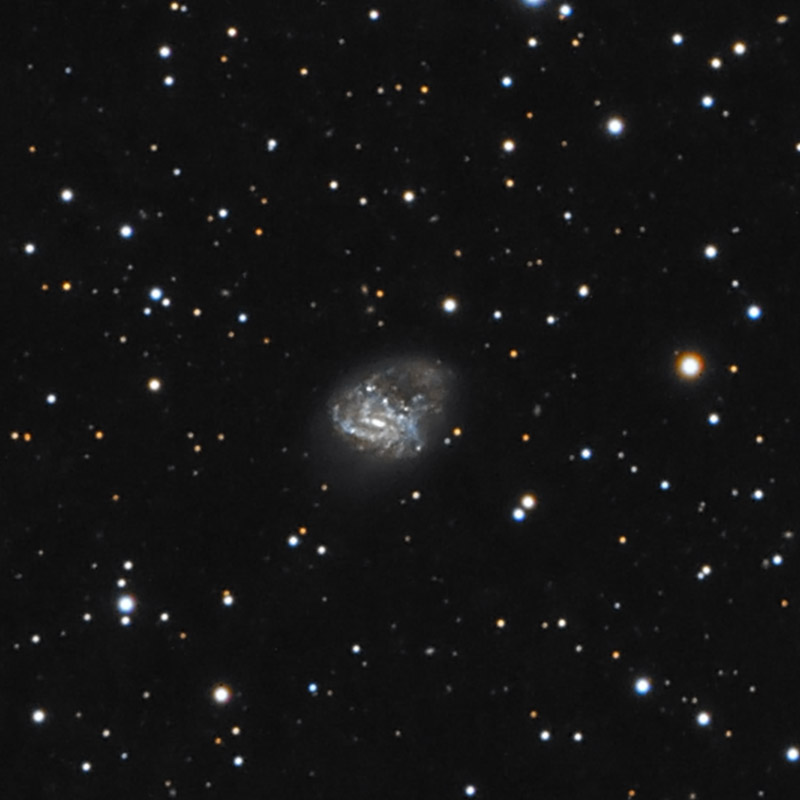 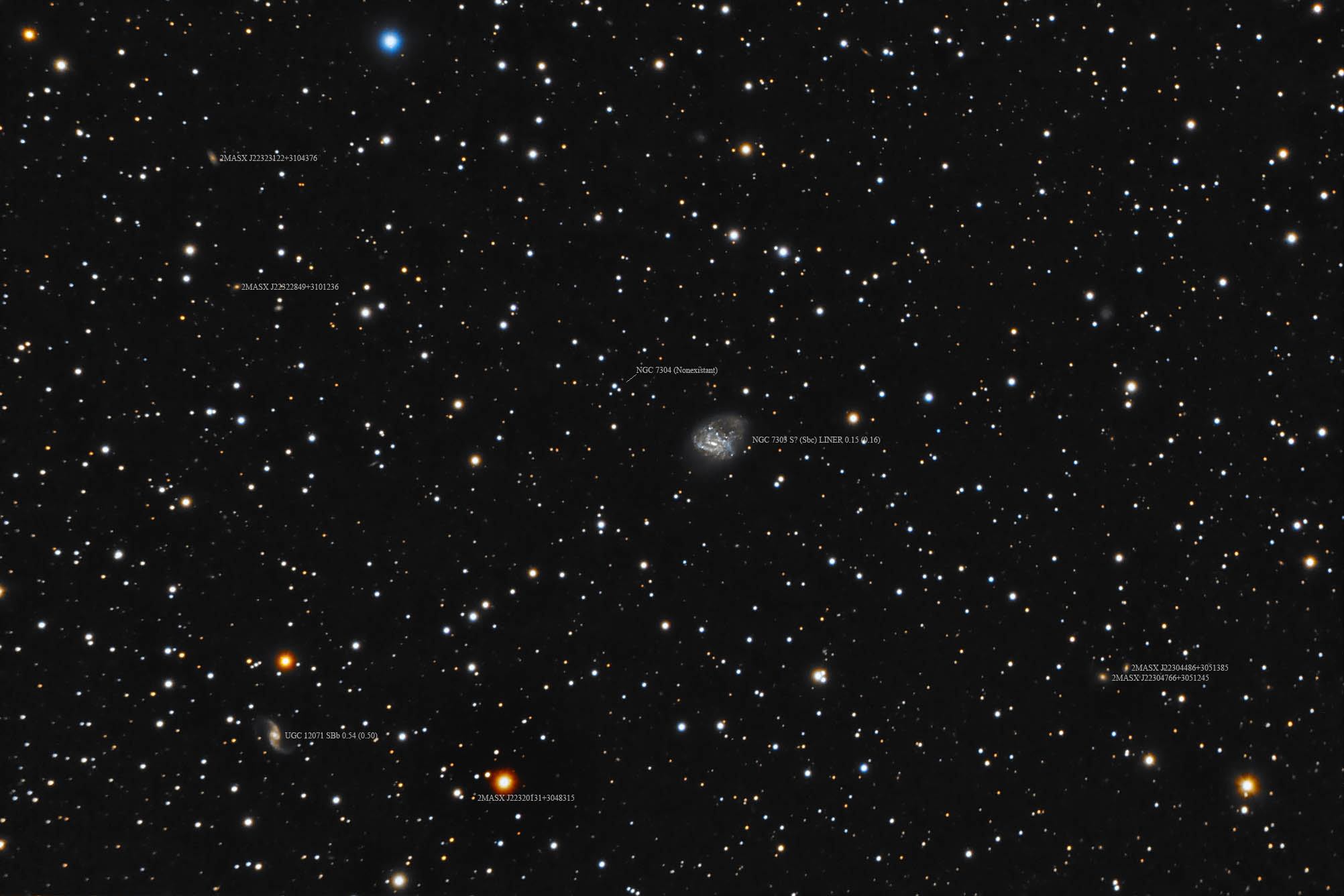 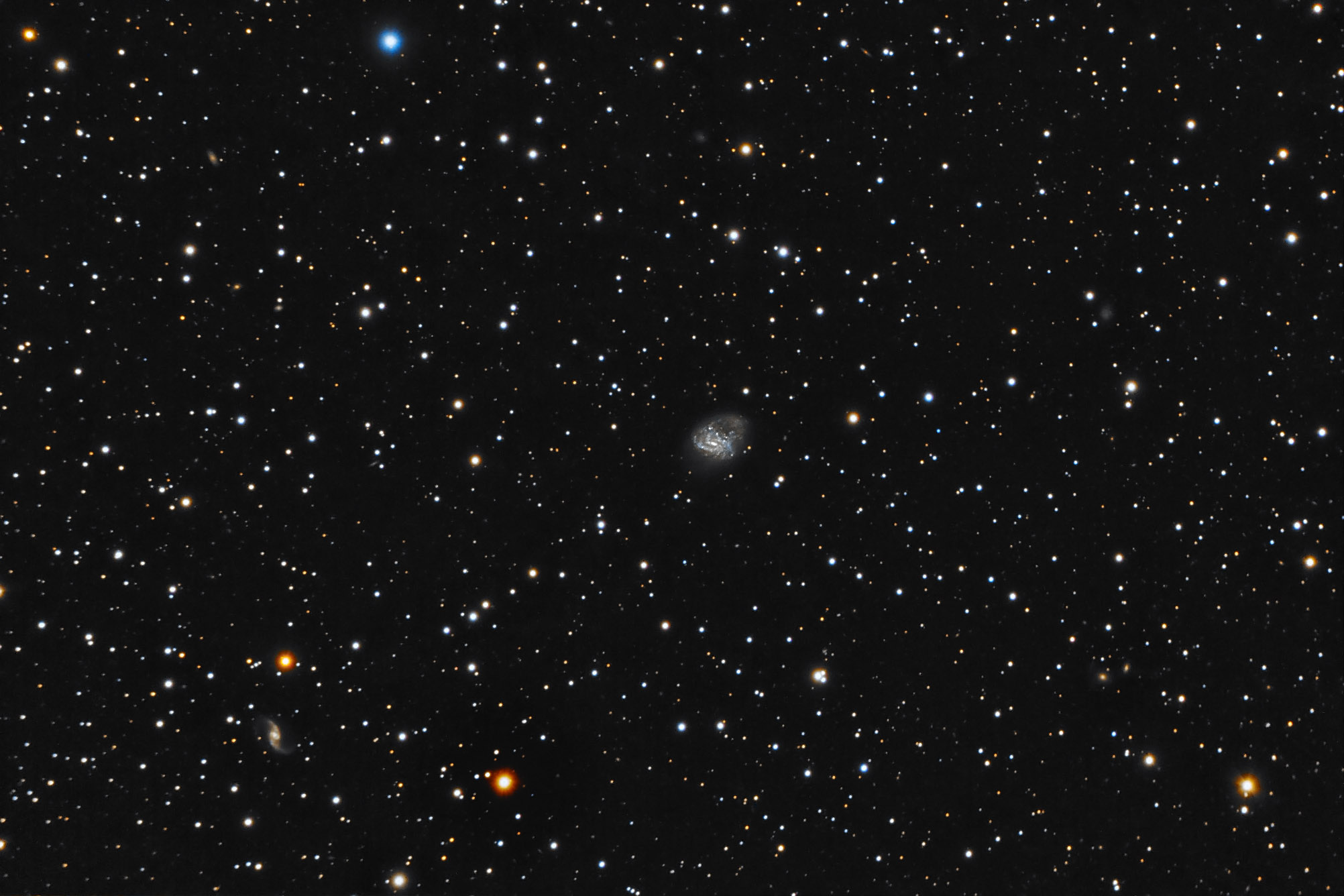