My target for this image was NGC 7592, a pair of colliding galaxies in northern Aquarius just below the Circlet of Pisces. When I saw Arp 223 could fit in the frame I adjusted to include it. Though I took it back in 2010, I missed NGC 7592. A mistake I\'ve regretted for all these years but have finally corrected. Unfortunately, while the night was great high in the sky down at -4 degrees I was looking through fog over the lake which greatly cut into my transparency and played havoc with color.

While I knew NGC 7592 was two galaxies in collision, I hadn\'t realized the huge faint plumes coming from them. I need to revisit this one on a better night with more time to bring them out. They are only hinted at in my image. What I was interested in was that it was a collision between a red and a blue galaxy making for a strong color contrast. The color data for the plumes was in the noise level so not to be trusted. Another reason I need to revisit it on a better night.

Some sources claim it is three galaxies but the third object is just a star cloud in the bright plume of the blue galaxy. Likely the result of massive star formation caused by the collision. One paper thinks the star formation is still going on deep in the cloud but hidden by dust from our view. If that was the case I\'d expect the dust to be strong in the 2MASS image and it isn\'t. The paper predated good IR instruments so this just shows how far we\'ve come in 50 years.

NED does list it as a triple galaxy one place but only because the catalog it is citing does. It knows it is only 2. The annotated image details the individual galaxies as well as a combined system. Red-shift is slightly different for the two but this is likely due to their orbiting each other prior to a final merging.

I suspect my color data was better then as I had less fog issues in that era. Also, the seeing looks to have been a lot better as well. You can read about that galaxy at the above link.

Just below NGC 7585 is a quasar. It is listed as being 18th magnitude but its position has a 10\" error circle that is centered just north and a bit east of the double star I\'ve put the label beside. The error circle does include both but only the brighter meets the magnitude estimate. But it appears red in both this and my prior image. Sloan\'s image shows it very white with the companion very red. But it uses spectroscopic filters that map red, green and IR to red, blue to green and near Uv to blue. That would indicate it strong in near Uv that I don\'t pick up. Still, it seems oddly red to me but nothing else fits.

There were quite a few asteroids in the image but many were lost to the fog I was imaging through. I can see four others in the raw FITS data but so far in the noise, I didn\'t try to pull them out. 5 did make the cut. The likely reason for so many is this one lies right on the ecliptic which passes right through the middle of the image inclined the same as the asteroid trails. Neptune was only about 7 degrees from this field when it was taken. Fortunately, it didn\'t photo-bomb the image.

There was very little on this field at NED with only one other distant galaxy listed with red-shift data. It is in the lower right. Again the position was poor and pointed between the two galaxies. Only the western edge of the eastern galaxy was in the error circle so that\'s the one I went with. Also, it meets the magnitude listed for it while the other is a bit too faint by my measurement. Still, I could be wrong. 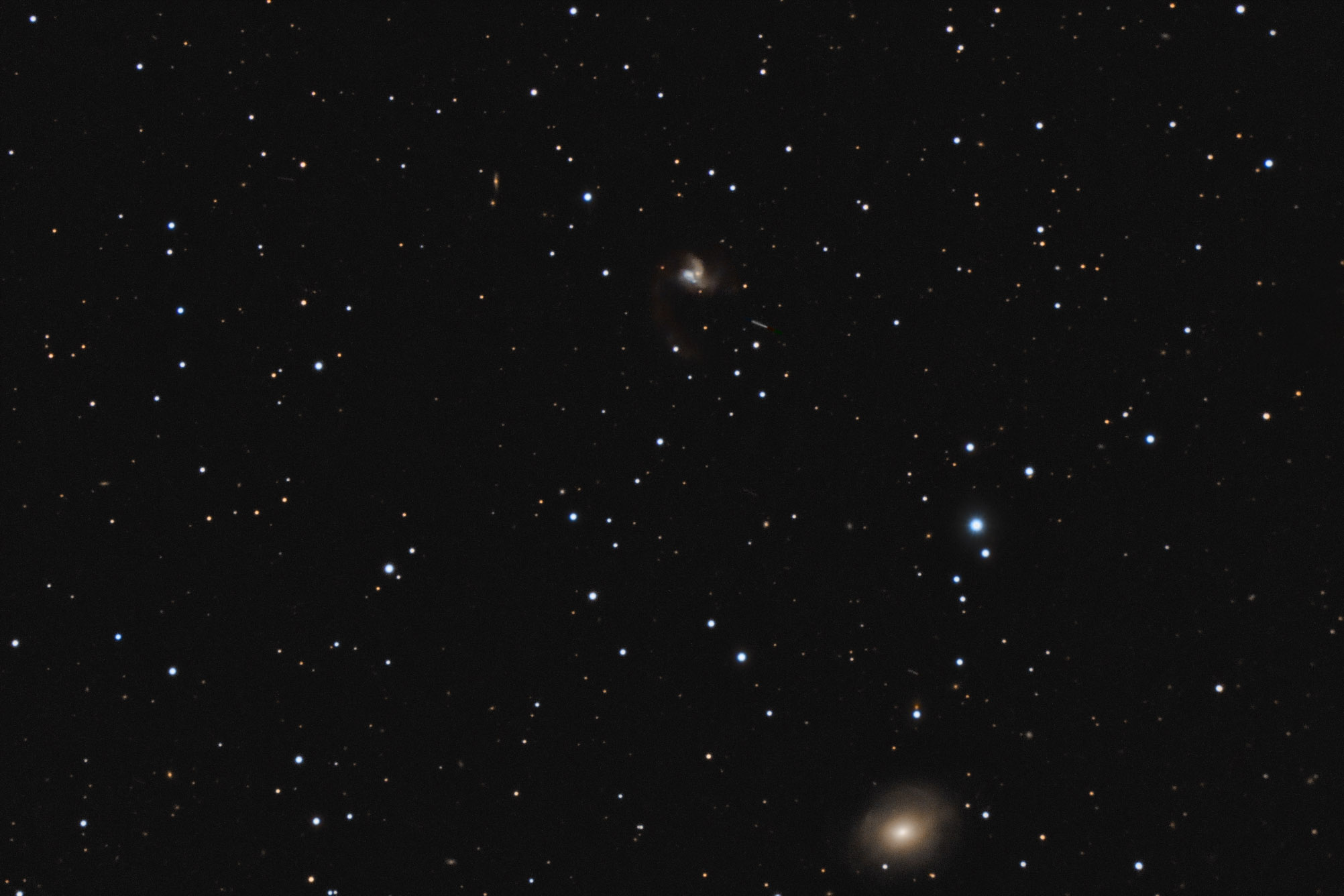 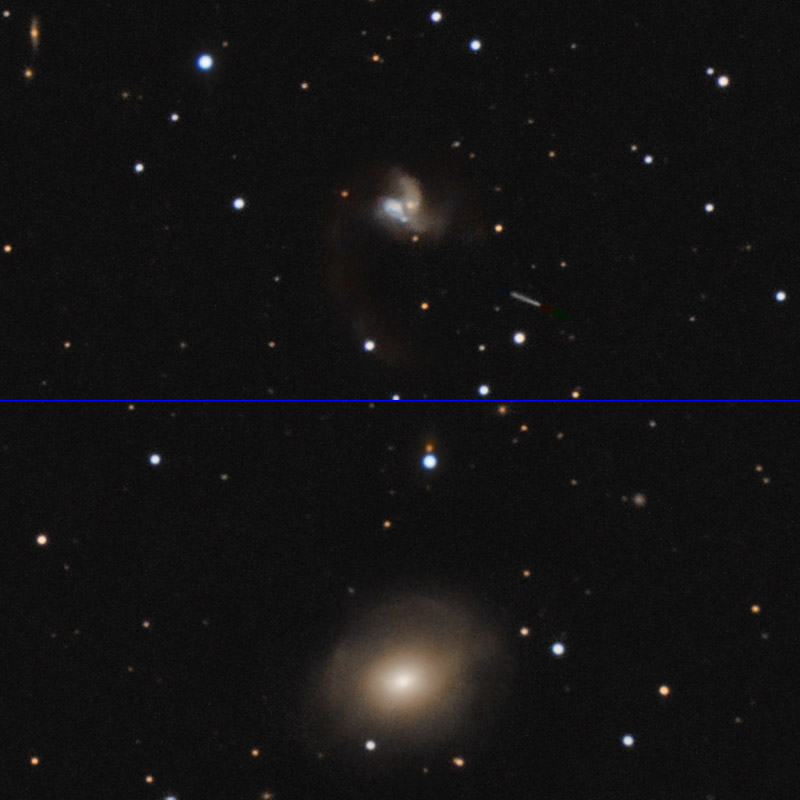 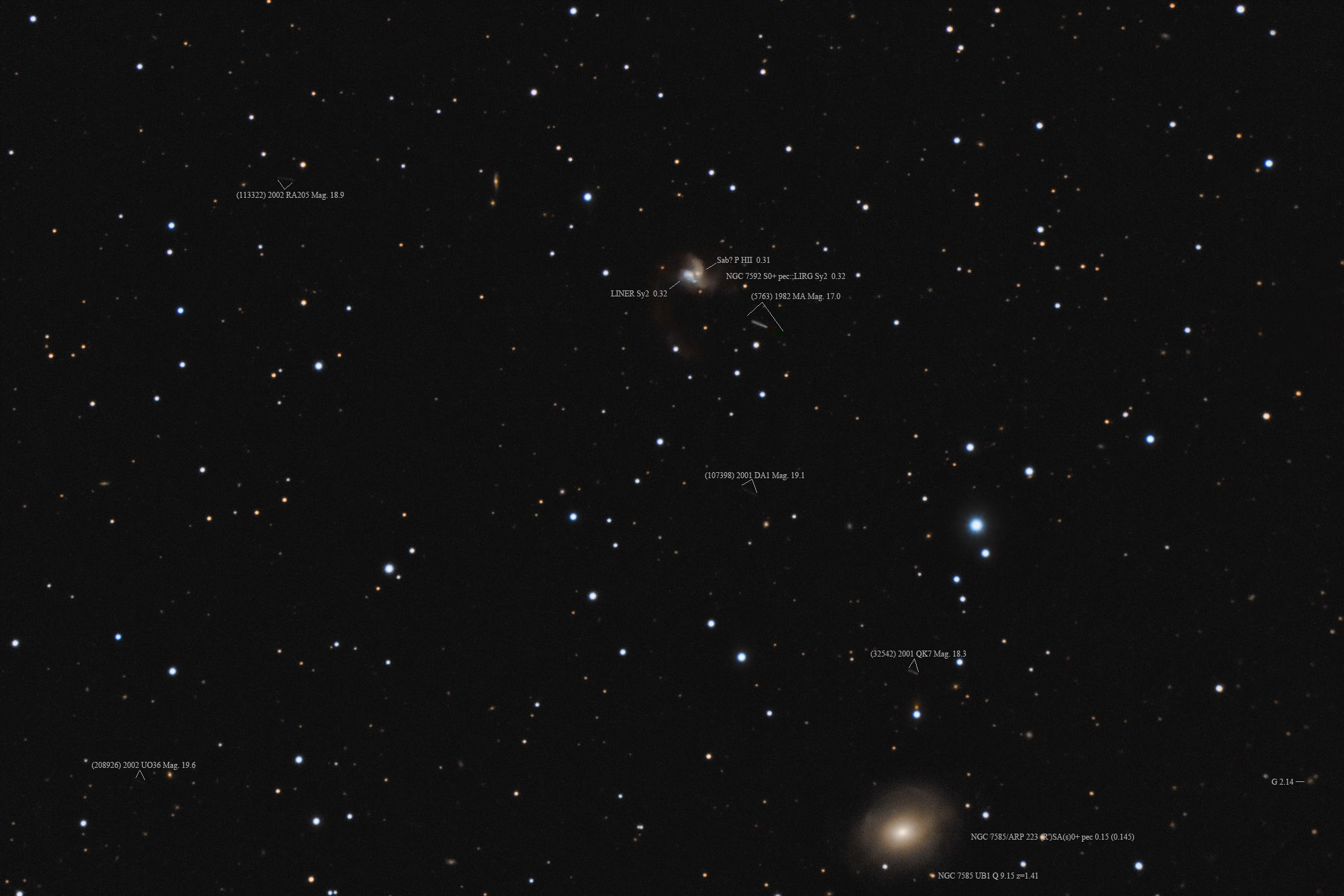 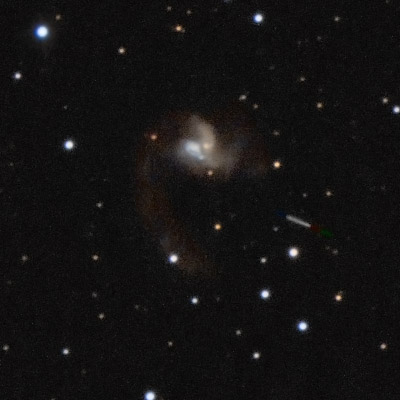