NGC 7656 is below my normal cut off as seeing down this low is rarely sufficient. The night I took this was no exception. It is so strange I had to try anyway. I tried several nights, this was the best of the bunch. It was recommended to me by Sakib Rasool who had this comment in his email: \"(E)ven Sherlock Holmes would have difficulty in deciphering the history of this bizarre deformed galaxy!\" It is located in the southeastern corner of Aquarius about 330 million light-years away. This case was first noted by Francis Leavenworth on October 9, 1885.

Several \"Sherlocks\" have tried over the years. NED calls it SO pec while the NGC project leaves off the peculiar tag. NGC catalog notes say: \"3 filaments - 2 in loop.\" Those are pure descriptions with no attempt at explaining what is going on here.

So bring on the Sherlocks. Latest paper I found says this:
This is probably, at least, a disrupted triple rather than an E + disrupted S. Merger in progress? The main body is E-like and shows boxy isophotes. The intricate series of arms is probably a result of interaction or dismemberment. We see compression of the isophotes in the main body on the side opposite the next largest component.
http://adsabs.harvard.edu/cgi-bin/bib_query?1992A%26A...259...43R

17 years before that in the VV catalog we see this pure description:
Unusual interaction. From N part extend three wide arcs, the two eastern ones almost forming a knot, in the northeast part of which three companions are found: 17 mag [N] at 0.4 arcmin, 19 mag at 0.7 arcmin and 18 mag [N] or star at 0.8 arcmin. The west arm is not very clear and does not connect to anything.

And that\'s about it. I\'m not even sure what are the three interacting galaxies. NED lists only two objects in the immediate area with a third a bit to the northwest that shows no hint of distortion but is at 320 million light-years by redshift. So a member of the same group at least. But doesn\'t seem to be the third member. The most likely candidate is the object to the northeast of NGC 7656 itself. My seeing was about 4 arc seconds FWHM but this object comes in at 8 which would not fit a single star. It is marked with a question mark in the annotated image. Thus it is likely a galaxy though not listed in NED nor is this field covered by the Sloan survey which cuts off at the very northern edge of the plumes. Close but no cigar and very frustrating. The object with the plume is listed but with no redshift, so it gets a name but a question mark for distance in the annotated image. This unknown object seems to be in the brightest part of the looping plume. It\'s possible the plume is due to either stars ripped from it or that it has ripped from NGC 7656 or both.

Only a very few other galaxies in the field have redshift data. So few I found it easy to include their names as well as distance. All appear to be members of the same group of galaxies.

Due to poor signal, this low in the sky the luminance channel is a combine of all LRGB frames rather than just the L frame. This cost some faint detail but greatly helped the signal to noise ratio. The asteroid trails were greatly reduced by this combine but are still visible at least. Also due to extinction this low I used 30 minutes for each color rather than my normal 20\'. The extinction still won I\'m afraid. It\'s rather bad in September when this image was taken. 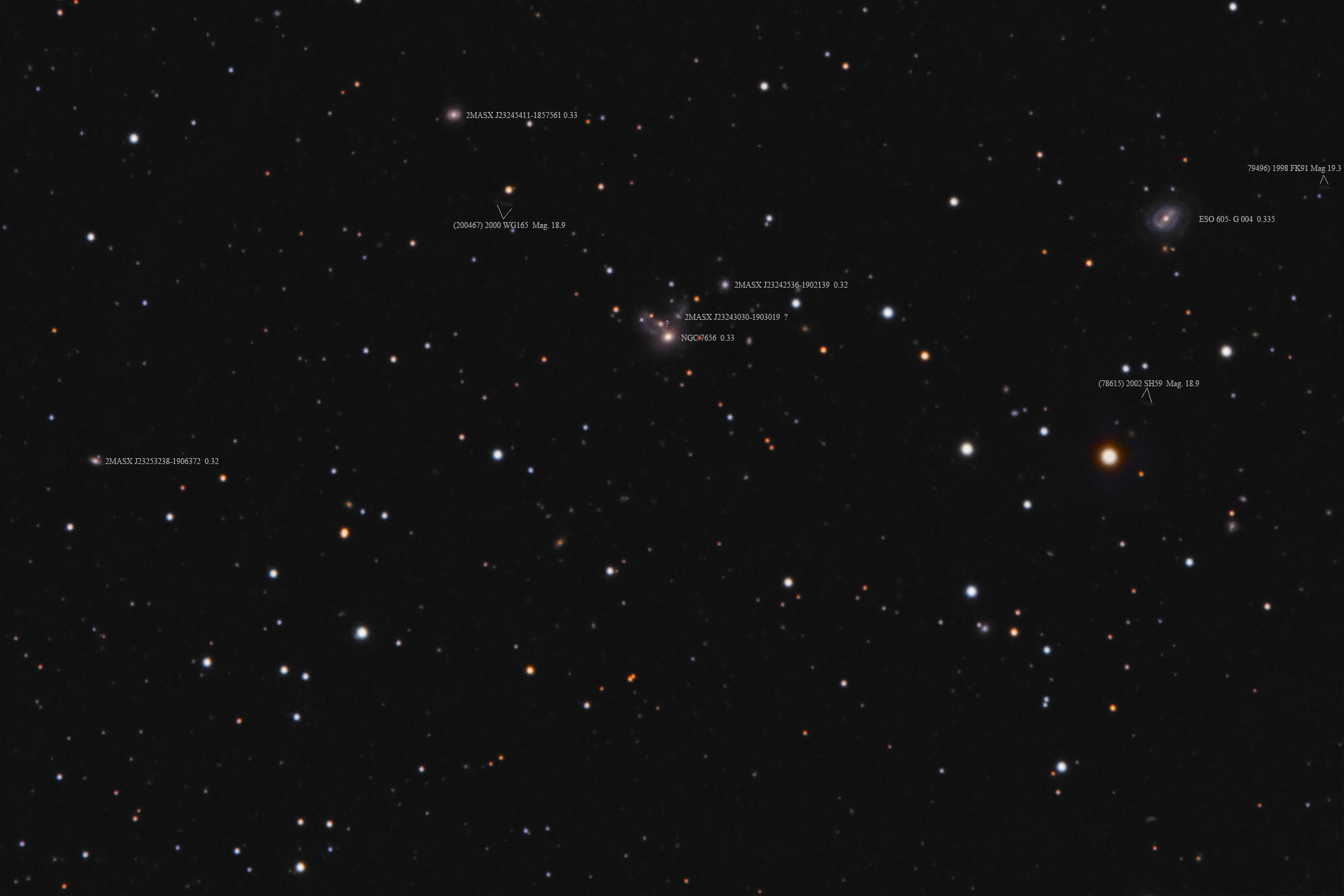 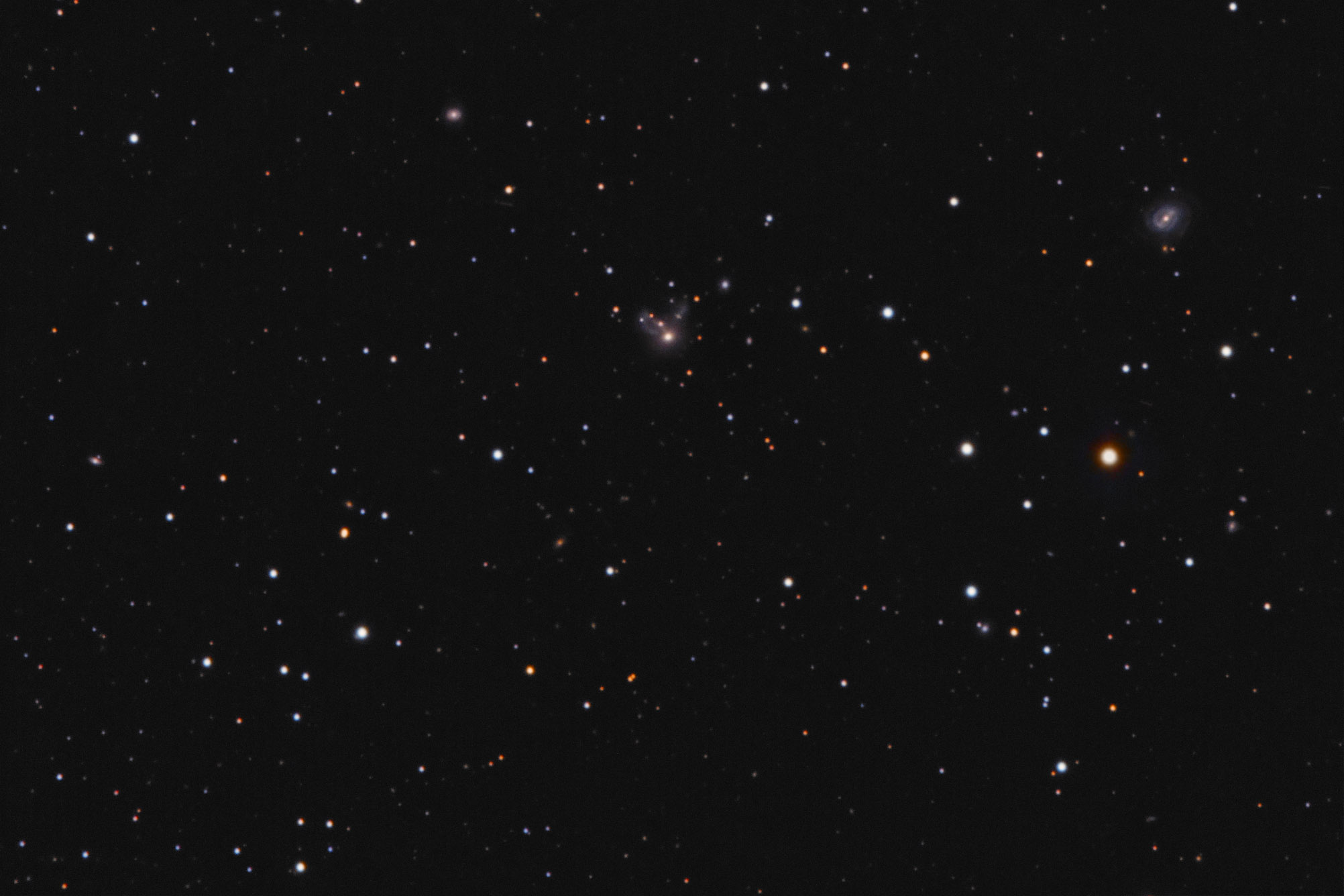