UGC 12578 is classed as SB(s)m pec by NED and SBSm by the NGC project. It contains many HII regions that show blue in my image due to all the super hot blue stars they contain. 5 of them are noted in the annotated image. They seem to fall into two different redshift classes. This makes me wonder if this highly disturbed galaxy is the result of a merger. The two different radial velocities being due to the two star populations. One HII region seems completely separated from the rest.

Adding to the confusion is that UGC 12578 is sometimes identified as NGC 7667. The NGC project says this is possibly true but considers it questionable. NED says: \"Identification as NGC 7667 is very unlikely.\" The Sky found it using the NGC number, however. There\'s a nice discussion on the NGC project under the NGC 7667 designation for those interested in this. Edit: For now the site is down, it may or may not be rebuilt. Many consider NGC 7667 as lost. What I\'ve identified as NGC 7667 may have been first seen by Gaspare Ferrari when looking for Biela\'s comet on December 21, 1866. His position is vague. The identification of NGC 7667 is also vague.

UGC 12589 is a pair of interacting galaxies with UGC 12589 Notes1 to the northeast. Both are highly distorted. NED shows the southwest galaxy as containing several objects it classes as galaxies rather than parts of a galaxy. I suspect they really aren\'t separate. Two of them I\'ve identified in the annotated image, one had no redshift. The other two had very imprecise coordinates centered on empty space with huge error bars. I gave up on trying to locate them. The southwest galaxy is classed by NED as SB(s)m pec. The companion UGC 12589 Notes 1 has a nice long tidal tail to the east. It is classed by NED as (R\')SA?(r)a? NLAGN. The last stands for Narrow Line Active Galactic Nuclei. Likely a left over from the interaction with its companion. NED shows other companions. UGC 12589 Notes 3 (not shown on the annotated image) is just the northeast end of the southwest galaxy. For it, NED has this cryptic note: \"Part of UGC 12589, or one of four interacting spirals.\" They can\'t decide apparently. UGC 12589 Notes 2 turns up a not found error at NED. Not sure why. The other, UGC 12589 NED04, has very imprecise coordinates centered on empty space with large error bars. I gave up on trying to locate it. The error bar for NED03 was so great I could only conclude it was possibly the northeast end. Don\'t quote me on that, however. Neither made the annotated image because of their fuzzy location data.

I processed the background far deeper than I normally do which makes it rather noisy. Nearly all the thousands of faint, apparently noise islands, are really extremely distant galaxies. I could have filled the annotated field with their distance labels as a surprising number had redshift data. Seeing that as not really accomplishing much I only identified a rather random selection chosen to spread them across the image rather than fill up a small area with labels. Though in two cases I found close pairs with virtually the same redshift so did label those. After finding some 4000 down past magnitude 25 identified in NED (My limit is about mag 23.3 depending somewhat on which color filter I\'m using), I was surprised to find one in the upper left not listed at all! I checked the Sloan data and it is clearly shown on their image. Just that NED never picked it up.

The image is also rare in that several quasars are far closer than some galaxies. One galaxy is over 8 billion light-years away, light travel time distance using NED\'s 5 year WMAP calculations. Another is listed at 9.7 million light-years! It is listed as an emission line galaxy rather than a quasar. It is surprisingly bright (magnitude 21.0 in green light) for an ELG. Could it be a still unidentified quasar? I can\'t imagine a galaxy that bright at that distance. It\'s labeled east of UGC 12589 along with its designation so you can look it up at NED. That\'s got to be one bright galaxy for me to see it that far away. A much fainter one at 10 billion light-years is nearby. The image is chock full of galaxies over 5 billion light-years distant by the same measurement. Most of the faint fuzzies in the background likely fall into this class as well. I know many of them do as I looked them up, just didn\'t label them.

The image contains two asteroids; (293027) 2006 WM62 at magnitude 21.1 is in the lower left corner. (167817) 2005 CY5 at magnitude 20.5 is one-third of the way between UGC 12589 and the other asteroid. Normally I don\'t show asteroids this faint, just noting they were in the raw FITS but didn\'t make it through processing a color image. This time, due to the tremendous number of faint galaxies in the image I did take the time to bring out the faint background objects. It takes a night of superior transparency and no moon to accomplish this, don\'t expect this to be a common occurrence. Especially how the weather has stunk things up the last year.

This is my last August 2011 image. I\'m now officially less than a year behind in my processing! 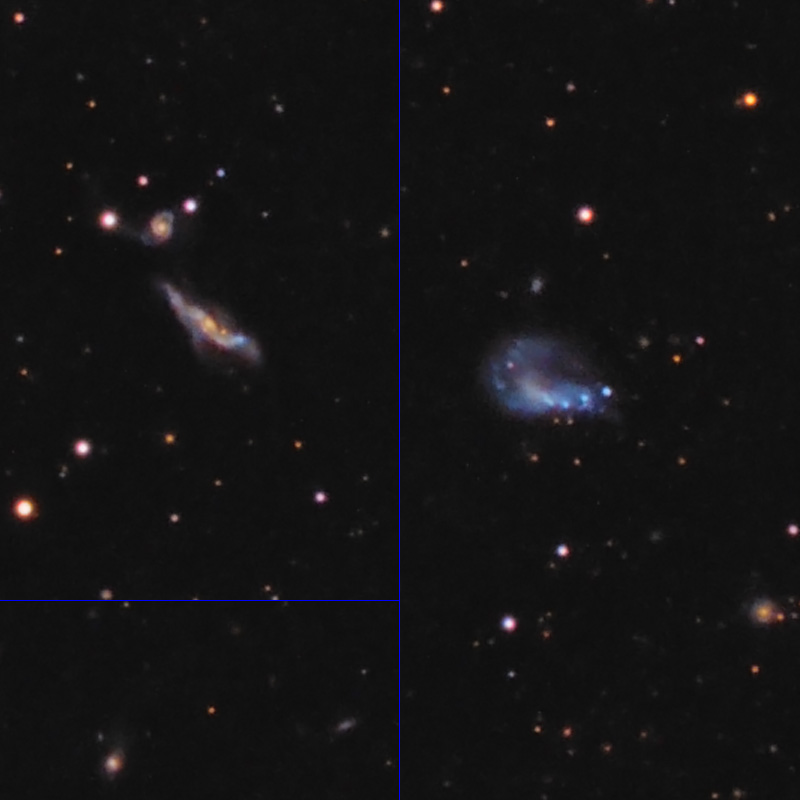 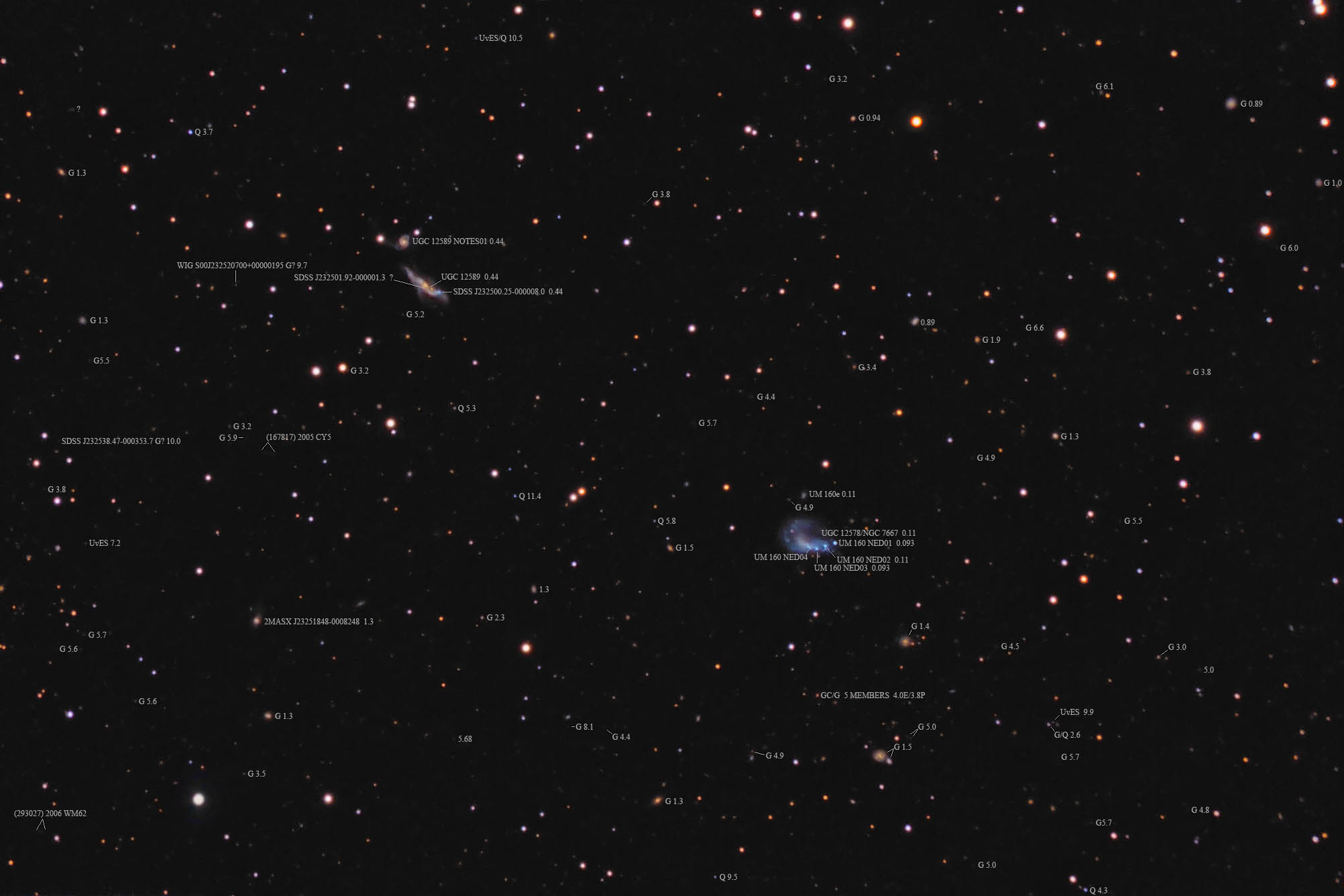 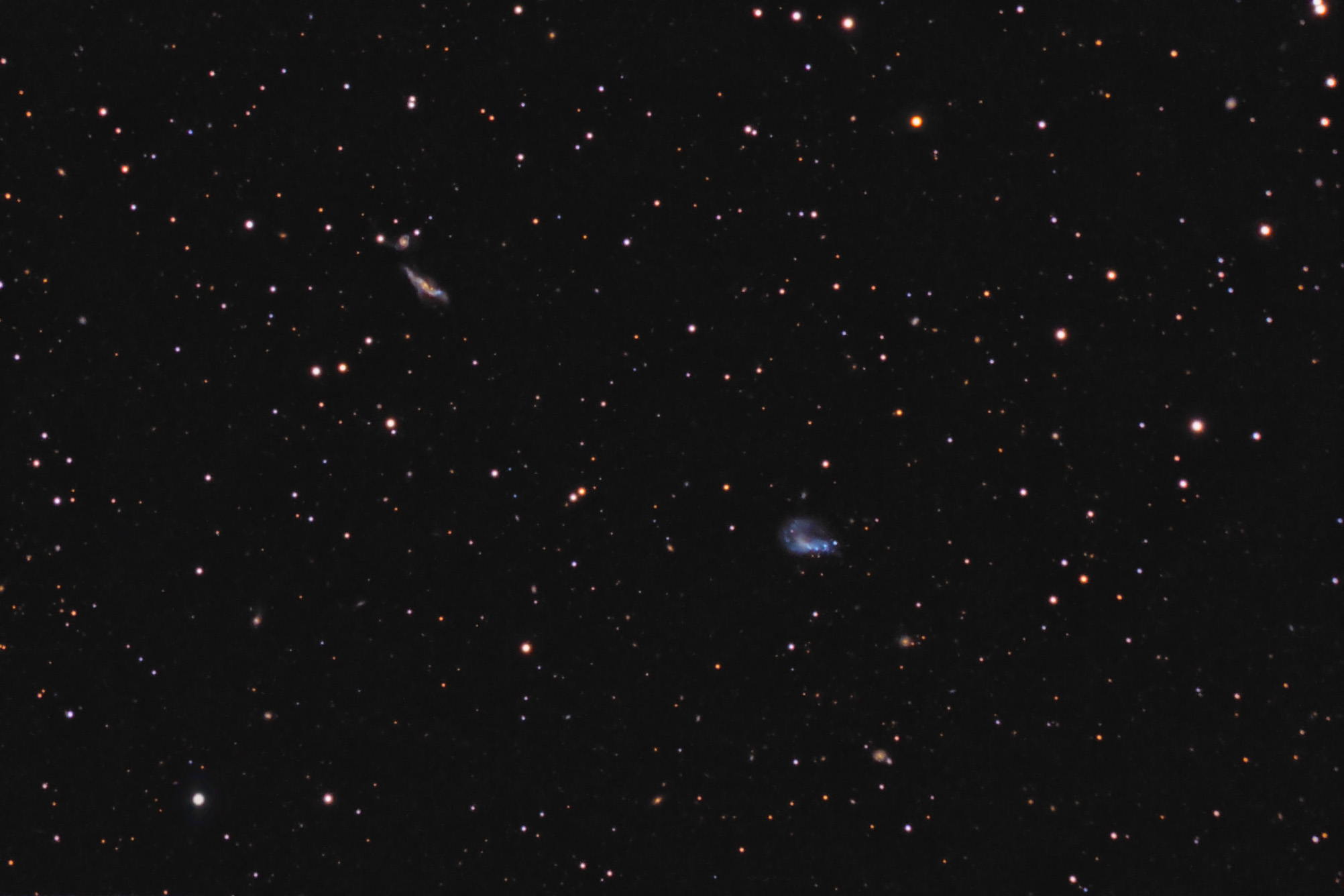