NGC 7686 is an open star cluster in Andromeda. It was discovered by William Herschel on December 3, 1787. Its Trumpler class is IV1p. That translates into a star cluster of widely scattered stars of fairly even brightness with a low star count. For those not familiar with this classification scheme the Roman numerals range from I to IV indicating how concentrated and easy it is to separate the cluster from the background. With I being a very obvious cluster that stands out with a high concentration of stars to IV which is scattered and difficult to tell cluster stars from background stars. The numeral ranges from 1 to 3 indicating how similar in brightness the stars are with 1 being very similar to 3 being a wide variation. The last letter tells if the cluster is (p)oor, (m)edium or (r)ich in stars. The cluster is listed as being 15 minutes of arc across so all of it is in the image.

Being such a poor cluster why did I take it? It is in the original Herschel 400 observing list and my system grabs data on these only when nothing better is in position. That means it might take one frame then a better object is now high enough so it moves to that better target. Eventually, sometimes years later I have enough on one of these to process it. That\'s the case here though I only had 1 color frame for each color. No satellite issues so I went with that one frame rather than wait possibly many more years to finish it. For star color one of each color is plenty sufficient. I take two because that makes it easy to remove satellites without cloning them out which I\'m very poor at doing without making it look very obvious.

My visual log from July 10, 1985 with my 10\" f/5 reads: \"Small, poor but tight cluster, mostly west of a 5.5 magnitude orange star that hides the cluster with its brilliance. Reminds me of a smaller, poorer version of NGC 2362 around Tau Canis Major only with an orange star at its core.\" I went on to note only 12 stars were seen I could say were cluster members. Not sure about where I got that \"tight\" description. I can\'t say I see that in this image. The magnitude of the bright star is a bit high as well. Not sure where that came from. There is an orange 5.5 magnitude star 1.5 degrees southwest. Could I have been on the wrong star? I don\'t see anything resembling a cluster around it however but I may have picked up the wrong magnitude value using the wrong star. I need a time machine to go back and ask myself what I was thinking 30 years ago. Dreyer\'s description from the NGC reads Cl, P, lC, st 7...11 which translates to cluster, poor, little condensed stars of 7th to 11th magnitude. In any case, the image is on the coordinates for the cluster.

Obviously, the field is filled with a wide variation of stars so where does this similar star brightness come from in its classification. Apparently, the bright stars in the image aren\'t true cluster members or aren\'t considered as such. I couldn\'t find a distance to the cluster. Wikipedia says 900 light-years, many sites like WEBDA and SEDS don\'t give a distance at all. I\'ve seen a wide range of values, usually without sources. Hipparcos data has the distances to the 4 brightest stars in the field. All are reddish stars. According to that catalog, the brightest star is magnitude 6.2 and a K5III star at 856 light-years, rather close to the 900 light-year figure for the cluster. The second brightest star at magnitude 7.7 and K0 class to the southwest is put at 1260 light-years. The orange star above it and a bit to the right two-thirds of the way to the top is magnitude 8.9 and K0III at 1221 light-years. Rather close agreement to the previous star. The only other star I found with Hipparcos data is the orange star directly above the brightest star at magnitude 9.51 and G8 (seems rather red for that classification) which is listed at 86 light-years. Star clusters, unless old are mostly blue stars so I assume it is mostly blue stars that form the cluster. But which ones? Also could one or two of the red stars be members. Probably not the two main sequence stars but the red giant ones maybe though their distance varies by more than 300 light-years meaning only one if either is a cluster member. Heck, I\'m not even sure there\'s a cluster here or just an asterism. Though there are some papers on variable stars in the cluster and one with only a title saying they surveyed F7 type and earlier stars \"around\" this cluster. Could that mean they can\'t identify true members? I found one paper on proper motion of stars in clusters but apparently while this cluster was one they looked to it didn\'t have usable data from Hipparcos. I already had run into that issue above.

So I still can\'t tell what is the cluster, just that it\'s in this image someplace. Most coordinates put it just a few seconds of arc east of the brightest star. Other than that you\'re on your own here. Maybe at a shorter focal length, a cluster can be seen.

Due to no need for high resolution I\'m posting this one at 1.5\" per pixel rather than my normal 1\" per pixel. 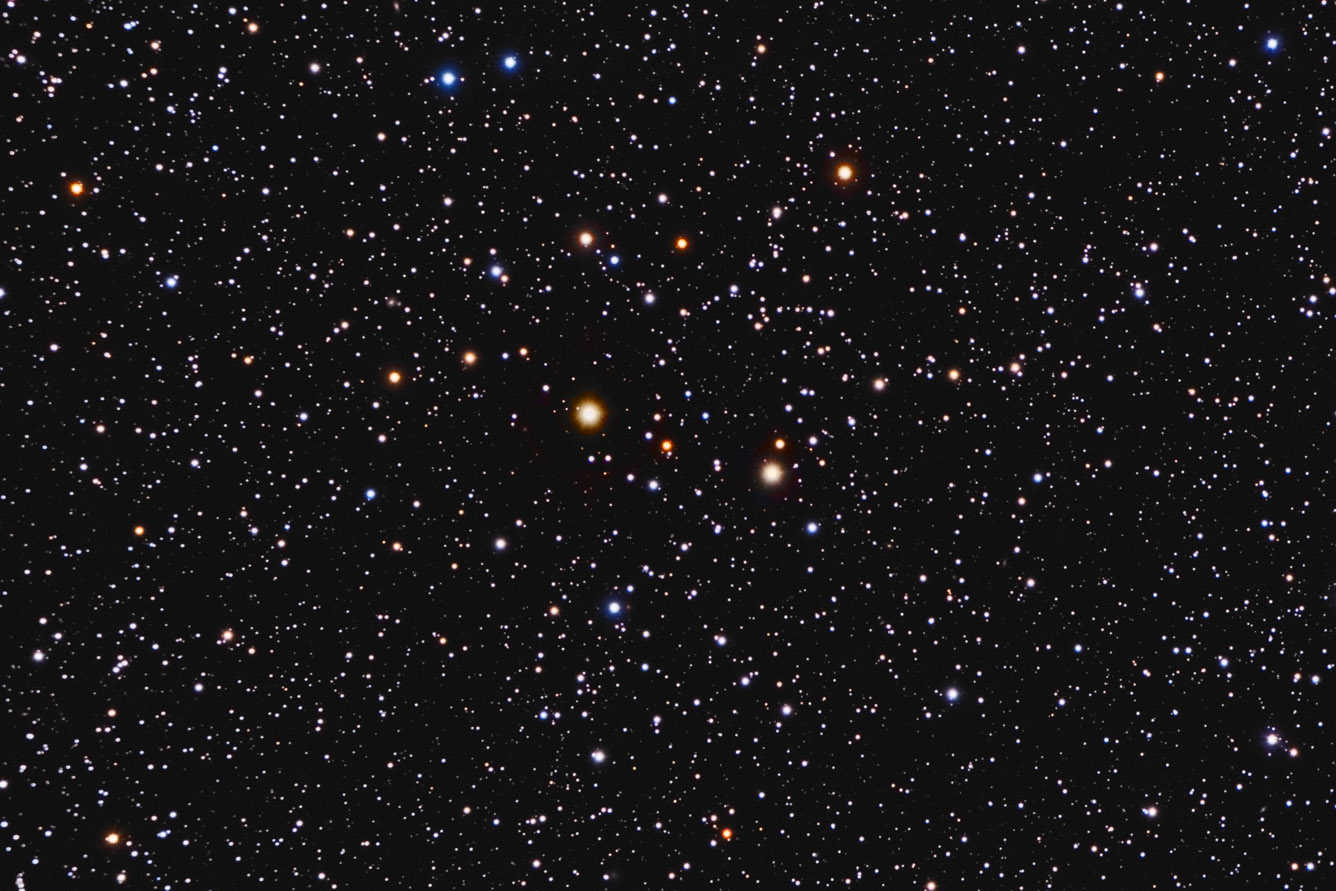