NGC 7694 is an irregular Magellanic galaxy in Pisces, about 90 million light-years distant. NED and the NGC Project both class it as Im Pec? The MCG catalog has a couple comments I can\'t understand. It reads: \"It is similar to M 82...\" Then adds: \"...merged with a star brighter than itself.\" How an irregular dwarf galaxy can be compared to M82 baffles me. Both are starburst galaxies but that\'s about all I see in common. It does have a bright off-center region that I suspect is the \"star\". I don\'t see it as anything but the brightest part of the galaxy. No other catalog makes reference to a star there that I could find except for the HST Guide Star Catalog which lists lots of things as stars that aren\'t. It does the same for NGC 7695, the companion to NGC 7694. So it is worthless for this purpose. The HST hasn\'t imaged the area so that can\'t help either.

I included this one on my list for its irregular shape and lots of HII regions that show as blue blobs in my image. It is also a strong IR emitter being in both the IRAS and 2MASS catalogs so there is a lot of star formation going on that is hidden by thick dust. Its the dust warmed by these new stars that likely accounts for the IR radiation.

Its companion is NGC 7695 which is classed as cE2? Pec? by NED and S0 by the NGC project. Quite a disagreement. The cE in cE2 means it is a compact elliptical galaxy and the 2 means it is somewhat elongated. Its core is elongated about as I\'d expect for an E2 galaxy but it has an extensive even more elongated halo. This is what likely caused the S0 class by the NGC project and the Pec? label by NED. I won\'t try to guess who is right. Since they use different classification systems both may be \"right.\"

More important is whether these two are interacting. The massive star formation of NGC 7694 could be due to other factors but it is often caused by interaction so it\'s quite likely they are interacting as they have very similar redshifts. A compact galaxy holds its stars quite tightly which results in little distortion unless it is involved in a direct hit with another galaxy. Just passing by wouldn\'t cause a lot of distortion but could cause the larger, slightly non-symmetric, halo we see around NGC 7695. An irregular galaxy has a loose hold on its contents so can be greatly affected by a close encounter.

I wasn\'t going to make an annotated image but then I saw there were 5 asteroids, 4 that were too faint to point out without annotation and a few galaxies were in NED with redshift information so I decided to make one anyway. In doing so I found one galaxy, WIG R00J233224443-02450563, with a redshift of z=1.110560 which puts it at over 8 billion light-years. That is the WiggleZ Dark Energy Survey. It tends to list very high redshift galaxies. Makes me wonder if these are quasars rather than galaxies that I am seeing. Or is it just a very bright but normal (for one that far back in time) galaxy I\'m picking up. It is in the right side of my image and labeled with its magnitude as well as distance using NED\'s 5 year WMAP calculation. For more on the WiggleZ survey see: http://wigglez.swin.edu.au/site/ The page says it covers galaxies with a redshift of 0.2 to 1 yet this one exceeds 1 though not by a lot. For more on the survey including where the name comes from see: http://www.science.org.au/nova/115/115key.html

It seems most asteroids I catch in my images are moving in retrograde motion. These are the exception as all are moving in prograde that is to the east (left). 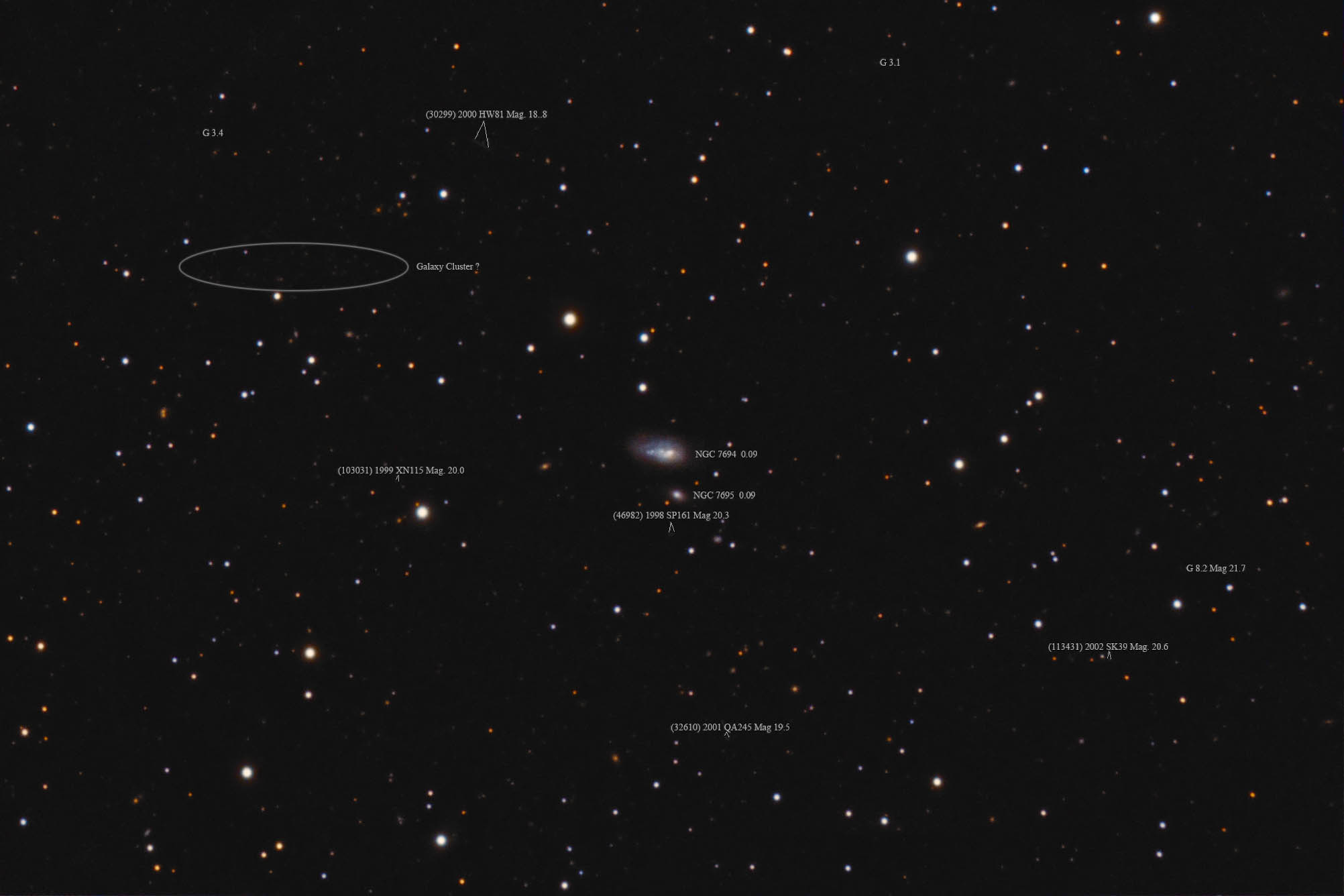 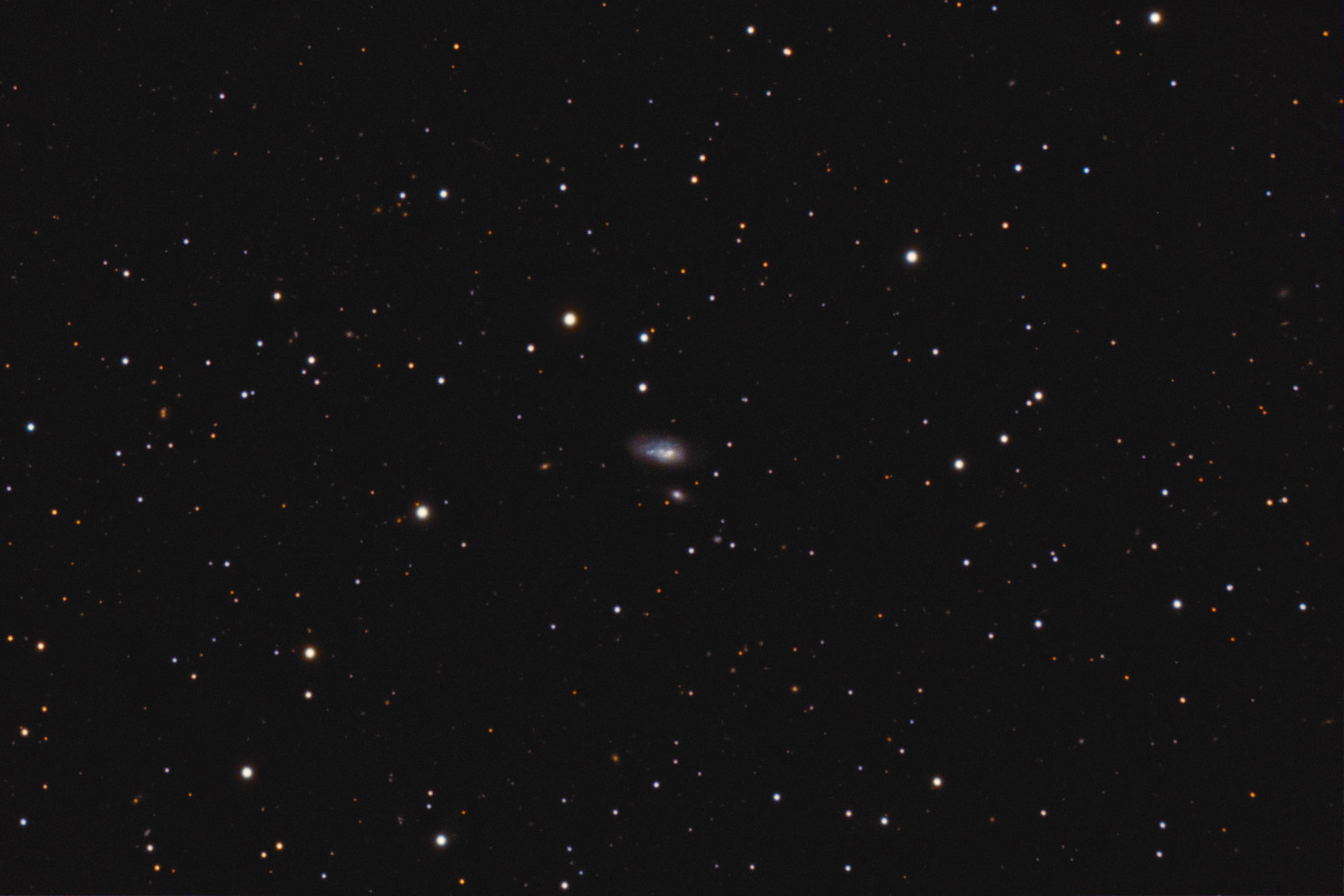 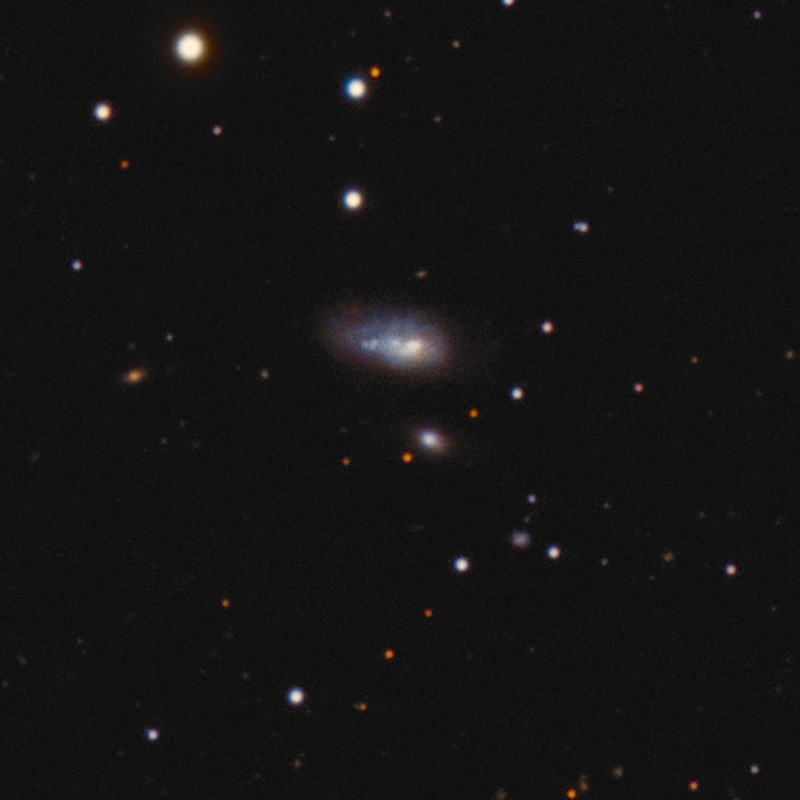